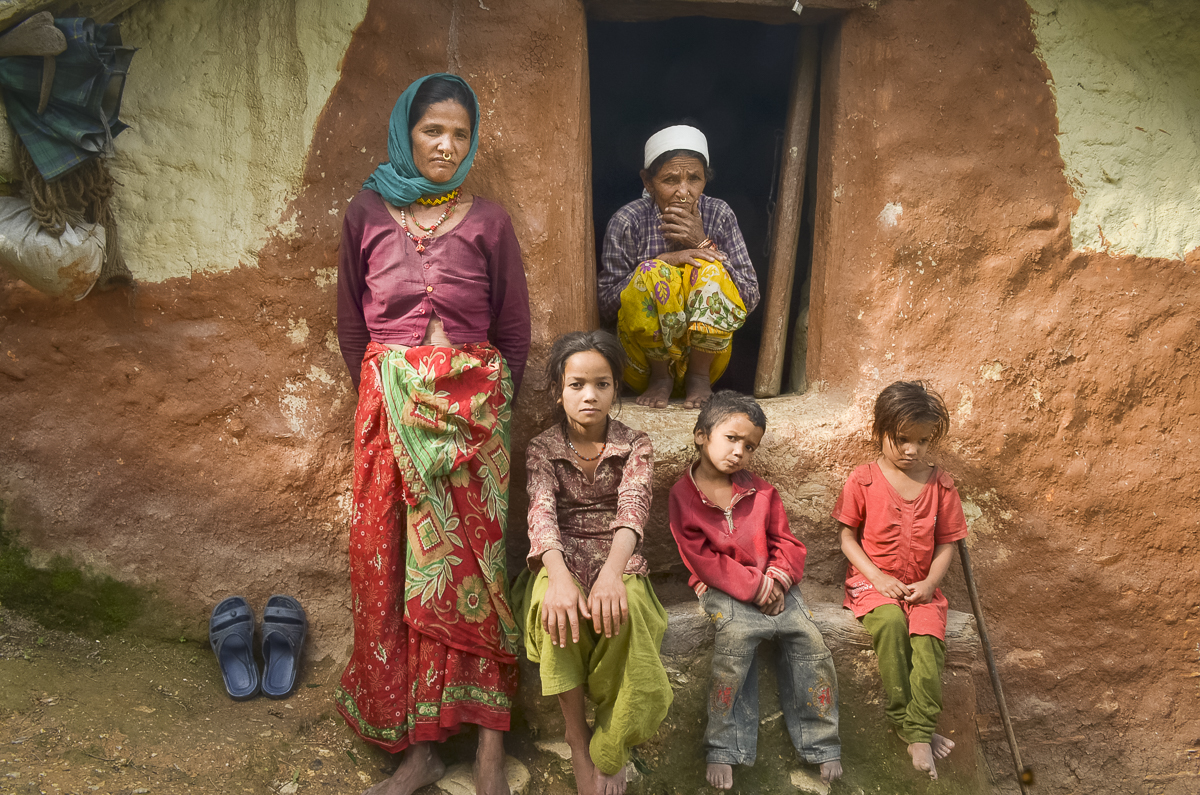 BASULING, NEPAL — The mountainous village of Basuling, in Nepal’s far-western Baitadi district, appears picture-perfect. Mud and stone houses dot the mountainside. Cows and goats, chained to stakes to keep them from wandering off, graze outside homes.

The image of tranquil rural beauty is misleading, says Jayram Lohar, 40, a ward coordinator in the village. There’s no electricity or potable water in the village, and the nearest access road is a two-mile hike through the mountains.

“The village is stuck in the Stone Age,” he says. “There isn’t any regular source of income. There are 10 to 12 children in a home.”

When there are so many people in one family, everyone, including children, needs to work, Lohar says.

“That’s why children are not interested in studying,” he says. “Barring one or two, nobody in the village has completed Grade 12.”

The number of school dropouts is high, Lohar says. This is a common scenario throughout Baitadi district.

Global Press Journal reporter Kalpana Khanal traveled to Nepal’s Baitadi district, a remote area that hugs Nepal’s western border with India to discover what life is like for people there. She found lush hillsides and picturesque communities, but also extreme poverty.

This story is one of three GPJ reported from Baitadi district. Read our story on child marriage here. The third story, on migrant workers, is forthcoming.

In 2013, the villagers worked together to build a school in Basuling, hoping it would be the start of a regular education for their children, Lohar says. A Japanese organization donated 200,000 rupees ($1,881) for building material, and the villagers contributed their labor to build the simple two-room school.

The Shree Daada Baag Primary School holds classes up to Grade 2, as there is no space for more classes or money to pay teachers and buy textbooks.

There was no money for furniture, either, Lohar says, so students sit on the floor. Two volunteer teachers use any materials or tools they find.

“The government has announced free education up to Grade 10 and allocated millions of rupees,” Lohar says. “But how can they get free education when there is no school in the village?”

About 31 percent of all Nepalese are illiterate, according to the 2011 census.

The same census found that while 39 percent of the literate population completed primary school education, only around 10 percent completed a school leaving certificate, the university-qualifying exam in Nepal.

In Baitadi district, the dropout rate was higher, according to the census. Nearly 48 percent of the district’s literate population completed primary school, but less than 6 percent completed a school leaving certificate.

Baitadi district had 925 schools in 2011, according to a Ministry of Education report. About half of these were primary schools.

The lack of access to education is forcing the next generation to live in poverty, Lohar says.

“This is why rural life has not changed,” he says.

Kalpana Khanal from GPJ’s Nepal News Desk spoke with people in Basuling about education and what it means to them.

Dhirendra Mahar, 23, weaves bamboo baskets for a living. It is his father’s job, and it was his grandfather’s job, too. And it’s a job Mahar hoped he would never have to do.

He worked hard to complete his secondary education, walking two hours each day to school. When his mother died, he began to care for his four younger siblings, the youngest of whom was just 1 year old.

But even then, he didn’t stop attending school. 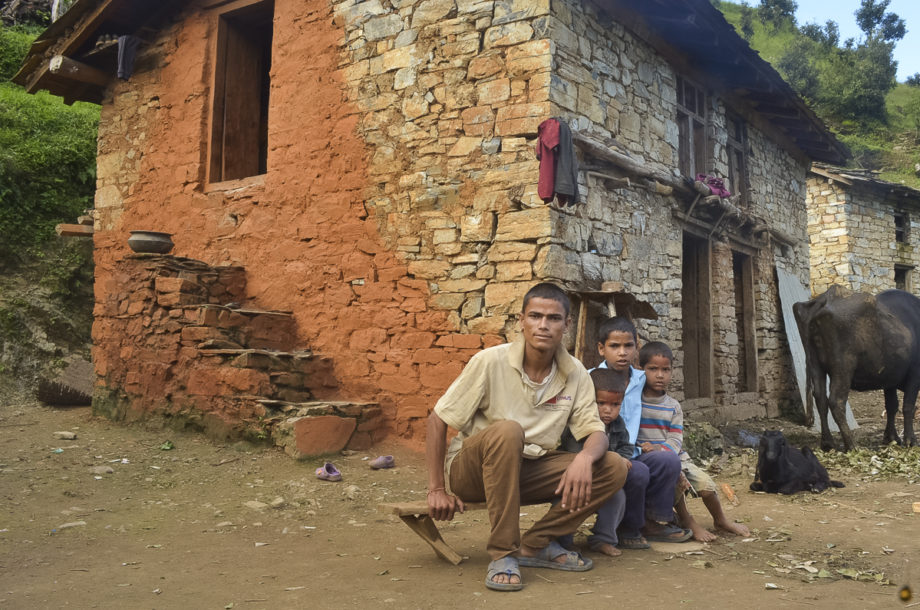 Mahar completed his Grade 12 exams, but he couldn’t find a college that he could afford. Instead of continuing his education, he got married. His younger siblings needed a mother, he says, and his new wife filled that role.

Mahar applied for many jobs, including to join the Nepalese Army. He borrowed 30,000 rupees ($282) from neighbors to travel to his recruitment interviews. But nothing worked out. He believes he was rejected because his family has no connections to high-ranking officials in the army or the government.

“Everywhere, people favor relatives instead of merit and capacity,” he says. “My father knows nobody.”

In addition to weaving baskets, Mahar works as a laborer in nearby villages. In a good month, he earns about 4,000 rupees ($38). He’s resigned to a life of poverty.

“My life will become like that of my father,” he says.

Mohonya Mahar, Dhirendra Mahar’s father, stayed in school until Grade 2. Now, he’s not convinced of the value of education.

“What is going to happen if I study? If I work, I can get at least two meals a day to eat,” he says.

Even though he dropped out of school, he has raised a family through his work, Mahar, 45, says.

“For villagers like us, work is more important than education,” he says. 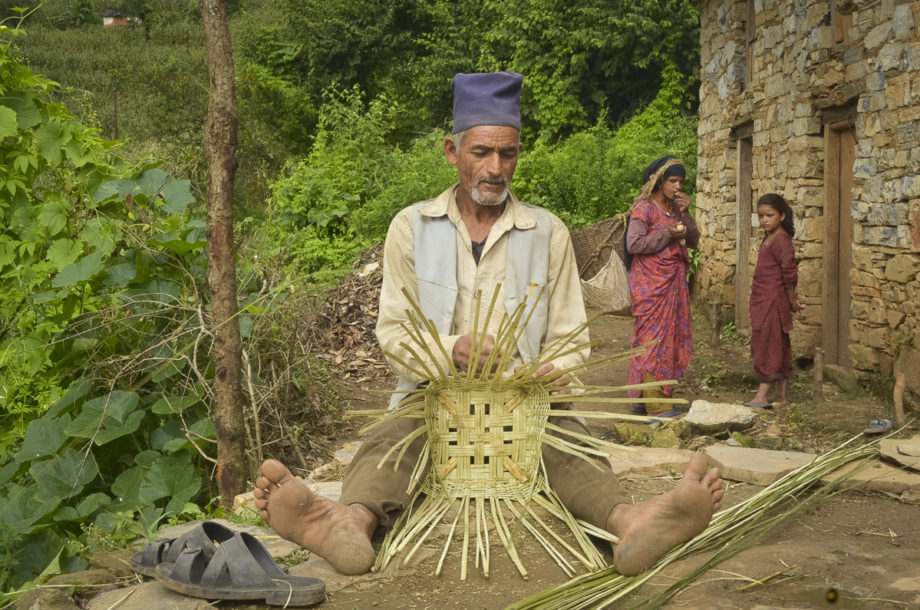 Mohonya Mahar, 45, weaves a bamboo basket. He earns a living making baskets, as well as helping to build homes and other structures. Mohonya Mahar doesn’t believe an education has much value.

Mahar is paid for his work, including weaving bamboo baskets and helping build and repair homes, in corn, millet and other food crops grown or purchased by the villagers.

The food and money he brings in supports his five children and daughter-in-law, he says.

Mahar says his son, Dhirendra Mahar, completed Grade 12, but it didn’t lead to a better life. He never found a job, he says.

“What’s the use of education?” Mahar asks. “If he had started working since childhood without wasting time in studying, there would have been some more earnings.”

No one in Bindu Mahara’s family has attended school.

Bindu says she has seen girls wearing uniforms – green skirts and blue shirts – but she doesn’t know what happens at the school they attend. She lives with her mother, grandmother, older sister and younger brother. Her mother and older sister clean houses and cattle stalls and cut grass for livestock. Bindu’s mother, Dura Mahara, 43, left her husband because, she says, he often got drunk and beat her.

“It’s hard to make a living from working in other’s houses,” Mahara says. “Eating delicious food and studying have become only a dream for my children.” 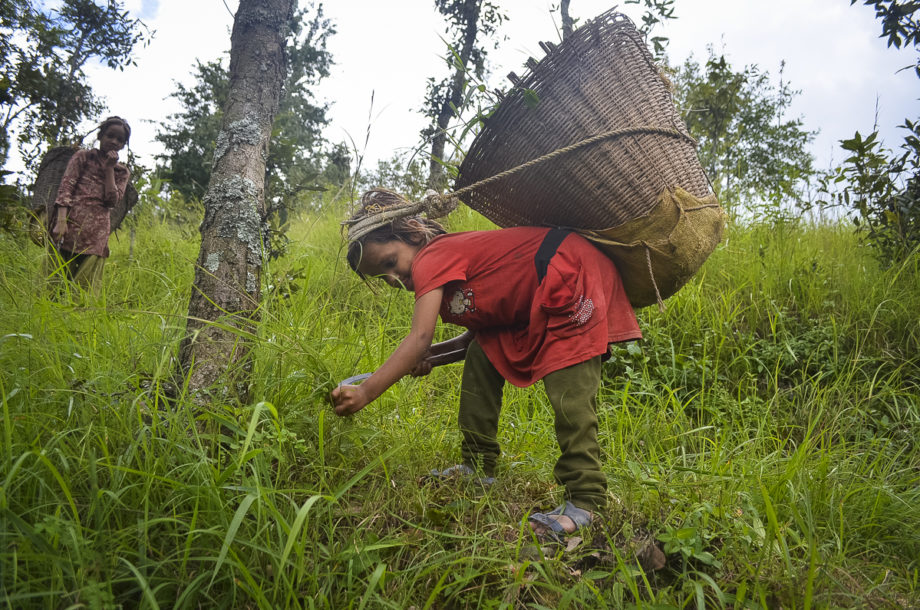 Bindu Mahara, 7, cuts grass that will be used for cattle feed. Her sister, Maya Mahara, 13, stands nearby. The girls earn food by doing this work for other villagers. Bindu says she wouldn’t eat if she didn’t work.

Bindu says she, too, works. She is a shepherd and collects firewood for some families in the village, who give her cooked food or grain as a payment. She leaves home at around 8 a.m. and returns in the late afternoon or evening.

Bimala Bista, 22, moved to Basuling village in 2012 after she got married, and when she arrived, she was determined to improve the educational prospects of children there. She saw that few children attended school, and that was a sharp contrast from her home village, where schooling was more common for children, she says.

Bista began teaching the alphabet and numbers in her home in 2013. A two-room schoolhouse, Shree Daada Baag Primary School, was built later that year. 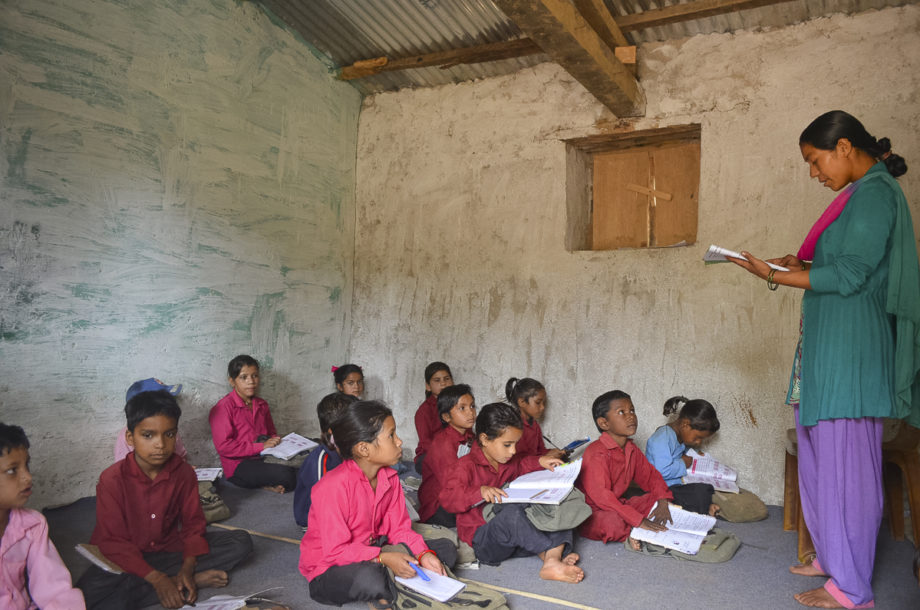 Bimala Bista, 22, is one of two volunteer teachers at Shree Daada Baag Primary School in Basuling. She doesn’t have any formal training to be a teacher, but she does the work because she wants to improve life for children in the village.

Her friend, Manmati Bista, 20, joined her at the school in 2015. The school can’t afford to pay them, so they work as volunteers.

Manmati Bista is from Basuling, and she’s one of the very few villagers who has earned a bachelor’s degree, which was made possible via distance education offered by a university in Baitadi district. Now, she’s eager to pass what she learned on to others. But neither Manmati Bista or Bimala Bista have any training or prior experience in teaching.

“The village will never change if this situation persists,” she says.