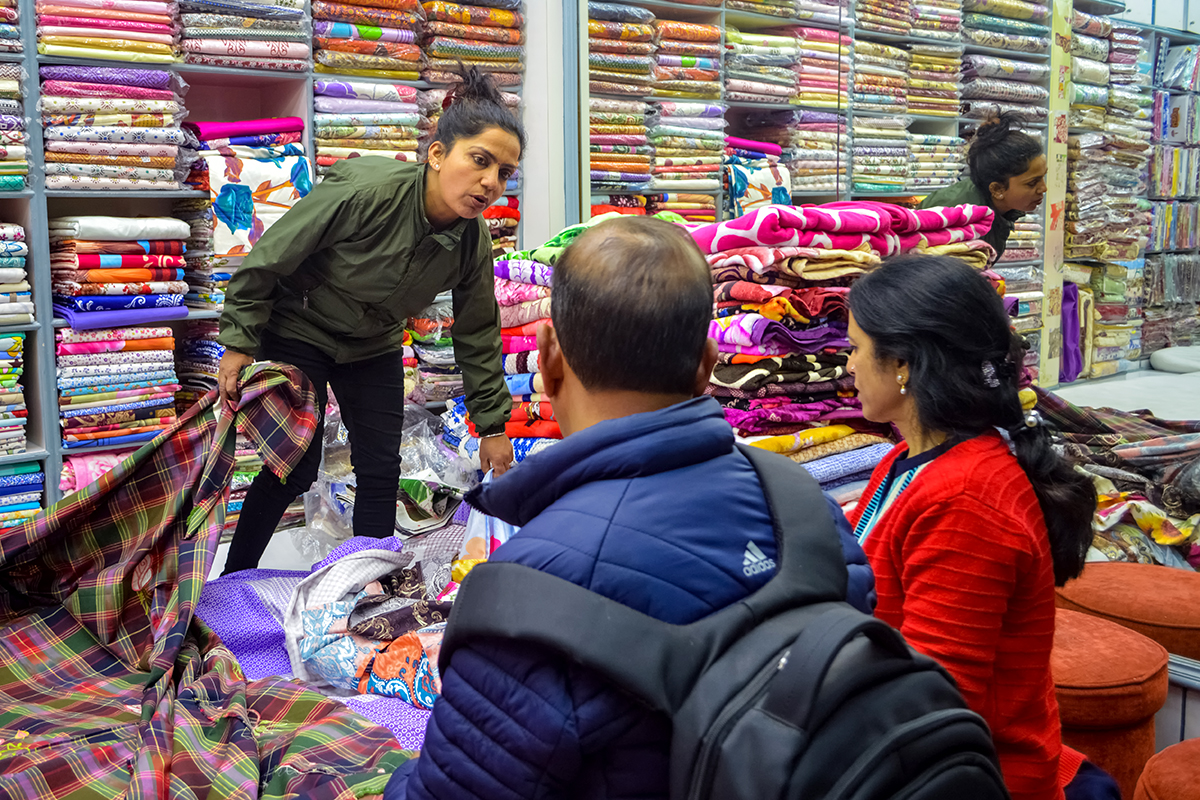 Rajendra Sherchen, who owns the store, pushes past haggling customers to help the pacing 20-year-old find a pair of jeans.

Sherchen is selling the jeans for 1,400 Nepalese rupees ($13.42), but Basnet offers to pay just over half that price. After a short exchange, the shop owner sends Basnet on her way home with a bargain.

The products sold at Sherchen’s shop are imported from China, Nepal’s northern neighbor. They are cheap for business owners to import and even cheaper for customers to buy, he says.

But when Sherchen opened his shop in 1979, he says, he relied on imports from India, because it was beyond his means to import clothes from Hong Kong, a commercial hub in southeastern China that was then a British colony and is now an autonomous territory.

“We traders have started to import Chinese goods, as it has become easier to bring goods from China than from Hong Kong, and prices are also cheaper there compared to India,” he says. 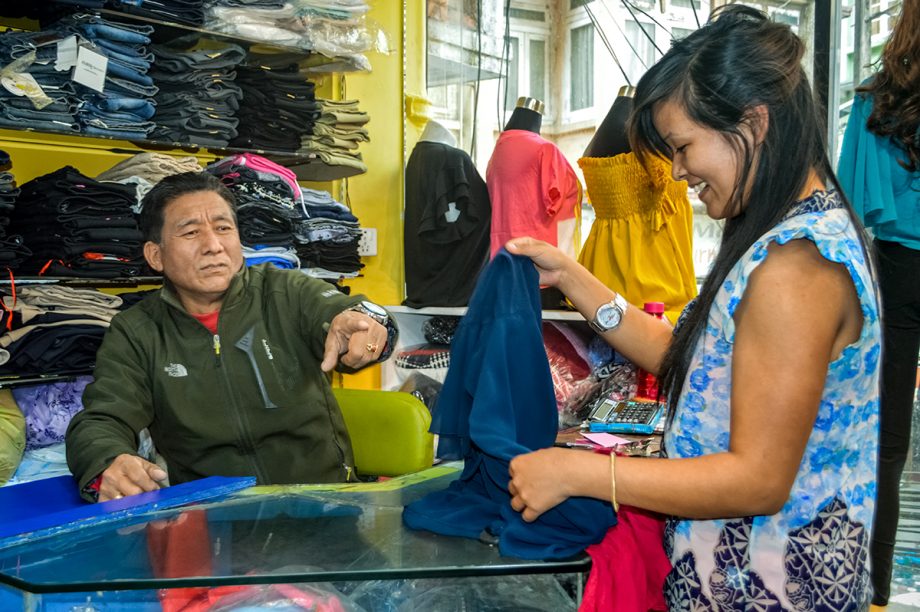 Rajendra Sherchen, owner of a clothing store in Sundhara, a downtown area of Kathmandu, Nepal, assists a customer in buying a dress. Sherchen’s store is stocked with imported Chinese goods.

Chinese clothing is becoming increasingly popular among traders and consumers across Nepal. For years, because of low domestic production, traders have relied on imports from nearby countries. While they say Chinese imports are in part responsible for thriving retail businesses, some local experts question the effect that these goods have on the economy. Nepal’s trade deficit is expanding because of the growing number of cheap, low-quality imports, the lack of little domestic production, and China’s export duties on certain Nepalese goods, experts say.

Though Nepal and China formalized relations in 1955, economic ties between the two countries have strengthened in recent years. China is Nepal’s largest source of foreign direct investment and its second-largest trading partner. Since 2015, in an effort to expand this relationship, the Chinese government has waived duties on at least 772 commodities that Nepal regularly exports to China, says Sarad Bikram Rana, executive director at the Trade and Export Promotion Centre, a government agency. Rubber and vegetable oil are among the commodities that no longer require tariffs.

Nepal’s economy is growing faster than in previous years, according to the World Bank. But its trade deficit is also widening, Rana says. While imports increased at an annual rate of 5.5 percent between 2010 and 2015, exports decreased at an annual rate 1.7 percent during those years, according to the Massachusetts Institute of Technology’s Observatory of Economic Complexity.

We traders have started to import Chinese goods, as it has become easier to bring goods from China than from Hong Kong, and prices are also cheaper there compared to India.Rajendra Sherchen

Despite the duty waiver for some Nepalese exports, the Chinese government still demands that exporters pay duties on certain goods, including decorative items, jewelry, textiles and herbal teas. China also conducts quality-control tests on these goods, says Purushottam Ojha, former secretary at the Ministry of Industry, Commerce and Supplies. Nepal, on the other hand, does not have such requirements.

“Nepal has neither laws nor mechanisms to restrict the flow of such substandard goods,” Ojha says. This trade trend, among others, discourages exports and could continue to harm the country’s economy, he says.

Nepal’s domestic manufacturing sector is known for low production, caused by years of war, political instability and natural disasters, says Rameshwor Khanal, former secretary at the Ministry of Finance. Unlike India and China, Nepal does not have surplus laborers in this sector, so manufacturing and sale of locally made goods can be costly and infrequent, he says.

However, Nepal’s working class and growing middle class are taking advantage of Chinese imports, Khanal says. After buying cheap clothing or electronics, they spend their surplus money on health care, education and other services, he says.

The imports are the traders’ livelihood. Sherchen, who has been in business for 39 years, says his shop allows him to support his family and own several plots of land. He imports Chinese clothing worth a total of 5 million rupees ($47,924) three times a year. The 58-year-old businessman says he earns a profit of 1.5 million to 2 million rupees ($14,377 to $19,168) every three months.

Traders who live in districts outside Kathmandu purchase cheap Chinese clothes from wholesalers at Boudhanath and Ranjana Galli, two markets in the heart of the capital, and return to their communities to sell them. Nina Acharya, a trader in Surkhet District, says she opened a garment outlet after selling her bakery in 2010. There was a huge customer demand for ready-to-wear Chinese clothes, she says. Since then, 48-year-old Acharya has built a one-story house using the income she earned through her business.

“I am earning better money by selling garments rather than bread,” she says. “That’s why I am thinking of expanding my business soon.”

Some visitors to Nepal also prefer to buy Chinese clothes here. Chandrakala Saraswoti, a tourist from the state of Tamil Nadu in south India, says she came to visit a sacred temple in Kathmandu but also took the opportunity to buy imported Chinese summer clothes for her grandchildren.

“Chinese clothes are available in India also, but they are cheaper in Nepal,” she says. “Though not of high quality, the goods are available at a cheaper price.”