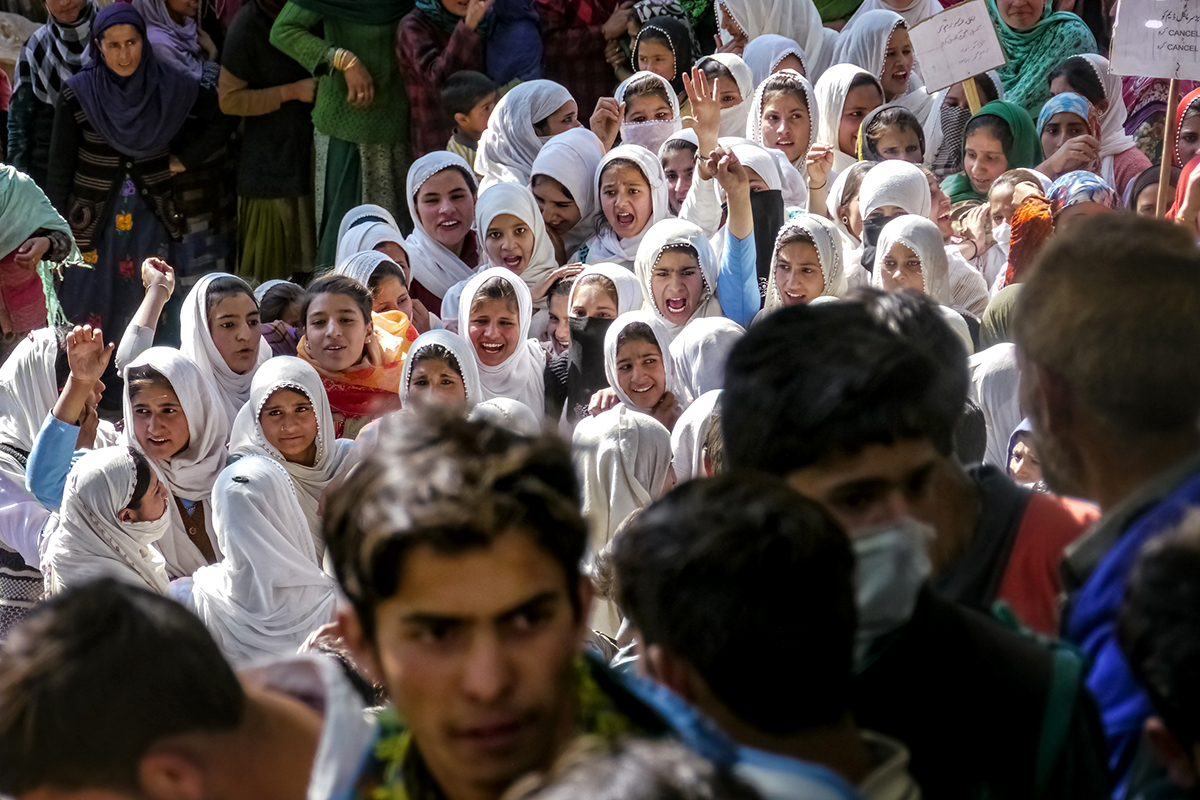 KISHTWAR, INDIAN-ADMINISTERED KASHMIR — There are few roads in the Marwah Valley, and those that exist are snowed under during the winter. For the most part, there is no electricity. Snow leopards, ibexes and other endangered animals shelter in the high peaks, while some of the continent’s mightiest rivers rush through lush valleys.

The area feels remote, but it’s far from empty. The Marusudar River – a tributary to the Chenab River, which first forms in India before flowing deep into Pakistan – is bounded on both sides by houses. Fields show signs that they’ll soon be ready for planting. Impromptu cricket games, starring local boys, attract village elders and small children as spectators. Women carry large vessels filled with water, and men herd sheep up and down the hills.

These hamlets have been here for generations, outlasting the political upheaval that dramatically changed life for people elsewhere in Kashmir, the region controlled by India but claimed by Pakistan.

But a major hydropower project could submerge more than a dozen of these small communities – significantly more than the Indian government says the project will.

Construction is set to begin this year on a massive dam, slated to be one of the world’s tallest, near the tiny village of Pakal. The 24,589-crore-rupee ($3.8 billion) Bursar Hydroelectric Project, which includes the dam, will control the Marusudar River’s flow, pushing water beyond its natural banks to spill across fields and homes, expanding the river’s width for nearly its entire length. If all goes according to plan, the dam will have 800 megawatts of power-generating capacity – a little more than one-third of the 2080-megawatt capacity of the Hoover Dam in the U.S.

The Indian government says that just more than 1,600 people will lose homes located in the 1,442-hectare (3,565-acre) submersion zone. But people who live in the Marwah Valley say the real number is closer to 36,000.

Global Press Journal's simulation of the Bursar dam, shown here, reveals that when the dam is full, at least a dozen distinct communities are in the water's path. This graphic shows accurate, scale topography based on satellite imagery and an accurate rendering of how the water will fill the valley when the dam is at capacity, based on the dam's height and its relationship with the valley's topography.

The government has promised to compensate landowners with money, but it won’t provide them with land where they can build new homes. Government officials said in early 2018 that there was a fund of 211.4-crore rupees ($32.7 million) set aside for that compensation.

The Bursar project, which was first approved in 2000 but fast-tracked in recent months, has sparked outrage in the Marwah Valley. People have been warned that they’ll have to move, but many say they’re prepared to die, submerged in water along with their homes, rather than lose the land that they say makes their lives possible.

Protests in Kishtwar, the seat of the local government, attract hundreds of people who march in front of their district’s headquarters and shout, “Justice!”

A 2017 environmental impact statement commissioned by NHPC, the government’s hydropower company, states that 1,673 people will be displaced because their homes are in the submersion zone.

Global Press Journal used satellite imagery to view the exact number of communities in the submersion zone and found more than a dozen distinct, populated areas there. A GPJ reporter who visited the Marwah Valley confirmed with local people that the submersion zone covers many more homes than the Indian government estimates.

There are at least a dozen distinct communities in the valley that is likely to be submerged once the Bursar dam is built. Global Press Journal identified these communities using satellite imagery. The Indian government estimates that just more than 1,600 people will lose their homes, but local people say the real number is closer to 36,000.

Government officials say the project will light up not only faraway places in India, but also will bring electricity to Marwah Valley villages that aren’t submerged by the dam. And in this area, where career options are largely limited to agriculture, a host of jobs will be available at the dam and other nearby project sites.

But the way many local people see it, the Indian government, which they believe abandoned them decades ago, can’t be trusted. People whose land is in the submersion zone were told that they would be compensated, but they are not convinced that the money will be enough to buy land elsewhere. Plus, they say, there’s no guarantee that the villages in the shadow of the dam will be wired for electricity or that local people will be hired if they apply for jobs at the dam site.

Marwah Valley residents say it’s maddening for the government to promise such benefits in one breath and in the next declare that their homes will be destroyed.

“Why all of a sudden?” asks Amirullah Salib, who at 75 years old is a lifelong resident of the valley. “Why not in these years they didn’t even remember us?”

The entire region of Kashmir has been marked by unrest for decades. Many Kashmiris reject the Indian government’s control. Protests are common in populated areas, including Srinagar, Kashmir’s primary urban center. The Indian military tightly controls life throughout the region, forcing Kashmiris to comply with police checkpoints, curfews, Internet shutoffs and other tactics. 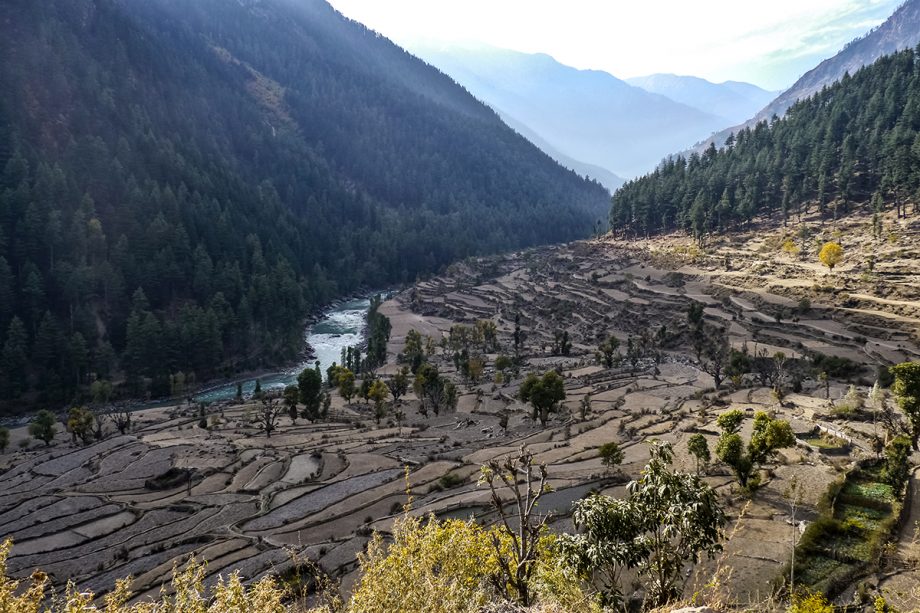 Known for its rugged beauty, the Marwah Valley is also a place of concern for the Indian government, which has identified it as a place that is "affected" by militant movements that reject Indian rule.

But there’s little the Indian government can do to control the Marwah Valley. There is no internet or cell phone service, so there’s nothing for India to turn off. There are few roads, so there is little in the way of transportation infrastructure to maintain. As in most rural Kashmiri areas, local schools receive little or no government support. (Read our story here.)

“We are living in the Stone Age and no one knows what problems we are facing,” says Mubeena Akhtar, a 20-year-old student.

The impact studies that analyze the Bursar Hydroelectric Project make little mention of the people of Marwah Valley. The 2017 environmental-impact study notes that the project is slated for an “entirely remote and isolated area.” That same study states that the Marwah Valley has been “affected by the militancy for a long time.”

The Indian government has a history of forcibly evicting landowners who stand in the way of hydropower projects. Some 3,300 dams have been built in the country during the last 50 years, according to research published in 2013. Most of those projects have led to forcible, large-scale evictions of as many as 33 million people in all.

The Bursar project is one of a handful of projects the Indian government says it will prioritize. But Pakistan has sought to stall India’s hydropower projects in Kashmir due to fears that they will ultimately suck those rivers dry, leaving Pakistan without key water sources. The two countries are party to the 1960 Indus Waters Treaty, which negotiated shared access to the water from rivers that flow through both countries.

Tensions rose between Pakistan and India in August 2017 when the World Bank, which facilitated the treaty, released a statement noting that India is allowed under the treaty to “construct hydroelectric power facilities on those rivers.” The World Bank hosts ongoing talks between the two countries to settle disputes over those projects.

With so much focus on the tension between Pakistan and India, the people of Marwah Valley say they’ve been misrepresented and forgotten.

“We heard that it was written in newspapers that 90 percent of the locals here have agreed to building the dam here, which is not true,” says Akhtar, the student.

In reality, she says, most local people vehemently oppose the dam. Even those who support it say the plan should be changed to avoid the destruction of homes and farmland, she adds.

Salib has lived in Dherna, a tiny village, his entire life. Dherna isn’t mentioned in any of the government’s environmental-impact studies, but Salib says it is in the submersion zone. When the dam is built, he says, Dherna will wash away.

Salib says he has long assumed that he’ll die in the place where he was born. Now, he says, his death might come more quickly than he planned.

Raihana Maqbool, GPJ, translated all interviews from Urdu to English.