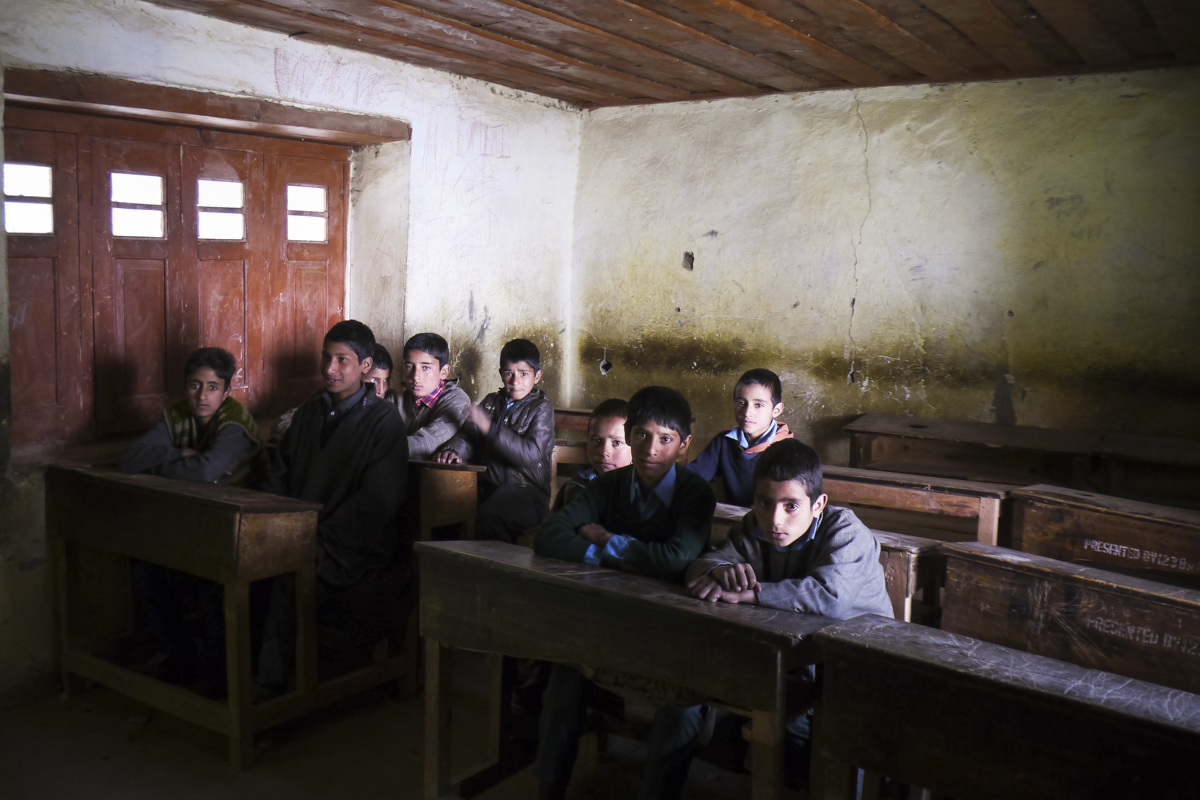 CHANDAJI, INDIAN-ADMINISTERED KASHMIR — Jameela Jan, 42, has never lived in a house with electricity, and she doubts she ever will.

Jan lives in Chandaji, an isolated village in Bandipora district in the Kashmir region. Chandaji is surrounded by thick forests and has no road access. Narrow footpaths are the only way to reach the remote village.

Jan spends most of her day collecting firewood from the forest. It’s an essential commodity: The traditional hearth in the house is not only used for cooking, but is also the only source of light and heating for the house.

“If there was electricity in my home, I would not have to go to the forests to get wood,” she says. “Wood is our main source. We have to keep the fireplace lit throughout the day.”

INSIDE THE STORY: In Kashmir, getting the story sometimes means setting out for remote areas. GPJ’s Raihana Maqbool describes her recent trek to report on a story about a lack of electricity in rural areas. Read the blog.

A widow for nine years, Jan has five children and a daughter-in-law, all of whom live in the same house. The family survives on the income earned by her two oldest sons, aged 23 and 21, who work as laborers at farms in the area.

Her two youngest children, a 17-year-old daughter and 15-year-old son, are students at the Government Boys Middle School in the village.

They sit near the fire to read from their books as they study into the night during exam periods, she says.

“They somehow manage their studies on other days, but during the exam days they suffer,” she says.

Their eyes are strained from the fireplace’s smoke, she says, and her own health has suffered, too. The smoke has led to continual chest infections.

The Kashmir region is one of India’s most water-rich areas, and hydropower generation is a major industry in Jammu and Kashmir state.

But the benefits of the thousands of megawatts of power generated are not felt in villages in the state that have no access to electricity.

Our village is far, and we cannot even protest. Who will listen to us from here? Zakir Hussain Khan, the headman of Chandaji, a village that lacks electricity

The estimated hydropower potential of the state is 20,000 megawatts, of which about 16,475 megawatts have been identified, according to the Economic Survey 2014-15 of the government of Jammu and Kashmir. Out of this identified potential, only 17 percent has been exploited, the survey says.

Despite the state’s electricity generation, more than 1,000 villages are without electricity, says a survey by the Jammu and Kashmir’s Power Development Department, released in December 2015.

According to the state, any village without operational and regular electricity is considered unelectrified, she says.

The people in those villages are among the 1.2 billion people the International Energy Agency estimates are living without electricity around the world, that agency’s World Energy Outlook 2015 reports.

Chandaji sits just 10 kilometers (6.21 miles) from the Kishanganga Power Project, which is under construction. This power plant, using water from the Kishan Ganga river, will have an installed capacity of 330 megawatts when completed later this year, and will be managed by NHPC.

But villagers expect power lines carrying electricity from this plant to pass them by, says Zakir Hussain Khan, the sarpanch, or headman, of the village.

Chandaji is isolated and ignored by the government and the rest of the world, he says.

Khan was elected in 2011 to the village council and has been working to get electricity to the village since that time. But he has had little success. 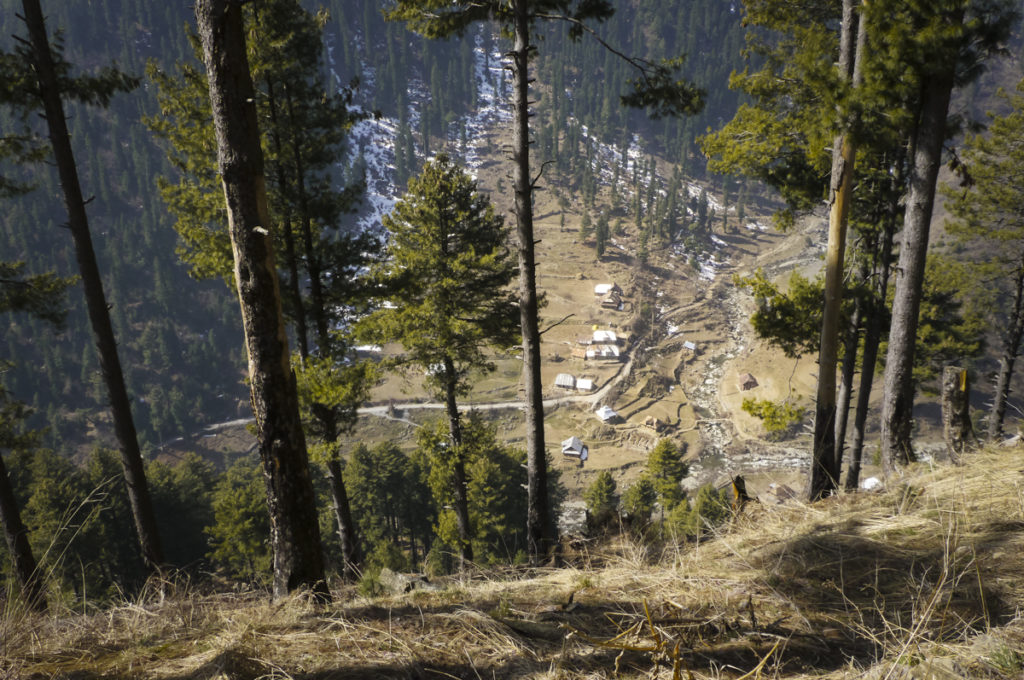 The village of Chandaji is in a remote, mountainous area that government officials say is difficult to connect to electricity. 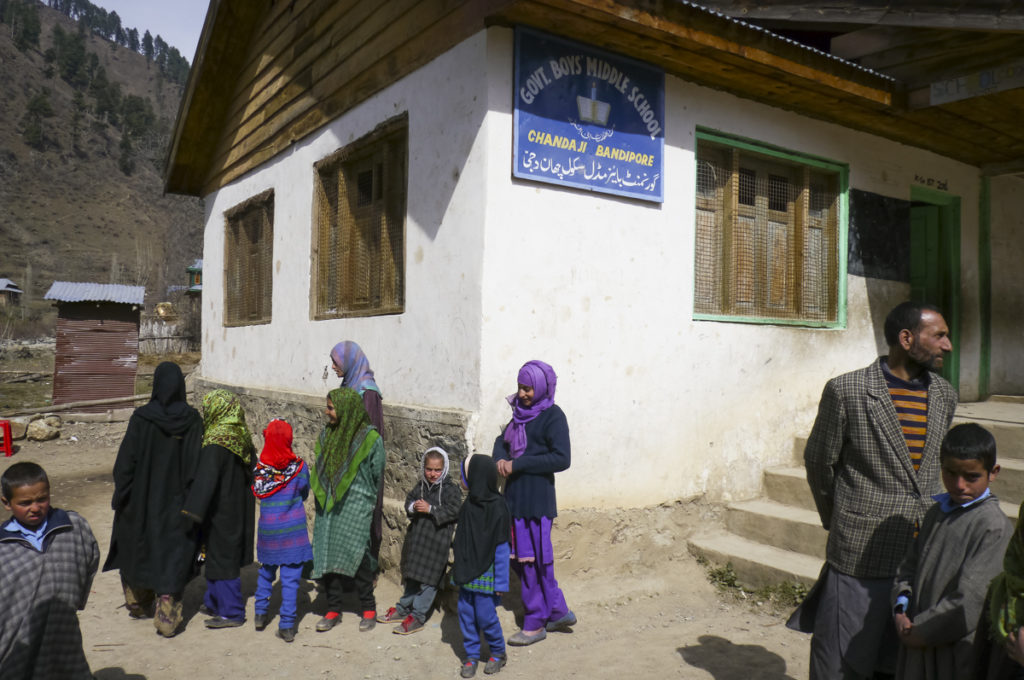 Students and their family members gather outside the Government Boys Middle School in Chandaji at the beginning of the school day. 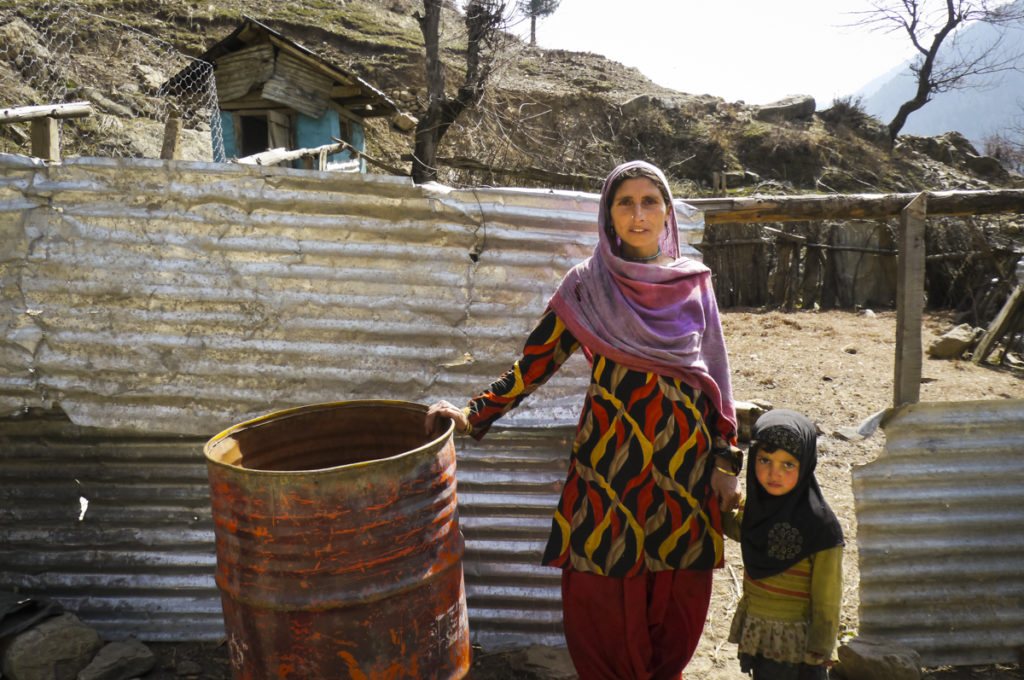 Jameela Jan, 42, stands with her granddaughter, 4-year-old Insha Riyaz, near a metal drum kept outside their home to collect rainwater. When the river is frozen or runs dry, the metal drum provides an emergency water supply, Jan says. Only some of the village’s homes have plumbing. 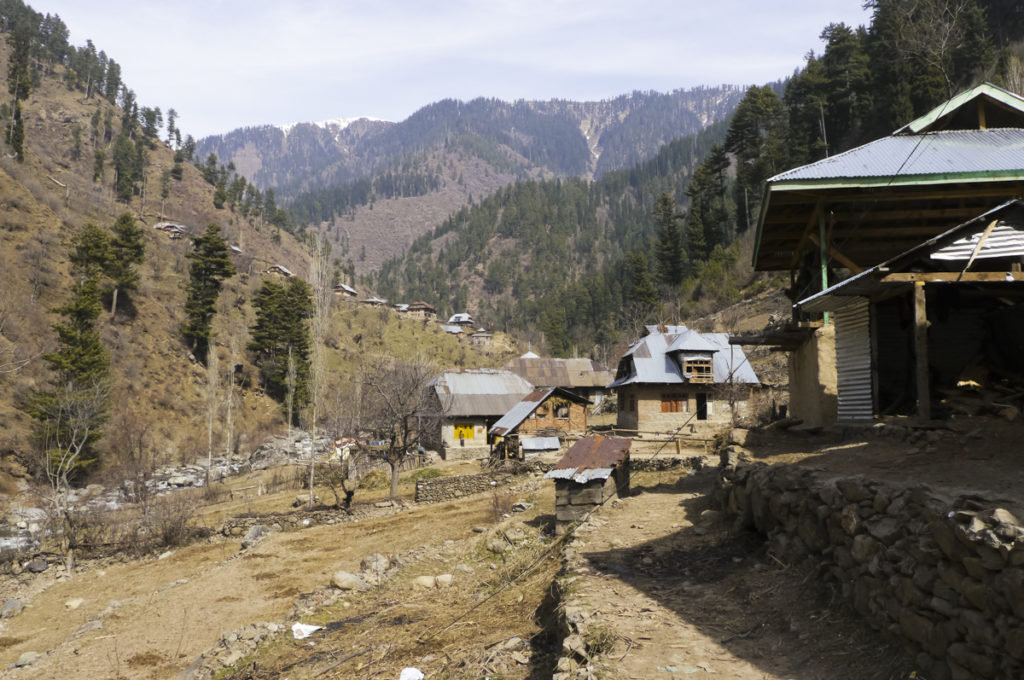 Chandaji is surrounded by pine forests, and most homes are made of mud and rocks. 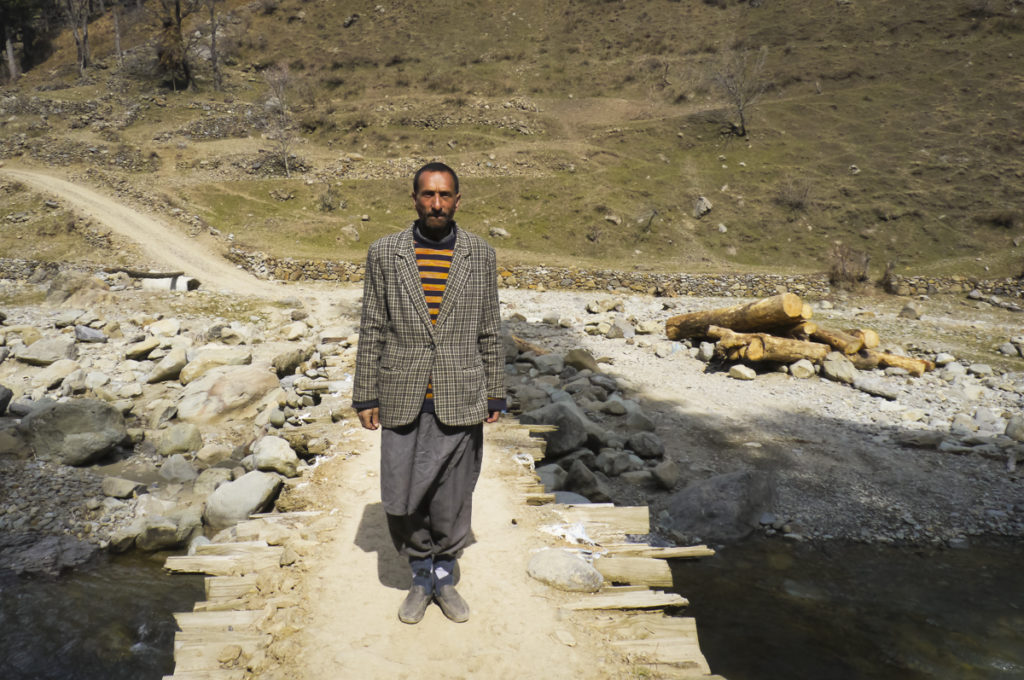 Zakir Hussain Khan, the village sarpanch, or headman, stands on a small wooden bridge built over a stream that flows through Chandaji. Khan and other villagers say the government has ignored their need of electricity. 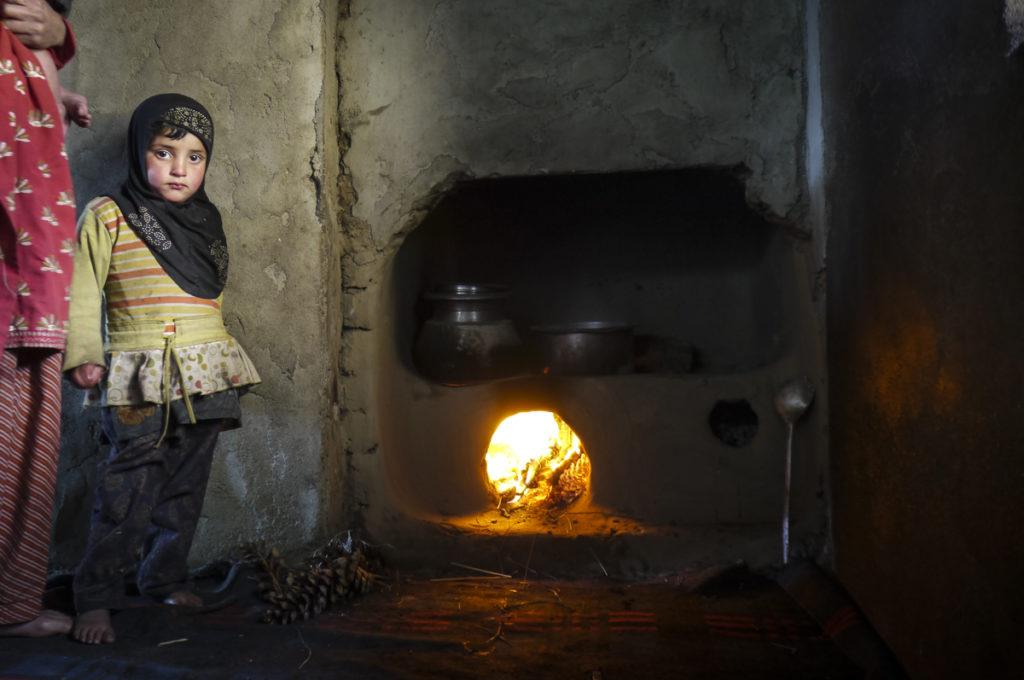 Insha Riyaz, 4, stands near a traditional fireplace used for cooking in her home. People in Chandaji say the smoke from these fireplaces harms their health.

“Our village is far, and we cannot even protest,” he says. “Who will listen to us from here?”

Chandaji, with 150 households, is considered a small village or hamlet, and is not even recognized by name in the government administration system, he says. Families there are grouped together with two other villages, Malangam and Kotasatri, and listed under the name Malangam in most government records.

The village has an electrical transformer, but it is not connected to electricity.

The people of Chandaji are part of the Gujjar indigenous group, Khan says.

Chandaji also lacks other basic services, including a health post and access roads, Khan says. A few people in the village own horses, which are their only form of transport.

“The government has neglected us, and we feel like aliens,” he says. “We need electricity in our homes so that we could get over all these problems.”

In the age of modernization, this village is still living in the dark age.Rashida Begum, a schoolteacher in Chandaji, a village that lacks electricity

Qalander, the social activist, is part of an effort to rectify what he says is unfair treatment of Jammu and Kashmir state when it comes to electricity-sharing agreements between the state and central governments. A public interest litigation suit has been filed as part of that effort.

Bashir Ahmad Khan, chief engineer of the Power Development Department, Kashmir, says that the government is working to bring electricity to villages throughout the area.

“We are quite aware about these areas, but the major problem is the geographical location of these places,” he says. “The problem is that the village is surrounded by forests on all sides. It is steep. In winter, there are some snowslides. It is very difficult to take the electric wires and poles to such places.”

The state government is positive that it can provide electricity to all remote villages, Bashir Ahmad Khan says. But a specific time frame has not yet been decided on, he says.

Because Kashmir has the water resources, the government is looking at other alternatives too, he says.

“We have already developed small hydropower projects at many places, and we have plans to move this process further,” he says.

In the meantime, life without electricity is difficult, says Farooq Ahmad Khan, 55, who lives with his wife, three sons and two daughters in an old mud house.

“Winters are worst, as days are short and we have to keep the wood burning for many hours,” he says. “Our village is under heaps of snow, and it becomes very cold in winters. If we had electricity, we would use some heating products, but we have only one option: that is to use a traditional bukhari, which uses a lot of wood.”

And the bukhari fills the room with smoke, which has caused lung infections and breathing problems, he says.

Riyaz Ahmad, 13, says his eyes are always tired because he struggles to read in poor light. Even at the Government Boys Middle School, the only available light comes when the sun shines through small windows.

“During cloudy days, the light in the classroom becomes so dim that we can hardly see what is written on the books,” he says. “Sometimes we can’t even see the teacher.”

Riyaz has read about electricity in his schoolbooks, but has never experienced it.

“I have never seen electricity in my whole life,” Riyaz says. “We desperately need electricity so that we can excel in life.”

If it is so difficult for them to provide us with electricity, they can at least provide us with solar lights. The population of the village is below the poverty line, and they cannot afford a solar light themselves. Zakir Hussain Khan, the headman of Chandaji village, which lacks electricity

“The students have never seen what a computer is, and when they read about these things, they only wonder,” she says. “They want to learn how to use a computer but cannot do so.”

The children of Chandaji are at a disadvantage in exams and can never catch up, she says.

“Electricity is the need of the hour in the school so that our students can compete with students from other schools,” Begum says.

Khan, the headman, says that if the government cannot provide them with electricity, it should find some alternatives.

Begum says the lack of electricity discriminates against the entire Chandaji village, making it harder for villagers to move out of poverty and improve their lives.

“In the age of modernization, this village is still living in the dark age,” Begum says.