In Norogachi, Holy Week is one of the most festive times of year. But a spate of conversions has dampened the events — and may threaten the future of local traditions.

Photo at top: Celebrants gather in front of a Norogachi church during Holy Week in April 2021.

NOROGACHI, MEXICO — Nestled among the canyons of the Sierra Tarahumara in the western state of Chihuahua, Norogachi is a placid town for most of the year. Fewer than 800 people live here, most of them Rarámuris, members of one of the largest indigenous groups in northern Mexico. But in the week leading up to Easter — Semana Santa, or Holy Week — Norogachi explodes into festivity, a whirl of dancing and drumming. As many as 250 dancers pour in from surrounding settlements, their traditional attire colorful against the dusty brown mountains and golden fields of corn. At night, the landscape glows. Countless bonfires warm the Rarámuris as they dance.

In recent years, the signature colors and sounds of Norogachi’s Holy Week celebrations have dimmed. The pandemic led to the suspension of the festival in 2020, and it has attracted fewer visitors since. More worryingly, say local leaders, the community, which has long practiced a syncretic form of Catholicism, is losing members to evangelical Protestantism, part of a trend across Latin America.

In Norogachi, the change is especially visible during the Holy Week festivities. With each passing year, fewer dancers take part.

José Fidencio Espino Romero, the 51-year-old governor of Norogachi, is particularly perturbed. During apple-picking season, he says, Rarámuris from the town often migrate to Cuauhtémoc, a city 230 kilometers (143 miles) away, where they have recently begun working in orchards belonging to Mennonites, a Protestant denomination with a centurylong presence in the state of Chihuahua. When they return, he says, it is as Christians — which is how many Mexicans refer to members of non-Catholic denominations.

“They come back from the city and don’t think of themselves as Rarámuris anymore,” Espino says. “They no longer want to dance or partake in celebrations.” 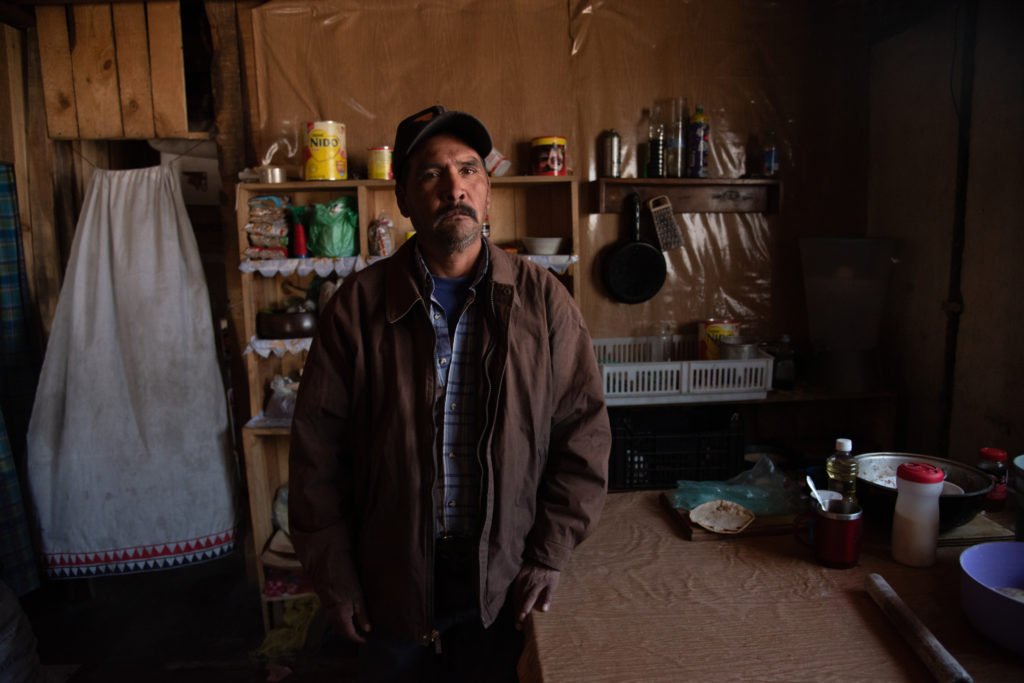 José Fidencio Espino Romero, 51, the governor of Norogachi, stands inside his home.

Other Protestant groups have begun proselytizing in Norogachi itself.

Espino’s concern over the waning of Holy Week festivities is heightened by the crucial communal role that these celebrations play in Rarámuri culture: This is when marriages are arranged, partnerships formed, kinship networks extended and communal problems collectively resolved. In community chats known as nawésari, leaders solemnly remind people what it means to be a good Rarámuri.

Those who convert to Christianity no longer partake in the festival, Espino says, because they’re newly prohibited from dancing and drinking teswino, an artisanal corn beer that the community considers sacred. They also step away from previous religious obligations — which, in many indigenous societies, are also economic and social obligations — further fracturing a community already grappling with drought, deforestation and drug-related violence. 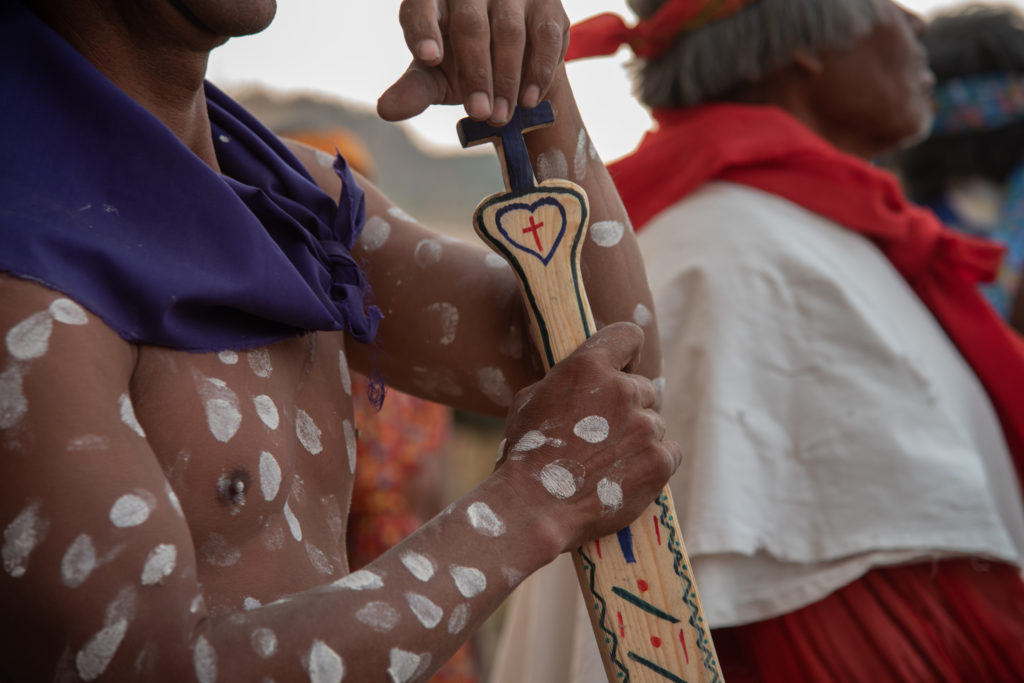 A man decked out in body paint for Norogachi’s 2021 Holy Week celebrations holds a wooden cane.

In Chihuahua state, Protestants and evangelical denominations constituted nearly 13% of the population in 2020, up from 9.5% in 2010. Over the same period, according to the national statistics agency, the number of Catholics declined from 76.4% to 72.5% whereas the number of people unaffiliated with any religion increased by 6% to 13.5%. This is consistent with the overall trend in Mexico.

Arturo, a Rarámuri resident of Norogachi who asked to be identified by his first name only due to stigma surrounding alcoholism, converted to Apostolic Christianity along with his entire family more than a decade ago. He says his faith prohibits him from imbibing alcohol, including teswino, which is why he abstains from Holy Week festivities. He describes his past self as an aggressive man who drank a lot.

“Now, I don’t go to parties,” he says, “and I stopped beating my wife. If the parties were without alcohol, they would be fine — but priests do allow drinking, which is why there’s so much chaos.” 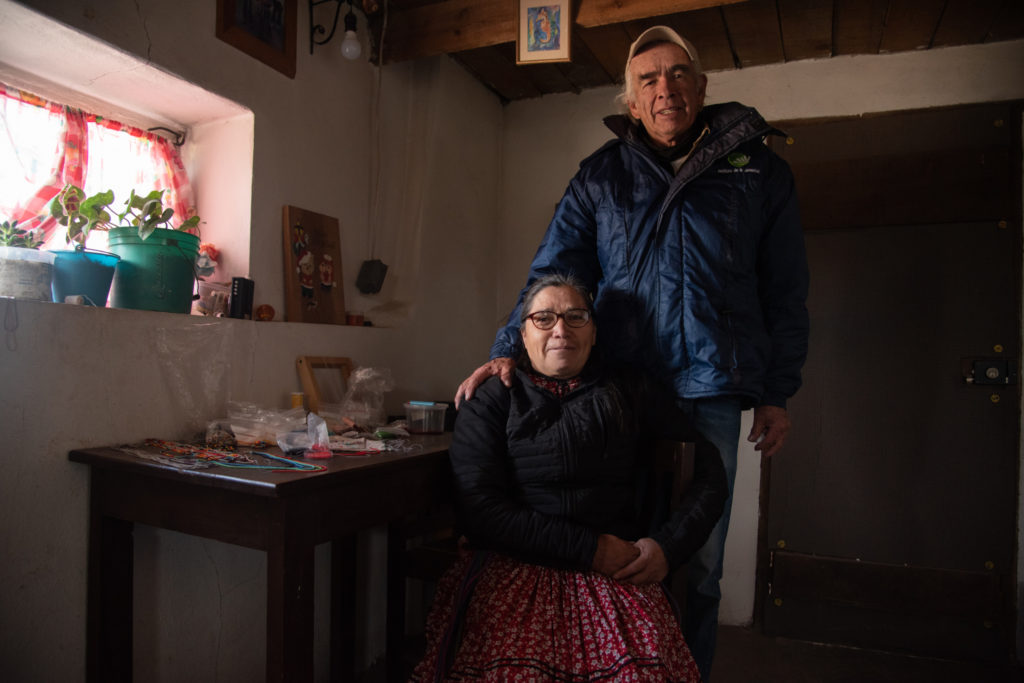 Matiana García Gardea, 55, and her husband, Carlos Vallejo, 74, at their home in Norogachi.

Carlos Vallejo came to Norogachi from the city of Guadalajara in 1977 to serve as a priest but left the priesthood when he fell in love with a Rarámuri woman. An influential figure in the community, Vallejo says the insistence of evangelical groups that people abandon long-standing cultural and linguistic traditions is worrisome: “Any group that says, ‘What you’re doing doesn’t work,’ is destructive to the community.”

He attributes the recent effectiveness of evangelical groups to their wide-ranging approach — they run clinics alongside churches, for example, providing free health care to Rarámuris. “I see a much more open attitude,” he says. “They attend to everyone, not just their own followers.”

Espino agrees. In Norogachi, trucks full of food and clothing park right outside the Apostolic Church of the Faith in Jesus Christ, drawing people to its doorstep. “I think that’s the reason people are leaving [the Catholic] religion,” he says. 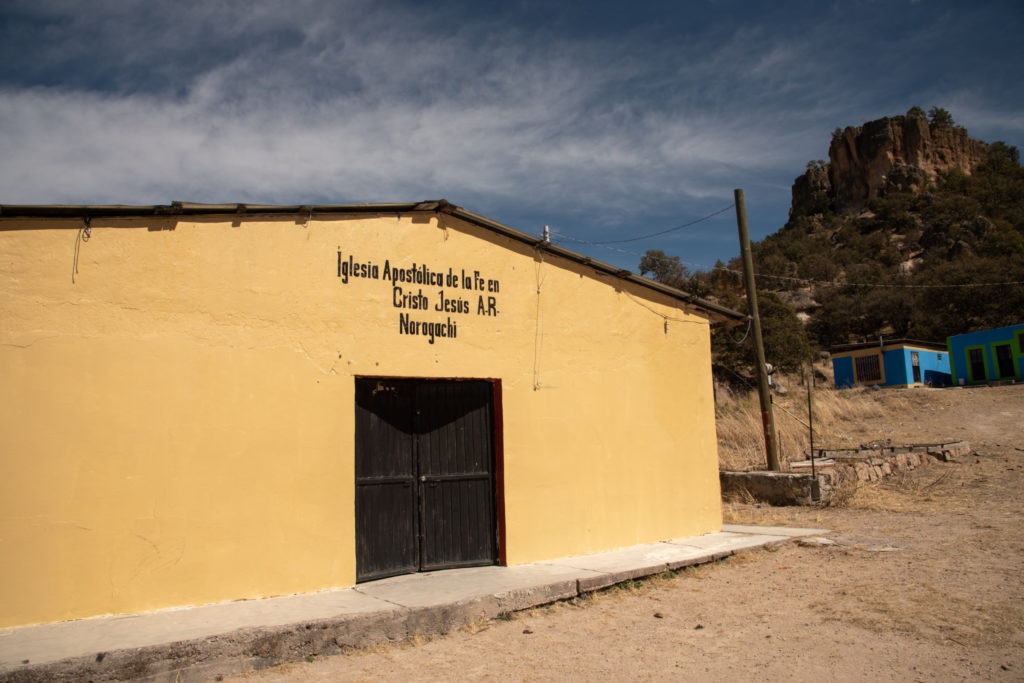 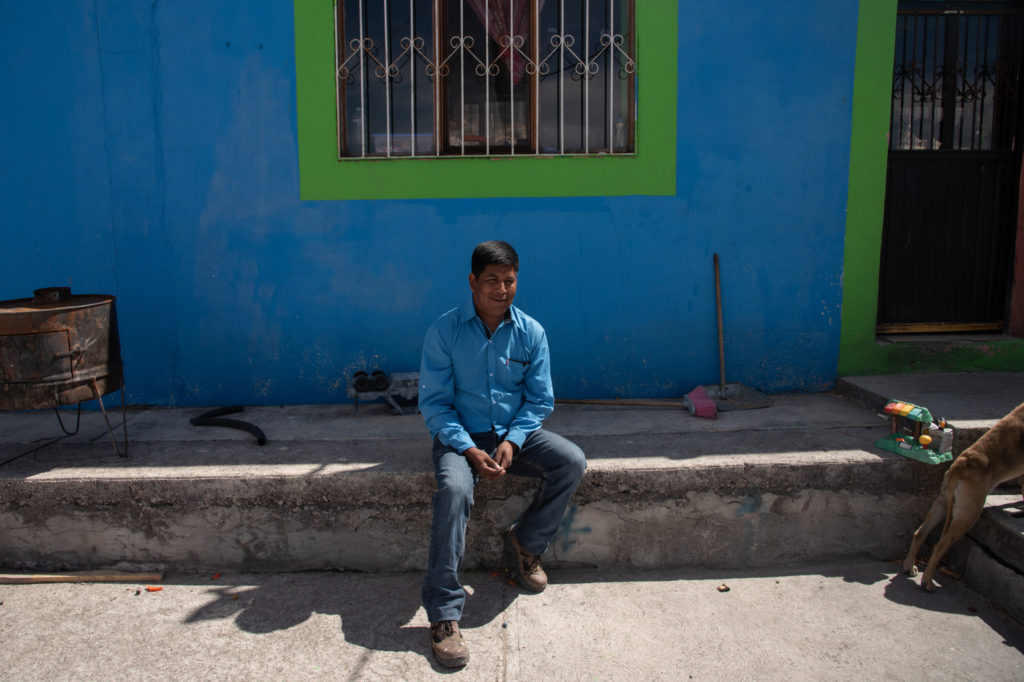 Félix Martínez Nava preaches every Sunday morning at the Apostolic Church of the Faith in Jesus Christ, which began operating in Norogachi five years ago.

The Apostolic church in town, a small squat structure with pale yellow walls and a sloping roof, began operating in Norogachi five years ago. At the time, according to its pastor, Félix Martínez Nava, the church had seven congregants. Now, as many as 50 people attend Martínez’s service every Sunday, although most have not yet been baptized into their new faith. Martínez, a Rarámuri man who was raised Catholic, takes a dim view of Holy Week celebrations because he believes these practices do not honor Jesus. “They’re traditions that man teaches man,” he says, emphasizing the need to abstain from alcohol.

Francisco Javier Rascón Montoliu, regional director of the Mexican Missionary Cooperation, an evangelical umbrella organization, is more equivocal. When he organized a race among the Rarámuri several years ago — the community is known for its long-distance running prowess — the prize was a sack of beans and corn, which he knew might be used to brew teswino.

“We tell them, ‘You know what you use it for; if you want to do your [feasts involving teswino], go ahead,’” he says. “We do not prohibit. At some point, they stop going to teswinadas and dancing out of conviction.”

Nevertheless, even evangelical groups acknowledge that conversions are affecting Rarámuri culture, especially linguistic traditions. “God says we have to be proud of our languages,” Martínez says. “That’s not something we should lose.” But while he preaches in Spanish and his native Rarámuri, a language belonging to the Uto-Aztecan family spoken by around 90,000 people, he notes that many of the evangelical churches in the Sierra Tarahumara don’t have Rarámuri-speaking pastors or interpreters. The sermons are almost entirely in Spanish — an additional stressor, alongside the dwindling of Holy Week, on Rarámuri cultural continuity.