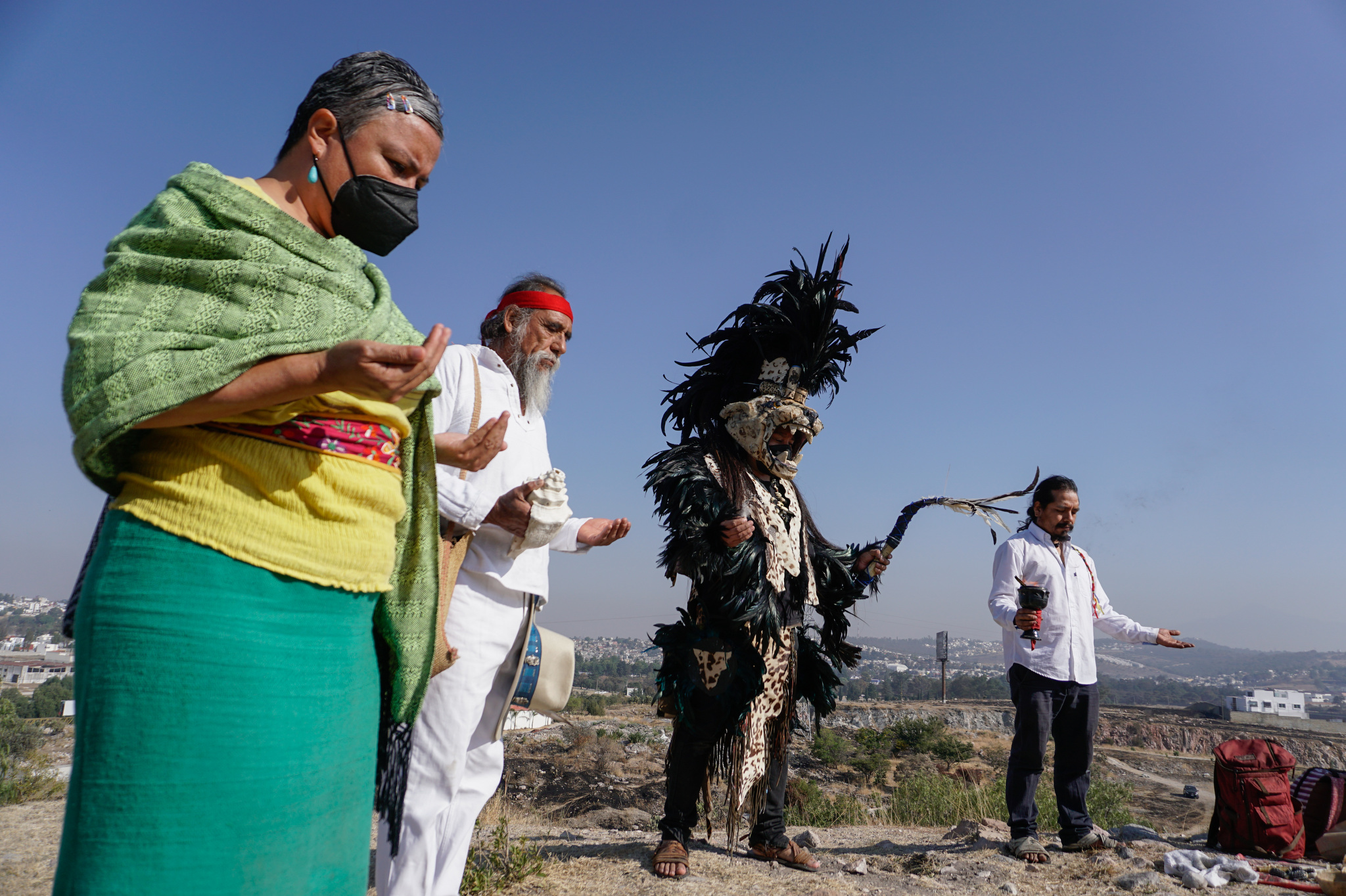 PUEBLA, MEXICO — The ceremony begins. Sunshine warming their faces, several dozen people fidget as indigenous elders, known as grandparents, offer chia seeds and flowers to Mother Earth. A dancer is dressed as a jaguar, and a plume of black feathers cascades down his back. Copal tree resin perfumes the air. One by one, participants announce their intentions by invoking ancient gods.

“Ometéotl,” says Mario Morán Rodríguez, the organizer, referring to the provider of all cosmic energy.

“Ometéotl,” officials and activists reply through the howling wind.

The group is perched atop the Tepalcayotl pyramid, though it isn’t much of a pyramid anymore – just a series of brown lumps rising from parched grass. Tires litter the ground; car horns honk. Morán hopes the ceremony persuades the group that the site is nevertheless a teocalli, or sacred place, worth saving.

Morán, 42, is trying to protect the millennia-old site from looming construction projects. Mexico is renowned for its giant shrines, such as the Pyramids of the Sun and the Moon in Teotihuacán. But it’s harder to save a pyramid that no longer resembles a pyramid.

“People, since they do not see a construction, do not give it its importance,” says activist María del Carmen García Ramírez. “They see it as a hill.” 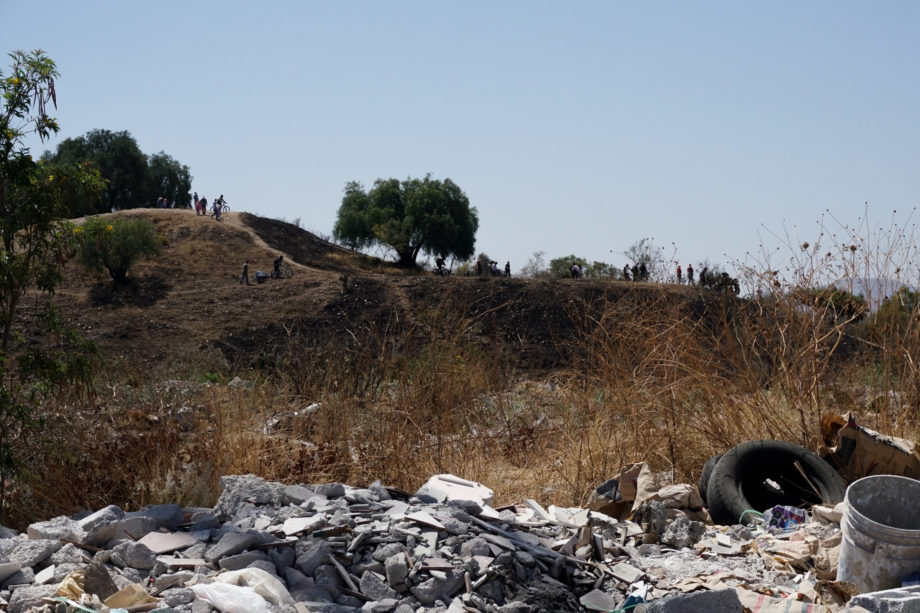 Locals hike at the Tepalcayotl pyramid. Over the years, many people have treated the site as a trash pit, dumping animals and smashing beer bottles.

The campaign is part of an emerging appreciation for Mexico’s indigenous roots. In Puebla, about 130 kilometers (80 miles) east of Mexico City, many people identify as mestizo: part indigenous, part Spanish. Yet indigenous people are often excluded from the city’s origin story, said Herón García Martínez, a professor at the Meritorious Autonomous University of Puebla, at a forum last year.

If Tepalcayotl disintegrates, so does a link to the pre-Hispanic era. So activists want to turn the 540,000 square-meter (133-acre) site into a cultural park and community center.

It hasn’t been easy. All the land is privately held. At public meetings, residents worry that preserving the pyramid could result in the government forcing them from their homes. In March, when historic preservation officials arrived to investigate reports of construction at the site, several dozen irate neighbors greeted them.

“Would you like me to come to your house and get into your yard?” one man said.

Multiple neighbors declined to comment, saying they feared retaliation. In a Facebook post, Ricardo Hernández Hernández, a lawyer affiliated with the residents, said they intend to protect the site.

“What we are in favor of is dialogue to also respect the civil rights of the people,” he wrote. “To respect the right to property.” He declined to be interviewed. 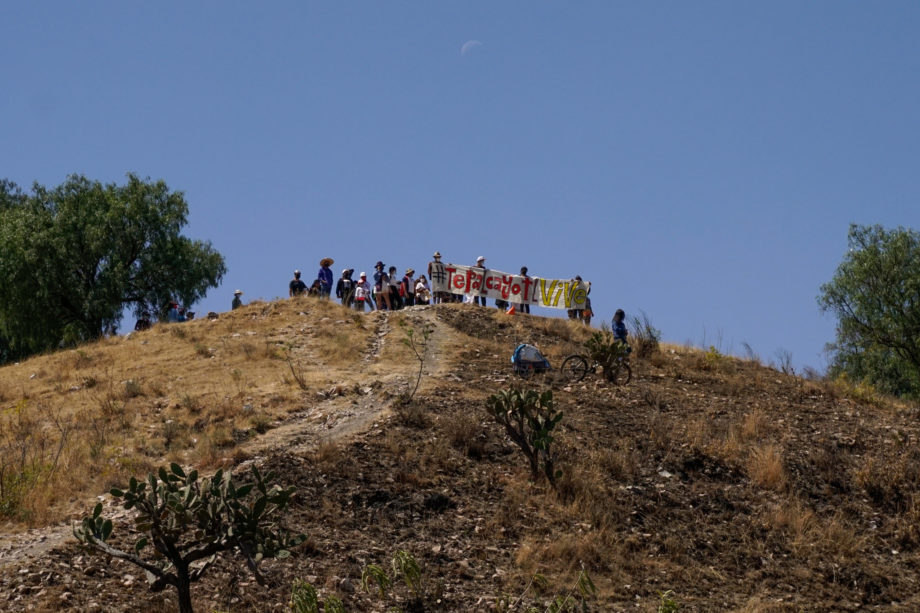 Activists demonstrate in March at the highest level of the pyramid. Their banner says, “#TepalcayotlVive,” or “#TepalcayotlLives.”

The Tepalcayotl people arrived in what is now southern Puebla in 695 B.C. They built a large pyramid, whose chamber held a sarcophagus, or stone coffin, and frog symbols. All that remains are eight pyramidal bases – the brown lumps. Morán calls them “cerros de las tortugas,” or turtle hills.

An archaeologist excavated the area in the 1960s, finding walls, steps, figurines and burial sites. In the ensuing decades, neighbors treated the turtle hills as trash pits – dumping animals, smashing bottles, graffitiing the remnants of a tomb. They flattened one base entirely and singed the grass to mark lots for homes.

Technically, the local branch of the National Institute of Anthropology and History, a federal agency, oversees the site. But its authority to prevent construction – or destruction – on private land is limited, so it relies heavily on community goodwill.

In 2016, Tepalcayotl was designated an archaeological zone, which should have prevented new construction. Nevertheless, the city allowed a gas station to rise from the dirt. Houses followed; sales of lots continue. In a statement, Puebla’s urban development ministry said it had no “powers to perform any intervention in archaeological zones.”

“The only thing that will save this place is that citizens value the origins of what we have there,” Morán says.

Morán had no idea the site existed until he was a teenager. A friend told him, “Let’s go to my house; there is a pyramid nearby.” Last year, as the pandemic bore down, he lost his job as an industrial engineer and started visiting the site. He grew so connected to it that, one day, he says, he heard the pyramid begging for his help. 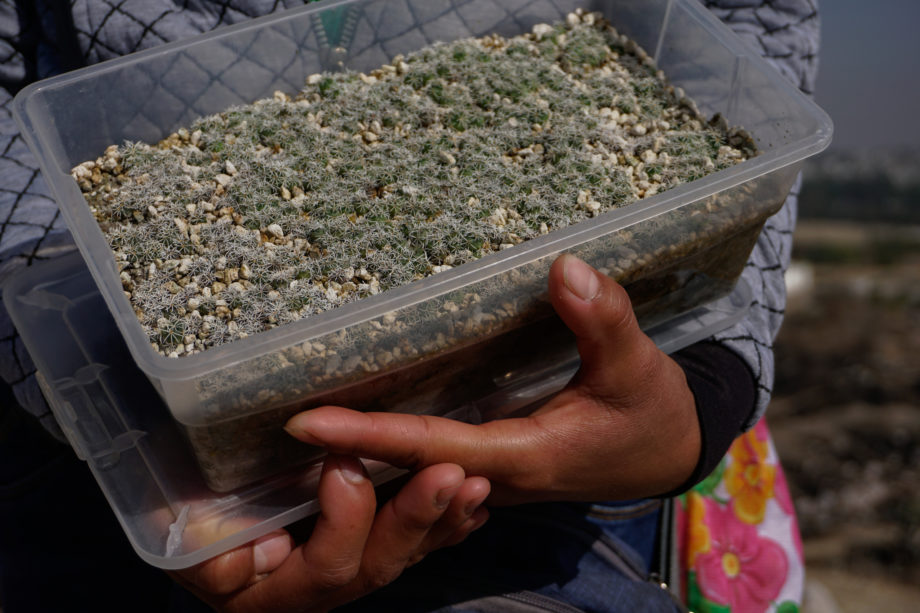 Activist Maya Coryphantha participates in a traditional ceremony. A cactus grower, she brought Coryphantha elephantidens cacti born of seeds she collected from the site.

Mexico has about 40,000 registered historical sites, including Tepalcayotl. But only 193 are public, says national institute researcher Moisés Valadez, which means the agency provides security, restrooms and parking, and markets them to tourists. Few are earthen structures. In a 2018 article, archaeologist Annick Daneels argued that’s because of “Western prejudice that conceives only stone architecture as noble architecture.”

One exception is the Great Pyramid of Cholula, less than 20 kilometers (12 miles) from Tepalcayotl. From afar, it’s little more than a knoll, but visitors can wander inside via tunnel. Advocates envision Tepalcayotl bringing similar respect and revenue to their town.

But to become a public site, the national institute evaluates whether an area is well preserved, and whether it could remain that way if open to visitors. The local branch can’t even afford to install signs at Tepalcayotl, says Sergio Suárez Cruz, an archaeologist there. As the pyramid erodes, so do its chances for federal help.

“It’s visually painful to see that a place so full of history is being destroyed,” says activist Brandon Antonio López Pérez.

The ceremony this winter was one of several Morán has organized to draw attention to the pyramid. After everyone invokes Ometéotl, ocarina flutes tinkle and teponaztli drums thrum. Dancers flail their arms as if grabbing the sky. A grandmother asks the gods to help the activists, “so the rescue of your sacred house may continue.”

For a moment, the site is as Morán envisions it: a monument instead of a dirt mound.