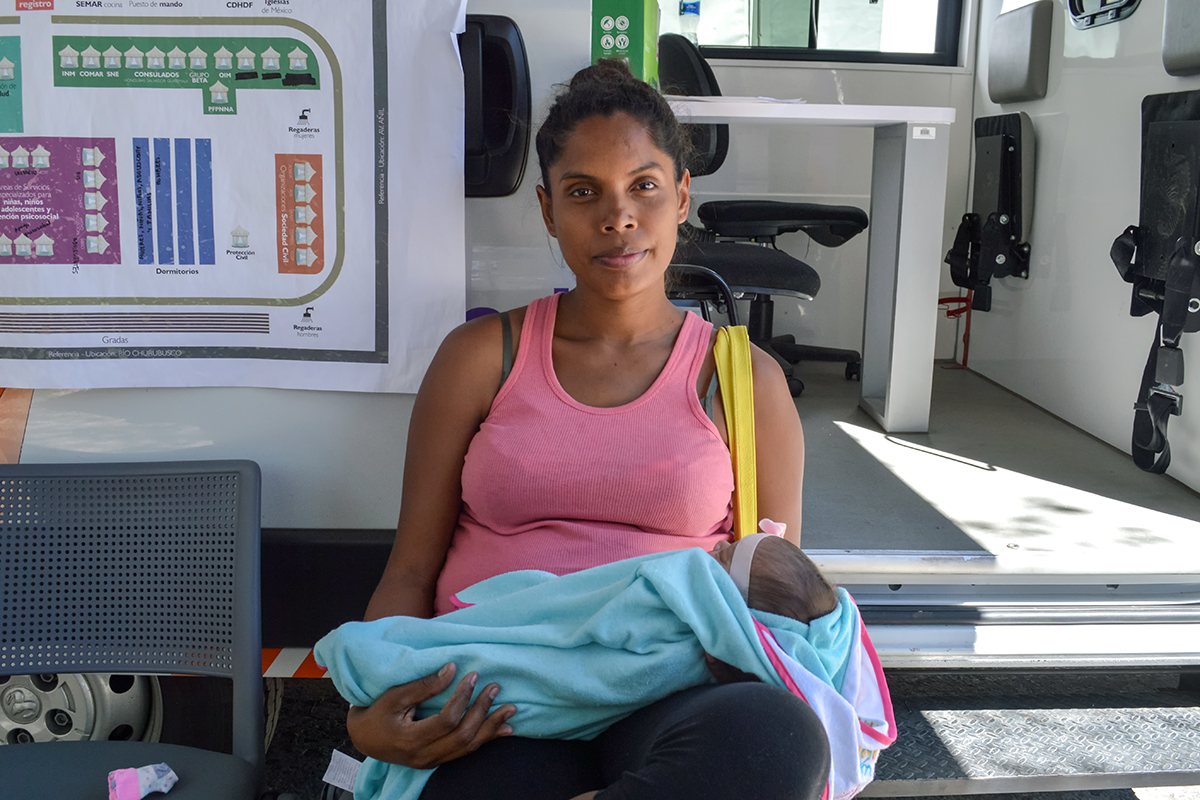 MEXICO CITY, MEXICO — Rieecxy Mabely Escoto spent much of her trip from Puebla state to Mexico City with her head bent over a bag. She was nauseous and couldn’t stop vomiting.

Escoto, 26, was early in her pregnancy when she made the trip, and it wasn’t an easy ride. She was part of a large group, estimated at one point to be as many as 7,000 people, often called a caravan. The group was made up mostly of people from Central America who aimed for the southern U.S. border, where many said they hoped to apply for asylum. Many people who joined this and other similar groups to travel north say they left their home countries to escape widespread gang violence, or to join family members who were already in the U.S.

“It’s difficult to do the trip pregnant because [traveling] in the caravan sometimes is only hitchhiking on trucks, trolleys or dump trucks,” Escoto says. 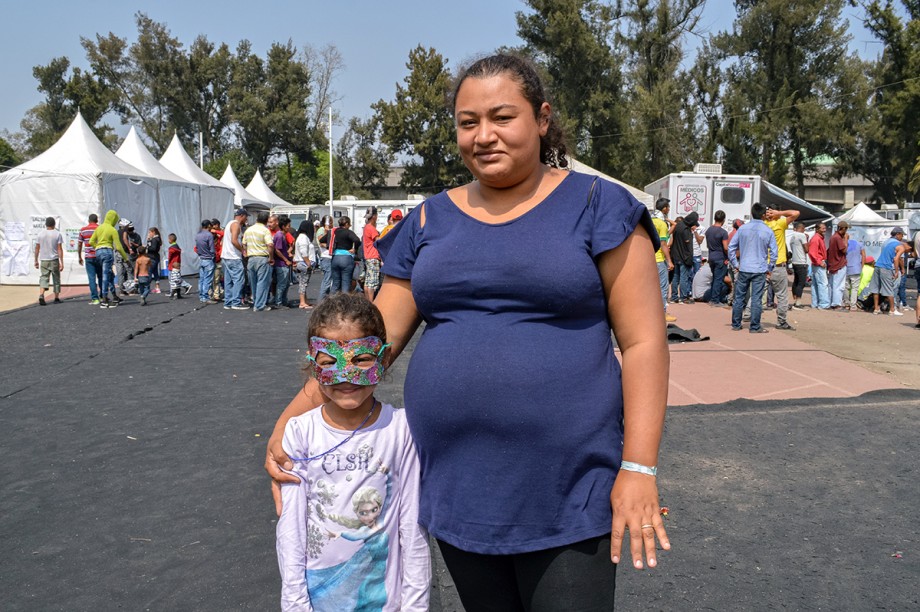 Rieecxy Mabely Escoto, 26, came to Mexico City from Honduras with her husband and 6-year-old daughter. She says she’s received prenatal care every day in the stadium where migrants are sheltered.

Escoto began her journey in January, leaving her home country of Honduras with her 6-year-old daughter and her husband. Now, they’re resting at a migrant camp located in the Jesús Martínez “Palillo” stadium, a sports arena in Mexico City. They plan to make their way to the U.S. soon, where Escoto hopes to be reunited with her mother.

For now, though, Escoto says she’s getting the prenatal care she needs.

“For the eight days I’ve been here, I’ve gone to check-ups,” she says. “They check my [blood] pressure and the baby’s heart, and they have given me folic acid.”

Between Jan. 27 and Feb. 23, more than 6,900 people from Central America came to the stadium, which has been serving as a temporary shelter since October 2018. 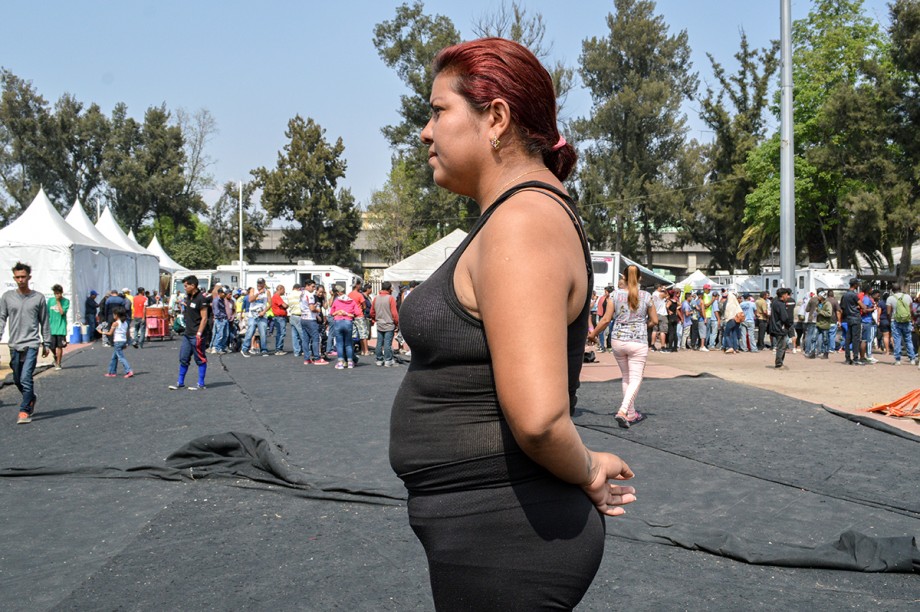 Her pregnancy nearly full term, Ana Carolina Rodríguez, 24, stopped in Mexico City on her journey from Honduras to the U.S. She began traveling north with her 7-year-old daughter in early 2019.

Romeo Adalid Martínez Cisneros, the local government’s director of health who coordinates medical services at the stadium, says everyone has access to food, water, electricity and medical care. It’s part of a city-run program specifically for migrants.

“They have a right to all the health services that can be found in Mexico City, as if they were Mexican – for free,” he says.

Mexican towns and cities have also provided assistance to people as they move through the country on their way to the U.S. There have been efforts to encourage Central Americans to apply for asylum in Mexico rather than push further north, and the number of refugee applicants in Mexico has grown in recent years. (Read more about those efforts here.)

For people housed in the stadium and other shelters in Mexico City, a vital piece of assistance is free reproductive health care for women, which includes pregnancy tests and medical supplies that pregnant women can take with them when they leave, Martínez says. For pregnant women, the program provides medication, vitamin supplements and other supplies. 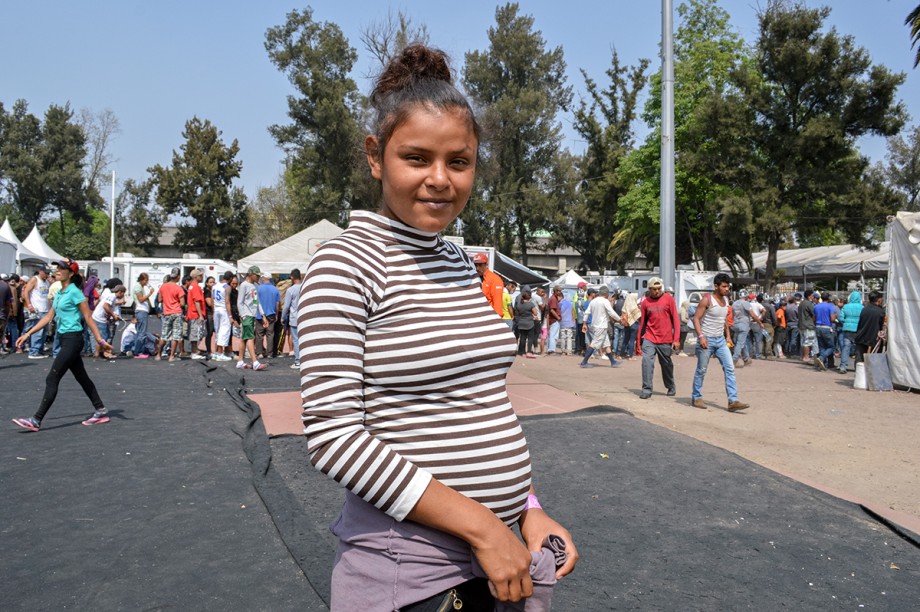 Marjorie Duan, 18, arrived in Mexico City from Honduras in early 2019. She was two months pregnant when she began her trip, which she hopes will end in the U.S., where some of her family members live. Duan says she’s received vitamins and folic acid at the shelter where she’s staying in Mexico City.

Pregnant women have access to local health facilities where they can give birth if needed, with support for cesarean sections and other surgeries, emergencies or other procedures. Contraception is given out and sexually transmitted infections are treated, Cisneros says.

Women also able to have abortions, which are legal in Mexico City, up to the twelfth week of pregnancy. Elsewhere in the country, abortion is much more strictly regulated.

According to data provided by the Mexico City government, health workers treated 73 pregnant women who were part of a group traveling during the last quarter of 2018. Of those, 49 women were in their first trimester, 20 were in their second trimester and four were in their third.

Milagro Sarahí Rivas, a 21-year-old from El Salvador, is seven months pregnant, but she says she wants to make it to the United States before her delivery date.

“Here, they are checking on me every day because I am on miscarriage alert,” she says, adding that she has been given folic acid and treated for a vaginal infection and a urinary tract infection while at the camp. 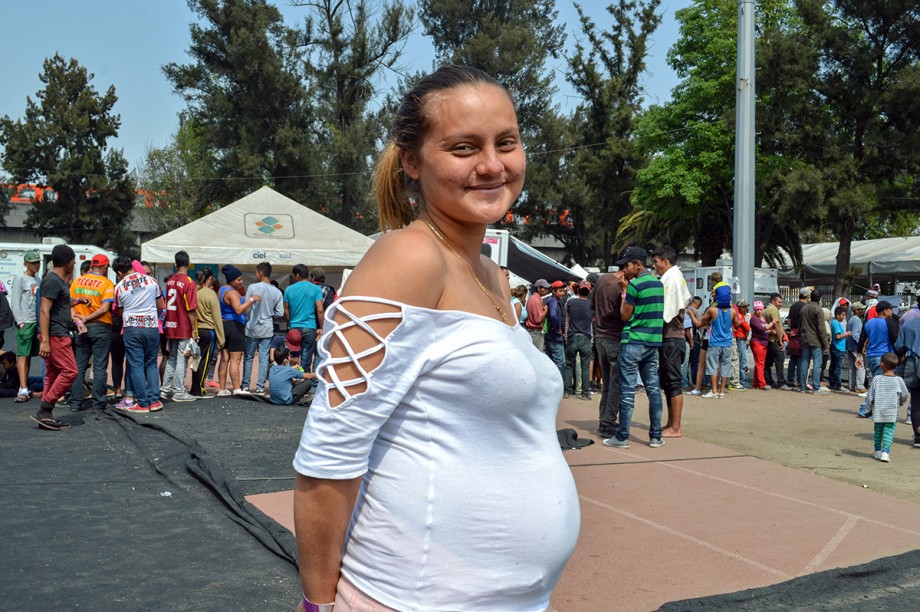 Milagro Sarahí Rivas, 21, joined a group of people traveling north from El Salvador when she was six months pregnant. She hopes to give birth in the U.S.

Claudia Tatiana Escobar, a 28-year-old migrant from Honduras, delivered her baby at a Mexico City hospital. She says she left Honduras with her husband and three children at the beginning of 2019 and joined a group heading north. She’d been in Mexico City for about two weeks when, during a medical exam, she was told that she was about to give birth.

“I went for three days of appointments at the hospital and on the third [day] I gave birth,” Escobar says. “They received me very well here. Everything has been perfect up to now. Since I arrived, they’ve cared for me.”

Escobar says she registered the birth of her fourth child in Mexico City. Even so, she says she plans to continue pressing north to the U.S. with her family.

Coming Soon: When the U.S. Pulls the Funding Plug, How Do Reproductive Health Providers Proceed?