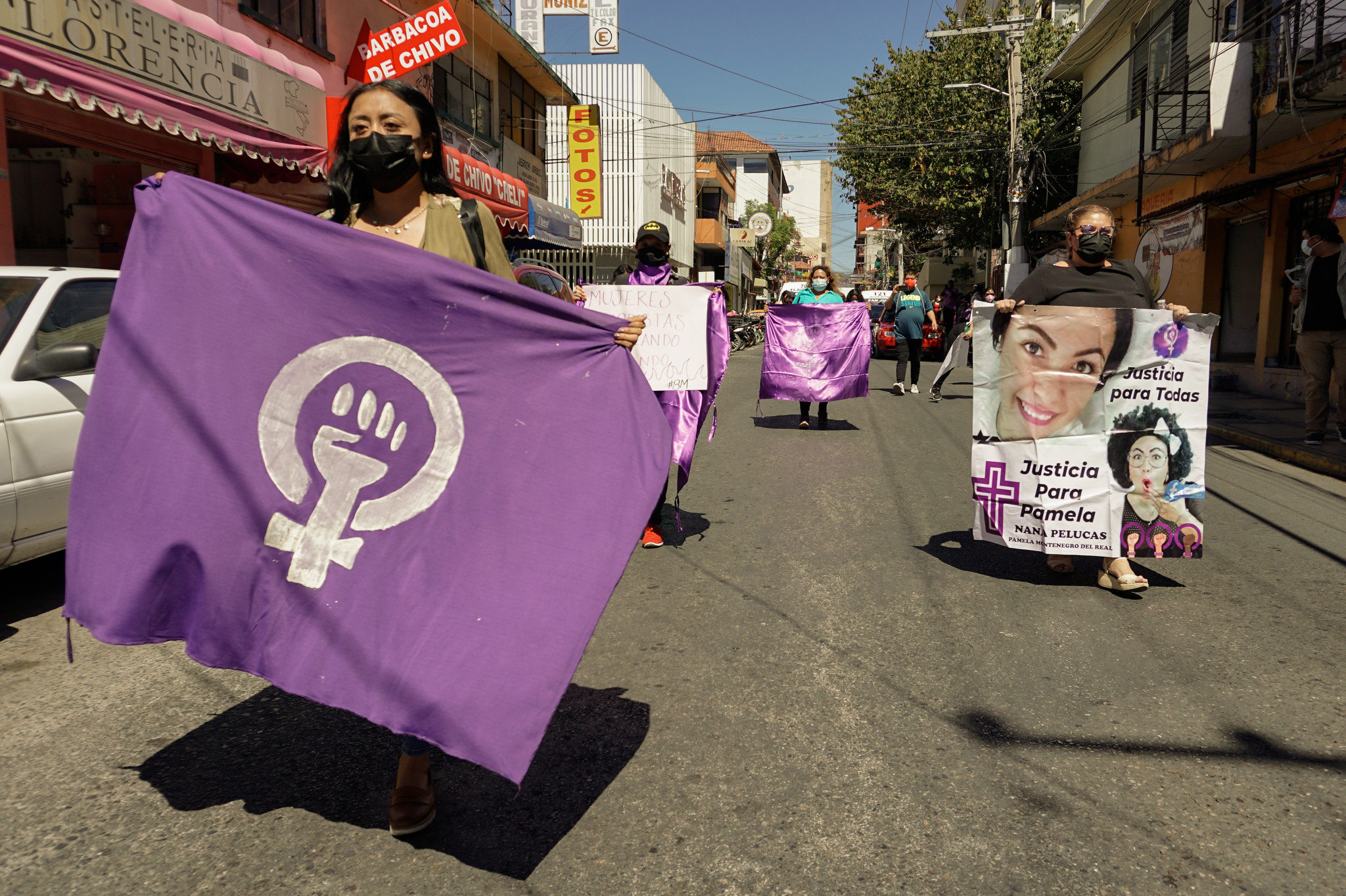 CHILPANCINGO DE LOS BRAVO, MEXICO — Antonio Muñiz Valadez has spent nearly a decade as a taekwondo instructor, teaching teenagers how to defend themselves, cheering them on at competitions, urging them not to give up.

His own dream was a career in photojournalism, forsaken a decade ago due to insecurity, physical as well as economic. He covered politics and “nota roja” — a genre of journalism pertaining to crime, accidents and gore — for several local outlets until one day, on assignment at a mayoral event, unidentified men pointed their guns at him. A warning, wordless but clear.

That day, he put down his camera. Almost a decade on, he is still conflicted. To bear witness, to inform, to speak truth to power — he still feels that calling.

Outside of an active war zone, Mexico is the world’s deadliest country for journalists, with more than 150 media workers killed since 2000, according to global watchdog Reporters Without Borders. More than 53 journalists have been killed since President Andrés Manuel López Obrador came to power in December 2018. At least 90% of these attacks are still unsolved. The murder of three journalists in the first days of 2022 sparked protests across 25 cities. Six days later, a fourth journalist was killed. At least 13 journalists have been murdered in 2022.

Threats to journalists stem from multiple sources, says Mireya Márquez Ramírez, a communications professor at Ibero-American University in Mexico City. Some get caught in the line of fire between cartels, some are attacked for reporting on organized crime, such as illegal logging or mining — especially in resource-rich states such as Guerrero, Oaxaca and Puebla — while others are targeted for political reasons, subject to stigmatization, verbal and physical intimidation, kidnapping and worse.

ARTICLE 19, an international organization that promotes freedom of expression and information, documented 692 instances of aggression in 2020, 343 of which came from the Mexican state itself. “It is true that this violence is inherited,” says Noemí Pineda Fierro, a Mexico-based researcher with ARTICLE 19, “but it has increased in this six-year term.” The current president has repeatedly attacked the press, rights groups say, using terms such as “biased,” “unfair” and “scum of journalism.” 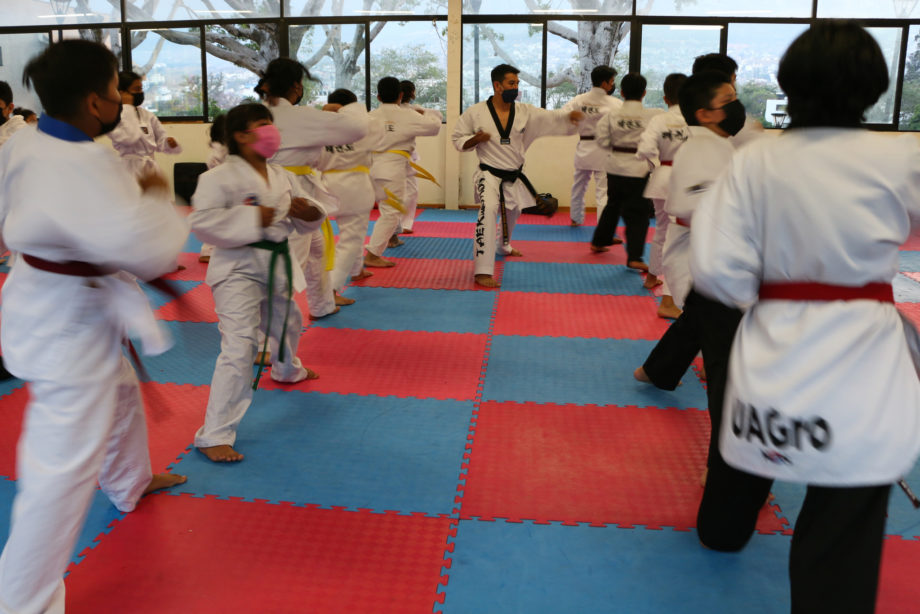 Antonio Muñiz Valadez, who now works as a taekwondo instructor, says he left journalism nearly a decade ago due to the physical and economic insecurity he experienced as a photojournalist in Chilpancingo de los Bravo.

“I’m more scared of the politicians,” says one reporter in Guerrero, who, fearing retribution, asked to remain anonymous. “I feel they’re more dangerous — the links between many politicians and criminal groups are well known.” As a result, the reporter takes great care to scrub their social media accounts of any political contacts.

Monserrat Ortiz says she began receiving threats on her personal Facebook account after she broadcast her investigation into a man with a history of violence against former girlfriends. In 2019, she enrolled in the Mechanism for the Protection of Defenders of Human Rights and Journalists. Created in 2012 and attached to the interior ministry, the mechanism provides camera systems, panic buttons, police protection and other assistance to those at risk. As of April, 521 journalists were enrolled in the system. But it is known to be overburdened, underfunded and understaffed, with a mere 45 employees for nearly 1,500 beneficiaries. Moreover, only 12 of Mexico’s 32 states have local protection units working in coordination with the federal mechanism. (Some states have created autonomous mechanisms.)

“They give you a panic button,” Ortiz says. “I promise you that if some hitman is going to kill me, they’re not going to wait for me to activate my panic button and a patrol car to show up 15 minutes later before they do so.” At least seven journalists were murdered while under state protection between 2011 and 2020, according to government data. Mexico’s interior ministry, the agency in charge of the federal mechanism, did not respond to requests for comment.

Guerrero is one of the states with the largest number of journalists enrolled in the federal mechanism — 51 — and one of six entities that account for more than half of nationwide instances of aggression against media workers. “This is a state where it’s dangerous to be a journalist,” says María de Lourdes Martínez Cisneros, head of the State Unit for the Protection of Defenders of Human Rights and Journalists. In 2021, in addition to monitoring attacks on the press, the unit offered courses on self-protection and best practices for nota roja. Many journalists, however, choose to relocate to continue pursuing journalism. There were 18 displaced journalists in Guerrero state as of March, Martínez Cisneros says.

In 2015, for instance, several journalists chose to move away after armed men threatened them in the municipality of Chilapa de Álvarez, about 55 kilometers (34 miles) from Chilpancingo, for covering protests against armed men who, describing themselves as citizen police, had taken over the city.

Beatriz García, 31, relocated to Chilpancingo after several colleagues left Chilapa. “I knew if I stayed there without the colleagues who’d made up my team, I’d have found a job doing something else,” she says. “If I wanted to stay in journalism, then I had to leave.” 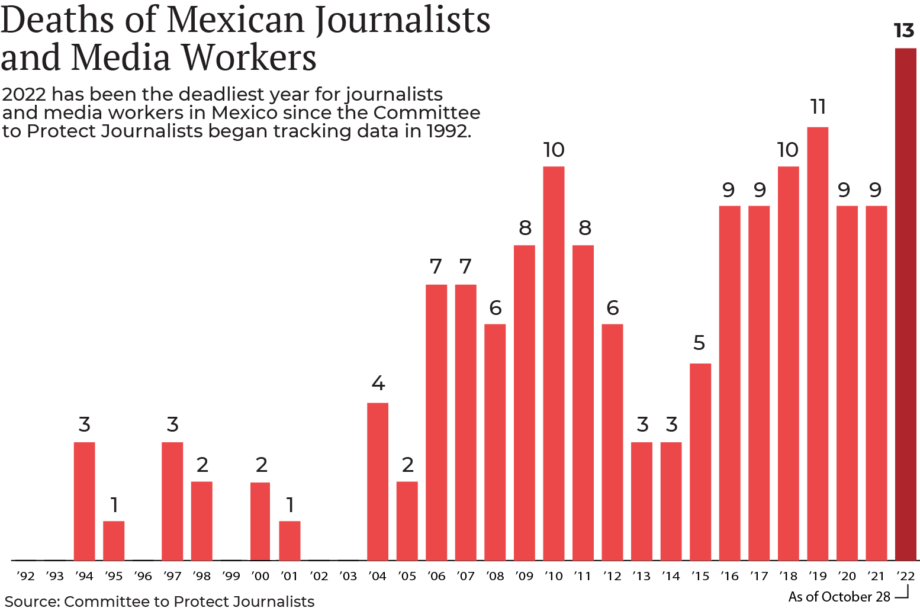 Those who stay have to devise new strategies. Luis Daniel Nava, who entered journalism in 2015, stepped back from the nota roja beat in Chilapa for a while. “My colleagues were no longer there,” he says. “I didn’t know if I was being watched. Before, we’d always go together, but you stop covering that kind of thing when no one can go with you.”

When a story is particularly sensitive, García sometimes requests that her byline be withheld. In a smaller town like Chilapa, with only a handful of journalists on a particular beat, this was not always an effective strategy. “Half the city knows that if you didn’t do the story, one of the others did it, and that puts you at risk,” she says, adding that in Chilpancingo, “it’s easier to camouflage yourself because there are more reporters.” Others suggest attaching multiple bylines to a story to distribute risk. “For difficult stories, we collaborate with colleagues in other parts of the country who investigate one part while we investigate another and publish together,” says Pedro Canché Herrera, a veteran journalist in the state of Quintana Roo who is enrolled in the government’s protection mechanism. “That helps a lot because then there is no longer just one head to chase.”

In Mexico, as elsewhere, journalism is an increasingly precarious industry, straining to sustain itself. It ranked among the lowest salaried professions in 2013, according to national employment data. Some 60% of journalists surveyed by ARTICLE 19 in 2020 had no social security, only half were working under a full-time contract, and more than three-fifths had suffered a reduction in income during the pandemic.

“We are being paid less and less, which I believe is also a way of gradually exhausting us journalists,” says Gabriela Minjares Baltazar, who is based in the border city of Ciudad Juárez. “Just as it is said that they are killing us journalists, they are also wearing us out … trying to disenchant us from journalism.” When she began working for a local newspaper in the mid-1990s, she says she had excellent benefits in the form of medical insurance, a vehicle and other equipment. When she left 21 years later, much of that support was no longer provided. “I think that the bad economic model that the media has followed has also depleted us in many ways,” says Minjares Baltazar, who dipped into her own resources to start an independent digital media outlet, La Verdad Juárez.

These economic factors contribute to each journalist’s calculus, spurring them to take unnecessary risks or refrain from pursuing certain stories. “Companies do not offer you training … so you have to design your own self-protection protocols,” Nava says. One journalist, who requested anonymity, describes how he keeps his sisters apprised of his whereabouts whenever he goes out to report. “These are the people I trust the most — and they are also my family, so if something happens to me, I want them to know where to find me.” 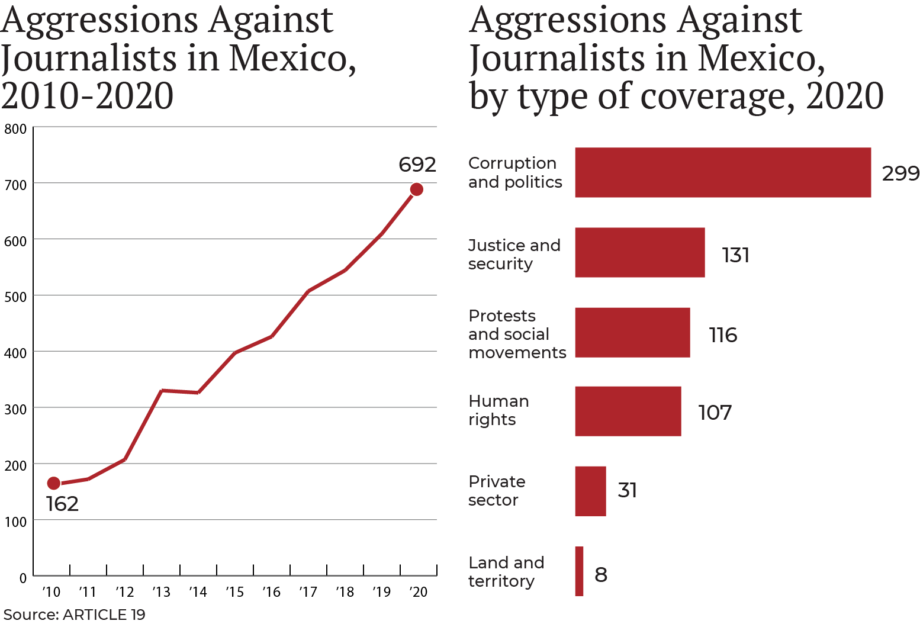 The López Obrador administration has proposed a major overhaul of Mexico’s protection mechanism and plans to introduce a reform. New legal initiatives will only be useful if the government responds to the needs of local journalists, says Pineda Fierro of ARTICLE 19, adding that existing laws are often wielded against journalists as intimidation. As many as 22 Mexican states, for instance, have laws criminalizing “halconeo,” a form of whistleblowing pertaining to confidential information about law enforcement, prisons and public security.

In the absence of institutional protection, Márquez says, many journalists are only protected by the strength of their personal reputation. “The more autonomous a journalist is, the more prestige and strength is gained. So that alone — in theory — should create a halo of prestige that protects them from potential risks,” she says. To contain the rising tide of violence, she stresses the need for journalists from different media to cooperate. If an instance of wrongdoing is reported by several outlets, she says, it is unlikely that all involved journalists will be killed. This may run counter to the competitive logic of the industry, but until the state prioritizes their security, Márquez says, Mexican journalists’ best defense may very well be solidarity.

Avigaí Silva and Mar García are Global Press Journal reporters based in Mexico.