Pulque was once the most popular drink in Mexico, but it fell out of favor in the 20th century. Entrepreneurs are working to restore the glory of this unique — and uniquely Mexican — beverage.

Pulque master Gaudencio “Shaggy” Díaz balances on the leaves of a maguey plant in the foothills of La Malinche volcano in Tlaxcala state. Díaz scrapes this maguey twice a day to extract nectar to make pulque.

TLAXCALA, MEXICO — On the slope of La Malinche volcano, Gaudencio “Shaggy” Díaz burrows between the flared inner leaves of a maguey plant taller than him. He scrapes its center for sap. Here, in the rural outskirts of one of Mexico’s smallest states, east of Mexico City, it is a dazzling morning: bright sun, blue sky. Díaz climbs down from the plant, fashions a little container out of a maguey stalk — known as a xoma, from the Náhuatl word “xomatli,” or “clay spoon” — and passes it to Jessica Vázquez Reyna, so she can taste what he has just extracted.

Díaz, nicknamed Shaggy because of a striking resemblance to the Scooby-Doo character — especially when he breaks into a crooked grin — is a tlachiquero and pulque master. He specializes in extracting aguamiel to produce pulque, a traditional alcoholic beverage about as strong as beer, milky white and slightly viscous, which has been produced in central Mexico for thousands of years. Díaz gleaned his mastery of pulque, and his intimate understanding of the maguey plants used to make it, from his father. This generational knowledge has been passed down over centuries. Vázquez, on the other hand, is a newcomer to the trade. A year ago, she took a leap of faith and bought a pulquería, a pulque tavern, in Tlaxcala city that she had long frequented.

But Vázquez and Díaz are united by a common desire: to revive the drink once known as the nectar of the Aztec gods. 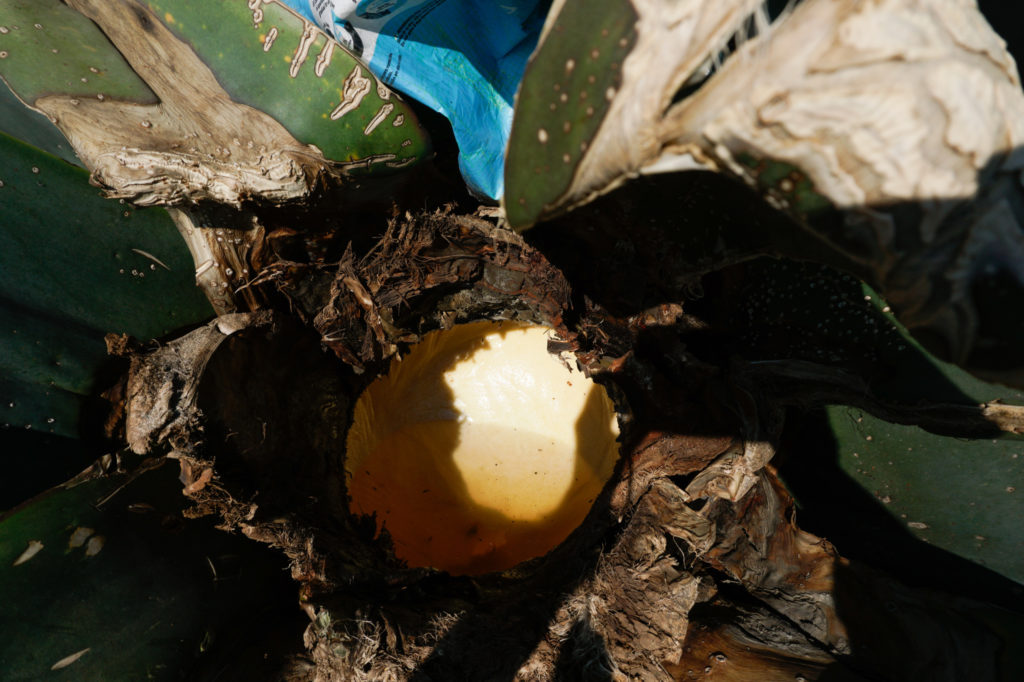 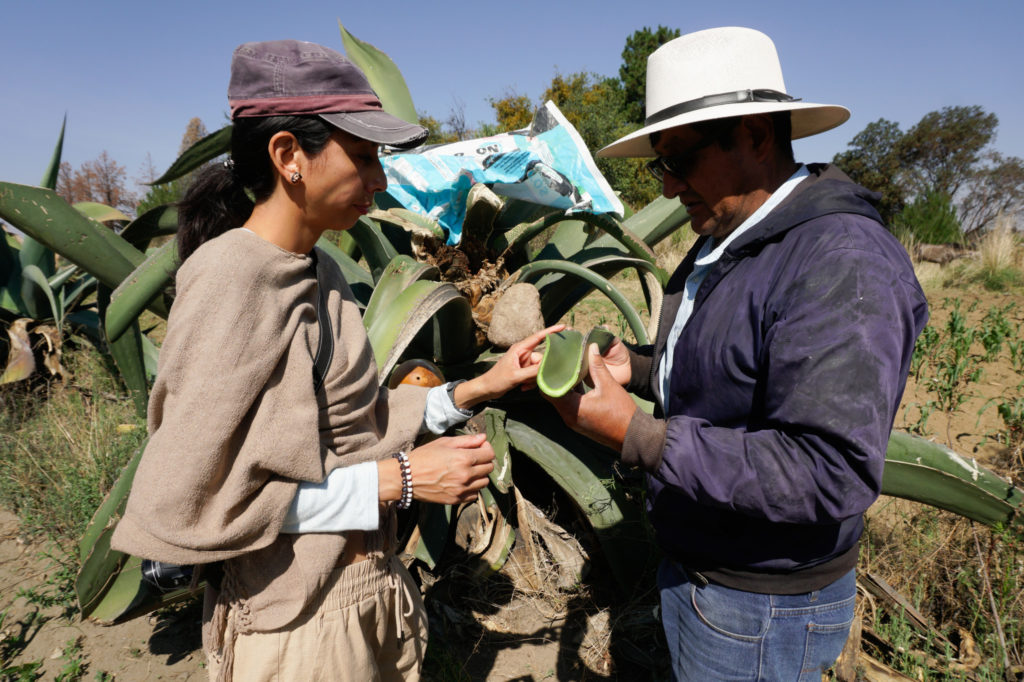 As the sun climbs the sky, they continue up the volcano, Díaz on a motorcycle with his wife, Vázquez tailing them in a car. The maguey are planted in mesurcos, or furrows: long narrow trenches, between fields of corn and fava beans, which help retain water and fight erosion. Díaz and Vázquez are quick to point out that the Agave salmiana, or green maguey, as it is commonly known, plays a crucial role in sustaining La Malinche’s forested foothills, which are prone to tree-killing bark beetles.

Díaz lives in a house in the shadow of La Malinche. When you enter, he plops a little rag doll of Shaggy, the cartoon character, on his shoulder — he’s in on the joke. In his house is a tinacal — from the Spanish “tina” and the Náhuatl “calli,” literally “house of the tubs.” It’s a little room, dark and cool, where Díaz strains freshly collected aguamiel to get rid of fruit flies, then pours it into vats to ferment. He says, “This is strong, the sort that makes you first say, ‘Oh, how delicious is this,’ then, ‘Where is more of this?’ and finally, ‘Where do I lie down?’”

Vázquez takes a sip, swilling it in her mouth, savoring its sweet and acidic notes. Pulque is typically a little sour and fizzy, an acquired taste. It is also known for its nutritional properties; it contains calcium, phosphorus, iron and vitamin C. In some rural communities, children drink pulque in the absence of safe, potable water. The pulque Díaz makes has a shelf life of three days. Vázquez calculates how much she will take with her. She’ll soon be back for more. “Pulque,” she says, “is a living drink.” 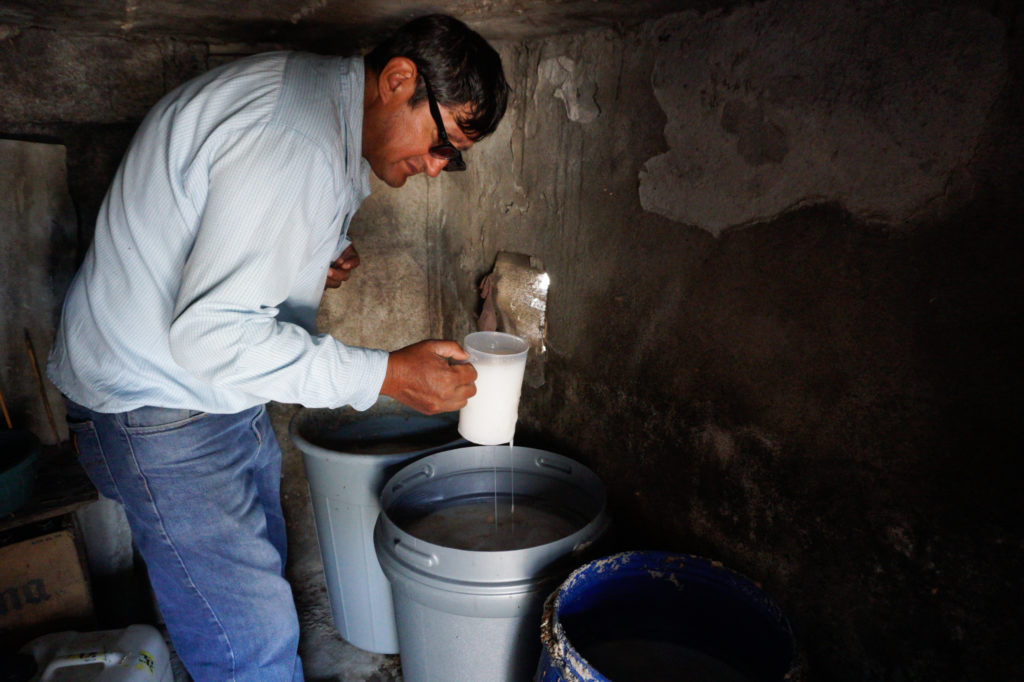 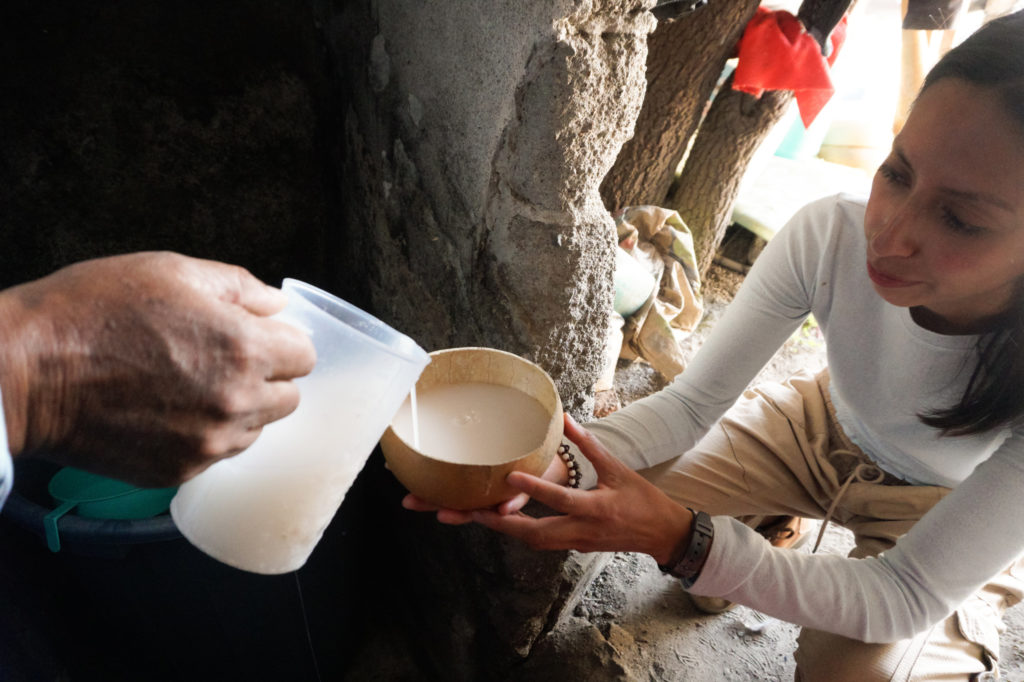 Gaudencio “Shaggy” Díaz pours a pulque sample for Jessica Vázquez Reyna in his tinacal — from the Spanish “tina” and the Náhuatl “calli,” literally “house of the tubs” — in San Pedro Tlalcuapan, Tlaxcala state.

Once upon a time, Ehécatl, Mesoamerican god of the wind and rain-bearing breeze and a manifestation of the great feathered serpent god Quetzalcóatl, met Mayahuel, goddess of fertility, in the sky. Together, they descended to Earth and transformed into intertwined branches. Mayahuel’s grandmother, livid at this development, ordered her death. A heartbroken Quetzalcóatl buried Mayahuel’s remains — and from there emerged the maguey plant, a bedrock of Aztec culture and cosmology. So the story goes.

Scientists date the origin of the agave genus, of which maguey is one species, to about 10 million years ago. Mesoamericans used the plant in many ways: thorns for ritual bloodletting, fibers for rope and fabric — and sap for pulque. Pulque consumption is a millennia-old tradition: An 1,800-year-old mural unearthed in Cholula depicts 164 people drinking the beverage, in varying states of intoxication. Among the Aztecs, pulque was restricted to gods and priests, only offered to commoners who were elderly, ill or had recently given birth. During Spanish colonial rule and after, anyone could drink it — and pulque soon exploded in popularity, accounting for 94% of all beverages consumed in 1882.

During the 20th century, however, it fell out of favor. By the end of World War II, it accounted for less than half of beverage consumption in the country. Rumors abounded that it was fermented using feces. People began to associate the drink with poverty, a notion encouraged by some politicians and the mainstream press to curtail public intoxication. Most decisively, however, beer entered the fray, replacing pulque as central Mexico’s beverage of choice. According to 2011 estimates from the National Institute of Public Health, 50% of Mexican men and 30% of Mexican women consume beer, whereas less than 5% of the population drinks local fermented beverages like pulque.

Pulque never disappeared altogether, says historian Ulises Ortega of Colectivo El Tinacal, a collective of pulque researchers. It was kept alive by informal vendors known as toreros, even as pulquerías dwindled to near oblivion. Vázquez, for instance, remembers that her grandfather was always drinking pulque — he even scraped his own aguamiel. “It was the drink he always had,” she says. “I think when I was little, I was given a sip — I don’t remember it well, but I don’t think I disliked it.” Today, pulque is produced mainly in the states of Hidalgo, Tlaxcala, Morelos, State of Mexico and Michoacán, and Mexico City.

Vázquez, who hails from a small town outside Tlaxcala city, worked as a tour guide and often explored the city on her own to discover hidden gems. In late 2020, deep in the throes of the coronavirus pandemic, she stumbled across a sign on the street: TACOS Y PULQUE. “I thought to myself, ‘Pulque? Here?’” Known then as Pulquería Los Jarritos, the bar was small, able to squeeze in no more than six tables — unassuming but inviting. “I walked in and liked it,” she says. She quickly became a regular. 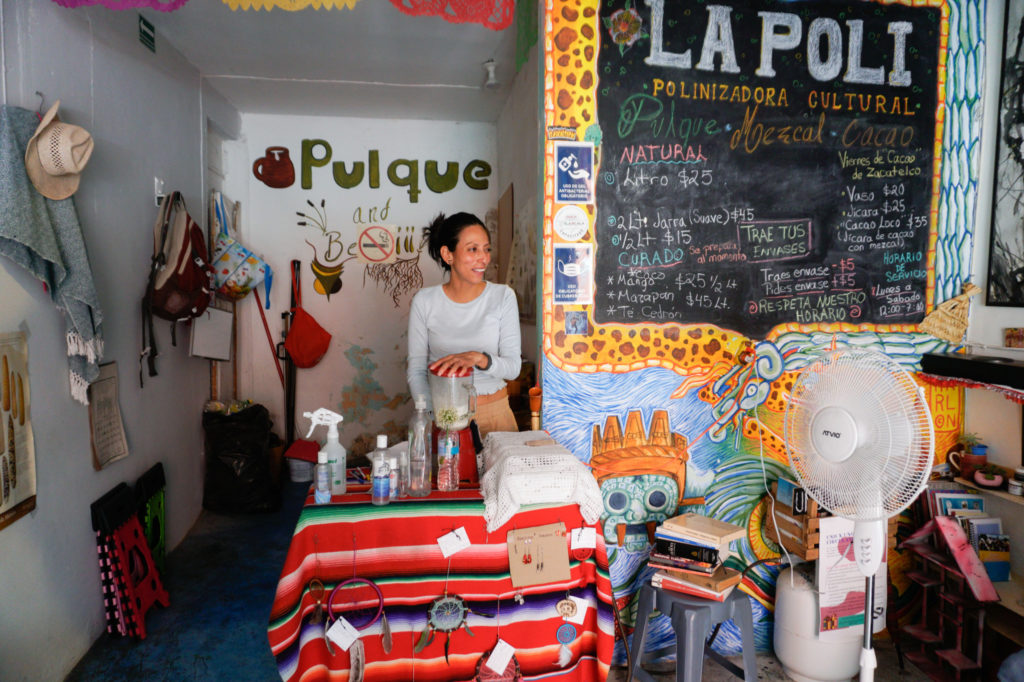 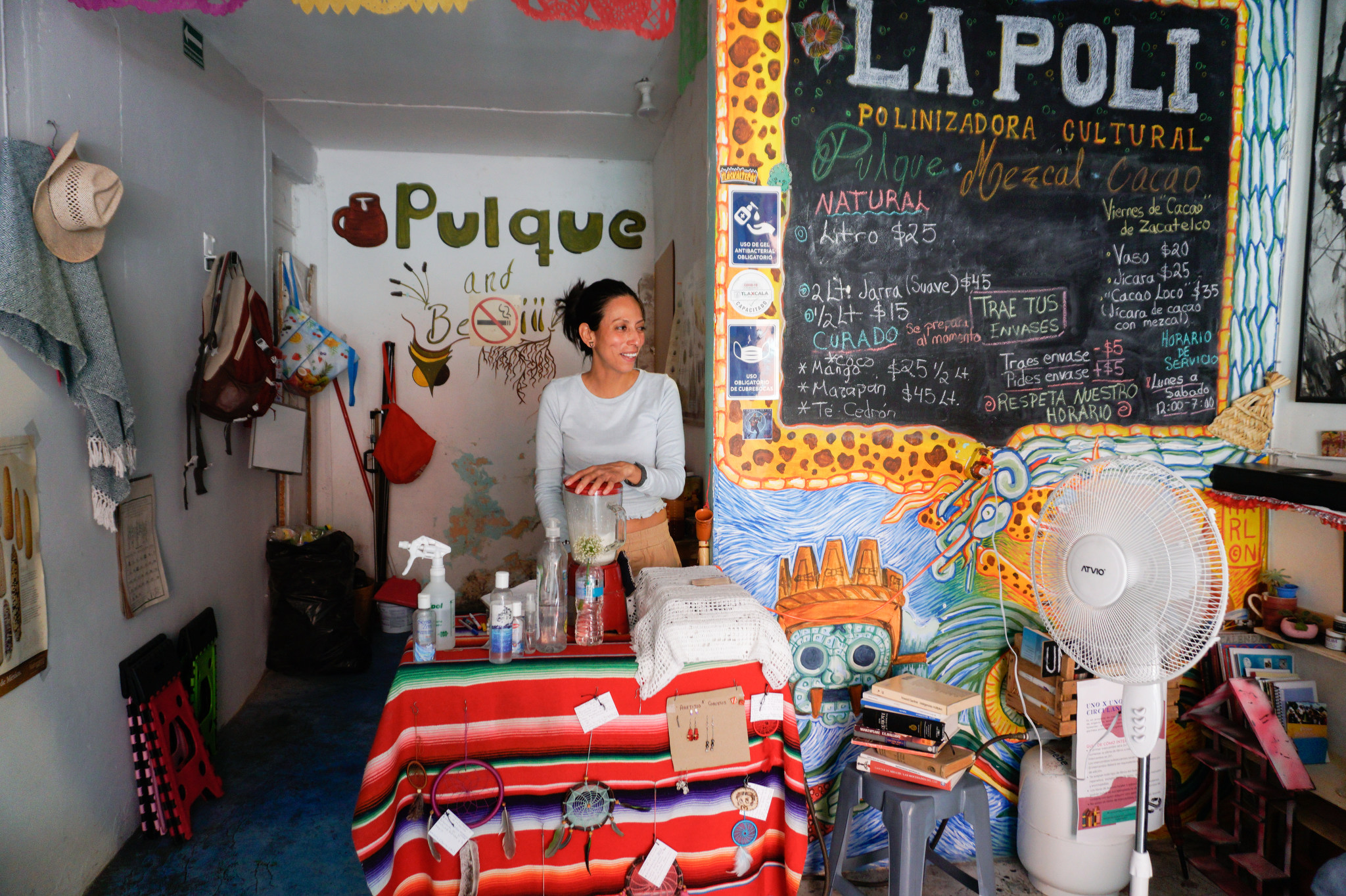 Jessica Vázquez Reyna, owner of pulquería La Polinizadora Cultural in the historic center of the city of Tlaxcala, prepares pulque for her customers.

Pulquería Los Jarritos is now called La Polinizadora Cultural, and it feels more like a cafe than a bar. On a typical day, painters and poets, students and teachers, office workers and housewives rub elbows, discussing their passions and pursuits: plastic art, photography, a children’s library. Mexipop singer Don Castrejón, who has been drinking pulque since 2015, comes every day; he lives two doors down. “I have found artists and very nice people here,” he says. “This really is a cultural pollinator rather than a cantina — I come here to feel good.” Then, he breaks into a classic early-20th-century Mexican bolero.

In the 1980s, says historian Ortega, newspapers warned of the imminent extinction of pulque, arguing that it needed to be rescued, that it was a mystical beverage and integral to Mexican culture. In subsequent decades, the number of pulque-related cultural offerings grew: books, courses, guided tastings and tours. But it wasn’t until the 2010s that pulque consumption rebounded, Ortega says. And when beer supplies became scarce during the coronavirus pandemic, Mexicans once again turned to pulque. 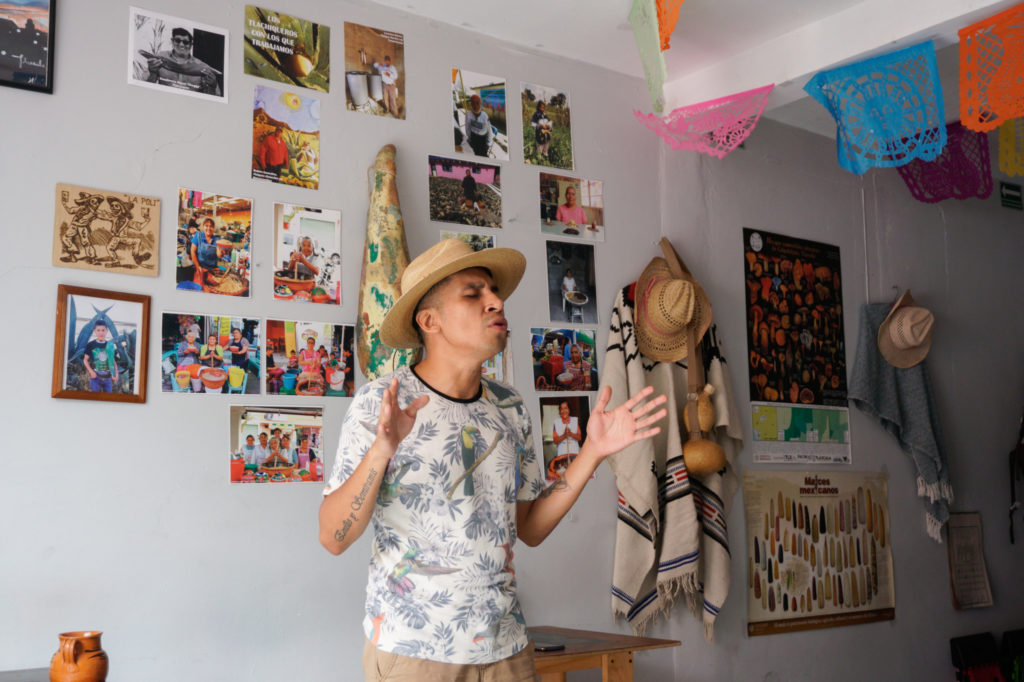 Don Castrejón, a regular at pulquería La Polinizadora Cultural, sings a Mexican bolero. He lives two doors down and says he comes here “to feel good.”

Running a pulquería is not easy, even today. A swirl of taboos still haunt the beverage: Women, for instance, are typically told to stay away, especially if they are menstruating; some aspect of their womanhood will purportedly spoil the beverage. Operating a bar as a woman also tends to raise eyebrows: How will she handle rowdy drunkards or dodge harassment or work late nights without a man?

Vázquez, 30, was determined but nervous. The first day, “I didn’t want any customers to come in,” she says sheepishly. The first thing she did was stop selling beer, a bold move since it was typically the most popular beverage. Many disgruntled patrons stopped coming, but those who loved pulque stayed — and they keep coming back. 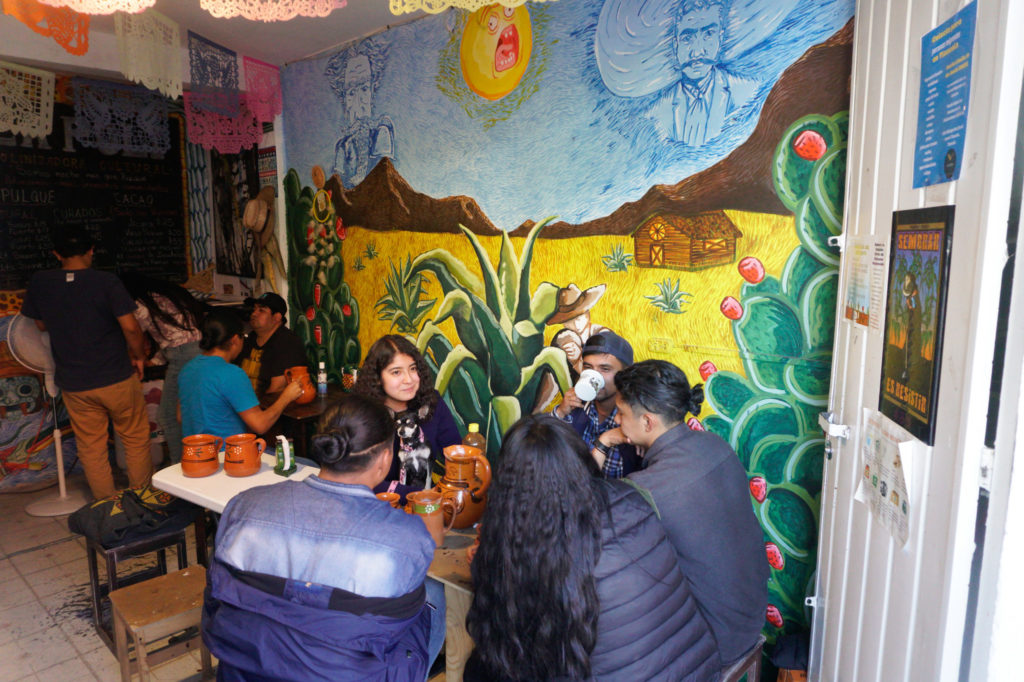 Customers huddle over mugs of pulque at La Polinizadora Cultural, in the historic center of Tlaxcala city.

Some hope to popularize pulque beyond Mexico, a particularly challenging task given the drink’s limited shelf life. One such company, Penca Larga, exports bottled pulque to Arizona and California. There is great demand for their product in the United States, says Felipe López, the company’s director of marketing. Regular pulque drinkers tend to be skeptical, however. “There were those who said it was disrespectful to bottle pulque,” López says. “However, our vision is to generate an industry around pulque, an industry that provides jobs and makes a Mexican product available to all our compatriots in Mexico and the United States … within reach of anyone who wants to open their refrigerator at any given moment, take a bottle and drink a pulque.”

Vázquez’s motivations are different. She knows that revival can easily veer into commercialization and gentrification. Tequila and mezcal, also agave products, are instructive examples. She wants to popularize the drink to support and honor agave producers and tlachiqueros like Díaz. All the customers at La Polinizadora Cultural, for instance, know where their pulque comes from: names; details; stories; the particular confluence of culture, geography and circumstance that produced that particular batch of the beverage. Vázquez is also quick to remind her customers that they are consuming “a living beverage that evolves with each passing moment, that defies the logic of an industrialized product that you can buy at any hour of the day.” Pulque is forever changing. This, too, is a form of resistance.