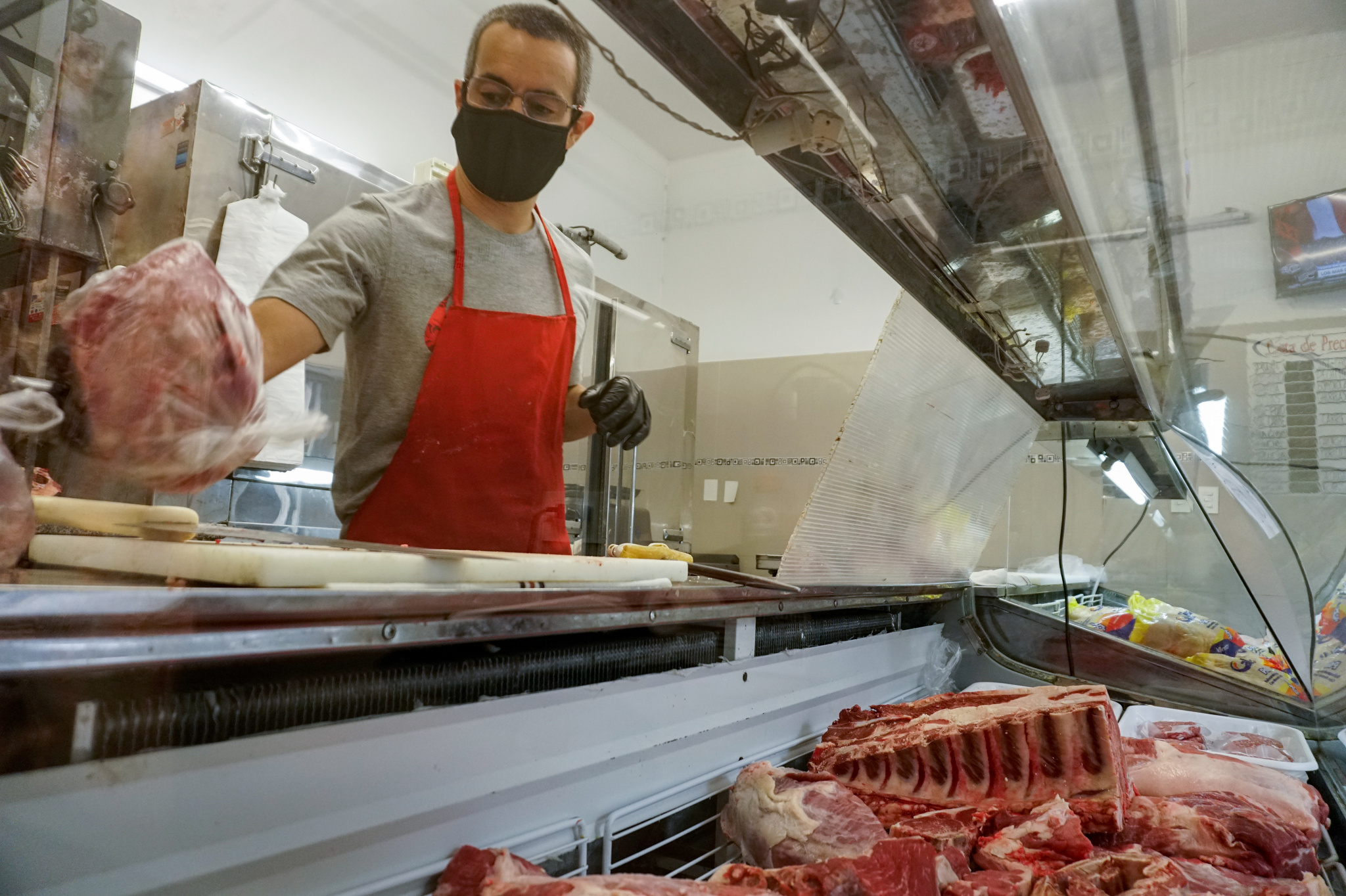 BUENOS AIRES, ARGENTINA — In beef-mad Argentina, every occasion is an occasion for barbecue, or asado. Birthdays, Mother’s Day, Christmas. The school year ending. The week ending.

Historically, Argentine beef has been cheap, and so plentiful that the government buys it for soup kitchens. It permeates the culture as charcoal fumes do air: To ruin something is to “escupir el asado” – spit the roast. Survive a rotten day? “Te comiste un garrón” – you ate the cow leg.

While the pandemic tanked the international price of beef, by February, the cost of Argentine beef had soared 73% compared to the prior year, according to the Argentine Beef Promotion Institute. In 2017, Argentines consumed the most beef per person in the world: 54.2 kilograms (119 pounds). That’s dipped to 49 kilograms (108 pounds), among the lowest rates on record. 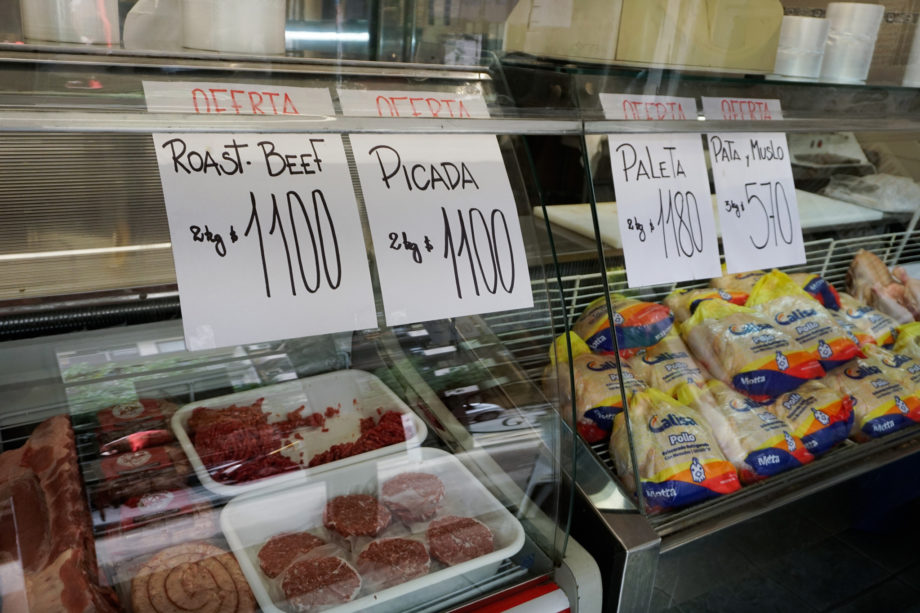 Cuts of beef are displayed in Ezequiel Souto’s butcher shop. Industry analysts say beef prices soared in part because investors saw cattle as a safe bet during the uncertainty of the pandemic.

“Eating beef is a luxury now,” says Elizabeth Alvarenga, 35, who works at a soup kitchen in the Villa 21-24 neighborhood in Buenos Aires. Las Lomitas serves dinner and snacks to about 250 people a day. Years ago, the kitchen plated beef four times a week. Now, only once a week. At home, Alvarenga’s own table is often devoid of asado – she bakes spinach pie instead. “Any cut of meat is sky-high. And meat is essential for us,” she says.

When Spanish colonizers arrived in the Americas in the 1500s, they brought cattle with them. In the Pampas, the vast, grassy plains of central Argentina, cows encountered no natural predators, according to an article in the journal Animal Frontiers, which focuses on animal agriculture. Black-and-white herds soon speckled the country.

Today, Argentina is one of the world’s top beef producers. And though Argentines devour more chicken and pork than ever, rib-eye and tenderloin remain central to national identity.

“It was almost a betrayal of the homeland to become a vegetarian,” says Lautaro Colombatti, a 26-year-old motion graphic designer who hasn’t eaten meat in five years.

Asado – the name of both the cut of beef barbecued and the barbecue itself – harks back to gauchos, or skilled horsemen, who would grill some of the cows they hunted. It’s among the few cuts consumed by rich and poor alike, according to Animal Frontiers. 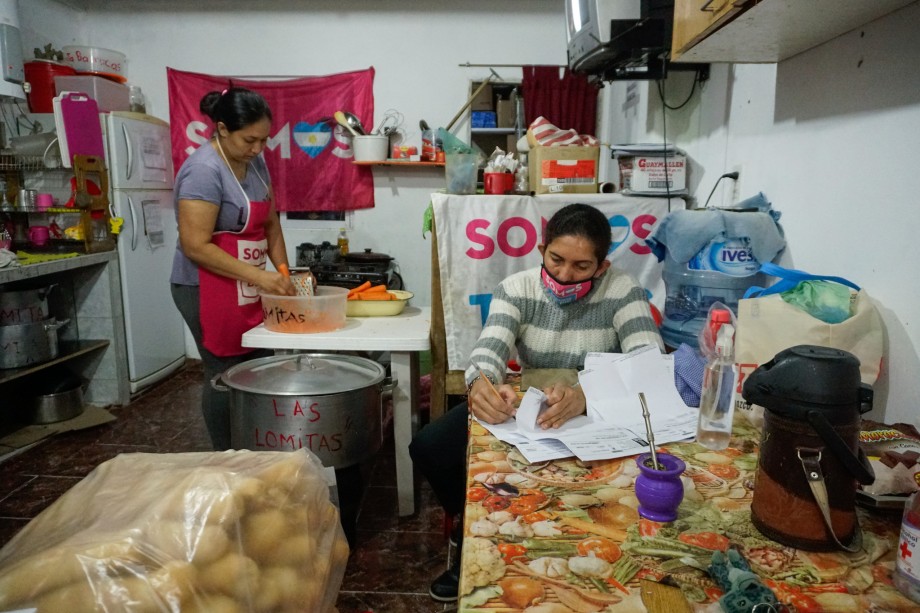 Elizabeth Alvarenga chops carrots at the Las Lomitas soup kitchen in Buenos Aires, while Lilian Rosana Gómez Ovando checks paperwork. Years ago, the kitchen plated beef four times a week. Now it does so only once a week.

“The asado is more than the meat; it is a social practice that extends throughout the territory and all social classes,” says Alejandro Grimson, an anthropologist at the National Board of Scientific and Technical Research. Even vegetarians attend asados, bringing their own eggplant and squash.

One of President Alberto Fernández’s campaign promises was to curb hunger, and last year, he introduced Alimentar (To Feed) cards, debit cards that give low-income families grocery money. But that cash buys fewer and fewer items.

In May, the basic food basket, a term for the food an average household needs, cost 53% more in greater Buenos Aires than it did last year, according to the National Institute of Statistics and Censuses. The beef surge was the largest, and disproportionately robbed lower-income workers of asado.

Unionized employees, such as doctors and police officers, can bargain for pay raises to cope with inflation. Independent workers, such as electricians and plumbers, can’t. In a country with staggering income inequality, affording beef has become yet another class divide. 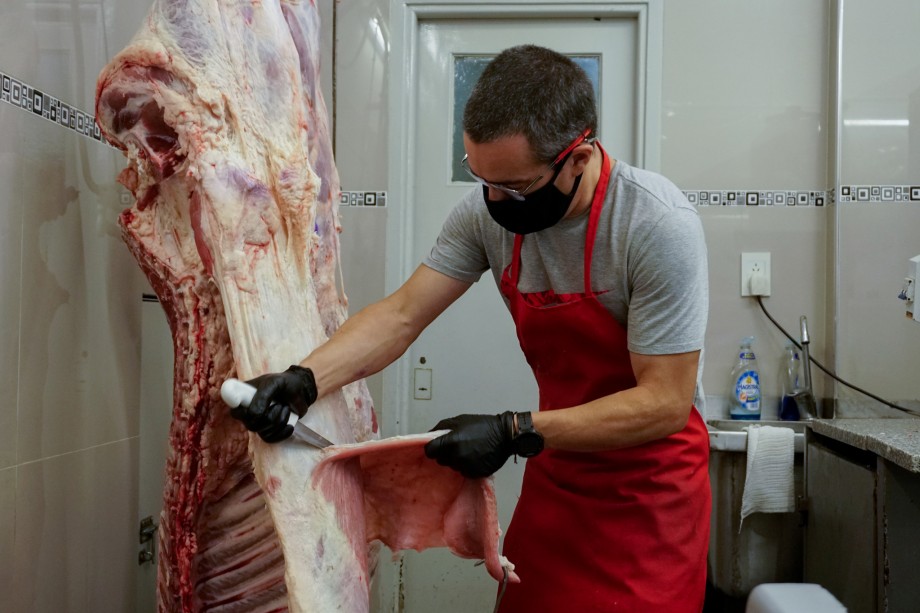 Butcher Ezequiel Souto slices into a half-carcass of beef. Because of the increase in prices, his customers are buying less beef or switching to chicken instead.

In recent months, hundreds of Argentines have joined protests calling for price controls and better-paying work. “These people are never going to be able to buy a plate of churrasco,” or skirt steak, says Dina Sánchez, a spokesperson for one of the protest organizers, Popular Front Darío Santillán, a social and political movement.

Recognizing beef’s cultural import, Argentine politicians have historically tried to cap its cost, according to the Animal Frontiers article. Fernández’s administration is no different. Earlier this year, the government made a deal with the meat industry to slash prices on asado, matambre and other cuts.

“Because Argentina is a meat-producing country … we cannot allow the population not to have access to it or to have to pay international prices when it is produced in our territory,” the Ministry of Productive Development said in a statement. The selected cuts “are most popular and representative at the tables in our country.”

But as of May, the price controls only applied to 8,000 tons of beef per month, according to the state news agency. Argentines consume 20 times that much. People asked their butcher what day the reduced-price beef would arrive and mobbed the shop when it opened. Alvarenga says she would pay part of her butcher bill before a shipment even arrived – it was the only way to guarantee affordable steak.

“The asado is more than the meat; it is a social practice that extends throughout the territory and all social classes.”Alejandro GrimsonAnthropologist

The administration is trying other remedies. In May, officials temporarily suspended beef exports in an attempt to increase domestic supply, but beef producers balked and refused to sell cattle for a week. Starting next year, the government will require meat processers to sell individual cuts to butchers, as opposed to half-carcasses. Experts expect this to lower production costs and, by extension, retail prices.

Ezequiel Souto is skeptical. A 41-year-old butcher, he runs a small shop amid the restaurants and craft breweries of Buenos Aires’ Parque Chacabuco neighborhood. In February, he sold at least 800 kilograms (1,764 pounds) of beef a week. In March, that dipped to 600 kilograms (1,323 pounds).

“The customers I have buy less often. There’s no money,” he says from behind a glass-covered array of roast beef and minced meat, or picada. If he went into business today, he says, he’d open a dietética – a health food store.