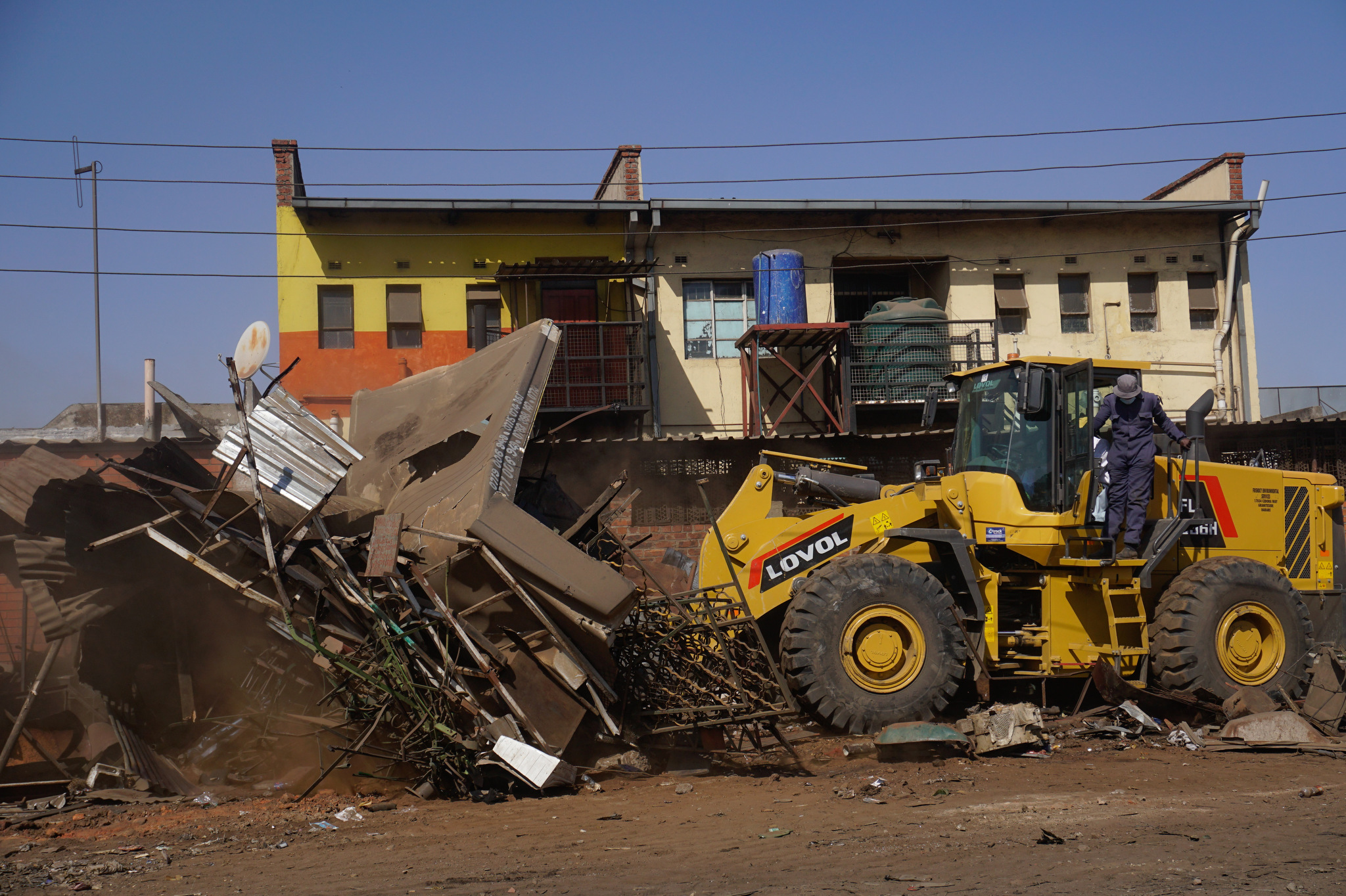 HARARE, ZIMBABWE — Around midday at a shopping strip called Gazaland, a mustard yellow tractor roars through a warren of small businesses, razing everything in its path.

“I wasn’t even given a warning,” says George Chikuvire, a car parts supplier. “If I had known, I would have moved my stuff elsewhere.”

The 48-year-old stands next to dozens of traders, watching the scrap metal pile up through dust clouds. Within a few hours, all of their livelihoods had been destroyed.

It was the latest in a wave of demolitions the city council had ordered in Harare, Zimbabwe’s capital, as part of a growing clampdown against unregulated buildings. But small-business owners allege the council is the one acting illegally by sitting at the center of rampant land corruption.

Like most informal merchants in Zimbabwe, Chikuvire possessed no documents proving his right to operate from the site. Yet for the last three years he had been paying a land baron $50 a month for the privilege. On the day of the demolition, this man was nowhere to be seen. 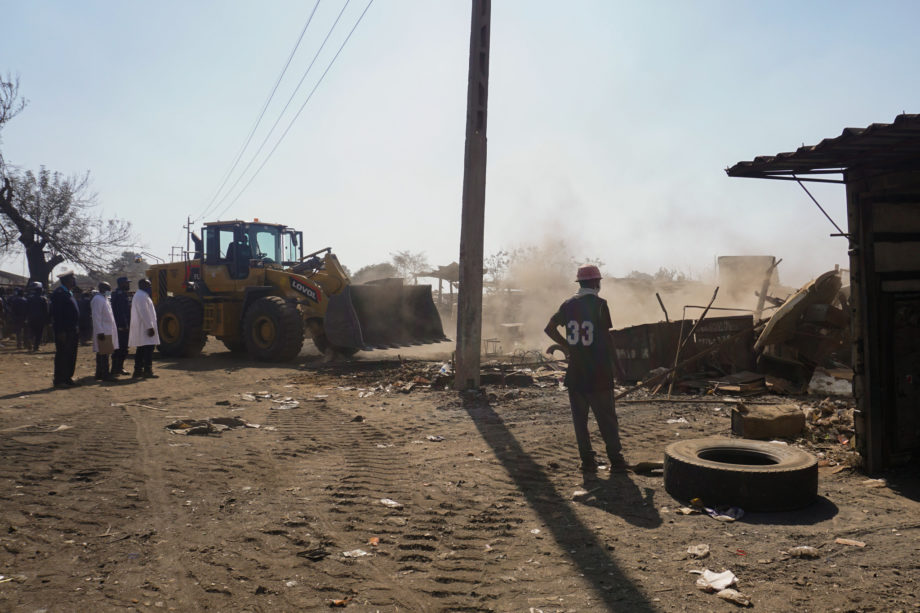 Officials say the number of fraudsters selling or leasing council-owned land to traders has been “mushrooming.”

The number of fraudsters claiming ownership of council land that they then sell or lease out has been “mushrooming,” says Michael Chideme, a spokesman for Harare City Council. He says this increase has driven the latest clearance surge.

“People defy the law. People invade land. People occupy land they are not entitled to settle on,” he says. “Land should only be bought or rented through official council channels.”

Ruramai Mbombi says she did exactly that two years ago. The mother of four built a small grocery store on a bustling roundabout used by commuters in southwest Harare – after securing official permission, she says. The 40-year-old describes how she went to Harare City Council with about 20 other traders to speak to the district officer. “We were directed to the marketing officer, who then came with us here and gave us permission to build our shops,” she says. “We paid them both a fee.”

The initial permit cost each trader $100, Mbombi says, and was followed by random payments to council officials who turned up ad hoc.

In mid-June authorities demolished every structure on the roundabout without notice. Mbombi didn’t file a complaint. “It’s a waste of time,” she says. “The police and the council work together; it’s a web of corruption.” A few months later vendors had mostly returned to the same spot with makeshift stalls, selling fizzy drinks or boiled corn to passing travelers as bus conductors hawked tickets.

In response to Mbombi’s accusation, Chideme says the council doesn’t comment on individual cases but that any staff found selling or renting land illegally should be arrested.

“The police and the council work together; it’s a web of corruption.”Ruramai Mbombismall-business owner

The pace of law enforcement, however, lags well behind that of demolitions. “So far no council employees have been convicted,” he says, but adds that authorities have arrested some land barons. “We wait for the courts to give their verdict.”

It’s not possible to obtain the number of prosecutions underway for land corruption, but the entrenched problem goes right to the top in Zimbabwe. At least two former ministers have been arrested in recent years for corruption over the allocation of state land.

But it’s overwhelmingly the rural and urban poor who bear the consequences of ongoing land conflicts in a country where most of the population relies on informal trade to make a living.

Tinashe Stephen Chinopfukutwa, a human rights lawyer, points to local authorities’ “corruption or inaction” in allowing irregular structures to take root in the first place. Researchers also refer to the inadequate supply of affordable housing or business plots as economic upheavals since the late 1990s have caused rural-to-urban migration to soar.

The scale of the problem is apparent as clearance operations are raging beyond the capital.

In the city of Mutare, in eastern Zimbabwe, Malvern Munhumumwe is struggling to find a new location for his tire repair business after authorities flattened his shop in June. “I was surprised because I pay shop license fees to the local council, but am now told the place is illegal,” Munhumumwe says on the sidelines of the demolition. Even though he received a warning letter, the clearance still surprised him, and he lost $400 worth of equipment. 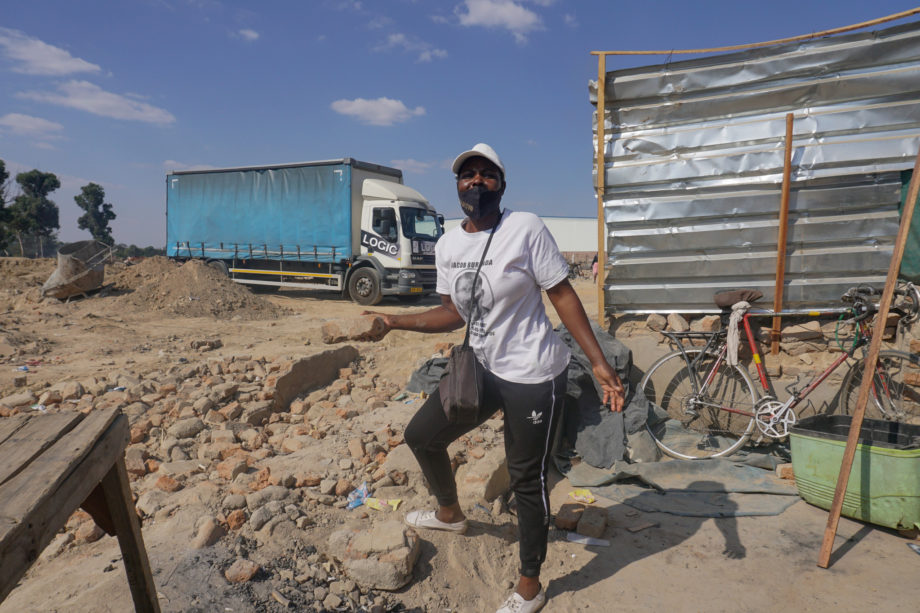 After authorities destroyed Ruramai Mbombi’s grocery store in a June demolition, she has resorted to selling shoes and towels from a makeshift stall in the same spot.

Spren Mutiwi, a public relations officer at Mutare City Council, says the site where Munhumumwe worked was “not designated for business.” He didn’t provide any further clarification on the case.

In a telephone interview, Mutare Mayor Blessing Tandi stressed that traders need to follow rules. “It may appear cruel, but from the onset it was avoidable,” he says of the recent clearance, suggesting that some people cut side deals to fast-track building while others may have been duped. “We encourage anyone who needs workspaces to come to us and be allocated proper places to build if it is available.”

But many cities are failing to make land available for small-business owners.

It’s unclear exactly how many illegal structures have been destroyed this year. Both Chideme and Tandi say the figures were not officially documented. But they each estimate that officials have razed hundreds of homes and shops in Harare and Mutare in 2021.

The future feels more uncertain than ever for Zimbabwe’s traders. In Harare, Mbombi now sells shoes and towels from her makeshift stand, looking out for prowling officials demanding further bribes, she says. As the family breadwinner, she has found it challenging to earn enough to feed her children. “The government should promote our work,” she says, “rather than being barriers to our only sources of income.”