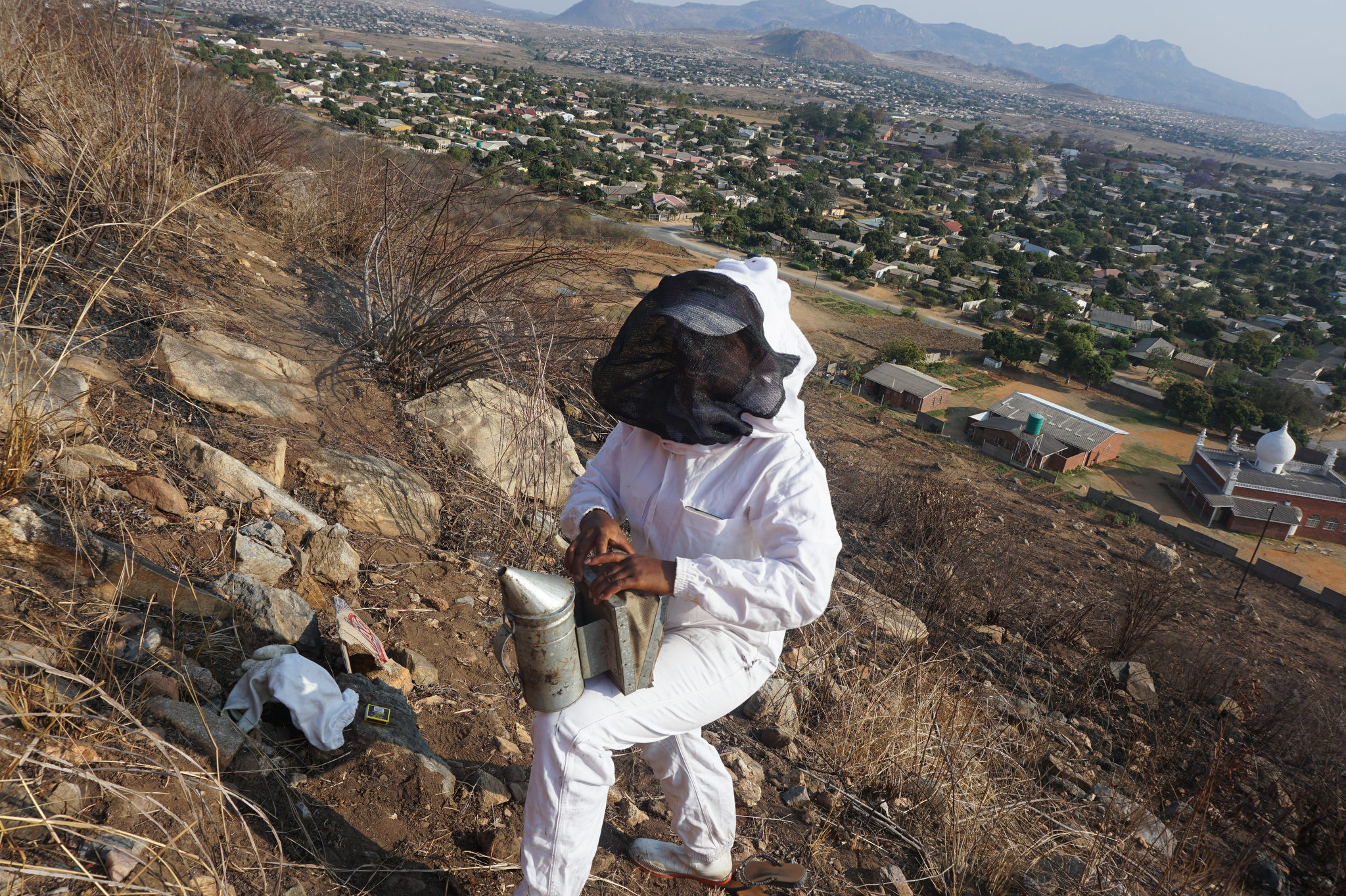 MUTARE, ZIMBABWE — Clad in a white protective suit from head to toe, Willett Mtisi lights a smoker in her hands. As soon as the teapot-shaped device begins releasing smoke to tranquilize the bees, she blows out the match — and stomps on it to be sure. Then she inspects the hives.

A beekeeper for more than a decade, Mtisi pauses only to pull out the tall grasses that have sprung up in her path, another fire prevention strategy she acquired from the country’s Environmental Management Agency.

“If I throw [the match] away with just a small flame, it could be disastrous,” she says, slowly tiptoeing around some of the 110 hives she cultivates in Zimbabwe’s Eastern Highlands. “Just a slight blow from the wind will turn into a veld fire.”

Her concerns are well-founded. Not far from here, in Honde Valley on the country’s eastern border, charred stumps and black soot mark the remains of a pine tree plantation destroyed by last season’s veld fires, the regional term for wildfires. Veld fires can burn through more than a million hectares (about 2.5 million acres) of Zimbabwe’s forests, pastures and crops every year. Rising temperatures, less predictable rainfall and human error are largely to blame, says Tatenda Mutasa, a climate change scientist in the Ministry of Environment, Climate, Tourism and Hospitality.

Zimbabwe’s veld fires are often caused by farmers seeking to clear land, miners improperly disposing of cigarettes and campfires, or hunters aiming to flush out animals. After suffering years of devastating fire seasons, which run from July to October, timber companies and government agencies have joined forces on prevention strategies — including investing in community beekeepers to safeguard the forests.

Timber plantations grow wattle, pine and gum trees across 180,000 hectares (over 444,700 acres), according to 2017 data from Zimbabwe’s Forestry Commission. The Timber Producers Federation, the country’s association of timber growers and sawmill operators, reports that more than 10,000 people work in various stages of harvesting and producing the wood used for construction, charcoal, furniture, paper production and electrical poles, including $20 million in exports for 2021.

“The timber industry is now under threat with many years’ worth investment of timber trees being wiped out by veld fires,” says Kingstone Chitotombe, Environmental Management Agency manager in eastern Zimbabwe’s Manicaland province, about a four-hour drive from the capital city of Harare. “Timber is a major contributor of foreign currency in the country through exports. This is bad for business for timber-estate owners.” 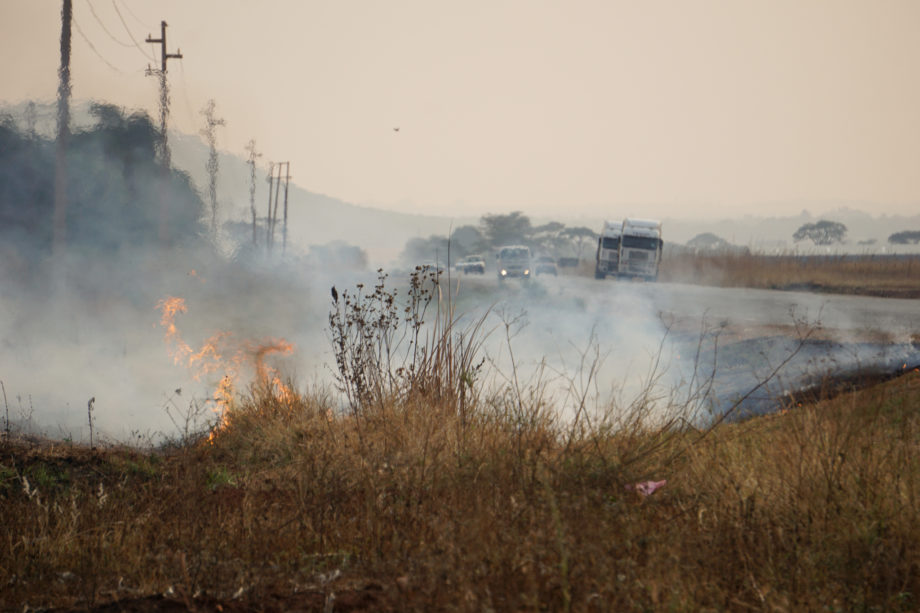 This veld fire, one of 3,848 reported during the 2021 fire season, damaged the highway near Chegutu, in north central Zimbabwe.

Most timber plantations are owned by three corporations: Border Timbers, Allied Timbers Zimbabwe and The Wattle Company. After years of losing millions of dollars and thousands of hectares of mature trees — which take at least 15 years to replace — companies have resolved to step up their fire prevention and firefighting efforts: investing in fire protection vehicles, equipment and firefighter training; increasing security patrols; funding drone technology and satellite systems; and training communities in fire awareness.

“We are working with community leaders, particularly chiefs and headmen, to superintend over environmental issues in their areas,” says Darlington Duwa, CEO of the Timber Producers Federation.

The effort has produced some success. In 2019, 2,073 hectares (over 5,100 acres) of timber were razed by veld fires; in 2020, 3,458 hectares (more than 8,500 acres) of timber worth over $5 million were lost. Last year’s losses are still being verified, but the Timber Producers Federation estimates them at closer to 1,000 hectares (under 2,500 acres), despite a spike in veld fires reported nationwide. 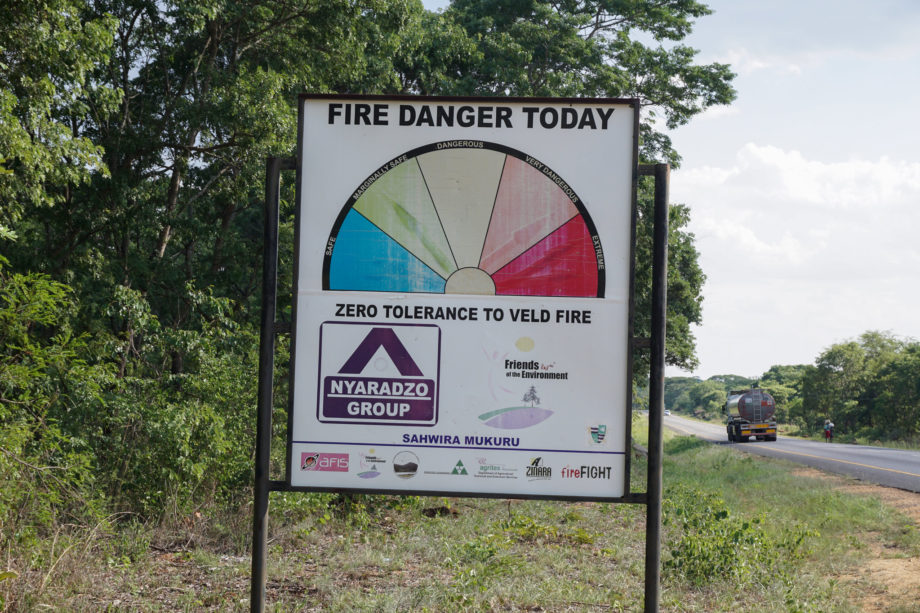 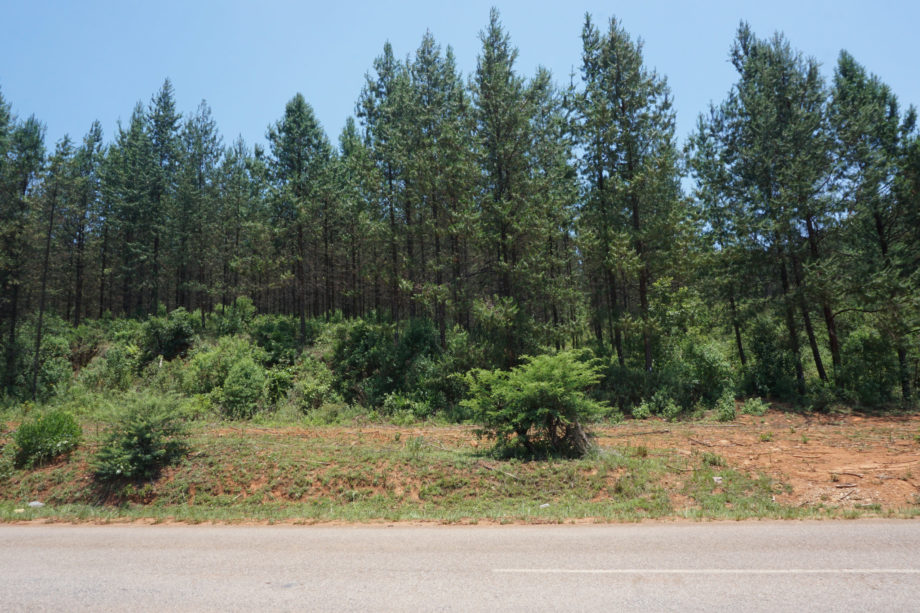 Timber estates in the Manicaland province have installed more warning signs and fireguards to protect their properties from motorists and other visitors who may accidentally start veld fires.

Federation members credit their increased focus on fire prevention and awareness efforts for minimizing the damage at the local level. “We also acquired roads equipment for maintaining our roads in order to improve on accessibility of plantations in the event of fire outbreak,” says Veronica Gutu, a spokesperson for Allied Timbers Zimbabwe.

The timber industry now supports community grass harvesting, hay baling and beekeeping projects as alternative income sources and conservation strategies for areas that are vulnerable to the fires, including timber estates. When grass is kept short around forests, hunters don’t feel tempted to start fires in order to spot animals, and the resulting hay can be sold to feed livestock, providing another income source for the region. 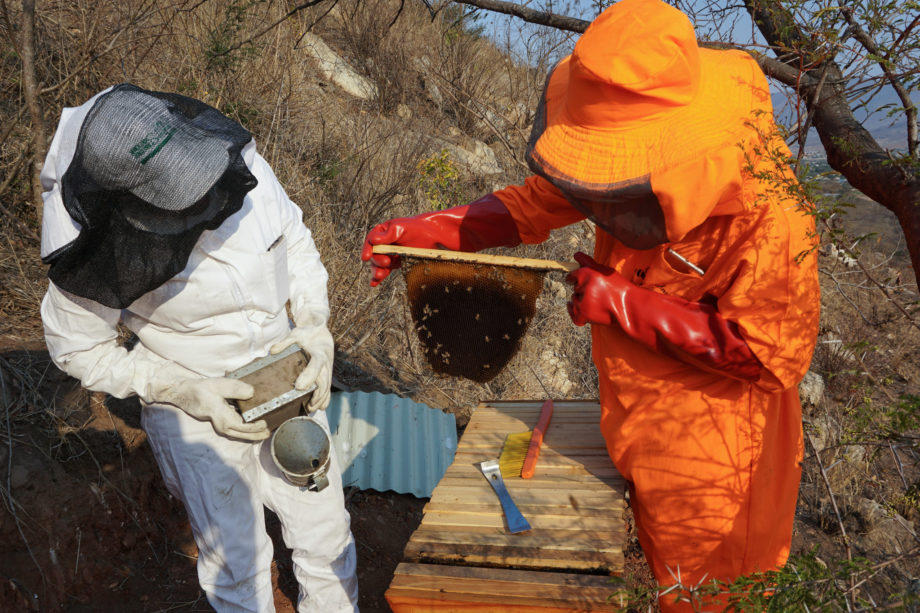 Willett Mtisi, left, and Ishmael Sithole inspect the health of bees after opening a hive during a 2020 visit. Beekeeping generates income for them while also helping protect the local forests from fires.

Beekeepers also take greater care with the land to protect their investments; each hive can generate $72 per harvest from the sale of honey and beeswax.

“This involves the communities to be custodians of their environment and help in the policing,” says Alice Chivese-Rutsvara, education and publicity officer with the environmental agency in Manicaland. Mtisi agrees: “All these benefits make us protect jealously the areas where we do beekeeping.”

The agency has trained more than 7,000 beekeepers across seven provinces, including 5,000 in Manicaland, with timber companies providing hives for communities near their estates.

Ishmael Sithole, a beekeeper in Mutare since 2014, has grown his business to more than 200 hives. “If one has hives in the forest, when the fire season arrives, they will find ways to safeguard that area from veld fires and arsonists,” he says. “So beekeeping plays a pivotal role in preservation of forests.”