The Toxic Toll of Gold

Mercury exposure can be deadly. So why are gold miners in Zimbabwe using the dangerous chemical — and risking their lives and the health of their communities in the process?

The young men brace for the first shock of cold water as they enter the river, easing their way into another day of illegal gold mining.

David Mauta and Wisdom Nyakurima, both 18, stand knee-deep in the Odzi River near the eastern Zimbabwe mining city of Mutare and shovel gravel onto a woven mat. They hinge their hopes on finding flakes of shiny gold. But it’s another metal whose dangers they don’t recognize that may have a more lasting impact.

Every day, they touch and breathe mercury, a silverly chemical element that carries deadly implications. The toxic liquid metal is key to their gold-mining efforts, as is the government, which purchases their gold even as officials vow to eliminate mercury’s use. The young men are unregistered artisanal miners, freelance workers who don’t have a license to operate. They sift through rocks in the river and dump beads of mercury over the sediment, which clings to gold. Then they light a match, using the flame to separate the mercury from the gold, a process that shoots toxic vapors into the air.

Inhaling these fumes or regular contact with mercury can each have devastating effects on the nervous system and prove fatal, according to the World Health Organization. The chemical quietly invades the body and leads to brain damage, developmental disorders in infants and young children, and irreparable kidney damage. Elemental mercury, the liquid form, can travel through the air and settle on land or in water, making it a pernicious threat to people and animals.

Miners from Indonesia to Peru have turned to mercury for decades to extract prized gold. So much so that the United Nations Environment Programme says artisanal and small-scale gold miners make up the biggest source of mercury pollution in the world. It’s one of the few chemicals considered so detrimental that more than 100 countries have agreed to end its use.

Zimbabwe joined them last year by ratifying the United Nations Minamata Convention on Mercury, an international treaty adopted in 2013 that seeks to phase out the metal to protect human health and the environment. The government also passed a law last year that bans mercury use in or near rivers, which carries a heavy fine and up to 12 months in jail. But the practice continues unabated here as workers like Mauta and Nyakurima remain unaware of the law and the health risks — and the government continues buying gold from artisanal miners at an increasing pace. 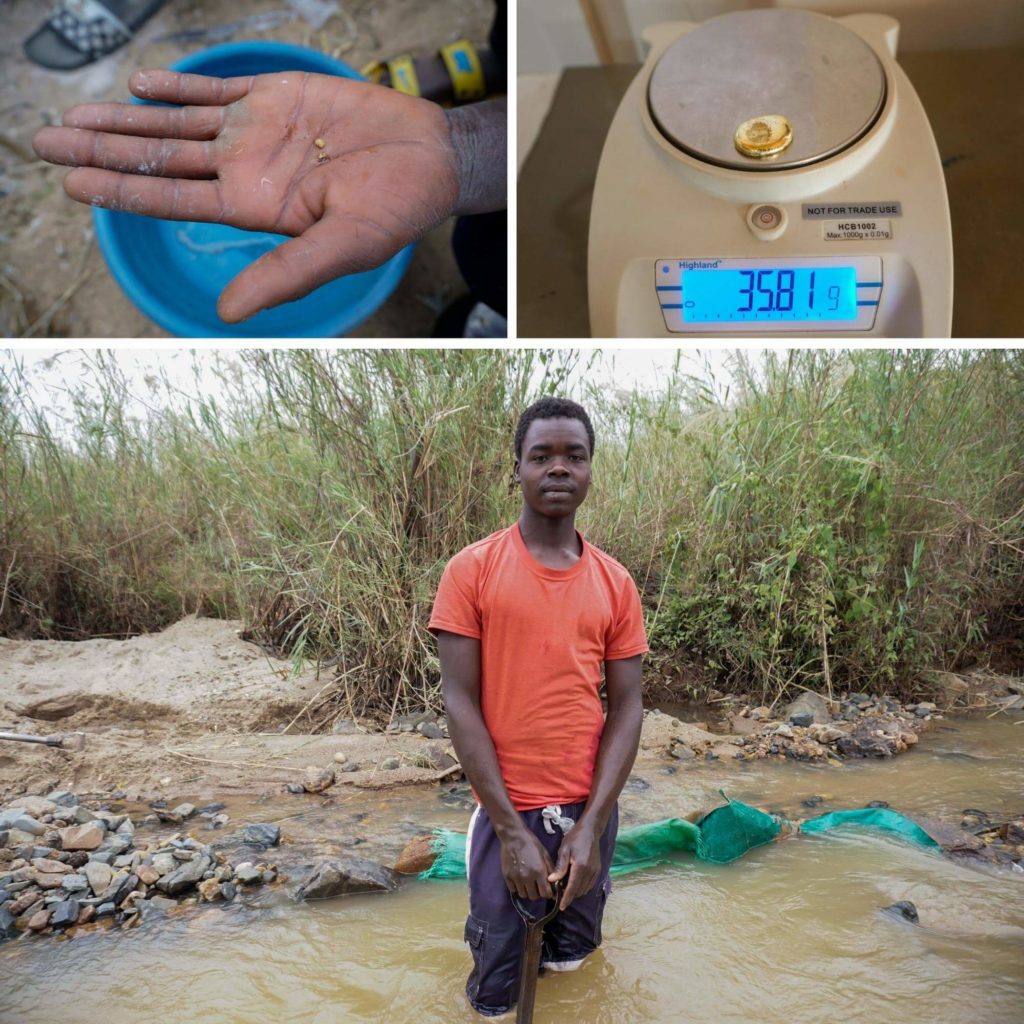 Linda Mujuru, GPJ Zimbabwe Artisanal miner Wisdom Nyakurima, 18, mines for gold along the Odzi River using mercury, the use of which Zimbabwe has vowed to eliminate.

“Government is happy with the rise in gold output from artisanal and small-scale miners, and yet this gold is produced through the use of mercury,” says Farai Maguwu, executive director of the Centre for Natural Resource Governance, a Mutare-based nonprofit that recently released a report documenting how officials buy gold without regard to its production. “Benefitting from economic activities that use mercury is illegal.”

Global Press Journal first documented the widespread use of mercury among Zimbabwe’s artisanal miners in 2017, before the country ratified the treaty.

Today, about 500,000 artisanal miners operate without a license, according to official figures. The majority live in poverty as the country’s economy is marked by inflation and raging unemployment.

Zimbabwe’s mining officials claim they aren’t violating the treaty or the law and insist they are balancing economic needs with health concerns. “The convention does not say that you must eliminate use of mercury; because if we did that, these miners will now have to find some other source of livelihood,” says Danmore Nhukarume, director of metallurgy in the Ministry of Mines and Mining Development. “We cannot prescribe them to stop. We have livelihoods that depend on the [mining] sector. We must ensure that they are protected and we move with them as we transform from mercury use [to] mercury reduction to mercury elimination.”

The Minamata Convention doesn’t give a set timeline to reduce the use of mercury among artisanal miners, although it does require countries to develop an action plan within three years and to work toward its elimination. Nhukarume says Zimbabwe is on track to do so; a report on its progress is due to the U.N. at the end of the year. He calls the plan “our guiding document toward making mercury history.”

Zimbabwe also has received technical and financial support from the Minamata Convention and others to strengthen the adoption of mercury-free technologies, says Amkela Sidange, environmental education and publicity manager at Zimbabwe’s Environmental Management Agency.

Anesu Freddy, a spokesperson with the United Nations Development Programme, which is leading the organization’s mercury elimination efforts, referred questions about Zimbabwe’s adherence to the convention to the government. 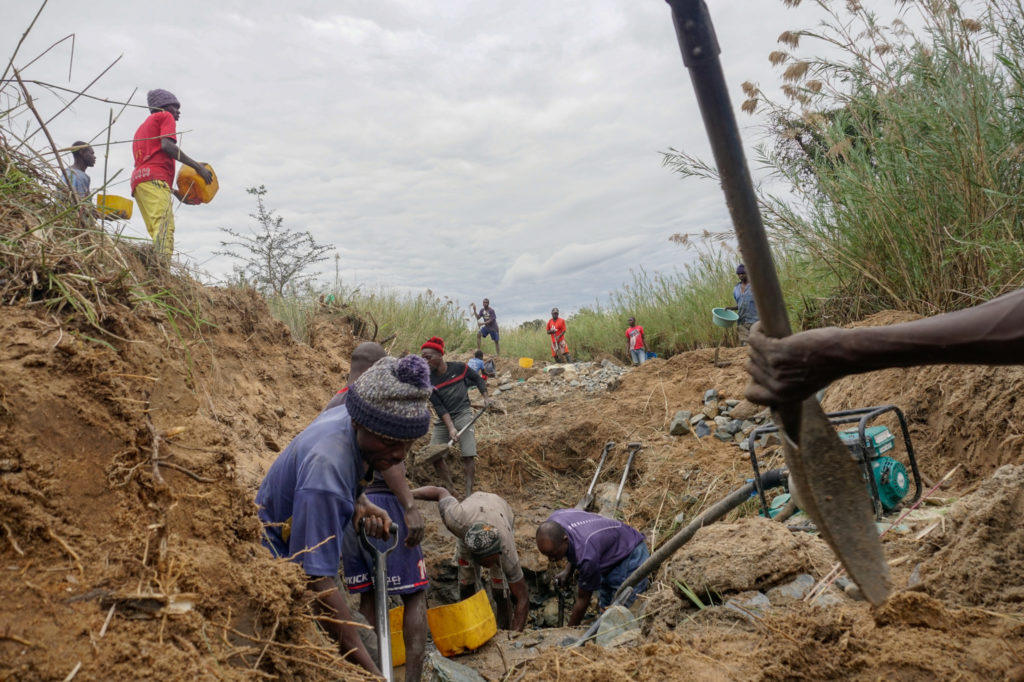 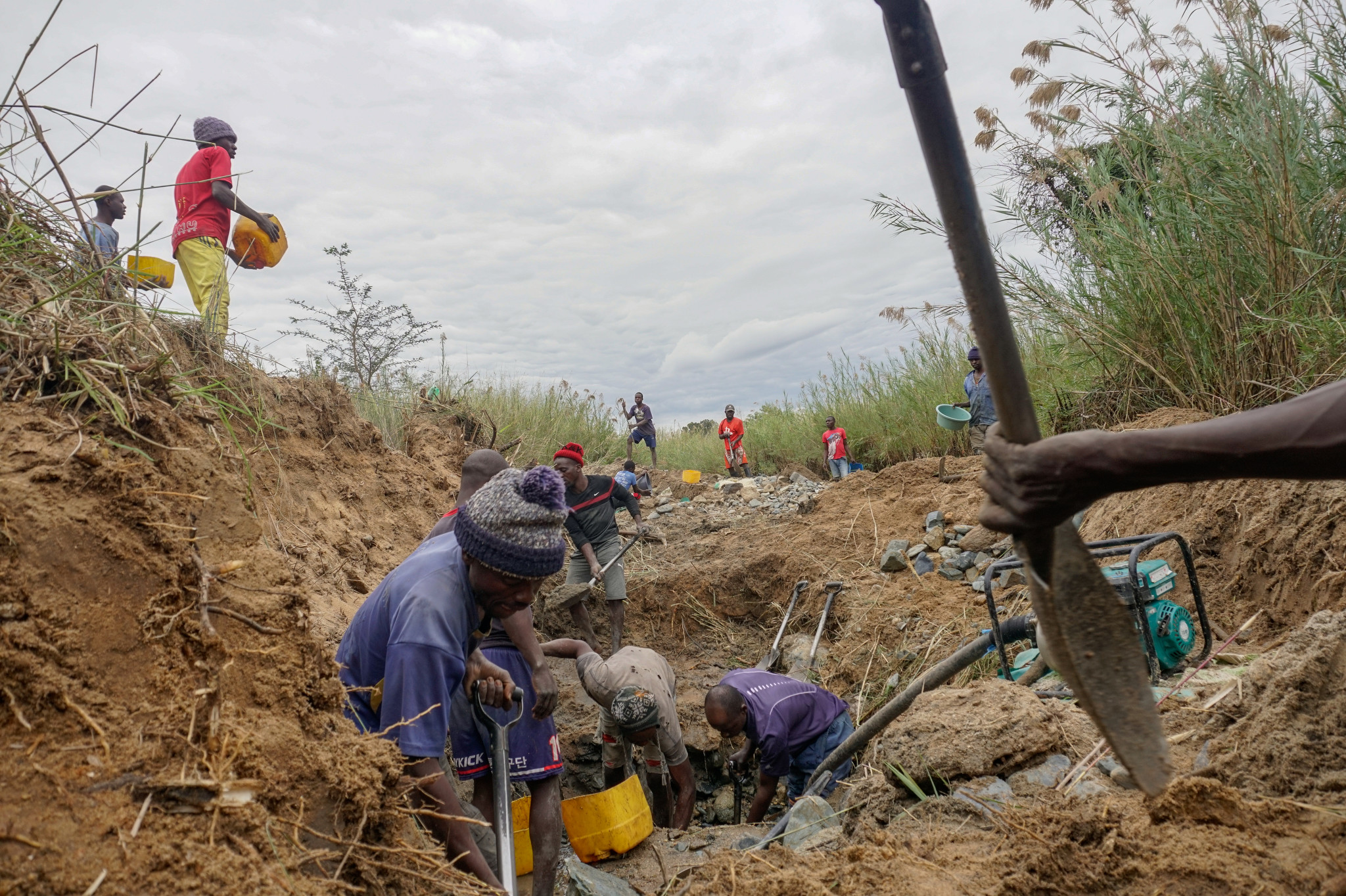 Linda Mujuru, GPJ Zimbabwe A group of miners searches for gold along the Odzi River.

THOSE INVOLVED IN MUTARE’S MINING INDUSTRY say they haven’t seen any government effort to stop its use. “It does not make sense to ratify international conventions without change on the ground or even informing the miners of these dangers or giving them alternatives,” says Lloyd Sesemani, the director of Zivai Community Empowerment Trust, an organization focused on transparency in the mining sector.

Gold, as the country’s largest export, is vital to its economy. Zimbabwe sold $2.14 billion worth of gold in 2020, ranking it 35th among the world’s gold exporters. The main importers of Zimbabwe’s gold were the United Arab Emirates, Uganda, South Africa, Hong Kong and Ukraine.

Artisanal miners, often lone workers who mine illegally or without adequate machinery, are key to its success. They deliver more than 60% of the gold produced in the country, according to Zimbabwe’s 2022 national budget, up from 43% in 2016. 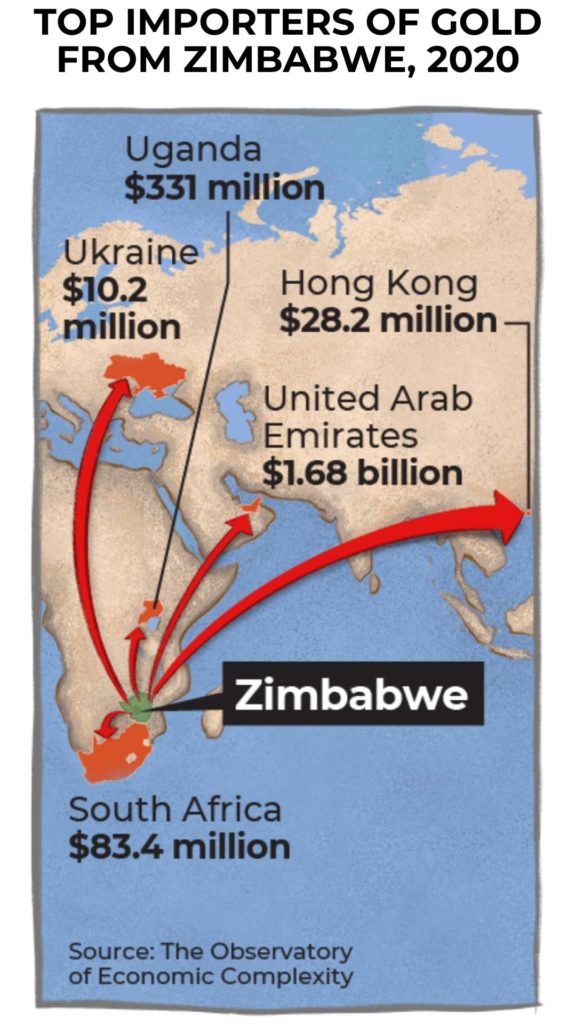 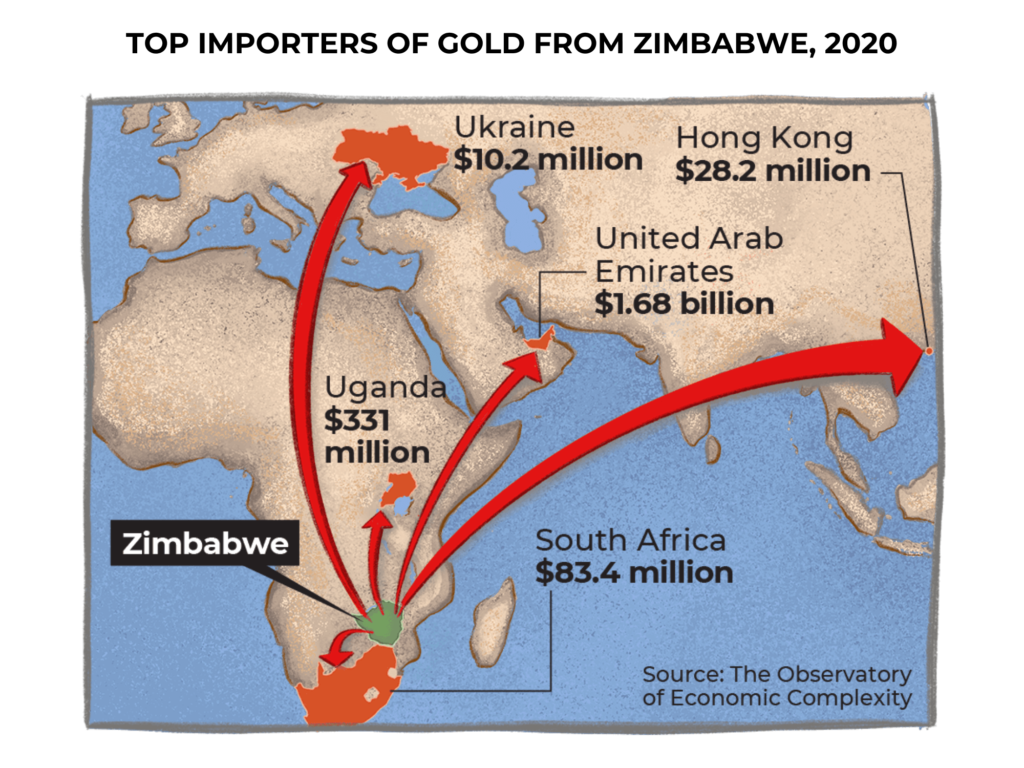 Peter Magaramombe, the general manager at Fidelity Gold Refinery, the government’s only official buyer of gold, insists a mining license is a prerequisite to sell gold to the agency. But Clemence Tembo, a gold-buying agent for the agency and gold miner, says he only needs to see a person’s identification to make a purchase. “We buy gold, no questions asked,” he says. Tembo’s statement matches transactions witnessed by Global Press Journal in Mutare. (Magaramombe didn’t respond to follow-up requests for comment.)

Nyakurima is among the unregistered artisanal miners who sell gold to a middleman. From what he mines, he’s able to take care of himself and his three siblings, whom he’s raising after his parents passed away. When he recently learned about the dangers that mercury presents, he decided to take his chances. He needs the income. 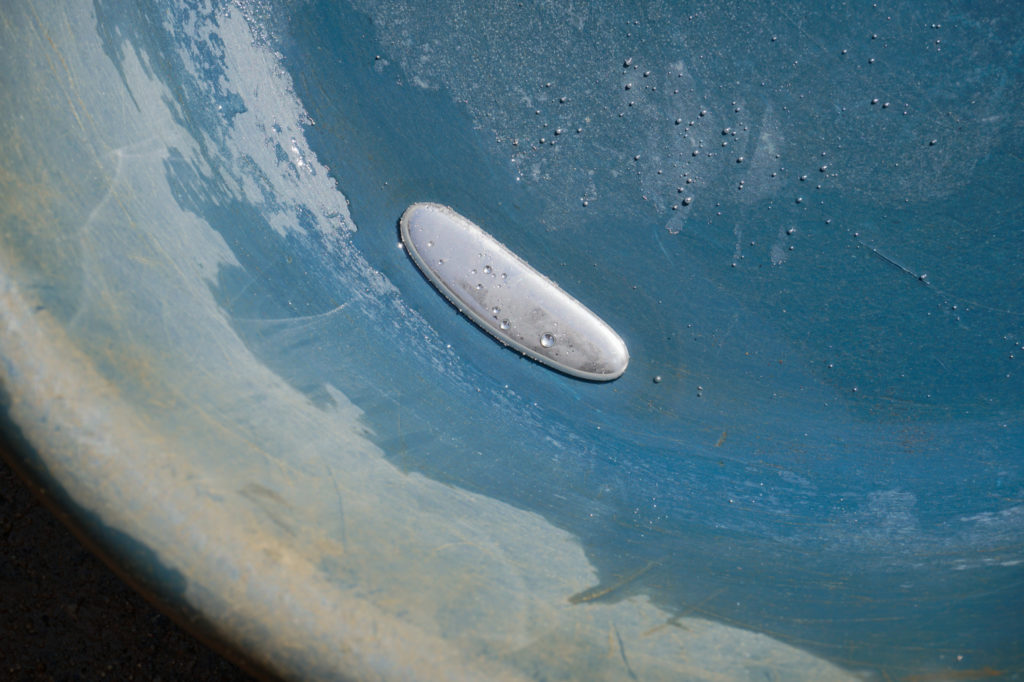 Linda Mujuru, GPJ Zimbabwe Zimbabwean officials say they are working to reduce the use of mercury in gold mining, which can have toxic effects on land, water and human health.

MERCURY COSTS ABOUT $120 PER KILOGRAM (2.2 pounds) — roughly the cost of 120 loaves of bread in Zimbabwe. Much of it is smuggled in through the country’s porous borders.

And for most miners, it’s easy to access. Nyakurima gets it from middlemen who buy his gold and then sell it for a profit to other bulk buyers or the government subsidiary. Their buying prices are usually low, but they go to the miners’ location and provide the mercury for free.

Other times, it’s even easier to find. Nyakurima and Mauta say they discover mercury in the same water used for drinking and bathing by the nearby community. Mauta says he often sees gold combined with mercury wash up on his plastic mat. “It’s already there in the water from upstream,” he says. “It’s all over in the water.”

A short walk from where Mauta, Nyakurima and a dozen other miners work, Cecelia Kambeni fetches water for drinking and bathing with her two grandchildren. The 65-year-old and her family moved to the region from the southern diamond fields of Chiadzwa, where they’d also worked in the mines. “We don’t know about mercury use in mining or any dangers,” she says. “This is the only source of water that we have.”

That worries experts because mercury is most commonly consumed by eating fish, says Dr. Josephat Chiripanyanga, who has experience treating patients with mercury poisoning. But just as concerning, he says, is that “most of our people being affected by mercury [are] because of illegal things like gold panning.”

Global Press Journal reviewed data from water samples collected earlier this year by the local district council from Lake Alexander, which feeds into the Odzi and Mutare rivers. The samples revealed that mercury levels were nearly 150 times above the World Health Organization’s drinking water guidelines.

Tembo, the gold-buying agent who also mines, knows the toll mercury can take. The 37-year-old was sick for more than a year and diagnosed with mercury poisoning. “At times l would wake up with a rash, tasteless mouth, slowness in speaking and loss of memory,” he says. He couldn’t get answers in Zimbabwe due to its deteriorating health care system, so he had his blood tests sent to South Africa. They revealed the presence of the toxic chemical. “The doctor told me that I was very lucky to have survived this,” he says.

How Mercury exposure Affects the body

Using mercury to mine gold involves two types of mercury: elemental mercury, the liquid metal, and methylmercury, the mercury found in seafood.

Elemental mercury is dangerous when inhaled or touched. Artisanal miners handle this metallic liquid when they use it to collect small pieces of gold. Then, they burn the mercury to separate it from the gold. The burning creates an odorless, colorless and toxic vapor.

The potent neurotoxin seeps into the blood, the brain and for pregnant women, the placenta and breast milk. It affects the nervous, digestive and immune systems. Serious exposure can cause tremors, nausea, memory loss, kidney failure, respiratory failure and death.

Methylmercury is found in the environment. When miners rinse their mercury-tainted supplies in the river, the elemental mercury merges with microorganisms in the soil and water and becomes methylmercury, a toxic compound that accumulates in fish and shellfish.

This is particularly hazardous to children and fetuses. When a child or a pregnant woman eats fish tainted with high levels of methylmercury, it damages the growing brain and nervous system. Repeated exposure can cause cerebral palsy and impair memory, cognitive thinking, language and motor skills.

SOME MINING COUNTRIES HAVE MADE PROGRESS on eliminating the chemical’s use. A Clean Tech Mine site in Mozambique has used a magnet to separate gold from fragments. In Burkina Faso and Senegal, a Canadian nonprofit known as the Artisanal Gold Council worked with small-scale miners to pay back the cost of new mercury-free equipment and training through gold found using these new methods. And in Ghana, Solidaridad Network, a nonprofit focused on small-scale farmers and miners, says efforts to end mercury use have centered on public health campaigns.

The few Zimbabwean miners who do know about mercury’s effects want officials to move more quickly to find alternatives. The government “should be at the forefront to eradicate the use of mercury; so far they are not,” says Lovemore Kasha, an advisor at Manicaland Miners Association, an association of small-scale and aspiring miners in Mutare. He uses mercury, he says, because he doesn’t have any other alternatives. 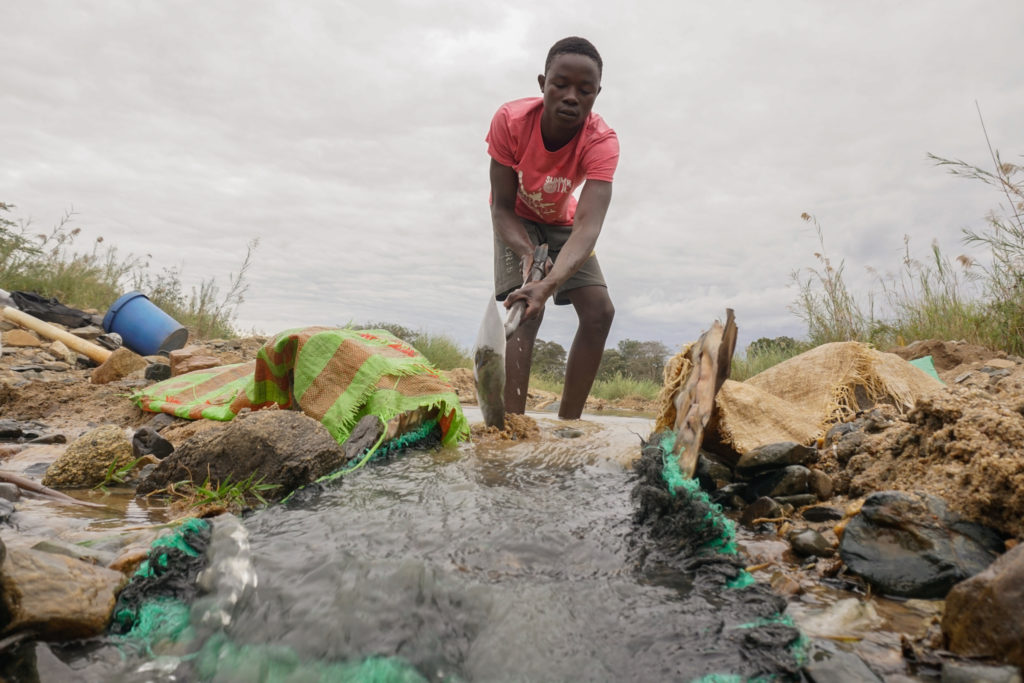 Miners on the Odzi River agree. Mauta finishes his day in the cool water by separating mercury from gold. He kneels on the banks of the river and burns the intertwined substances. The smoke floats up and he’s left with a piece of gold worth between $8 and $10. He’ll split that with Nyakurima.

“Mercury allows us to catch the money,” Mauta says with a grin as he inhales the fumes.