A powerful sect facing allegations of abuse is also under scrutiny for its close political ties, including to the country’s president – whose signature is needed to make a ban on child marriage a legal reality.

HARARE, ZIMBABWE — When Anna Machaya died while giving birth at the shrine of one of Zimbabwe’s most secretive religious sects, there was outcry across the country.

Anna was only a child, having turned 15 years old a mere 10 days before her July 15, 2021 death. She was carrying the baby of Hatirarami Momberume, her 26-year-old husband. It’s unclear when they married, but it was with the consent of her parents, who belong to the Johane Marange Apostolic Church, a conservative religious sect that has been accused of marrying underage girls to older men. When their daughter died, the parents tried to cover it up, police say.

“The parents openly lied to the police,” says a report posted on the website of Zimbabwe Republic Police.

Paul Nyathi, a police spokesperson, says the parents attempted to hide their daughter’s true age by presenting investigators with identification documents of her 22-year-old cousin.

Anna’s death has renewed calls for the Zimbabwean government to crack down on religious sects like Marange, which critics accuse of institutionalizing sexual abuse and marriage of girls to older men. Child marriages are endemic in the country, with 33% of women and 4% of men age 20-49 reporting that they were married before reaching the adult age of 18, according to a 2019 survey by Zimbabwe National Statistics Agency. But critics say adults who arrange child marriages rarely get prosecuted because sects like Marange have a lot of political power. 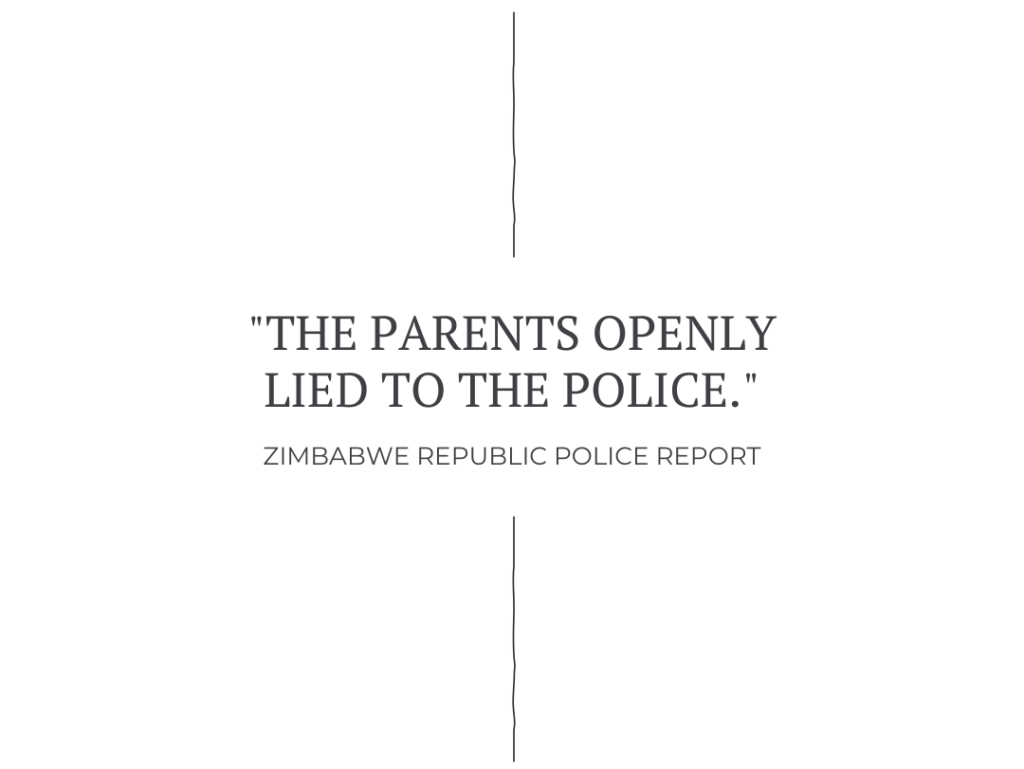 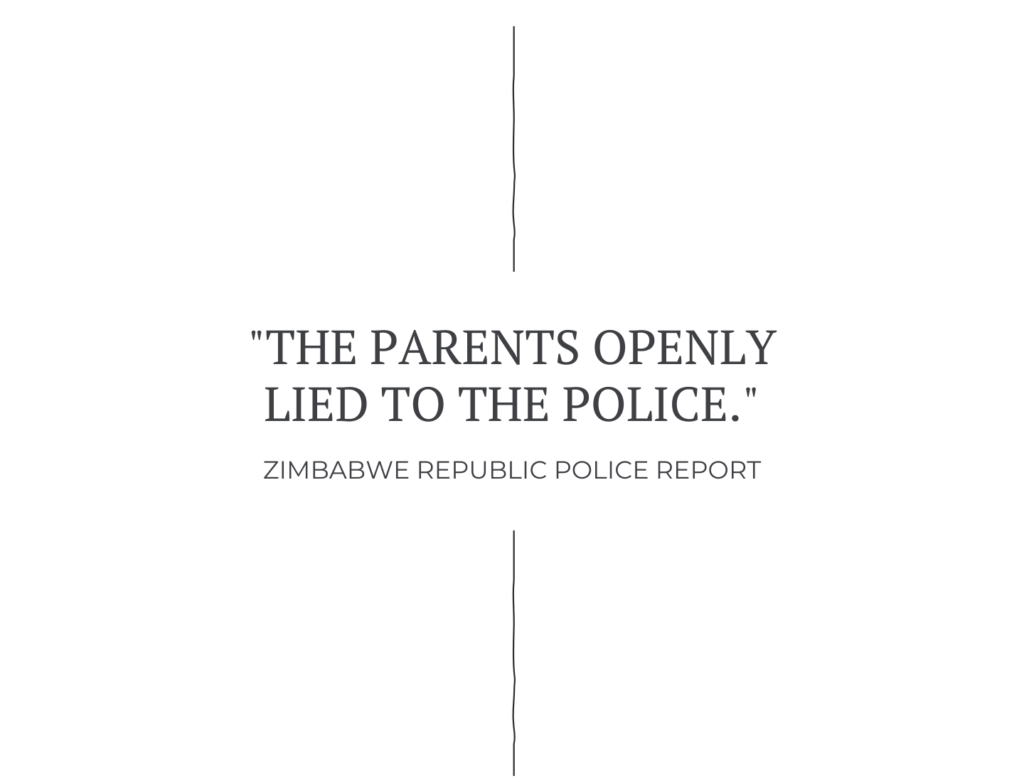 Aaron Nhepera, the permanent secretary in the Ministry of Home Affairs and Cultural Heritage, denies that the government ignores suspected crimes of churches like Marange.

“We haven’t turned a blind eye,” Nhepera says. “Any issue that is brought to our attention is investigated without bias.”

In a written statement, Nyathi, the police spokesman, says police do not have data on cases of child marriage because the current law does not prohibit it. But he says police do prosecute offenders under laws forbidding sex with minors. Between 2018 and 2021, police handled more than 10,100 cases of people accused of having sexual intercourse with children, he says.

Zimbabwe’s National Assembly recently passed a bill that could formally ban child marriages and allow police to properly prosecute offenders. It’s pending President Emmerson Mnangagwa’s signature. But children’s rights advocates say that even if the bill becomes law, they doubt it would make a difference because child marriage is a societal problem, which is why it’s prevalent in sects like Marange. 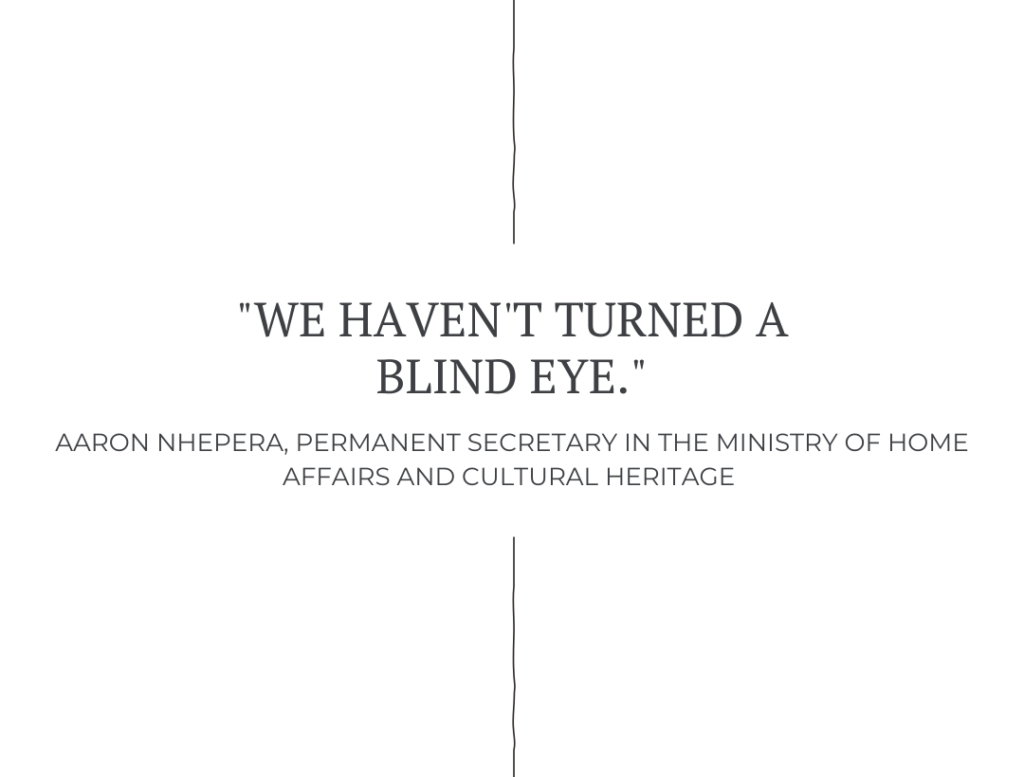 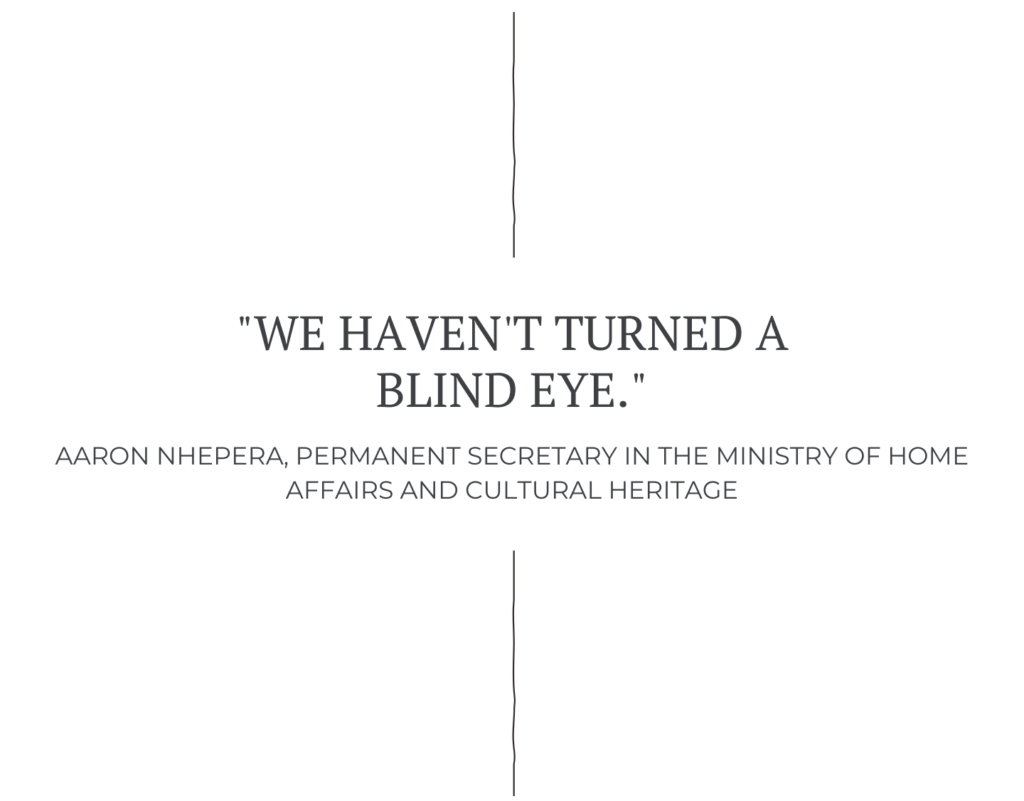 Dr. Sharon Hofisi, a human rights lawyer, says that while the proposed law clearly forbids child marriages, it won’t be effective without proactive campaigns by the government, the media and independent institutions to change society’s attitudes toward the practice.

“Sex with children under the legal age of [consent at] 16 seems rampant, but enforcement of laws has been reactive, especially when dealing with the Marange sect, which uses religion to justify sex with underage persons,” Hofisi says.

Johane Marange founded the eponymous church in 1932. What was initially a small sect made up mostly of his extended family became popular among Zimbabweans because it blended the teachings of Christianity with traditional beliefs like polygamy, which existed before European colonization. With more than 1.2 million followers, it’s one of the largest apostolic churches in Zimbabwe, which gives it significant political power.

Kudzai Biri, a Zimbabwean-born professor at the University of Bamberg in Germany, says the close relationship between politics and religion has made it difficult to fight child marriages. Politicians protect sects like Marange in order to secure votes, she says, a practice former President Robert Mugabe normalized and that has continued under the current president. “They sacrifice social justice for political gain,” Biri says. 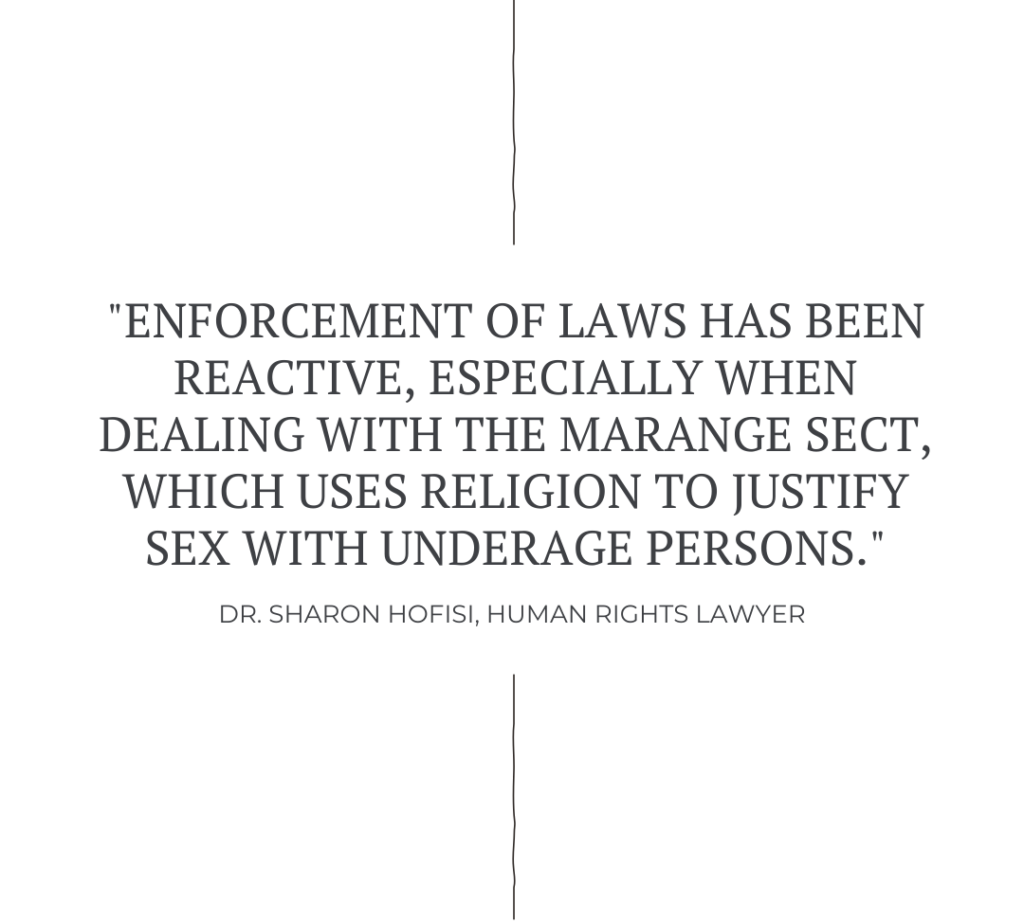 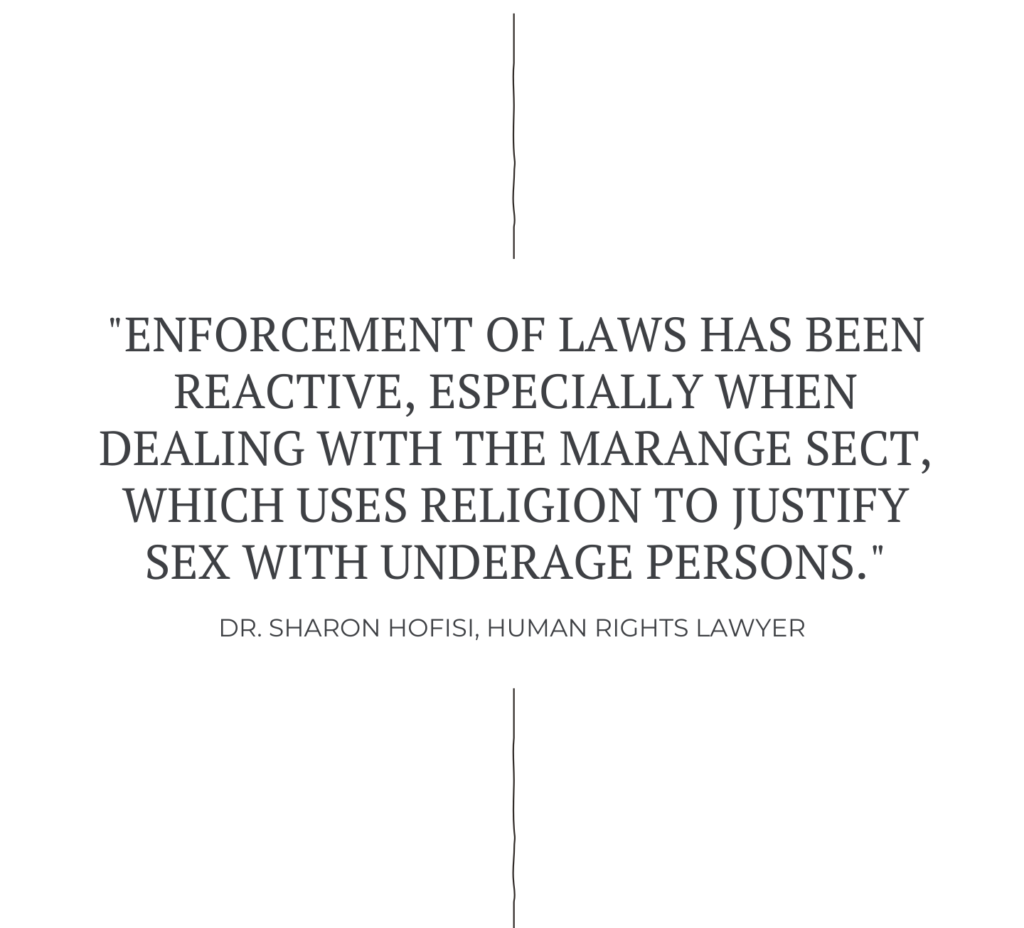 The political connections of the Marange sect go all the way to the highest level of government. Both Mugabe and Mnangagwa had addressed congregations of Marange worshipers at the invitation of High Priest Noah Taguta, the sect’s leader. When Taguta died on April 17 at age 82, Mnangagwa said the government would cover some of the funeral expenses. The president also sent a delegation of ministers to deliver his message of condolences in which he described Taguta as a leader who “enlightened the life of the girl-child in the church.”

Abraham Mafararikwa, one of Marange’s top leaders, denies that the church tries to influence politicians in order to get protection from the government. “Our church isn’t involved in politics because politics is a dirty game,” he says.

Mafararikwa acknowledges that Anna was a member of his church, but he denies that Marange condones child marriages. The church automatically expels those who marry minors, he says. “Those are all rumors from people who want to tarnish the image of our church.” 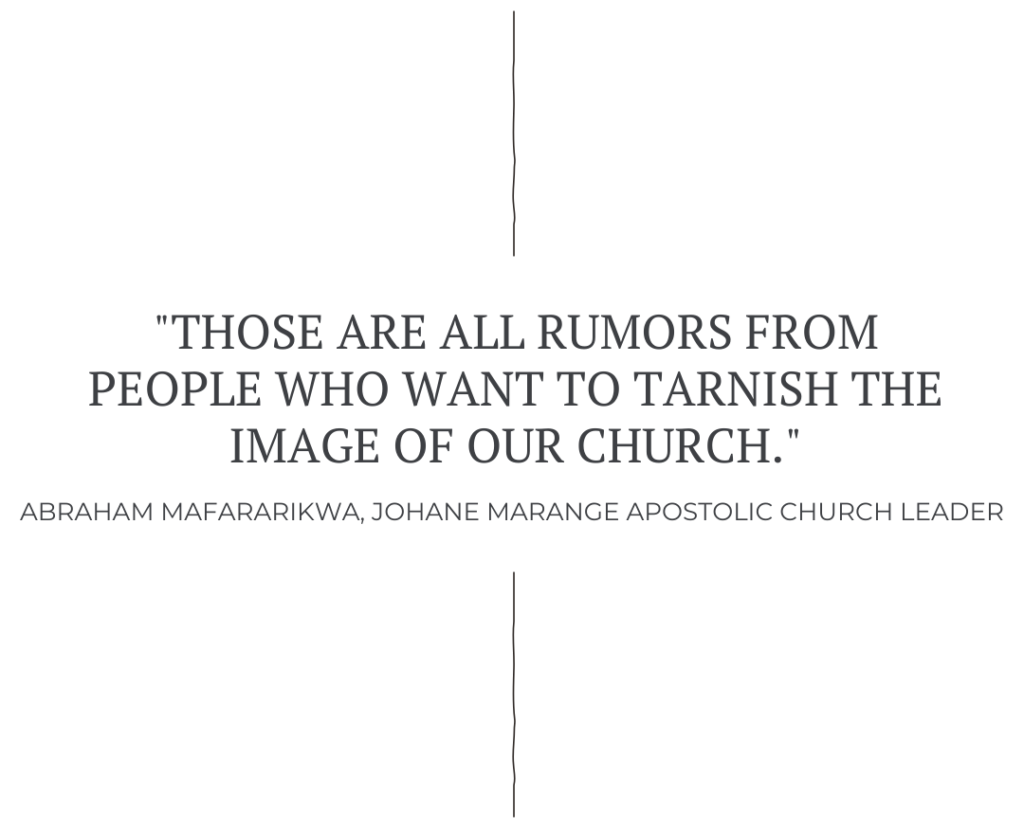 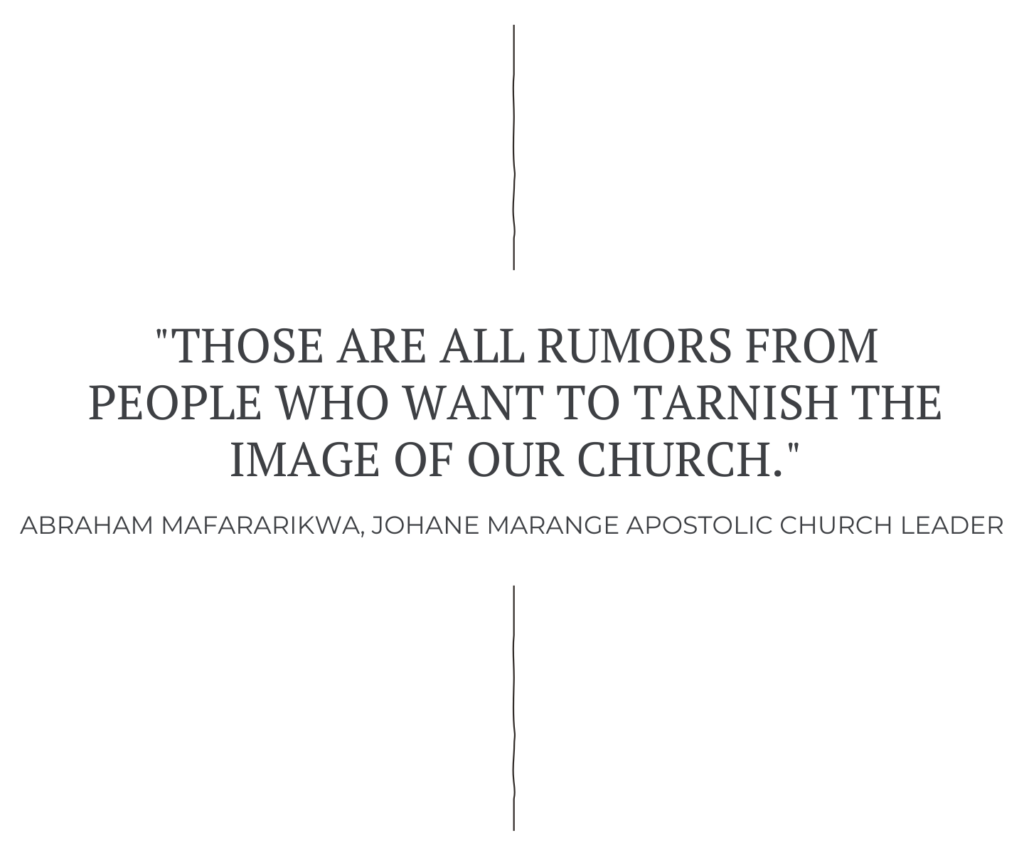 But interviews with some of the church’s followers contradict him. Mary, who declined to give her last name for fear of repercussions, says she was born and raised in the church, and staunchly believes in its teachings. Mary, 37, says when she was 15, her parents married her to a 27-year-old at the church. She says that child marriages still happen in the church, and she defends the practice.

“People condemn our church for marrying off young children, but children as young as fifth-graders are out there engaging in sex,” she says. “A minor who has gone to a husband to have sex is better than one who is doing it outside marriage.”

Unlike Mary, Patricia Moyo says she and her family decided to leave the Marange church after decades of faith. Moyo was born into the church, got married and had nine children, none of whom were vaccinated. Within eight years, four of the children, between ages 1 and 7, died because Marange members are forbidden to seek medical care at hospitals, she says.

“Losing a child is the most painful thing a mother could ever experience,” Moyo says. 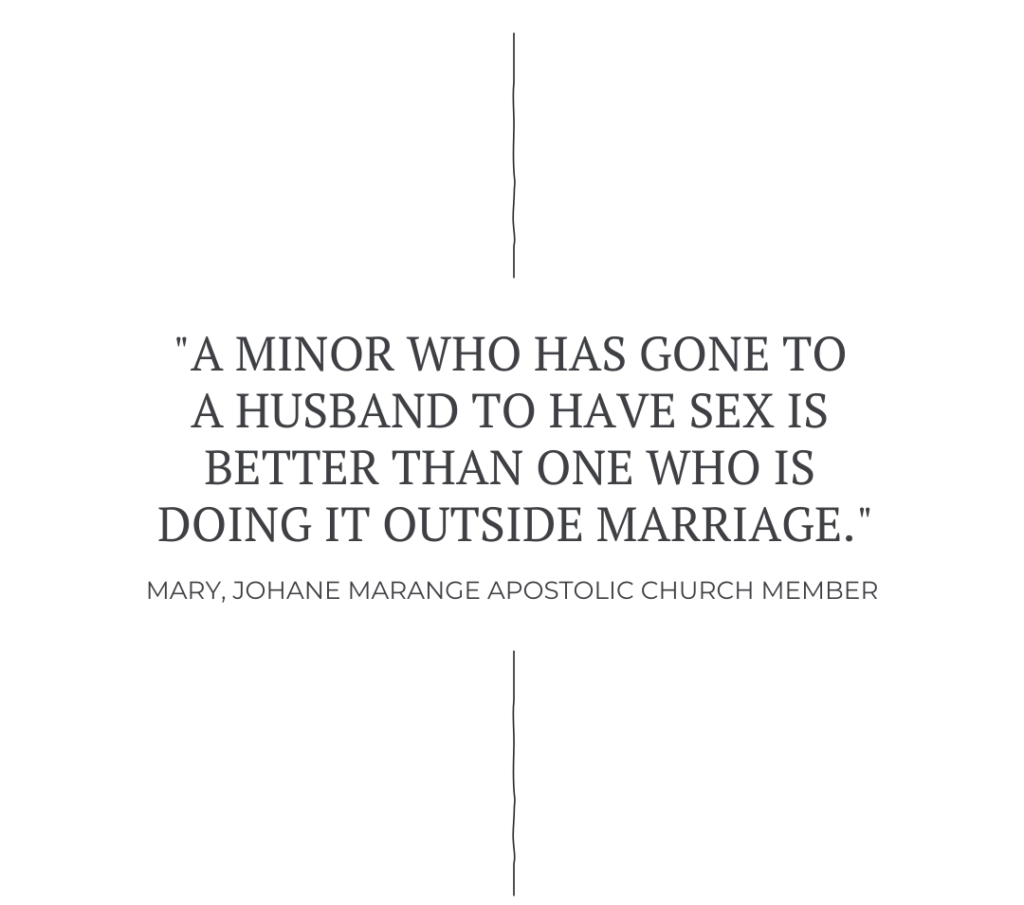 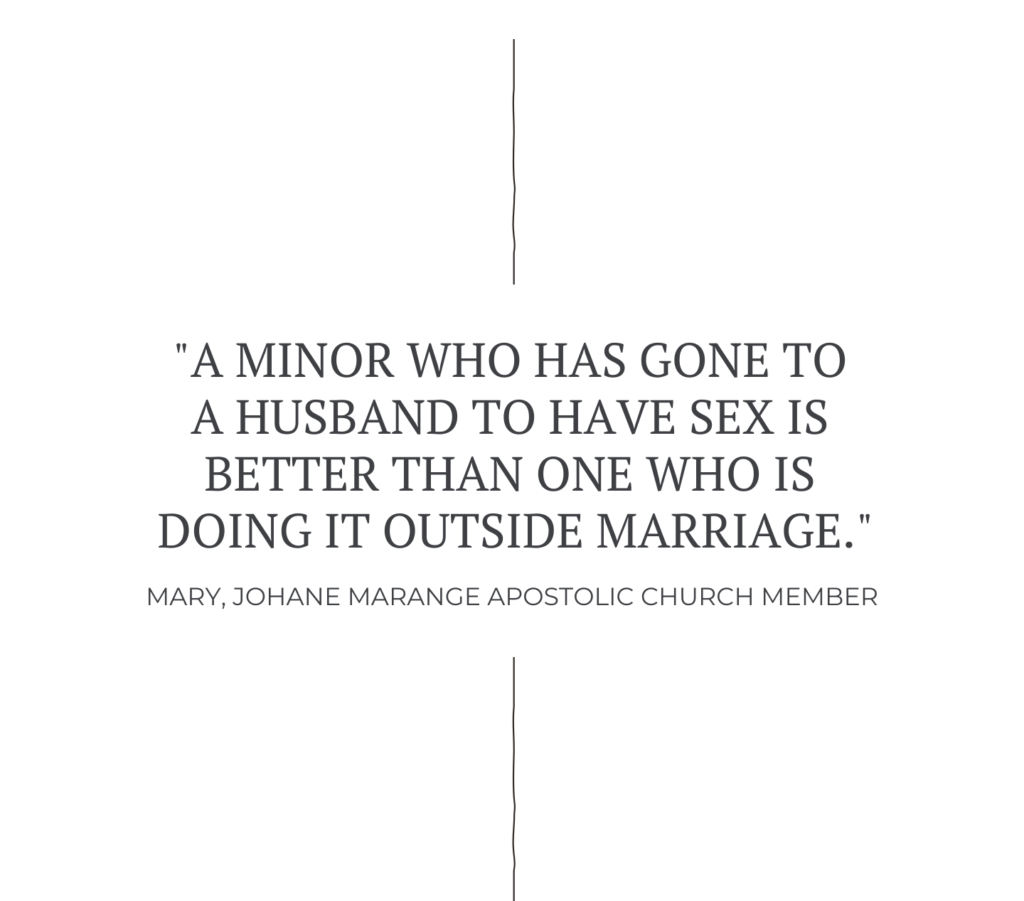 When her remaining five children contracted measles in 2020, Moyo defied the church and immediately took them to a nearby hospital. After they recovered, she decided to walk away from the church she had known all her life. She says the decision not to take her four other children to the hospital before they died still haunts her.

“It was my duty to protect my children,” she says, fighting back tears. “l failed them, and l regret the choices l made.”

Although Nhepera, the permanent secretary, says the government investigates every case thoroughly, critics find it hard to believe that there has been justice for Anna. Her parents were charged but only got fined for trying to deceive investigators. Momberume, her husband, was arrested, charged and released on bail before he failed to show up for a scheduled court date in November, says Brian Majamanda, the lawyer who represented him. Neither the lawyer nor the police know his whereabouts.