BUSIA, UGANDA — From here, the Kenyan border is tantalizingly close. Just a five-minute walk along a reddish dirt road, past low-slung homes and general stores; mango trees and maize gardens; grunting motorbikes and whining wheelbarrows, and women teetering baskets of melons on their heads. Many mornings, just after sunrise, Middy Amule is among the few dozen women who hustle down the path to sell dresses, cereal, tea, coffee, tobacco, salt and bananas in Kenya and return home to Uganda by dark.

The dirt routes are known in Swahili as panya, or informal, routes. They allow Amule, 53, to skip the official border checkpoint, with its long lines and mandatory fees that would eat into her already-slim profits. But authorities consider taking the panya routes as akin to smuggling, a designation that, in practice, puts the women at risk of exploitation.

Officials station themselves along the well-trod paths, traders say, demanding bribes, stealing food — or worse. “A woman once came to me to empty her grief,” Amule says. The woman told her, “‘I feel filthy. I have been used by the security man at the checkpoint.’” But the woman didn’t report it — word might drift back to her husband. “How can you tell your husband?” says another trader, Alice Sanyu, speaking generally about the pressures the women face. “Which husband would tolerate a raped woman?”

The women rarely seek help through official channels. Many never finished school and struggle with English, the language of government bureaucracy, says Oundo Godfrey Ongwabe, the regional chairperson of cross-border trade for the Common Market for Eastern and Southern Africa. Sometimes the authorities are the harassers. “A border official will request to help her with goods for a payback,” says Oundo, who like many Ugandans uses his family name first. “The moment this happens, it becomes routine, and she cannot tell the husband.”

A number of government agencies play a role in running the checkpoint. Irene Kiiza Onyango, a spokesperson for the Ministry of Trade, Industry and Cooperatives, says, “We react on matters that are officially reported, but not speculations, and the women have never approached our offices to talk about what they go through.” A spokesperson for the Uganda Peoples’ Defence Forces, which helps patrol the checkpoint, says the military has also received no complaints.

Ibrahim Kibuuka Bbossa, a spokesperson for the Uganda Revenue Authority, which oversees customs agents, says the traders should speak up. “We deal with abuse of integrity so highly, and we fire people whom we find guilty of disrespecting our code of integrity. So the women should report these cases.” But that’s not easy. Filing a complaint often requires evidence, and providing that could ruin a woman’s marriage or livelihood. 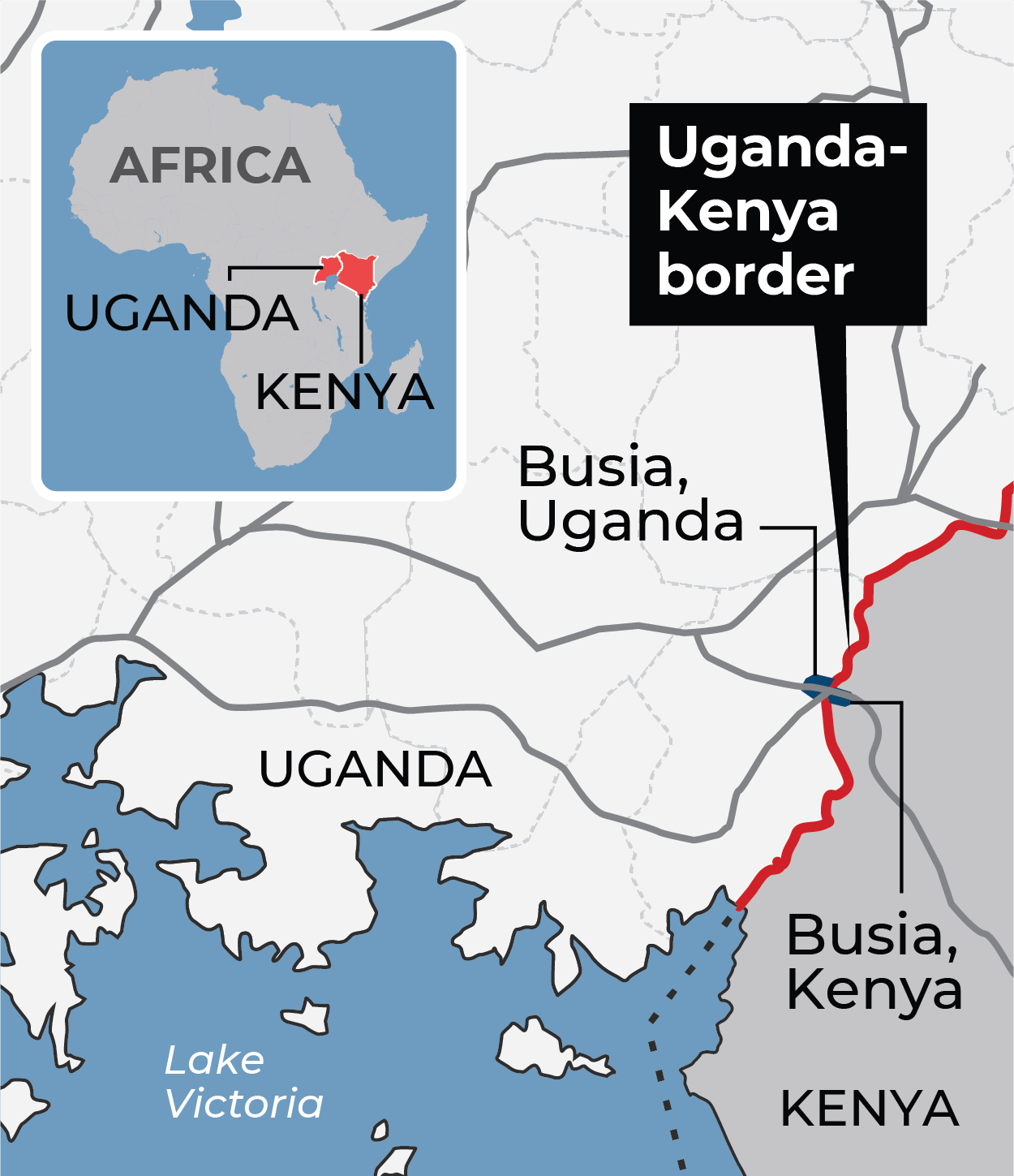 These woes are typical for small-scale traders, or traders whose transactions amount to less than $2,000 each. This type of commerce fuels a significant shadow economy of buyers, sellers, money-exchangers and drivers.

One estimate says small-scale trade provides income for almost half of Africans, according to a study in Development Policy Review, an academic journal affiliated with the Overseas Development Institute, a think tank based in London. In Uganda, Oundo says, small-scale exchanges make up 42% of all trade.

Most traders are women, and many are their family’s primary breadwinner. In Busia, they have little choice but to accept the risks. There are limited economic options in this slice of eastern Uganda, nearly 200 kilometers (124 miles) from Kampala, the capital. Few Ugandan women own land, making it hard for them to get bank loans and start businesses. If a woman doesn’t work as a trader, she is likely a homemaker or a subsistence farmer.

The traders’ frustrations begin at the checkpoint. Many wheel their merchandise to Kenya on a loaded cart, or gadi gadi, the easiest way to transport a heap of items. Technically, they could stand in line with the buses and trucks, but that’s not a practical option. Traders usually don’t pay border taxes on goods valued at less than $2,000; however, they are subject to other fees.

As one of the country’s busiest checkpoints, Busia resembles a parking lot for much of the day. Crossing the border with merchandise takes about 34% longer than the regional average, according to a report about women traders in the Busia region produced primarily by graduate students at Columbia University in New York. For women, the checkpoint is an unpleasant place to wait; there are few washrooms and no child care facilities. While truck drivers nap in the hourslong queues as officials scan passports and paperwork, the women don’t have that luxury — time in line is time they’re not making money. 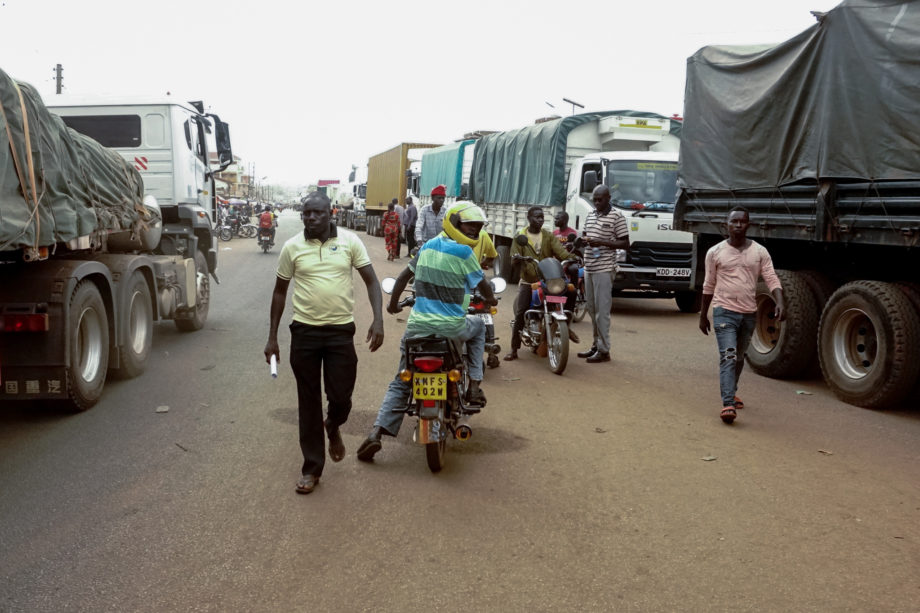 Commercial trucks wait for customs clearance at the Uganda-Kenya border in Busia, Uganda.

Suzan Nagudi, 33, has sold mangoes and melons in Kenya for more than a decade. Her husband once worked as a laborer in Qatar, but since he returned during the pandemic, he can’t find a job. The couple have three children — ages 2, 4 and 13 — and Nagudi’s income covers food, school fees, medical bills and rent. To her, the informal routes are the only viable routes. “I am thinking along the lines of getting to Kenya and sell my goods quickly and return before sunset,” she says. “But using the official route will derail my work.”

Along the panya routes, danger looms. Authorities, the women say, often bully them for kitu kidogo, or something small. Maybe a bribe, maybe a watermelon. Maybe more. A woman has little power to say no. Because she’s considered a smuggler, officials could seize her wares. “They want a sample,” says Sanyu, a trader who slips into Kenya twice a week. “They use the eye and the tongue to test the quality of the product.”

Most authorities are men, charging the interactions with gendered tension. In one study, 30% of women traders said they had been sexually harassed — and some of them raped — at border crossings, according to the Busia trade report. The women call one another if they spot a known predatory official lurking, often to no avail. Authorities on both sides of the border recognize and stop them.

Sanyu, 29, often travels hours to source melons to peddle in Kenya. She could make as much as 300,000 Ugandan shillings ($80) a week, she says, but because she pays kitu kidogo so frequently, she feels lucky to bring home half that. 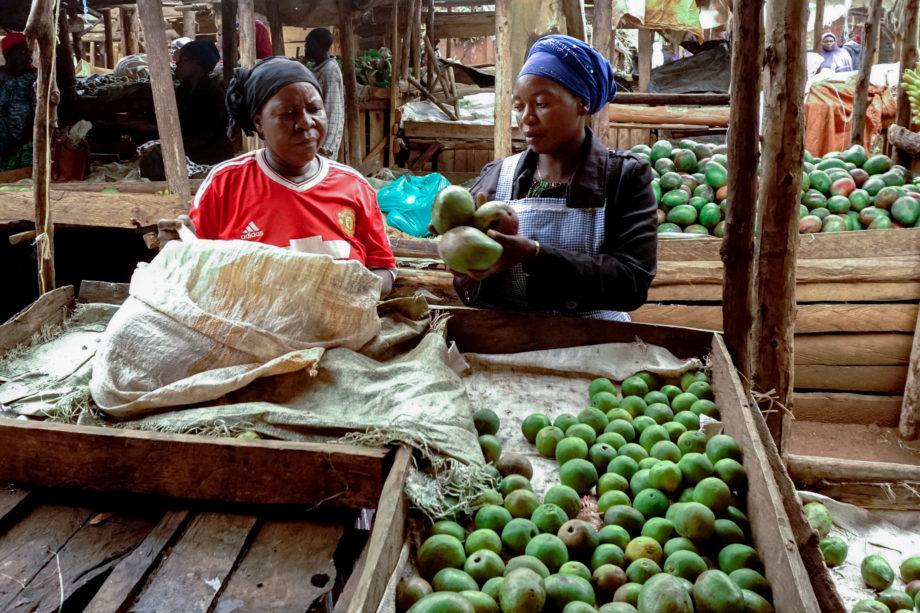 Suzan Nagudi, right, a small-scale trader, attends to a customer at her mango stand in Busia, Uganda.

Washington Ndeda, a trade information desk officer in Busia, blames the bribe demands, in part, on how poorly paid some border officials are. For instance, he helps traders navigate checkpoint rules, but he doesn’t earn a salary — only an occasional allowance. Amule is also a trade information desk officer, but she doesn’t make enough to stop trading.

Officials often blame superiors who demand a portion of the bribes, the Busia trade report says. “Once a guard told me that I must understand him because he also had to share with his boss,” Sanyu says. “That statement hurt me so much, seeing that I travel all the way from Pallisa looking for melons, get here and share with people that receive a government salary.” But Sanyu complied. She always does. “We are illegal traders. If we report, we would be arrested.”

Onyango, the trade ministry spokesperson, says, “The women are just not yet sensitized enough. They do not know their rights yet, so they duck off.” Women traders have formed associations to share information about border rules and dangers, although that doesn’t fix the central problem of corruption. The Busia trade report says authorities need to create a system where the women feel safe lodging complaints and confident that violators will face consequences. However, the report says, that would take “significant institutional reform and political will.”

Meanwhile, the panya routes beckon. Sometimes Sanyu’s husband tells her not to go back; it’s just too perilous. But, Sanyu says, “we have to survive — and the children.” When morning dawns, she loads her gadi gadi with melons, onions and eggs, and heads down a dirt path. 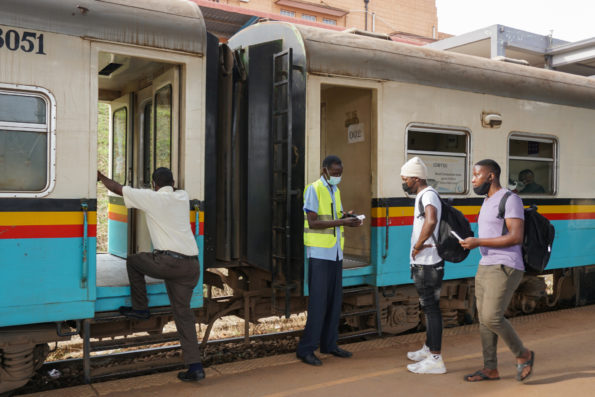