Skip to main content
The story you are reading was published on Friday July 15, 2016. To read more recent stories click here. 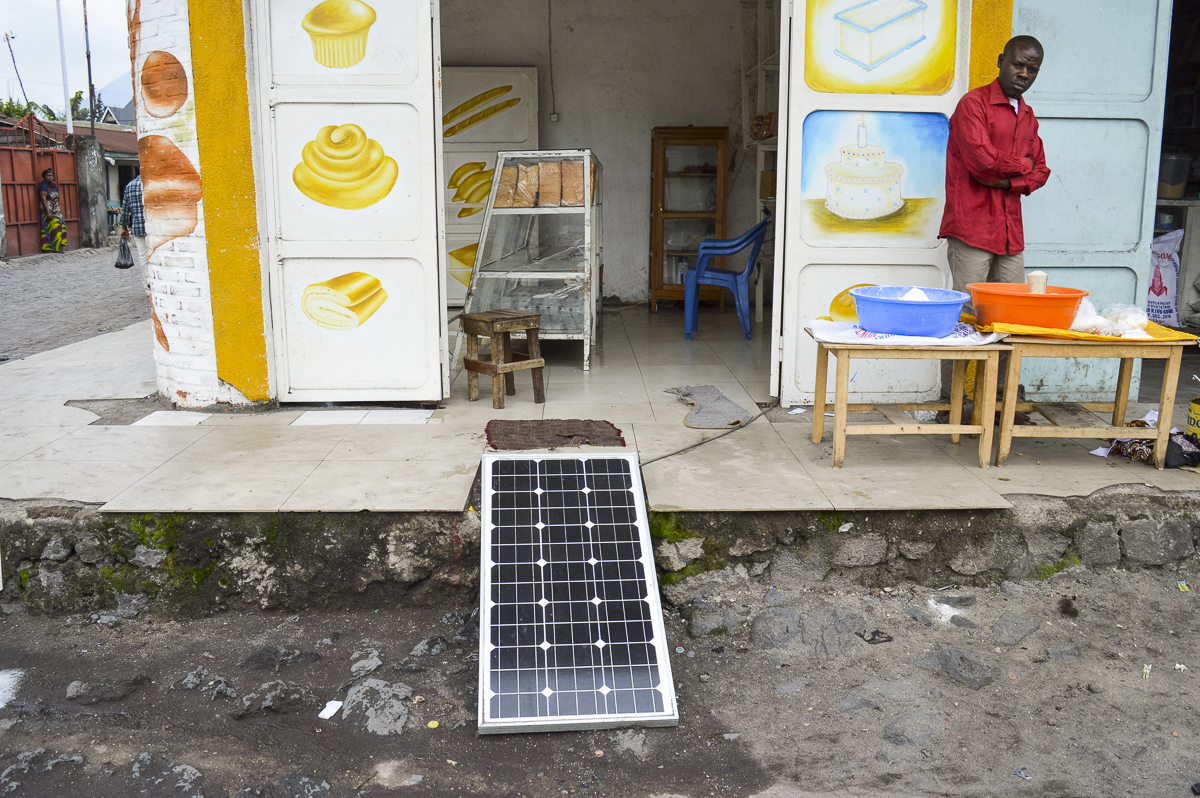 GOMA, DEMOCRATIC REPUBLIC OF CONGO — It’s rare to hear vendors call out to sell fish, meat or vegetables after dark.

Throughout this city, insecurity keeps most people inside once the sun goes down.

But in Himbi, a middle-class neighborhood in Goma, the Alanine Market is alive after hours, thanks to new solar lights.

The neighborhood has been dubbed “Miami” for the newly established nightlife. At 7 p.m., the beauty salons that surround the market are filled with women getting their hair braided or straightened. On the other side of the market, a barber renowned for his know-how in men’s styles is busy too. On this night, five gentlemen wait their turn to get one of the best Congolese hairstyles. 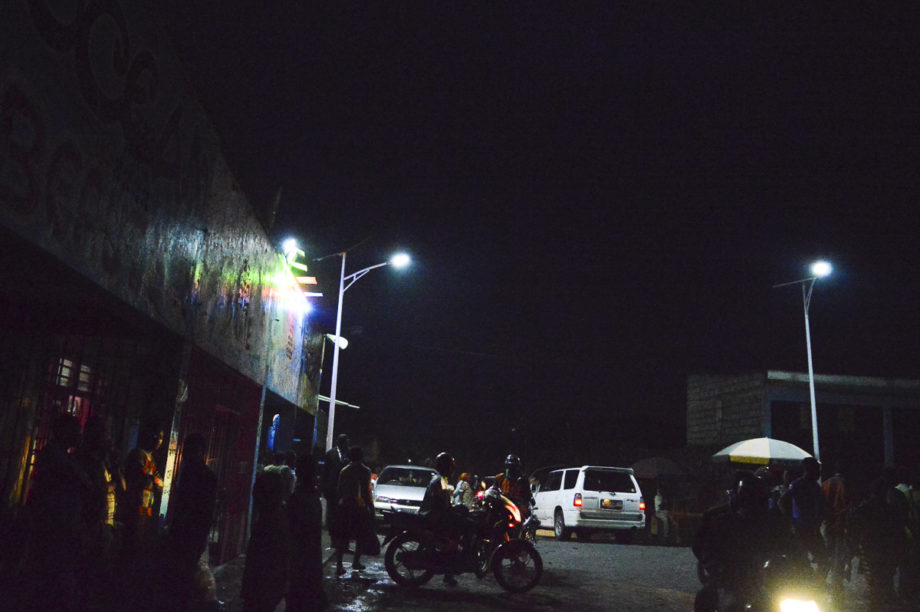 Goma’s Himbi neighborhood is now known as Miami for its nightlife, made possible by street lights.

Food shops have opened up, too. Stands sell cooked meat, French fries and beans. Kids play on the street, and people walk around without fear.

Safety in a Goma neighborhood is a major accomplishment. In this city, darkness has long been an indicator to get off the streets, where armed robbers walk freely and spread fear throughout the community.

Until recently, the middle-class Himbi neighborhood faced the same problems.

“No one could dare walk around here after 7 p.m.,” says Samuel Ndoole, who serves in the elected post of leader of Himbi neighborhood.

I received a heavy blow on my head and immediately lost consciousness. When I woke up, I was lying down on the ground with none of my belongings left. My wallet, my leather shoes, my watch and my laptop computer, all had been taken away. Asumani Tumaini, who lives in the Ndosho neighborhood of Goma and says he was robbed in April while walking home from a meeting in the evening

Ndoole says Himbi is now home to 52 solar panels, thanks to a project pioneered by the city’s former mayor in collaboration with a German organization whose name, translated into English, means Fund for Consolidation of Peace in DRC. The lights were installed in late 2015, and the project also brought some paved roads and benches to the area. The project’s total budget was $828, according to sources at the Fund for Consolidation of Peace in DRC. The organization is also behind the reconstruction of a markets in North Kivu and the development of rice-growing areas in South Kivu, among other projects.

“Residents can now move around until the late hours of the night without fear of being attacked,” he says.

According to the National Electricity Company (SNEL), just 15 percent of the country’s population has access to power, and most of that access is intermittent. In Goma, SNEL has just 7 megawatts of power available daily, but would need as many as 45 megawatts to provide electricity to most of the city, according to a SNEL employee who spoke on the condition of anonymity.

Even then, most homes wouldn’t benefit, because they’re not wired for electricity, and there is no proper electrical grid, the SNEL employee says. 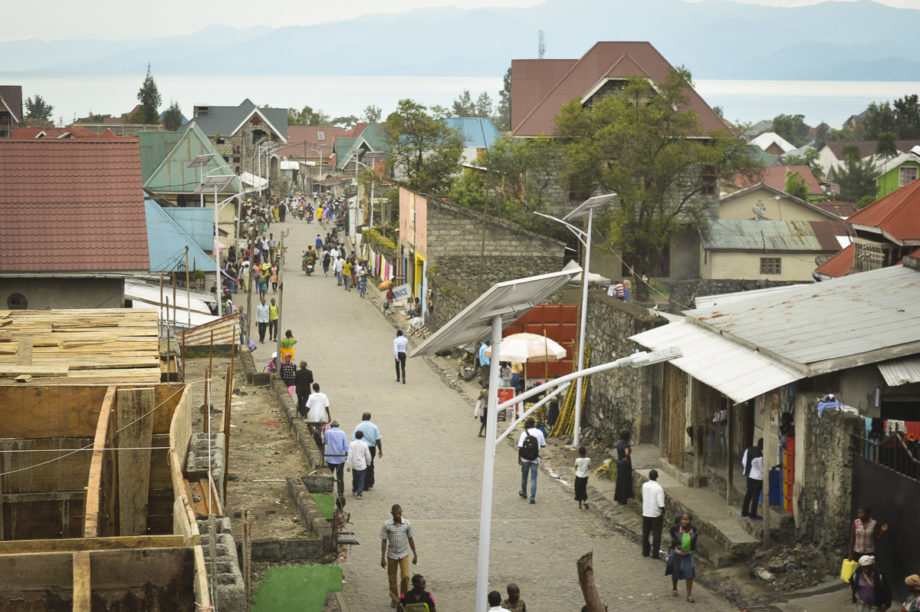 Like many Goma neighborhoods, Himbi once closed down at nightfall, when the risk of being robbed or assaulted pushed people indoors. That changed after the installation of solar panels, which power street lights.

Fear of walking the streets after dark is not without merit.

Asumani Tumaini, who lives in the Ndosho neighborhood of Goma, was robbed in April while walking home from a meeting in the evening.

“I received a heavy blow on my head and immediately lost consciousness,” he says. “When I woke up, I was lying down on the ground with none of my belongings left. My wallet, my leather shoes, my watch and my laptop computer, all had been taken away.”

At dusk, Jasmin Rehema, a resident of the Keshero neighborhood, was walking home from visiting a friend in the hospital when she was attacked by robbers who nearly tore off her ears trying to grab her gold earrings.

“No sooner had I arrived in my neighborhood than I heard footsteps behind me,” she says. “I was immediately full of fear and I sped up my steps.”

But she says they kept getting closer.

“So I started to run, but unfortunately I stumbled over a stone as I was running in the darkness. So, they caught me,” she says.

The thieves took her purse, which contained $150 that she had earned at her shop. Then, as they were ready to leave her lying on the street, one man noticed her earrings, she says.

“They bluntly grabbed them from my ears which they nearly pulled out of my head,” she says.

These kinds of attacks used to be common in Himbi too, Ndoole says, but crime rates are going down.

He says there have been “about 10” crimes reported since the lights were installed.

“Since the installation of solar public lights, I feel secure; even I manage to sell my goods at the time wanted without fear of harassment or banditry,” says Juvenal Zirirane, a shopkeeper in Himbi.

Other shopkeepers agree that business is booming in Himbi.

Aziza Masika, 36, says she faces constant challenges due to lack of power at her pub in the Katindo neighborhood.

“When customers order cold drinks, I fail to meet their need because I can’t dare to plug my fridge on the generator. I can’t afford fuel price,” she says.

In Himbi, it’s a different story.

“Now I can earn up to $50 a day, while before the installation of public solar panels I would hardly get $20 a day,” he says. “I feed my family thanks to this bar, and my children are studying at university.” 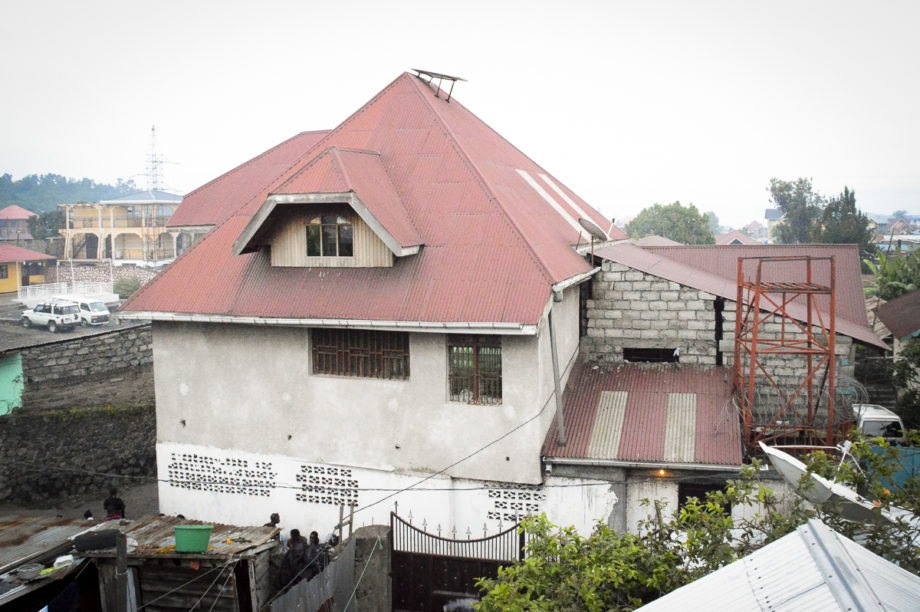 Goma’s Himbi neighborhood is an outlier in DRC, where just 15 percent of the population has electricity. Himbi residents and business owners say the solar panels have changed their lives by providing 24-hour electricity.

While people in Himbi thrive, discontent is growing throughout the rest of the city.

Adeline Mundele, 41, a mother of four, worked as a housemaid for a family in Les Volcans, an upper-middle-class Goma neighborhood that often has electricity.

“During the five years I spent in that house, electricity was always available 24 hours, seven days a week,” she says. “I sometimes wondered whether I lived in the city of Goma, because electricity seemed like [an] unachievable dream in my neighborhood of Majengo.”

Residents can now move around until the late hours of the night without fear of being attacked. Samuel Ndoole, the leader of Himbi neighborhood

A source from SNEL, who spoke on the condition of anonymity for fear of retribution, confirmed that wealthier neighborhoods that are home to government authorities, diplomats and international NGO staffers receive priority in the city’s sparse electricity supply.

“We give priority to areas inhabited by people with capacity to afford electricity bills,” the source says. “We are also under pressure from powerful people living in those posh areas. Thus, we are bound to provide them with electricity 24 hours a day for us to avoid trouble and risk losing our jobs.”

People in Himbi say their solar panels are more dependable than the city’s electrical supply.

“The solar energy panels always provide us with light compared to SNEL, whose promise is never kept,” says Espoire Makama, 25, a hairdresser in Himbi.

Now, shopkeepers from other neighborhoods are moving to Himbi to enjoy the light and business after dark.

“Before, I was a retailer in Majengo,” says Pierrot Murhula. “But since I was forced to close each day at 5 p.m. for fear of robbers, I decided to install my family and my shop here in Himbi. Here I can work till 8 p.m. without fear.”