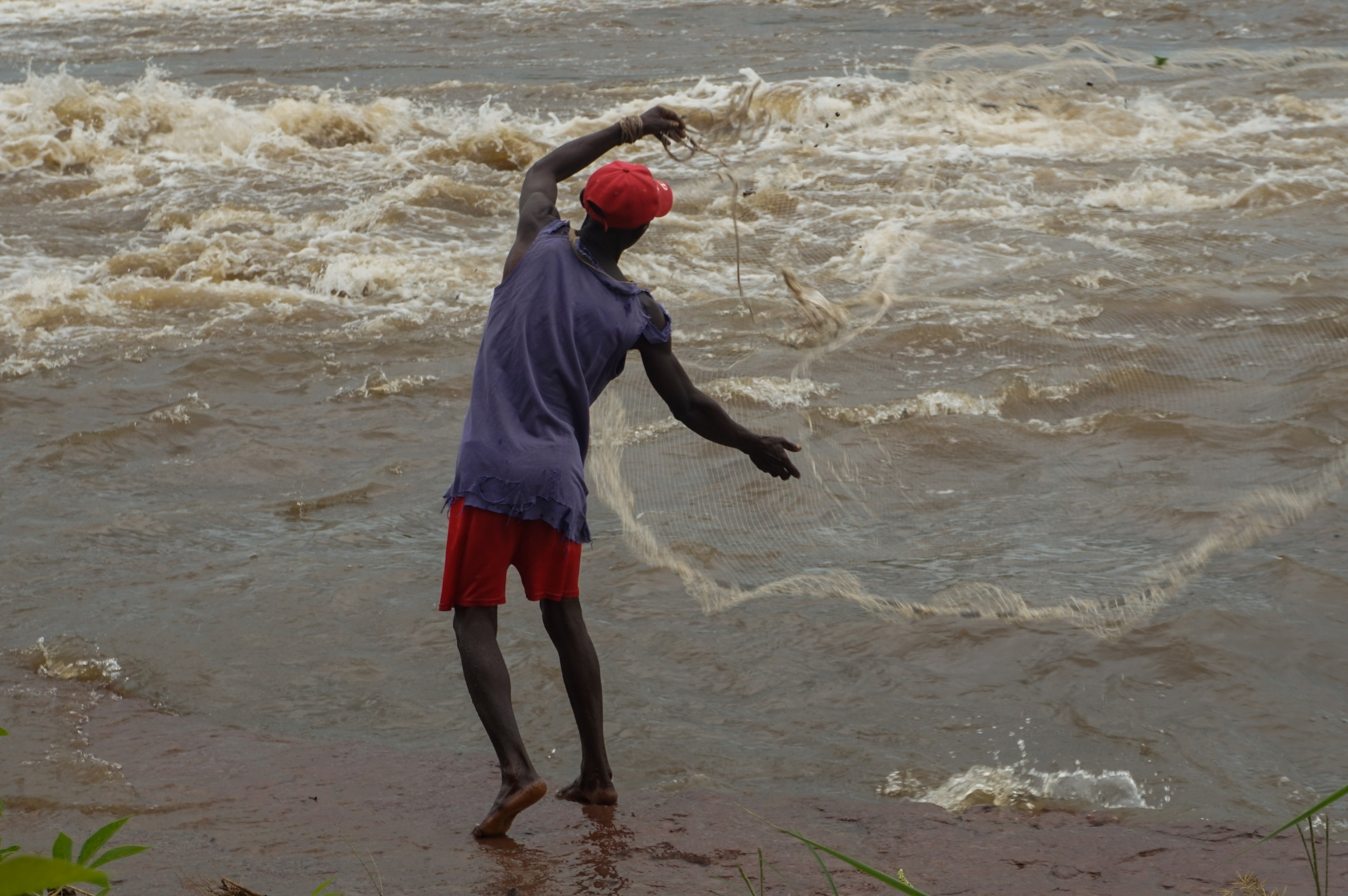 KISANGANI, DEMOCRATIC REPUBLIC OF CONGO — From the banks of the Congo River, Guy Inagosi plunges his net into the water and waits. Just a few meters from where he stands, water patters against rocks, then froths and bubbles at the bottom of Boyoma Falls, also known as Wagenia Falls.

When Inagosi finally pulls out his net, it’s empty. Again.

“I have tried all the different fishing methods I know since this morning but nothing!” says the father of eight, who has been fishing for more than 20 years. A resident of the Enya artisanal fishing community, after which Wagenia Falls takes its name, the fisherman remembers when he could catch 10 fish a day. Now, he’s lucky to catch one.

Artisanal fishermen from this community, who provide the city of Kisangani in northeastern DRC with fresh fish, complain of low yields in the Congo River. It not only threatens their source of income but deprives the local population of an important source of protein.

Experts and government officials fault the fishermen’s traditional practices, which they say are depleting the aquatic environment. Fishermen contend they must rely on methods known to them.

DRC boasts abundant fishing resources, given the rich freshwater ecosystem of the Congo River. The river has the largest discharge volume in Africa. Worldwide, it’s second to the Amazon in volume. It’s also home to some 400 species of fish, according to a report by the country’s Ministry of Environment and Sustainable Development. 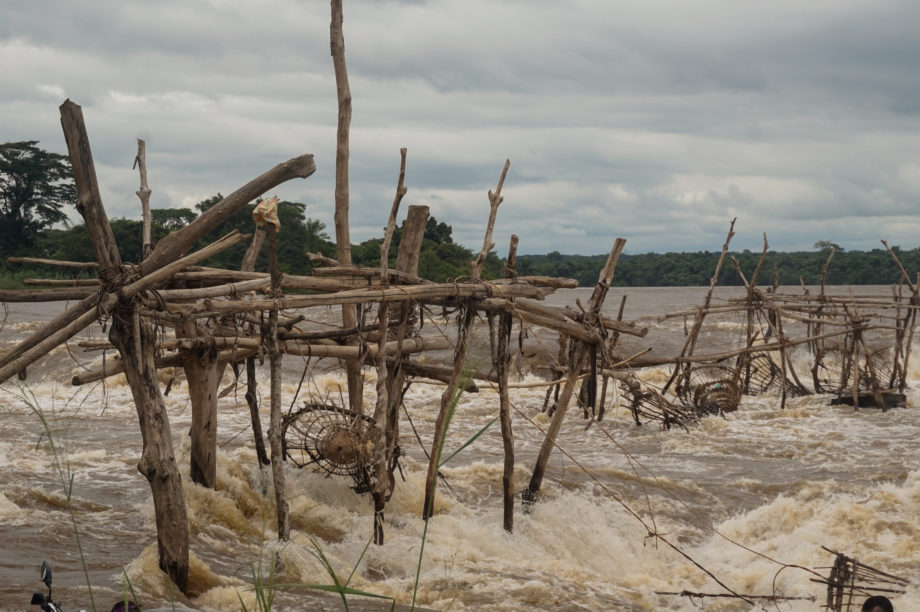 Wooden tripods anchor baskets in the river that are open to trap fish. It’s one of the fishing methods for which the Enya community is known.

This doesn’t make a significant contribution to the country’s gross domestic product, according to a 2014 report by the United Nations’ Food and Agriculture Organization, despite the country’s wealth of fishing resources, estimated at 700,000 tons a year. The report blames this partly on a lack of capital investment and proper policies.

Kakule Kizito, fish inspector in Tshopo province, where Kisangani is the capital, says that fishing policies do exist to maintain enough stock. The challenge, he says, is implementing them, as he lacks the funds to hire surveillance officers. “How can we control the situation and effectively monitor the industry if the state doesn’t provide us with the budget we need?”

Fishermen in Kisangani and neighboring areas use traditional methods to fish, which Kizito says is inadequate and degrades the aquatic environment. Some use mosquito nets, which catch recently hatched fish, interfering with the natural development and reproduction of fish, Kizito says, and should learn other methods. 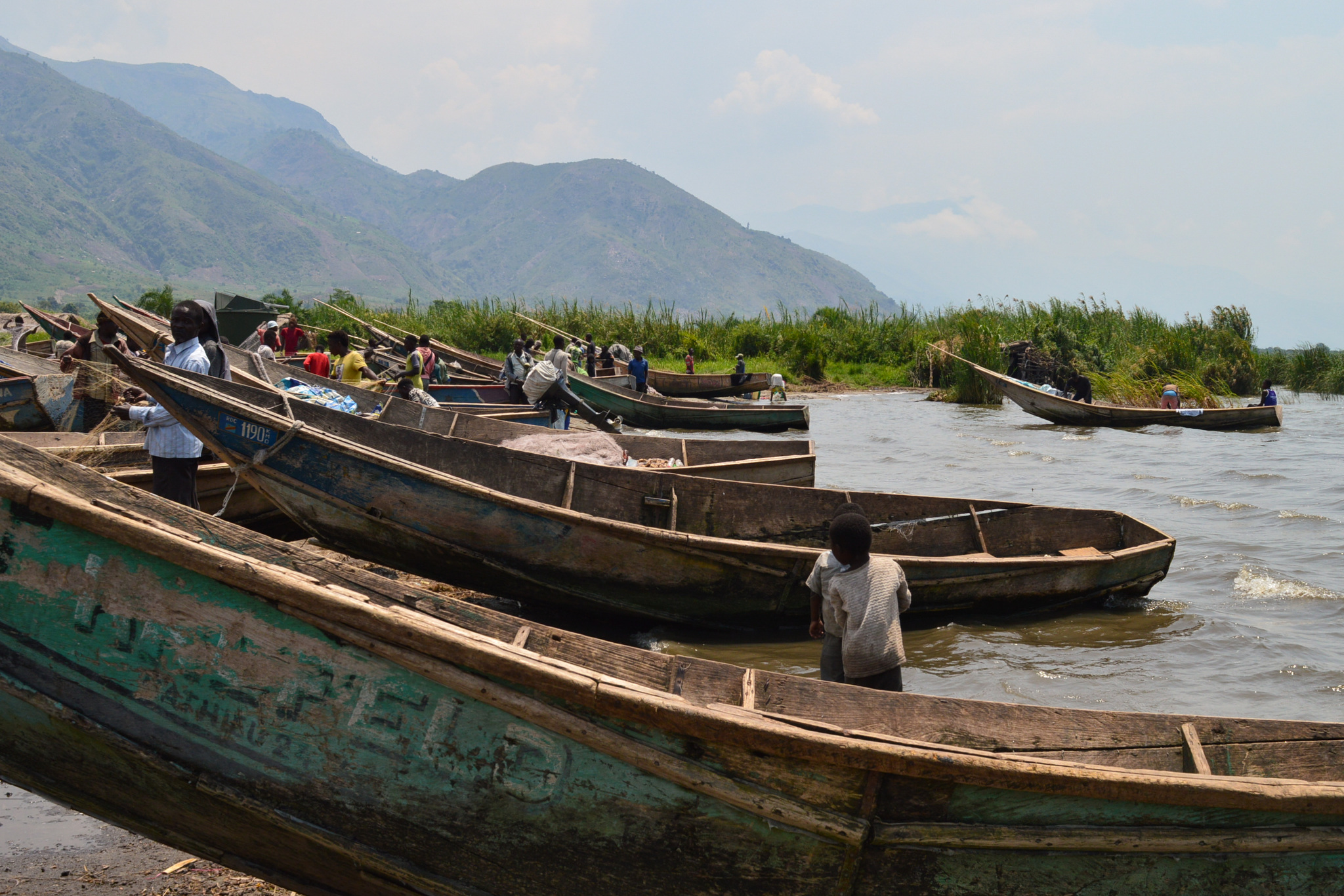 Bienvenu Bolongue, a provincial elected official from Kisangani, redirects the blame back to the fishing community. The responsibility lies with those who engage in unsustainable fishing practices like overfishing, he says, adding that fishermen often fail to comply with the fishing seasons.

The law prohibits fishing in protected areas during spawning and hatching seasons, but this rule is rarely respected by communities that rely on traditional knowledge, according to the Ministry of Environment and Sustainable Development report.

Inagosi doesn’t deny that fishermen bear some of the blame for the shortage. But he says that he only uses the fishing methods he knows.

Traditional methods have always worked despite their shortcomings, he says, but too many people are fishing in the Congo River. He wants the government to focus less on regulating this sector and more on creating jobs.

With no jobs, people can only turn to the river for food, he says.

Crispin Isomela, another fisherman from the Enya community, says the government should train artisanal fishermen on appropriate methods. “We can only do what is known to us.”

A sharp demographic growth, which the river can’t sustain, is also contributing to the shortage, says Danadu Mizani Célestin, head of the ecology department at the University of Kisangani.

Officials from the Ministry of Agriculture, Fisheries and Livestock didn’t respond to requests for comment.

Data on the fishing sector is scarce, and it’s difficult to estimate the number of artisanal fishermen in the region, Kizito says. According to the most recent U.N. estimates, 1.26 million people lived in Kisangani in 2020, more than twice the population in 2000.

And as the population increases, so does the demand and cost of fish. 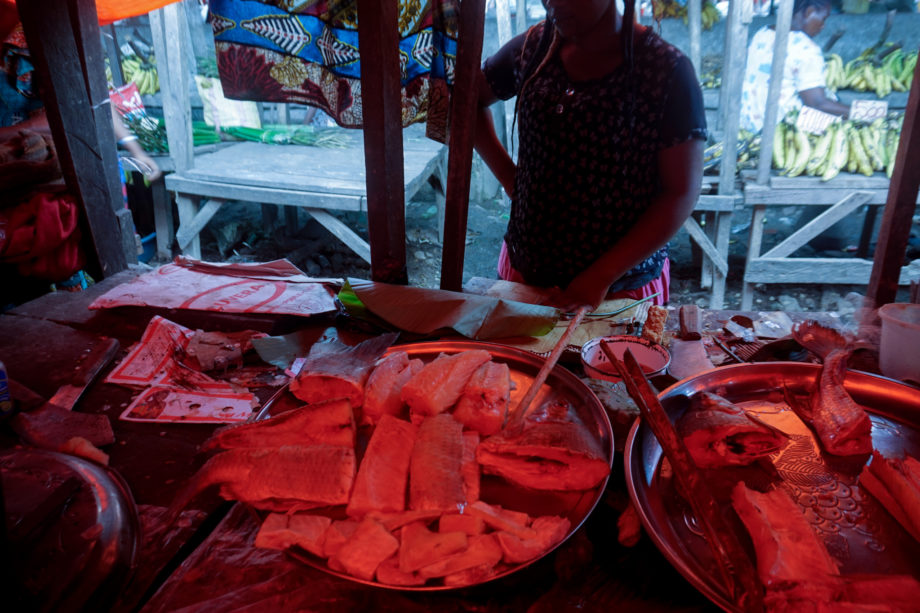 Jacqueline Mosunga, a fishmonger at the Kisangani market, says fish from Wagenia Falls is increasingly expensive.

Cécile Thianda, a housewife from Kisangani, says she can’t afford fish anymore. “I’m [no longer] interested in buying fresh fish from the river because it’s too expensive.”

Thianda says that before the current shortage, pieces of local fresh fish cost between 50 to 300 Congolese francs (between 3 and 15 cents). Now, a small piece of fresh fish costs about 2,000 francs ($1).

Given the rising cost, locals try their luck at the Zando ya Bitula (market of unsold goods), where fishmongers who lack storage facilities sell the last of their stock at a cheaper price, so it doesn’t rot. For fishmongers, this comes at a cost, says Jacqueline Mosunga, who sells fish at the Kisangani central market.

“We buy the fish from the fishermen by the Wagenia Falls at a very high price,” she says. “We then sell it at the market, whole or in pieces, and have to make sure we generate a reasonable profit.”

No side appears willing to budge. Jean Norbert Loluka Lolisambo, provincial minister of Environment and Sustainable Development, says targeting the government is an excuse to distract from irresponsible actions.

“People have taken control of the Congo River,” he says, “and are doing whatever they want.”