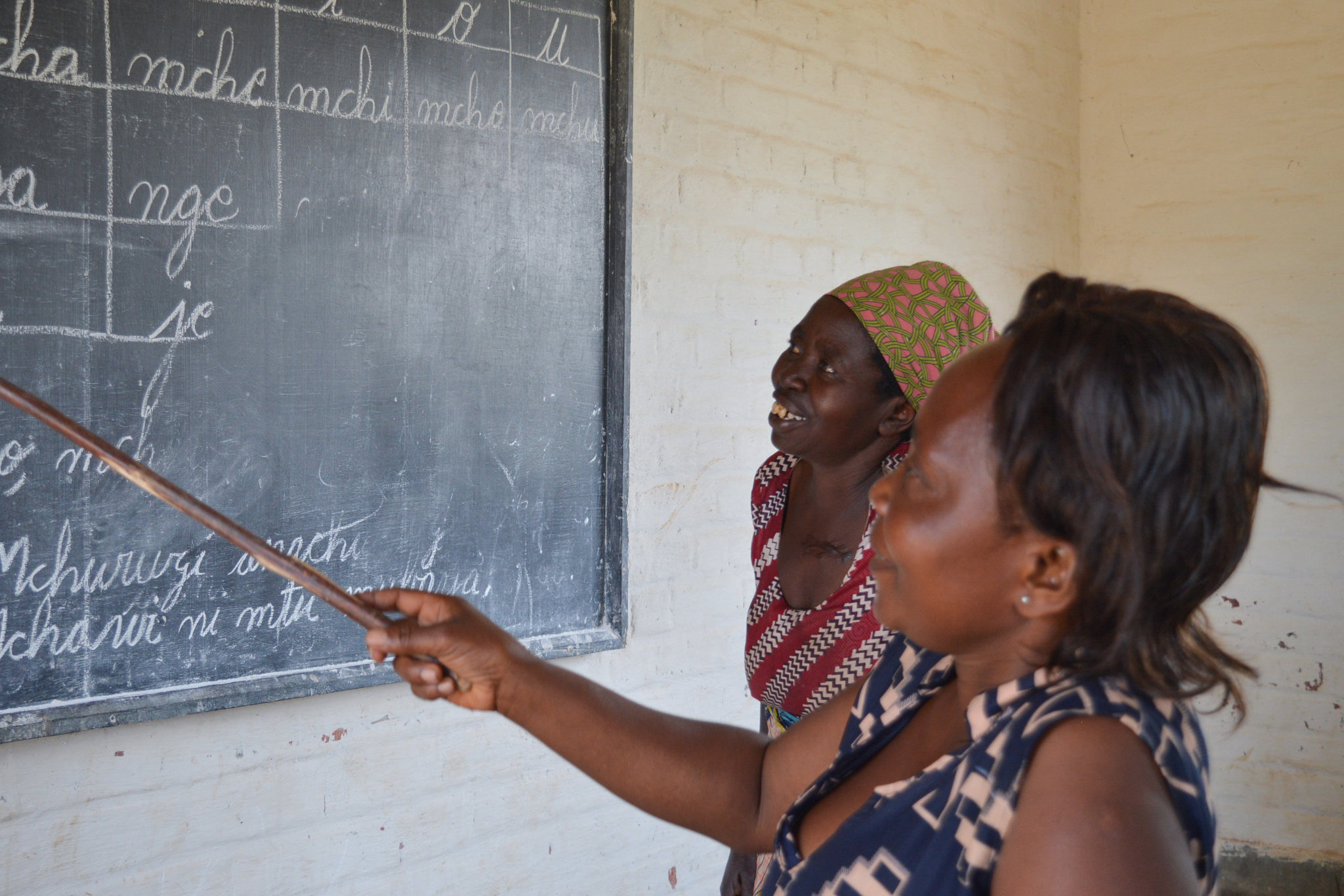 KAYNA, DEMOCRATIC REPUBLIC OF CONGO — When Kavugho Puruhya was a little girl, her parents did something that in those days wasn’t normal in their community: They enrolled her in school.

“I had always wanted to go to school, so I was very happy,” says Puruhya, who now has three children of her own.

Her parents’ act was revolutionary because back then the Nande people of Lubero territory in eastern DRC largely believed that educating girls was a waste of family resources. When a Nande woman gets married, she leaves her family and moves in with her husband’s. Many thought it made no sense to spend money to educate girls when they were going to get married and go on to benefit their husbands’ families.

For that reason, Puruhya felt privileged to be one of the few girls in her village to attend school. But her school days didn’t last long because a hearing problem she was born with made learning extremely difficult. “The environment wasn’t right,” she says. “I needed to be in a small group and people to speak louder than normal so that I could hear, but the classroom wasn’t set up that way.”

Her parents pulled her out of school. Now the 47-year-old is back in the classroom.

Women like Puruhya are flocking to the adult education centers that have recently opened across DRC to give them a second chance at education. The literacy programs are trying to bridge the formal education gender gap in the country, which according to a 2021 report from the World Economic Forum, is one of the widest in the world. A 2017-2018 national demographics survey found that about 36% of women attended the second cycle of secondary school, with only 6% of them moving on to the advanced level, compared to 53% and 11% of men.

Decades of armed conflict in eastern DRC have made it difficult to provide education, as millions have been forced to flee to neighboring countries and other parts of the country, according to the UNESCO Institute for Lifelong Learning, an education organization. 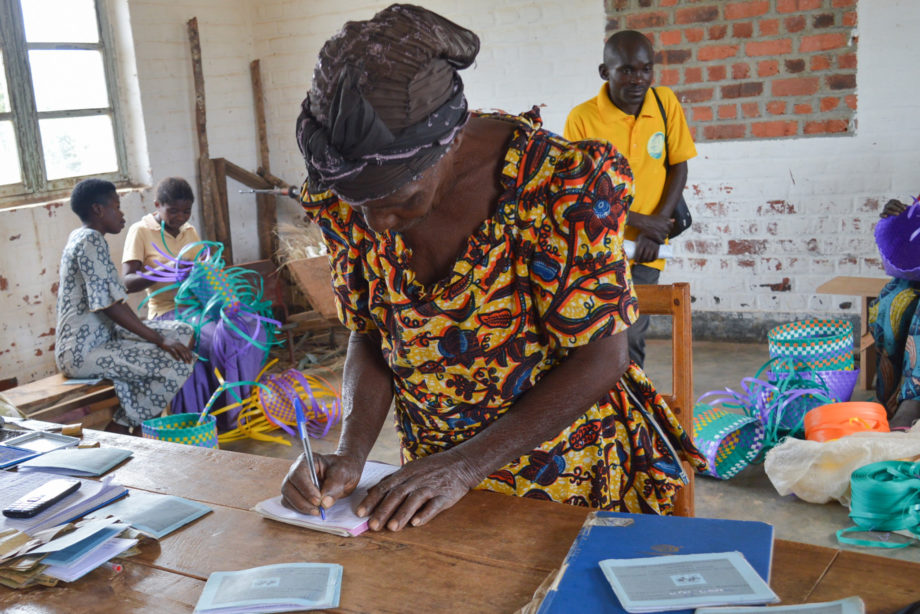 Kyakimwa Donesiana, a student in an adult education program, practices writing during a classroom session in Kayna, Lubero territory, located in eastern Democratic Republic of Congo.

The new adult literacy programs are designed to help women learn the skills they need to function in a world that is increasingly difficult to navigate without basic education, says Edwige Kanyatsi, a psychologist involved in the initiative in Lubero. “The objective is to save people, especially women, from the consequences of illiteracy,” Kanyatsi says.

The program, which is tuition free, launched in July 2021 and mostly targets women in several zones of the eastern province of North Kivu, including Nyiragongo, Masisi, Rutshuru, Rwanguba and Kayna, says Nasibu Baraka, the provincial coordinator of adult literacy programs. It is funded by the World Bank and operated by Dynamique des Femmes Juristes, a women lawyers’ organization; a literacy nonprofit known as Collectif Alpha Ujuvi; and Caritas, a coalition of Catholic charitable organizations operating in more than 160 countries.

“The results have been phenomenal,” Baraka says.

Similar initiatives have sprung up across the country, mostly provided by nonprofits and faith-based organizations like Africa Inter-Mennonite Mission, a network of Christian churches that has run the Congo Literacy Program for adults in the provinces of Kinshasa, Kwilu, Kasai, Kasai-Central and Kasai-Oriental since 2017, according to a report by the UNESCO Institute for Lifelong Learning. Although the programs are open to men, they target women because of the wide gender gap. 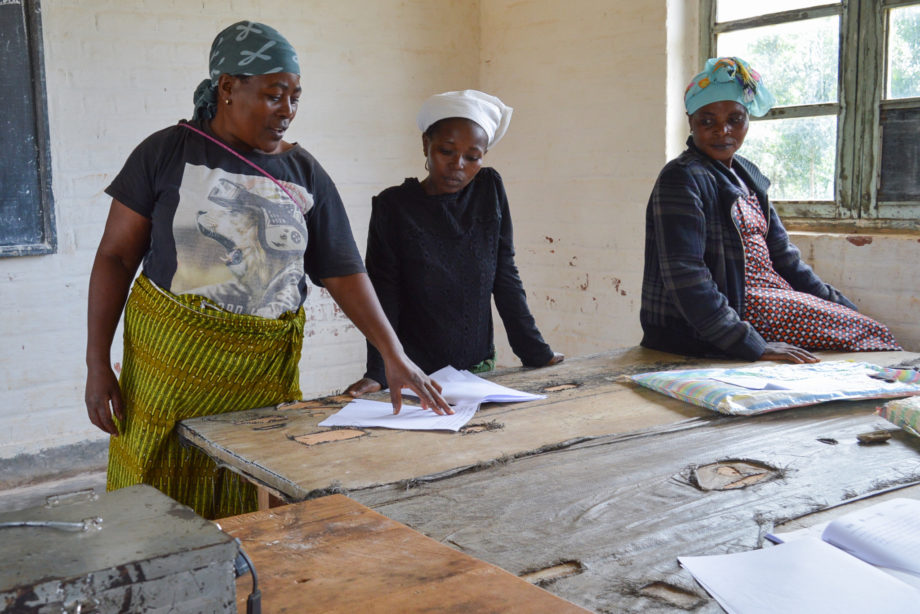 Unlike Puruhya, who dropped out because of a disability, most women in the Kayna program say they missed out on education because of discrimination against girls. Bahati Katungu Kamondi, 52, wanted to go to school, but her parents refused, saying that she didn’t need an education. “They believed that girls were only meant to work around the house, get married, give birth and spend most of their lives taking care of their children and husbands,” says Kamondi, who only recently learned how to make a phone call because she can now read.

In a classroom at a local school, about 50 women between the ages of 34 and 67 huddle around tables in small groups. Jeanne Masika Kiberiti, 46, has been teaching them basic reading, writing and arithmetic since January. She begins the session by testing the Kiswahili reading and writing skills of her students. As one student reads, others take turns trying to write the words they hear on the blackboard. At the end of the exercise, the room explodes with applause when Kiberiti announces that she is very satisfied by the way most of them read and wrote. After class, a happy Kiberiti says she’s seen the women’s lives transformed in the few months she has been teaching.

“These women can already read, write and calculate,” she says. “Even if some of them still make small mistakes, I am satisfied with the work they have done.”

“The objective is to save people, especially women, from the consequences of illiteracy."Edwige Kanyatsipsychologist

Learning reading, writing and math has made the women more independent, Kiberiti says, with some now able to venture into business or advance in their current roles. One of her students, Anastasi Kavira Sitwaminya, 35, says she tried to get formal education when she was young but couldn’t because of chronic illness. She later became a doughnut and peanut vendor, but customers would sometimes cheat her out of money because she couldn’t do basic math. “Other times, I would give more change than I owed to my customers,” she says.

In September 2021, Sitwaminya heard about a new campaign to teach women literacy skills. She decided to enroll and since then she has learned how to read, write and do basic calculations. “In the last few months, I have seen the profits of my business grow,” she says, beaming.

For Jorime Kavira Shakeha, 42, feeling wronged and helpless motivated her to seek out the education she missed as a child. She got married, and when two of her four children turned out to be girls, she sent them to school along with their brothers because she didn’t want them to suffer the way she did due to lack of literacy. “When you’re a woman who can’t read and write, what you can do is limited,” she says. 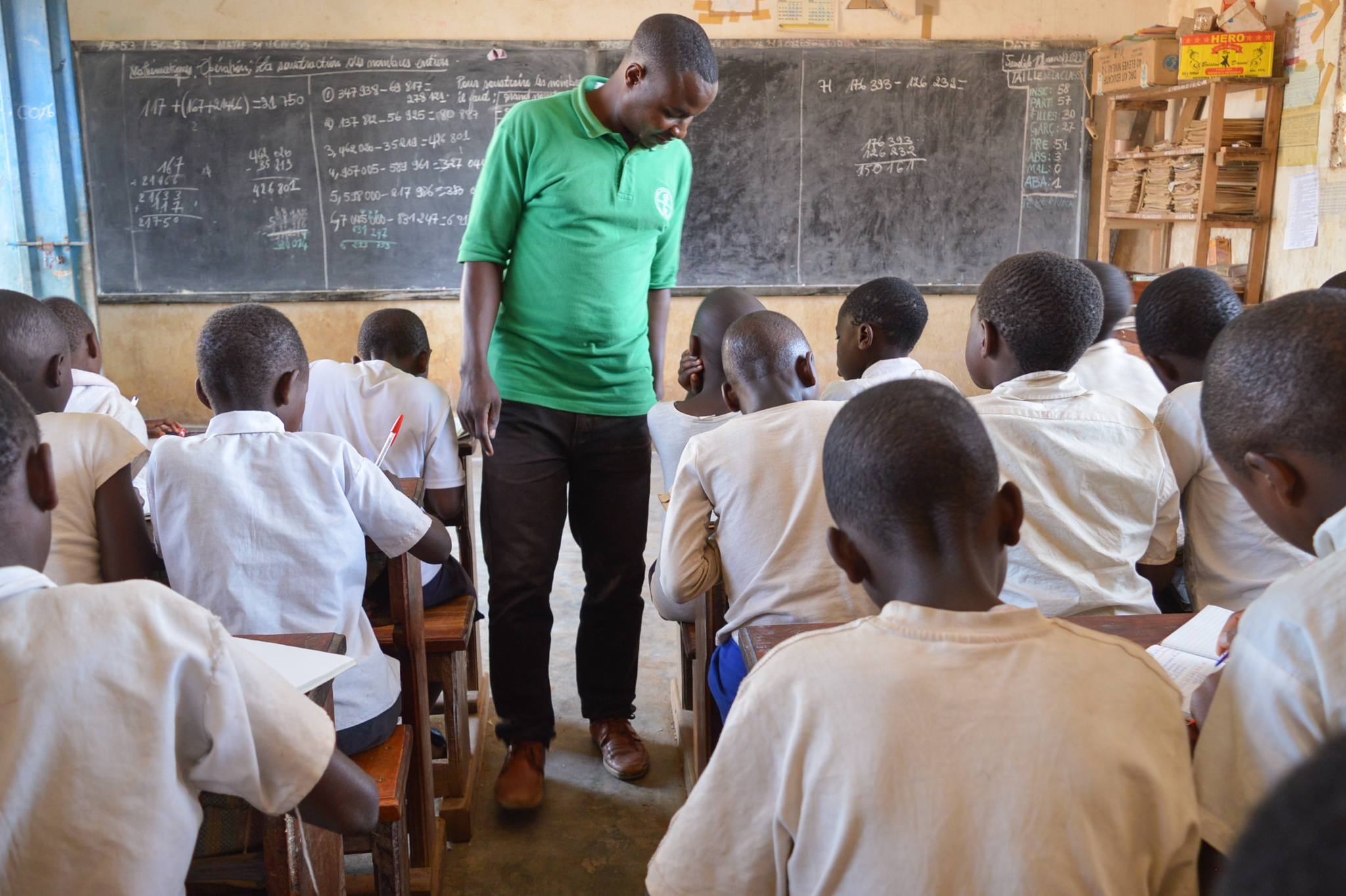 Seeing her daughters going to school took away some of those feelings of injustice, she says. But when her husband, who handled many family matters, died, she feared that the people she relied on to sign documents on her behalf could take advantage of her. When the adult literacy program started, she didn’t hesitate to enroll. She can now read the Bible and has never been happier, she says.

Another student, Kavugho Fatuma, 48, says she is encouraged that the Nande community has been reversing its tradition of barring girls from school. She noticed the change in the early 2000s, when her community began sending children to school without gender discrimination.

“People have finally understood that all children are the same, and girls can be as intelligent as boys, and even more useful to society than boys,” she says, followed by prolonged laughter.

Fatuma may be half-joking, but 76-year-old Matayo Kabuyaya says it’s something worth thinking about seriously. During a time when it wasn’t normal, he put all of his 10 children — four sons and six daughters — in school. When his sons refused to go beyond high school, he encouraged his daughters to go to college. Today, most of them are employed. He says his life as an elderly person could have been very difficult were it not for his daughters, who continue to support him even though they have married and left home.

“My daughters are the perfect example of why it is so important for a community to have educated women,” Kabuyaya says. “They have helped me so much while my sons have been wandering around without direction.”