Skip to main content
The story you are reading was published on Friday July 24, 2015. To read more recent stories click here. 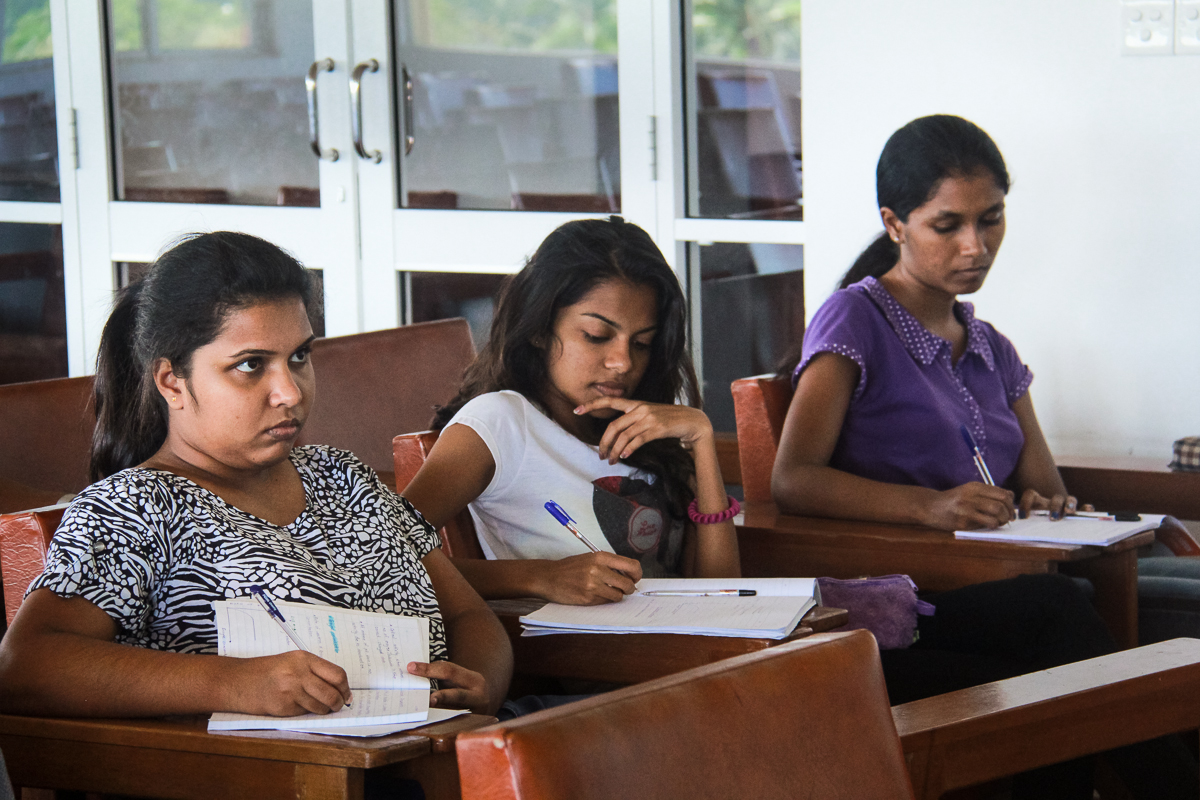 She completed all of her classwork at Horizon Campus, a private institution in Sri Lanka that was unaccredited when she enrolled, but her degree was to boast the name of a foreign university. She says she banked on that certificate to land her a spot at a top-ranked graduate school.

But while she was a student, the government used a new process, developed in secret, to accredit Horizon Campus. That should have been reassurance that the school could provide a quality education and conduct administrative tasks. Instead, Horizon Campus failed to administer the student’s final exam on time, leading the foreign university to hold off on issuing diplomas.

By Chathuri Dissanayake
Sri Lanka, the only country in South Asia that does not safeguard citizens’ right to information, has long operated behind a veil of secrecy.

The student, who asked to remain anonymous for fear of reprisals from Horizon Campus, says she had to pay an extra fee and send a family friend to collect the diploma in person. By the time she received it, she had missed deadlines to apply for graduate school.

“I am wasting six months of my life,” the student says.

The student qualified to attend one of Sri Lanka’s public universities free of charge, but there wasn’t space for her; the university system turns away an estimated 122,000 qualified students each year. Going abroad to study was too expensive, so she signed up with Horizon Campus, known formally as Horizon College of Business and Technology.

We have raised the issue with the ministry in all our correspondence, but we have never received a proper response except for one occasion.Harini Amarasuriya, a senior lecturer at the Open University of Sri Lanka and general secretary of the Federation of University Teachers’ Associations

Sri Lanka has long revered the principle of free, high-quality education for everyone. Most Sri Lankans attend free public schools in childhood, but a chronic lack of space at public universities means that only about 17 percent of qualified students get in. Many of the students who can’t get into public universities turn to private institutes – unregulated schools that administer foreign diplomas by proxy, or offer their own certificate programs.

To solve that problem, the country’s highest education officials in 2013 secretly created a process for private institutions to get national accreditation. That process, separate from the one that governs public universities, remains so secretive that even education policy groups don’t know exactly how it’s done, or who does it.

Students, universities and interest groups only learned of the change when the government announced it in the official gazette, the written record of proposed and newly enacted laws. And even though Sri Lanka’s government, elected in January 2015, promised to improve transparency, top education officials refuse to release details about the process.

“It is like the minister suddenly woke up and made this regulation,” says Harini Amarasuriya, a senior lecturer at the Open University of Sri Lanka and general secretary of the Federation of University Teachers’ Associations, or FUTA. “We knew nothing about it until it was published.”

To solve that problem, the country’s highest education officials in 2013 secretly created a process for private institutions to get national accreditation.

Amarasuriya and other opponents of the change say Sarath Amunugama, then the minister of Higher Education and Research, dangerously undermined Sri Lankans’ right to a free, quality education by making the change behind closed doors. It’s not clear whether the government is ensuring that the newly accredited private schools are offering a quality education, opponents say. Graduates could pay tuition and study for years only to discover that they’re unqualified to enter the job market. Or, they say, the change could result in a tiered education system, with wealthy students and top professors clustered in the private sector.

The minister acted within the law, says P. Ranepura, the current secretary of the Ministry of Higher Education and Research.

“He did not need to consult anybody,” Ranepura says.

Public university advocates have long been skeptical of private institutions. Sri Lanka’s education ministry has repeatedly tried to accredit them, but protests derailed those efforts.

In 1985, the government approved an amendment to the 1978 Universities Act that allowed the education minister to appoint a “specified authority” who can identify private institutions for accreditation. The amendment was intended to enable the government to approve a medical school. Under the amended law, the University Grants Commission, the body that ensures the quality of each public university program, would rigorously assess private schools seeking accreditation.

The amendment was never removed from the law, but widespread opposition kept education ministers from acting on it.

In 2011, the higher education ministry drafted legislation that would create a parallel process to accredit private schools. The Cabinet approved the draft for presentation to Parliament, but in the face of protests, the minister pulled it.

In 2012, S.B. Dissanayake, then the minister of higher education, appointed his ministry secretary as the “specified authority” – the person who can identify private schools to be considered for accreditation.

A year later, the ministry secretary announced in the government’s gazette that he had established a parallel process to assess and approve private schools seeking accreditation. The notification provided no details about the process the specified authority uses to choose a school, or the committees created to recommend accreditation.

Global Press Journal requested documentation related to the minister’s decision but was told that none exists. GPJ also has formally requested the names of the people on the assessment committees and details about how much they’re paid. The Ministry of Higher Education and Research had not provided that information as of publication time.

Ranepura confirmed that the ministry did not conduct any studies or speak with any outside experts before it created the parallel accreditation process.

As recently as January, accredited private institutions were not subject to any quality reviews, Ranepura says. The ministry has yet to establish quality assurance mechanisms, he adds.

So far, the ministry has accredited more than 10 private schools, including Horizon Campus. No records are kept on the number of students who attend these institutions, ministry officials say.

The change was especially frustrating to education interest groups, which fought hard to defeat it when it was proposed as draft legislation in 2011. Amarasuriya ,of the Federation of University Teachers’ Associations, says the higher education ministry apparently intended to slide the change through the legislative process without notice, but someone in the ministry leaked the proposed law to FUTA.

“We made the draft public,” Amarasuriya says.

FUTA then engaged in discussions on the draft.

Today we have good lecturers in our faculty, but tomorrow, if there is a bigger private university and teachers are offered large salaries, we won’t have the same opportunity, and many of us cannot afford to go to those universities.Najith Indika, leads the Inter University Students’ Federation

The commission has an established procedure and permanent standing committees, made up of deans of faculties and other prominent academics, to assess each study area of public universities, she says. If a university changes a course, it must resubmit the curriculum to the commission for review.

The secretary to the ministry has the power to appoint committee members and change the composition of the committees at any time.

The new accreditation process doesn’t have the quality assurance mechanisms guaranteed by the University Grants Commission, says attorney Canishka Witarana, who has represented students filing against the government because, they claim, it undermines Sri Lanka’s system of free education.

“Today we have good lecturers in our faculty, but tomorrow, if there is a bigger private university and teachers are offered large salaries, we won’t have the same opportunity, and many of us cannot afford to go to those universities,” Indika says.

IUSF and FUTA say the 2013 gazette should be rescinded, but neither group has had a chance to discuss the matter with the higher education minister.

“We have raised the issue with the ministry in all our correspondence, but we have never received a proper response except for one occasion,” Amarasuriya says.

That single response, from former secretary Sunil Jayantha Nawaratne, noted that the gazette was issued in accordance with government policy. Therefore, Nawaratne said, the ministry would not entertain FUTA’s requests for discussion.

There is evidence that, if unchecked, the higher education ministry would make it even easier for private schools to be accredited. According to a January 2014 proposal, private schools would no longer be required to obtain compliance certificates from relevant professional groups, as required under the regulations created in 2013. Widespread opposition from the Sri Lanka Medical Council and others forced the minister to withdraw that change in December 2014.

Amarasuriya hoped the government’s promises of greater transparency would force the higher education ministry to publicly detail the process for accrediting private schools. She had some cause for that hope: FUTA has had two discussions with some education officials, and Amarasuriya says they went well. But Sri Lanka’s Parliament has since been dissolved, and parliamentary elections are scheduled for August.

Upul Daranagama, the chairman of Horizon Campus, says the lack of quality control casts a pall on private institutions.

“They will accept it as a good and viable option and respect it,” he says.

For now, he says, Horizon Campus is reaping the benefits of accreditation. Enrollment is up, he says, but he declined to provide numbers.

“Earlier, if students were studying in private institutions, they didn’t consider it to be a proper university education,” he says. “They followed courses part-time, during weekends. Now, we have full-time students.”