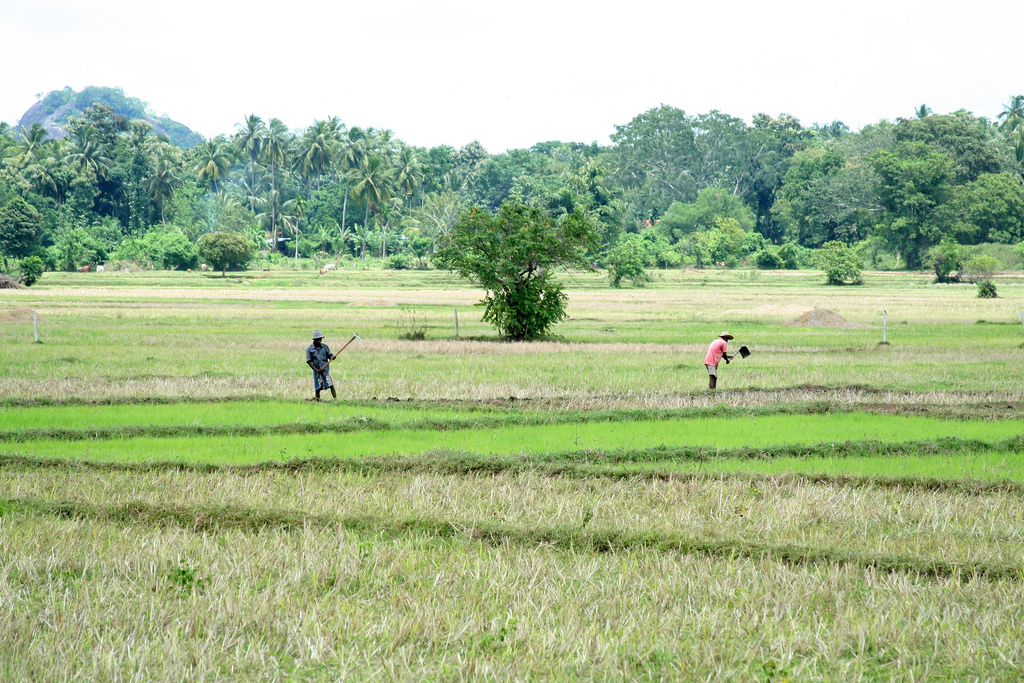 Kandegama started this 12-acre farm in 2009 with the goal of creating an environmentally friendly farming system. He says that crops should be cultivated in a way that protects the environmental balance in Sri Lanka, a country rich in biodiversity.

At his farm, Kandegama says he uses the ancient “chena” cultivation methods, a simple two-stage process in which land is slashed and burned and then seeds that require minimal tending are planted in the nutrient-rich soil. He cultivates mixed crops, such as vegetables, flowers, paddy, coconut and fruit without using any chemicals.

Instead, Kandegama relies on natural methods that provide insect and pest control without any chemicals. He says there are 29 kinds of predators that eat the nine kinds of pests in the natural chena environment.

After people began to suffer various illnesses, such as cancer and skin infections, Kandegama and other local farmers say they reverted to traditional methods, including the chena and muddy field cultivation methods.

Kandegama says he relies on the farm’s cattle for manure to fertilize the crops and milk to distribute among the school children in the adjoining day care center.

Unlike modern methods, traditional farming techniques help to preserve the environment and consumers’ health, he says.

Kandegama says that following the moon and sun, another ancient practice, leads to a good harvest.

“Sun and the moon greatly affects agricultural activities, and the color of the sun rays that fall on the earth tends to vary the life circle of plants, and also when supplying water for the growth of plants, [the] moon is very important,” he says.

He says that traditional farmers follow climactic patterns, too. Depending on which season it is – “yala,” the dry season, or “maha,” the rainy season – farmers plant different crops best suited to the climate. On modern farms, new methods sustain crops year-round.

Agriculture has long been a staple of Sri Lanka’s economy and society, but modern methods are often frowned upon here thanks to new information about risks to citizens’ health and the environment. To reduce these risks, some farmers say they have reverted to traditional methods of farming. Local health experts say this produces food that is nutritious for consumption and not harmful to the environment.

The Sri Lankan economy is agriculture-based and contributes 20 percent of the gross domestic product and 34 percent of the country’s employment, according to a 2006 report by the Center for Environmental Justice, CEJ, a national organization. CEJ has been working with the Persistent Organic Pollutants, POPs, Unit of the Ministry of Environment and other civil society organizations to make the public aware of the ill effects of POPs – chemicals such as pesticides, industrial chemicals and unintentional by-products – and find ways to eliminate them. The national government signed the Stockholm Convention – a global treaty to eliminate POPs – in 2001 and ratified it in 2005.

Targeted pesticide restrictions by the government have reduced pesticide-related deaths by 50 percent during the past two decades, according to a 2010 report by professors at University of Peradeniya, located outside of Kandy, a city in central Sri Lanka. Although the numbers of incidences have been declining every year, there were more than 17,300 cases of pesticide poisoning and almost 1,500 deaths in 2002, according to the latest statistics from the National Poison Information Center in Colombo, Sri Lanka’s commercial capital and largest city.

Agriculture has long been the main source of living in Sri Lanka and was the bedrock of ancient society here. The ancient farmers lived within an agricultural environment enveloping the temple, village and the lake.

But agriculture has been modernized throughout the years. Farmers have begun to rely on artificial fertilizer and agrochemicals because they increase production and crop yield. But environmentalists warn that these new methods harm the environment and consumers’ health.

According to the CEJ, modern farming methods that use chemicals and pesticides are hazardous to humans and pollute the water sources. Pesticide poisoning is a long-term problem in Sri Lanka, according to the World Health Organization. Pesticide-related illnesses are especially common in consumers of rice, the staple food in Sri Lanka.

Chemicals and pesticides also eliminate biodiversity, or the diversity of the environment indicated by the number of different species of plants and animals in it. The Ministry of Environment here cites loss of biodiversity and water pollution among the country’s most critical environmental issues.

The ancient farmers believed in starting their agricultural work at the “auspicious time.” For example, Tuesday was best for yams, Wednesday for leaf crops, Friday for flowers and nuts and Sunday for crops with ground roots. The farmers also considered the schedule of the sun and moon while calculating the auspicious times, which dictated all activities, including the first releasing of water on the fields, planting of plants, harvesting, bringing the harvest to the respective houses and offering the first part of the harvest to God and Lord Buddha.

Suwaris Appuharmy, 82, is another farmer who says he still follows the traditional methods.

“I start work at the auspicious time, which is very successful,” he says. “Then I add manure to the field. I add hay, cow dung, nattasooriya [and] erabadusooriya leaves and so on and trample well. Then I let it be there for about three days. Then I plough the field with buffalos.”

After, he plants the paddy seed and adds a mix of kekuna oil, mee oil and cow dung to protect the paddy plants from diseases.

For example, ancient farmers planted pawpaw trees because they believed that a chemical in them damaged the tissues in rats’ mouths, deterring them from eating their crops. In another ancient method, farmers spread sand and scraped coconut in the fields to control bugs and boiled milk in the field to destroy brown hoppers, a rice pest. Farmers using the chena cultivation method also burned the soil and added pila leaves to destroy bacteria and reduce acid.

Ancient farmers also adopted various natural methods to enrich the soil. One method was to plant mee trees, which enrich the soil with the nitrogen that bacteria produce in their roots. Each ancient field had a small space on one side called the “pillawa,” where farmers would plant various leguminous plants to enrich the soil.

Buffalos also ploughed the fields, and the size of their hooves tightened the soil to suit it for paddy cultivation. Priests from the temples, which always occupied a prime place in ancient villages, also helped to prepare the fields by blessing them with holy water and putting blessed threads in them.

Farmers would also rely on each other in a system of collaborative farming. For example, while one mother was looking after the children from the houses nearby, the other parents worked in the farms and fields.

Appuharmy also places a mal pela, a decorated structure, in the field as ancient farmers did and lights oil lamps at 6 p.m. on a special date then prays to God to protect the crops from pests. The local temple priest also comes to the field to pray and hang arecanut flowers.

Appuharmy says he also reaps the harvest and puts it onto the threshing floor at the auspicious time and using traditional methods as well.

He says that by following these methods, he can obtain nutritious rice.

Dr. Neel Shantha, a native doctor, says that the ancient methods of agriculture in Sri Lanka had many health benefits. He says the ancient kinds of paddy contained a nutritious red covering called niudda. Heenati paddy produced rice that had the necessary nutrients for mothers to produce milk for breast-feeding. Mawee, a kind of paddy, reduced the level of fat in paddy and contained enough nutrients to sustain someone for a whole day. Ancient grains like paddy and kurakkan, or finger millet, were effective at controlling obesity and diabetes.