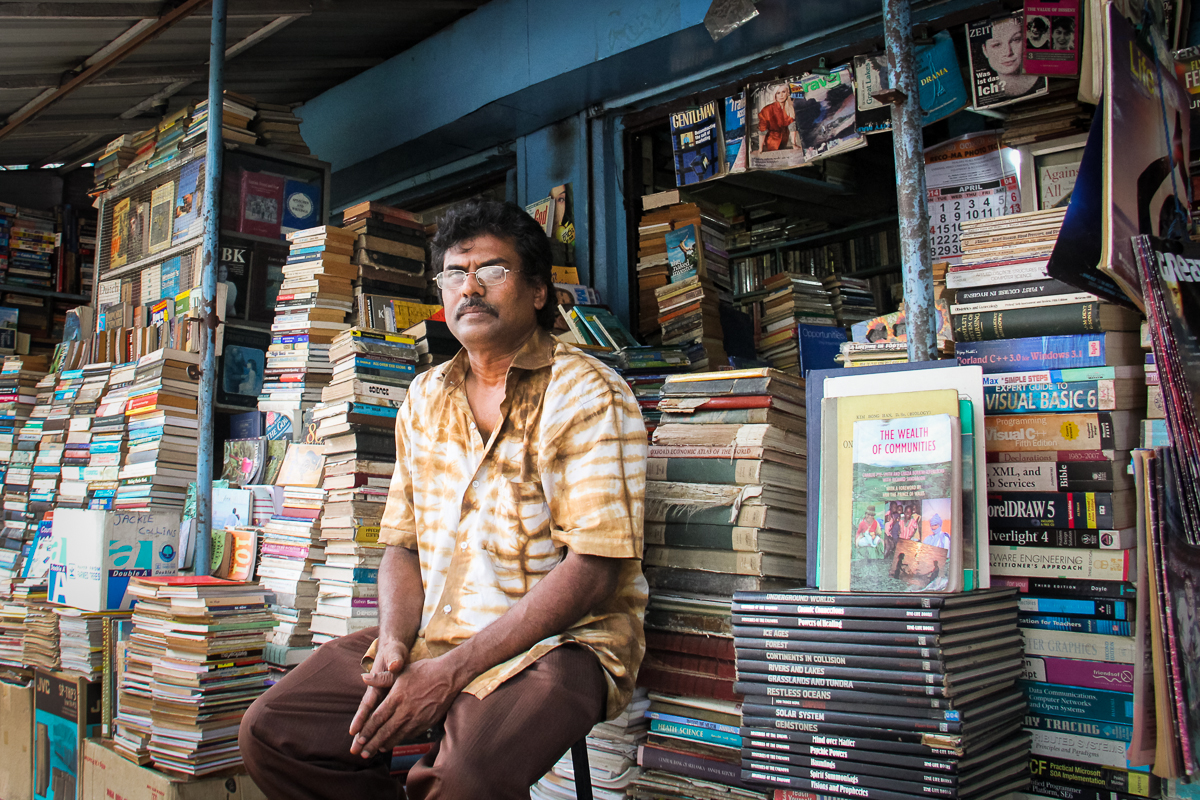 COLOMBO, SRI LANKA – A man with a list of book titles enters a secondhand bookshop on a tree-lined street in Colombo, the commercial capital of Sri Lanka.

Bookseller Tharaka Warnasuriya glances at the list and immediately confirms that he has three of the books in his shop. He tells the customer he will find the books and have them ready for him the next day. The man thanks him and moves on to the next shop in his search for the other titles on his list.

Warnasuriya explains that the man had borrowed the books on the list from a public lending library, lost them and now needed to replace them.

“They are old books,” Warnasuriya says as he scans the titles on a shelf at the far end of the shop. “They can’t be bought from regular bookshops because they are no longer in print.”

The dim interior of the shop, lit with a single light bulb, is redolent of old books.

Within a few minutes, Warnasuriya identifies the three books the customer had requested.

Warnasuriya is the owner of Warnasuriya Book Depot in Colombo 10, an area of Colombo. His shop is one of 14 secondhand bookshops along D.R. Wijewardena Mawatha, an avenue marked by government buildings constructed during the British colonial era.

The bookstore cluster on the D.R. Wijewardena Mawatha has become a popular landmark over the past 30 years. The only place in the city that is home to more than a dozen secondhand bookshops, it is well-known to book lovers as well as the occasional customer in search of an old or rare volume, Warnasuriya says.

Warnasuriya’s father started the bookshop as a small kiosk in another part of Colombo in the mid-1970s, Warnasuriya says. When the elder Warnasuriya moved the shop to its current location in 1976, it was only the second bookshop on the D.R. Wijewardena Mawatha.

Other secondhand bookshops on the avenue have also been owned by the same families for two or three generations.

The government owns the land on which the simple shops are built. Rents vary according to shop size. Warnasuriya pays 2,500 rupees ($19) a month.

But Warnasuriya and the other 13 booksellers on the D.R. Wijewardena Mawatha know they may soon have to move their shops. They have been preparing themselves for the possibility of relocation since 2011, when the government began tearing down nearby buildings to make way for a development project.

Warnasuriya says the renters do not expect much advance notice of eviction.

“As the bookshops are temporary structures which have been put up on government-owned land … we will have to leave within 24 hours of receiving notice,” he says.

Warnasuriya visited several government offices in search of answers last year and again this year, he says. He has been told only that the government will inform the merchants of their fate once it has made a decision.

“Not knowing what is going to happen is frustrating,” he says. “We can’t make plans, and if they say ‘go,’ we have to go whether or not we are given alternative places. It’s so frustrating!”

The merchants are uncertain of their future because the land on which the bookshops are built has been earmarked for development for leisure and entertainment facilities. They hope their shops can be integrated into the planned facilities.

The Lotus Tower Project, a hotel and entertainment complex, is under construction in the area where the bookshops are located.

The project will include a luxury hotel, exhibition spaces, an auditorium, banquet halls, a telecommunications museum, shops and restaurants, says Weerasena Adikari, a consultant to the authority and former deputy director general of the agency.

The antenna atop the tower will broadcast signals for scores of television, radio and telecommunications companies, Adikari says.

Construction of the tower began in January 2012 and is scheduled for completion in 2016. The construction cost, approximately $104 million, is financed through the Export-Import Bank of China. The 350-meter (1,148-foot) tower will be a national landmark, Adikari says.

Construction of the Lotus Tower and development of its surroundings as a tourism zone are part of the regeneration of Colombo, he says. Areas of the D.R. Wijewardena Mawatha will be developed as parks and public spaces.

“The profile and the landscape of the city will change,” Adikari says. “Currently it is not a planned city. After development is done, it will be an orderly city.”

The Sri Lankan government intends to make Colombo one of the most vibrant cities in Asia, says Jagath Munasinghe, head of the Department of Town and Country Planning at the University of Moratuwa.

Redevelopment of Colombo started in 2010, a year after the conclusion of an internal military conflict that lasted for nearly 26 years, Munasinghe says in a phone interview.

Big projects, such as the Port City Project and the Lotus Tower Project, are designed to create large-scale change and attract investors, Munasinghe says. The redevelopment also includes smaller-scale projects, including the renovation and renewal of colonial buildings, the creation of parks and public squares, road expansions and improvement of the city’s infrastructure.

Munasinghe acknowledges that the restoration of old buildings and the construction of high-end projects are putting redeveloped parts of Colombo out of the reach of middle- and lower-class Sri Lankans.

“There is a situation of gentrification in the city right now,” he says.

Gentrification is the process of renewal and rebuilding accompanying the influx of middle-class and affluent people into deteriorating areas. It often displaces poorer residents and small businesses, like the secondhand bookshops.

But the shops serve the community, says Priyankara Pitiduwagamage, co-manager and former owner of Priyankara Bookshop, a secondhand bookshop on the D.R. Wijewardena Mawatha.

Priyankara Bookshop draws about 15 to 20 customers a day during the week and more on weekends, Pitiduwagamage says. Many are regulars, ranging from students to families.

Students buy their academic textbooks for a quarter of the price of new books, and book lovers can buy novels and literary classics at bargain prices, he says.

A copy of Jane Austen’s “Pride and Prejudice,” a book that secondary school students often need for English literature courses, can be bought at Priyankara Bookshop for 400 rupees ($3), while a new edition retails for 1,500 rupees ($11.50), Pitiduwagamage says.

“We have loyal customers who continue to come,” he says. “There are families who have been coming for generations.”

Pitiduwagamage started working for his father at the bookshop after completing his secondary education more than 30 years ago. He recently handed ownership of the shop to his son, R.M.D. Pitiduwagamage; father and son manage the shop together.

Pitiduwagamage is concerned that a new location will hurt the family business, which has established a following on the D.R. Wijewardena Mawatha.

“If the new location doesn’t attract enough customers, our business won’t survive,” he says, a worried frown marring his face.

Warnasuriya and other secondhand bookshop owners are resigned to the fate that awaits them, but the uncertainty makes them anxious, he says. Their biggest concern is where they will be relocated.

“Our business is a unique one, so the location matters,” Warnasuriya says. “A shop in a market, or where there is no parking available, will not work for us. About 70 percent of our customers come in a vehicle, so if there is no parking, then we will be overlooked.”

Many young customers carry on the custom of heading to the D.R. Wijewardena Mawatha for book bargains.

Joshua Perera, 23, travels 12 kilometers (7 miles) from his home in Nugegoda, a suburb of Colombo, to buy books at the secondhand shops.

It’s a long way to travel when there are bookshops closer to his home, but Perera loves the ambience of the secondhand shops, he says.

“It’s shady, and you find towers and towers of books around you, plus the people are so helpful,” Perera says. “If you want to find a book, they go out of their way to help.”

Perera has been visiting the shops for more than seven years. A friend introduced him to the book district when he was in secondary school.

He often buys works of literature published by Penguin Classics, he says. He finds many types of books he can’t locate anywhere else.

Customers value the relaxed, easygoing nature of the secondhand shops, the booksellers say.

Some customers borrow books instead of purchasing them, says Athula Kumarasiri, an assistant at Sarath Bookshop. Customers put down a deposit for each book they borrow; when they return borrowed books, they can claim their deposits or borrow other books.

Booksellers lend books at no profit to encourage patrons to visit. They know that regulars often bring book-buying friends and family members when they drop in.

Some customers bring in a used book to exchange for another.

The booksellers never run out of suppliers, Warnasuriya says. They get their wares from ordinary readers, people who are leaving the country, libraries that are shutting down, and students who have completed courses. The merchants negotiate the prices of their acquisitions.

The rapid pace of the development and the demolition of unlawful structures have upset some segments of society in Colombo, Munasinghe says. In addition, some communities outside Colombo are unhappy that most of the development work is being done in the commercial capital.

However, Munasinghe notes that gentrification can still have positive effects.

“The change in the city is good, whether you are from the high end or low end of the society,” Munasinghe says. “The city is clean, pleasant, and one feels safe to walk around now. That is a positive benefit that has come from the development.”

Criticism of the trend will subside when the Urban Development Authority begins the second phase of development, which will include facilities and services for low-income families, Munasinghe says.

Adikari says that for now, relocating the secondhand bookshops is not a priority.

“We haven’t made any decisions about the secondhand bookshops – whether they will be kept in the same area or relocated,” he says. “They are welcome to stay where they are for now until a decision is made.”

However, when the Lotus Tower Project opens to the public in 2016, the government will need to beautify the area, he says. A face-lift of the avenue on which the bookshops are located will be planned as that time approaches.

“Keeping those shops will be difficult,” Adikari says. “As it is, they look ugly.”

Across the road from the bookshops, construction of the Lotus Tower progresses rapidly.

As each level of construction is completed, Warnasuriya feels the uncertainty of his future. He and other booksellers hope their shops can be integrated into the leisure and entertainment facilities planned for the area.

“If they can develop this stretch of road and let us stay, it would be ideal,” Warnasuriya says. “Our bookshops also fit the tourism and leisure theme of the project.”

Perera agrees with the shop owners that the current location of the bookshops is ideal, especially as they are easily accessible by bus and train. He hopes the bookshops will stay where they are or be relocated to a nearby site.

“It would be a tragedy to lose this ambience,” he says.