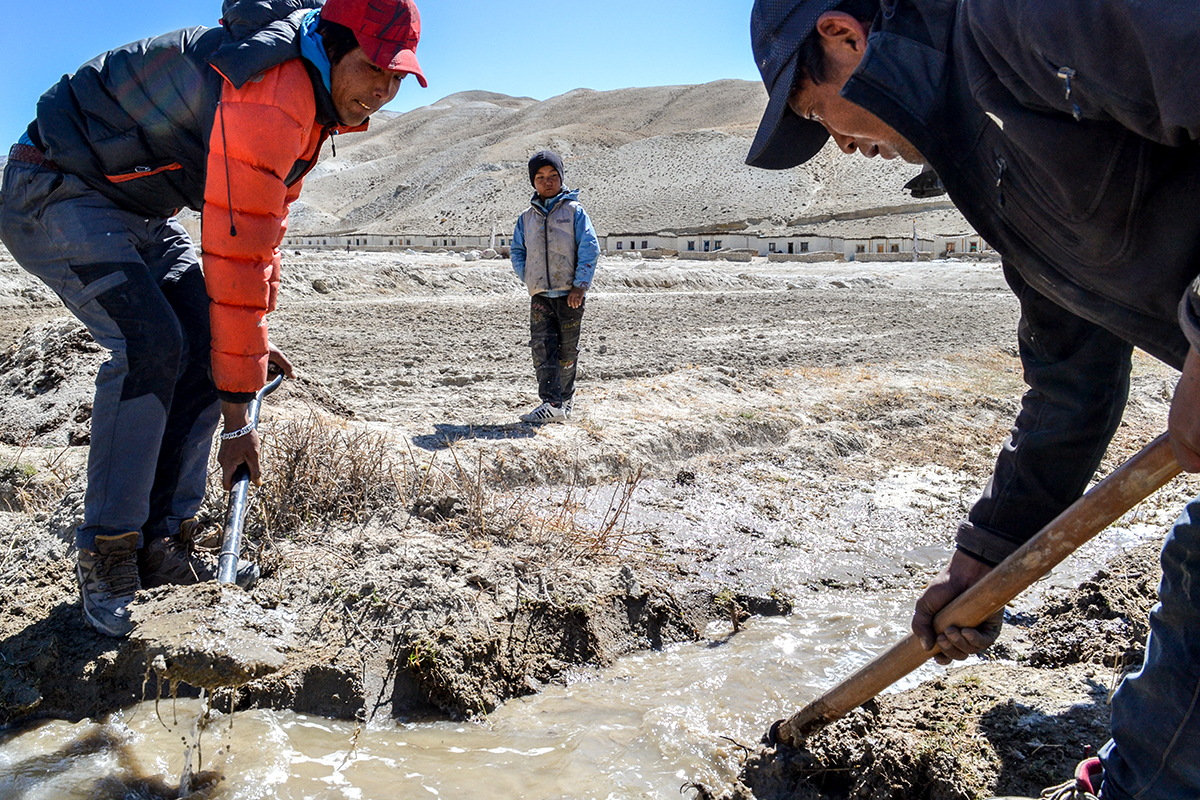 NAMASHUNG, NEPAL — Five years ago, the 18 families that lived together in Samzong, a remote village high in the Tibetan Plateau, made a radical decision: Pack up everything and move about 8 kilometers (5 miles) southwest, to an area where water is still plentiful enough to grow crops.

It was a choice they made to survive. In Samzong, their traditional home, once-lush barley and pea fields had shrivelled. Cattle roamed in search of water.

INSIDE THE STORY: Global Press Journal reporter Shilu Manandhar has made the long and arduous journey to Nepal’s Upper Mustang region four times to cover a village’s relocation due to water shortage. Once there, Manandhar found that the village’s remoteness couldn’t protect it from the pervasive effects of global warming. Read the blog.

Around the world, rural people who find that their land no longer produces the food they need often migrate to more populated areas, changing their eating habits in the process. The people of Samzong chose differently.

The move took more than four years, but payoffs are visible now. The people celebrated their first harvest in the fall. In April, they dug new irrigation channels and sowed seeds again.

“There is plenty of water here,” says Pasang Tshering Gurung, a 32-year-old who toiled under the scorching sun to connect a dry, barren field to the water from a nearby river.

Within days, that field would be planted with buckwheat seeds.

The village’s decision to pack up and start over, as a group, is a significant departure from global trends. Food insecurity is one of the key drivers of migration around the world, but in most cases, hungry rural people wind up in urban areas. There, they might find education and job opportunities, but they sometimes lose control over what and how they eat. In fact, many people who migrate to urban areas face food insecurity and even malnutrition, in addition to threats to their physical safety, according to research by the International Organization for Migration. 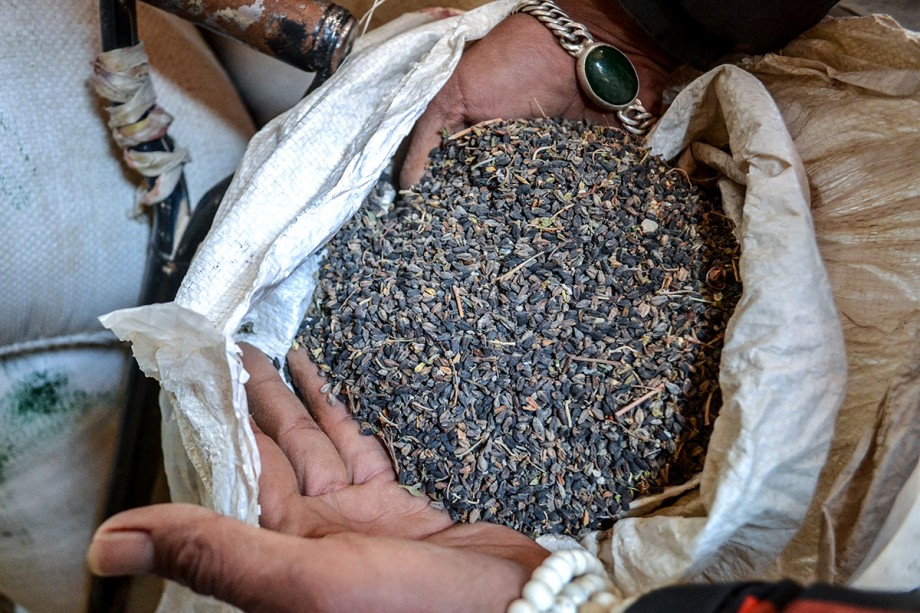 Pasang Tshering Gurung shows the buckwheat he gleaned from the previous year’s harvest. The yield was divided among 18 households.

More people than ever before in recorded history are on the move, and landmark research published in May by the World Food Programme, the U.N.’s food aid division, found that these global migration trends are almost always connected in some way to food insecurity. When people must move, the researchers concluded, those who remain close to their home areas are most likely to create satisfactory lives for themselves and eliminate the need to continue their journeys.

The people of Samzong made their move without any major outside assistance other than some help from the Lo Mustang Foundation, a local organization and a donation from a Swiss photographer who visited the area. The river near their village had dried up as rain became more scarce and as the Tibetan Plateau’s snowpack shrinks. Samjwal Ratna Bajracharya, a remote sensing specialist at the International Center for Integrated Mountain Development, told GPJ in 2014 that Nepal’s glacial area shrinks by 38 square kilometers (14.7 square miles) per year. (Read that story here.)

The villagers are Tibetans by ancestry. They say their forebears settled in Samzong half a millennium ago and successfully grew their own food for generations. But the nearby Samzong Khola river, the lifeline for the village’s crops, began to dry up about 35 years ago.

The people were forced to hike to the Chinese border or to Lo Manthang, the capital of Upper Mustang region, to buy food — places where they once sold the surplus from their fields. 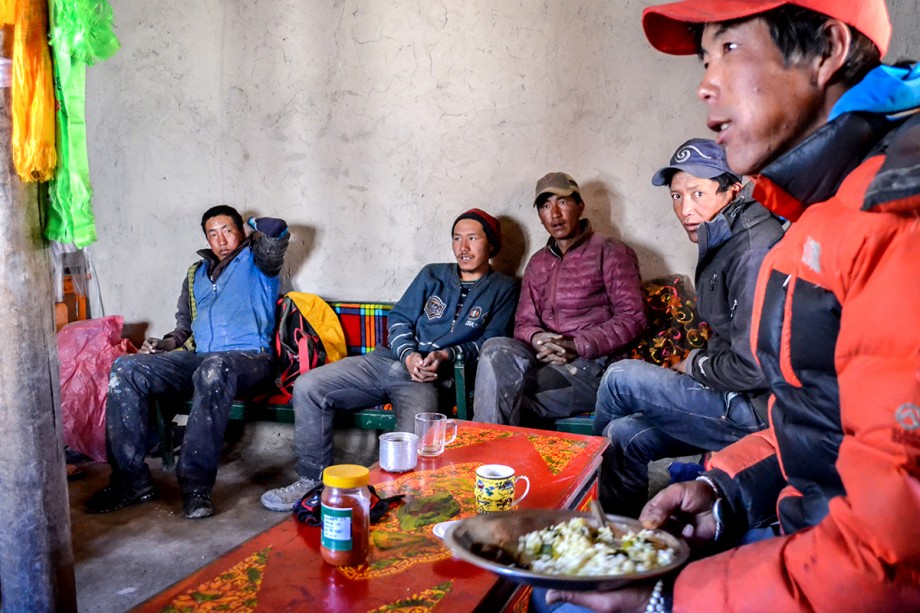 Pasang Tshering Gurung (right) eats lunch in his house after working in nearby fields. Everyone in in the village is involved in agricultural work and the entire harvest is shared.

The region’s royal family donated about 10 hectares (25 acres) in the Namashung area, 4 kilometers (2.5 miles) from Lo Manthang, to the people of Samzong to build a new village and develop farmland along the nearby Kali Gandaki River. In 2013, the villagers started to build a row of identical homes in the new location. A gift of $6.7 million Nepalese rupees (about $65,000) from a Swiss photographer helped them clear boulders and buy supplies, but they built the homes themselves, by hand.

“The river runs near the fields,” Pasang Gurung says. “There is plenty of water. We have five times more water here than we had in Samzong.”

Now, with one successful harvest behind them, they’re expanding their fields, which are owned and worked communally.

The Upper Mustang region is remote, but Samzong is considered hard to reach even by local standards. It is only accessible by hiking on foot or by taking a three-hour horseback ride from Lo Manthang.

But Namashung is nearer to other villages and is accessible by road.

Access to other places is key to diversifying any community’s diet, says Suresh Babu Tiwari, a joint secretary in the Ministry of Agricultural Development. Across Nepal, Tiwari’s ministry is working to help people have a healthy, balanced diet. 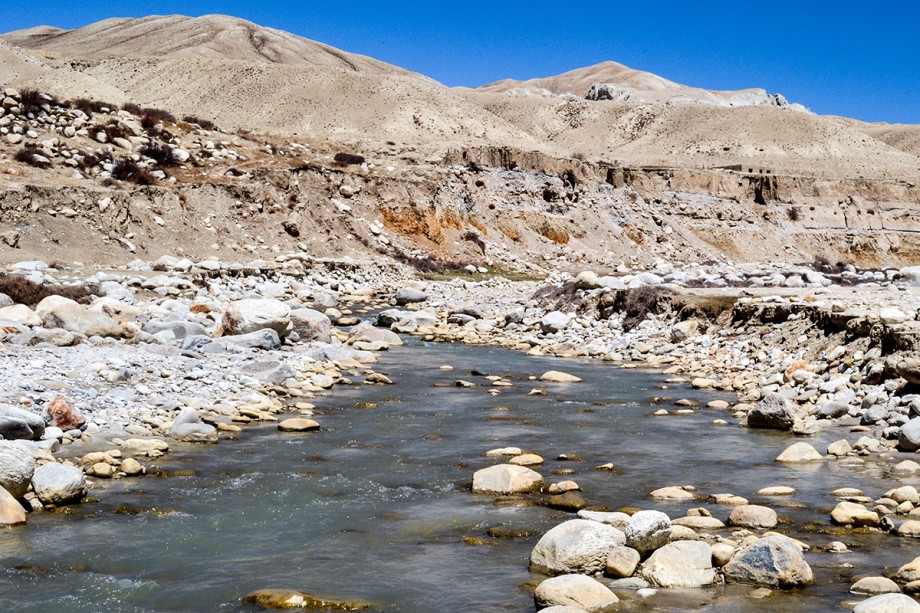 The Kali Gandaki River flows near new fields in Namashung in the Upper Mustang region. The people of this village moved to be closer to water.

Most Nepalese — 68 percent of all workers — are engaged in agriculture, according to International Labour Organization data. Even so, an estimated 41 percent of children under the age of 5 have stunted growth due to malnutrition, according to the World Food Programme, and food prices are high, especially in rural areas.

Across the country, though, people’s standards of living are improving, Tiwari says.

“Road access and market penetration have given the consumer many choices,” he says.

“We have left our cattle in Samzong,” Mingma Dhondup Gurung, 34, says. “One member of the family stays in Samzong to take care of the cattle.”

The cattle will join the village once the fields are complete and grazing land can be established.

For now, there’s no rush.

“Everything will be fine,” Pasang Tshering Gurung says. “There is enough water and the harvest is good. Now we don’t have to move.” 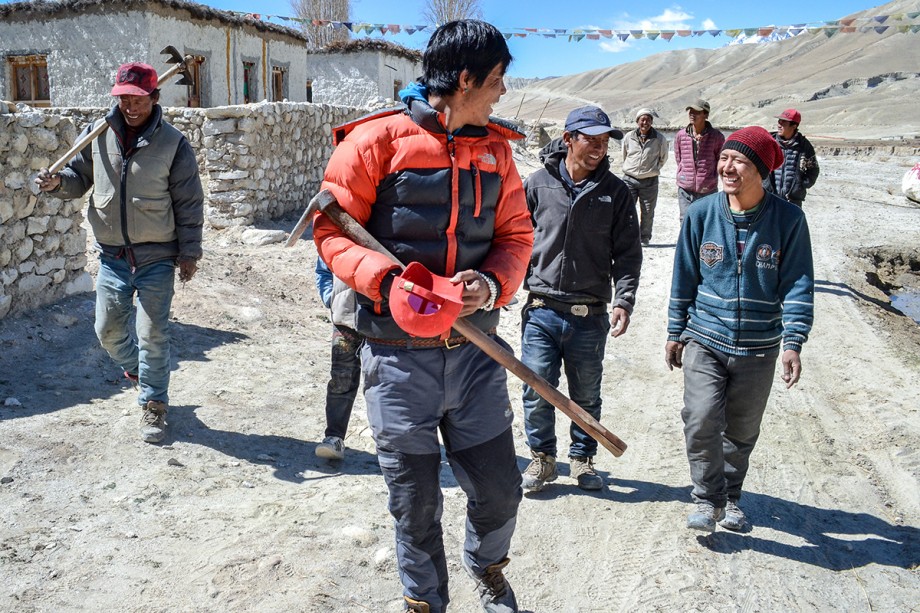 Villagers walk back to their village after working in their fields in Nepal’s Upper Mustang region.

EDITOR’S NOTE: Pasang Tshering Gurung and Mingma Dhondup Gurung are not related. They share a caste name common to the area.