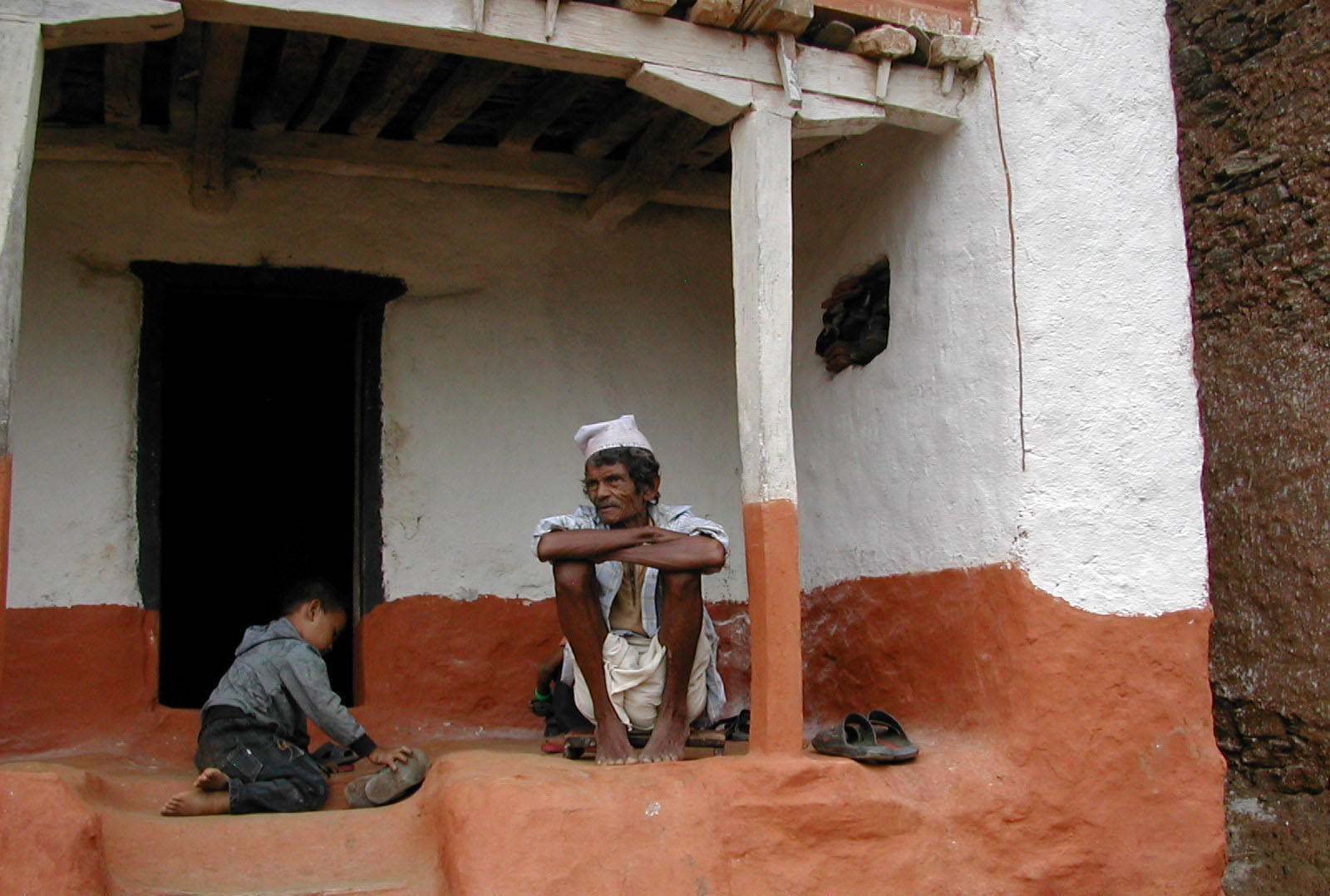 BAHUNIPATI, NORTHEASTERN NEPAL – A cluster of huts along the Indrawati River, one of the tributaries of Nepal’s biggest river, the Saptakoshi, are inhabited by a tribal community of fishermen called the Majhis. Once abundant with fish and the Majhis’ only source of livelihood, the river now has nothing to offer to them, the fishermen say.

These days the river has been taken over by crusher industries, which export river-based items such as crushed stones and sand with heavy mining equipment. Although the Majhi population is spread throughout different village development committees – subdivisions of Nepal’s districts known as VDCs meant to give villagers a greater say in governmental decisions – the crusher industries have jeopardized the livelihood, and even the existence, of this ancient tribe.

Among dozens of huts in the Bahunipati VDC, Tirtha Bahadur Majhi has a two-story house made of rocks, mud and a corrugated tin roof. The 60-year-old father of four sons and eight grandchildren, Tirtha says he tries to keep his spirits up. But after another morning of futile attempts to catch fish in the once abundant river, he takes a frustrated break, lying on his porch where the cool breeze from the Indrawati is constant.

“There are no fish in the river,” he says. “Hardly, I can catch a pound of fish a day, which is not enough to feed my family.”

Majhi says that five years ago, he used to catch 20 times as many fish in the Indrawati between September and January – the fishing season that is characterized by no rainfall and clear water. He says on days like today, he likes to remember those good old days.

“I used to catch about 10 kilograms (22 pounds) of fish and sell them in the market,” he says in a nostalgic tone. “My ancestors earned their livelihood from fishing and ferrying people to and fro across this river. I [raised] my four kids the same way. But now things have changed. To think that one can eke out a living through fishing is just a pipedream.”

Krishna Bahadur Majhi, 42, of the Sikharpur VDC, a neighboring village, has the same story to tell. He, too, used to support his family by fishing and operating a wooden boat to carry people across the Indrawati.

Today, both Tirtha and Krishna, who both have the traditional last name of Majhi but are not related, say they can no longer make a living fishing and boating thanks to the crusher industries that began mining and working here three years ago. Krishna says the large machines they use have disturbed aquatic life; removed sand and river banks; and constructed dams, embankments and bridges that have drastically altered the ecosystem that the Majhi built their livelihoods around for generations. Soon after the crusher industries came into operation, the fish population sharply declined.

“People destroyed habitats of fish,” he says. “They constructed dams in the river and channeled the water into construction sites, disturbing the marine life and putting our traditional occupations at extinction.”

As a result, Krishna says he had no choice but to give up his ancestral occupation and look for an alternative. After the crusher industries put him out of work as a fisherman, he took a job as a day laborer for a stone crusher company. He says he earns 150 rupees per day, $2.10 USD. He says his new job gives him some reprieve from the financial hardship he felt as a fisherman, but he wishes he did not work for the same company that put him out of business in his traditional trade. But Krishna says he cannot read and write so few jobs were available to him.

Krishna, whose family battled poverty throughout his childhood, never attended school. Instead he spent his days studying his father’s net-casting techniques and mastered the art of fishing. He says he also used to ferry people across the river in a wooden boat that disappeared with the construction of a bridge over the river.

“It is hard to give up the job with which one grew up,” he says. “To me, the river is like a home, very close to my heart, as I have spent half of my life here. Now I feel like a stranger in my own home.”

But he is not alone. There are nearly 6,000 Majhi families in Bahunipati and neighboring VDCs who were forced to quit their traditional occupation of fishing and operating wooden boats in rivers and opt for other professions. Netra Bahadur Majhi, a local, estimates that about 90 percent of Bahunipati’s fishermen and boatmen are now working as industrial workers or mechanics for the very industries that destroyed their traditional occupations. Fishermen say that the massive scale of the ongoing construction of roads, bridges and dams; sand extraction; industrial discharges in rivers; blast and electrofishing; and rampant deforestation – among other activities – are to blame for displacing them from their traditional professions.

“Our ancestral occupations have been pushed to such a level of extinction that we fishermen ourselves have forgotten [what] a fish looks like,” Netra says with a sarcastic smile.

According to the 2001 national census, the most recent in Nepal, there are 72,614 Majhis living in 68 districts of Nepal. Dhan Bahadur Majhi, chairman of the Majhi Development and Research Committee, an organization that works for the welfare of the Majhi community, estimates that while the Majhi are losing their professions, the population of Majhi has likely grown to more than 100,000.

Household distribution statistics show that Majhis mainly reside by the big rivers, such as the Sunkoshi, Indrawati, Tamakoshi, Likhu, Dudhkoshi, Arun, Tamor and Kali Gandaki. Their occupations included fishing, making wooden boats and ferrying people across the river. But as construction and industry began to boom in river regions, the Majhi have been forced to find new professions because their skills and knowledge failed to become a source of income in the changing time, Dhan says.

The government has granted the authority to local bodies, such as district development committees and VDCs, to lease rivers for the extraction of sand and boulders, as well as the construction of micro-hydropower projects in order to raise revenue. But in some places, private companies have gained the upper hand and are monopolizing the rivers.

“Some contractors are extracting sand and boulders haphazardly in rivers, putting the life of water bodies at risk and making irrigation impossible,” says Atma Ram Regmi, the secretary of Darsing Dahathum VDC in western Nepal.

Like in the Sindhupalchowk district, where Sikharpur is located, people of many remote VDCs across the Kali Gandaki River, who earlier had to depend on boatmen to cross the river, now use bridges.

“Construction of bridges has displaced more than two dozen boatmen in the region,” Regmi says. “Equal numbers of fishermen have taken up other professions after fish population fell sharply in Kali Gandaki, which was earlier famous for yummy fish.”

Kali Gandaki River was the only source of livelihood for Kamal Bote until eight months ago. The lone breadwinner of his six-member family, Bote is into ginger farming nowadays after quitting fishing.

“Just some one year ago, fishing was a profitable venture,” Bote says. “But the situation is completely opposite now. I still remember the time when I used to catch at least 10 kilograms of fish on a single day.”

Tirtha also used to catch enough fish that he used to save some money even after taking care of his family. He used to catch 10 to 15 kilograms of fish daily. But now he can hardly catch 1 kilogram of fish in a whole day, thanks to the crusher industries that pushed fish found in the river to extinction, displacing them from their ancient profession, he says.

“Without our consent, the crusher industries came into operation,” Tirtha says. “Not even a single fish can be found. Our bread has been snatched.”

Currently, there are 27 crusher industries operating in Indrawati alone, and a hydropower project is under construction. Melamchi Drinking Water Project, which is being constructed to ease severe drinking water problems of the capital city, is also almost halfway done. The rapid scale of construction of these projects has affected the reproduction of fish in the river, says Chandra Bahadur Majhi, another local who also lives near the Indrawati.

“The government has taken over the river, which is an income source of our community,” Chandra says. “It’s not fair.”

As of now, Nepal’s law authorizes the state to use local resources and means. Local leaders of several political parties have been opposing this provision. They want control over local resources to be given to local communities.

The draft report prepared by Parliament’s Committee on Natural Resources and Means, which is working on drafting a constitution after Nepal’s historic Constituent Assembly election, has proposed that control over the use of all natural resources and means should be granted to local communities.

Nepal signed the International Labor Organization’s Convention No. 169 in September 2007, which requires the state to consult indigenous peoples on decisions that affect them. The country is a party of the treaty, but it has not been implemented yet, says the program coordinator of the treaty, Ramjee Congren. The government has planned construction of big drinking water and hydropower projects in rivers that could affect indigenous people living near the proposed sites. Indigenous people have been pressuring the government and protesting against its plans. But all the protest and pressure fall on deaf ears, Congren says.

“The government does not even provide any compensation,” he says. “It does not manage [an] alternative source of income either.”

According to expert Hit Kazi Gurung, who is also a lawmaker, Majhis are aboriginal inhabitants of Nepal. Displacing them from their traditional profession is like putting their existence at risk, he says.

“Since Majhis kill fish for their sustainability by casting nets, they don’t cause much harm,” he says, in comparison with more modern and invasive techniques like electrofishing, blast fishing and fishing using poison. “The local bodies shouldn’t allow private companies to run crusher industries in rivers.”

Since the ancient times, Majhis have not been able to rise above oppression and now are disappearing, says Dhan, who has been fighting for the rights of Majhis and also has written a book on their culture and tradition.

It is the first and only book that has been written on the Majhis, he says with a hint of confidence. The book was written after years of research and asserts that Majhis are at the stage of disappearing because of the invasion of people from other cultures and religions.

Dhan says that there used to be a big group of Majhis in eastern Nepal where the Koshi River is. As one of the biggest rivers in Nepal, the Koshi was rich in fish. But since 1954, the Koshi has been taken over by bridges, dams and powerhouse construction. The government decided to build a wildlife reserve near the Koshi, and, since then, thousands of Majhis have been displaced and fled to India and other parts of Nepal.

“We were treated as if our dignity was lower than that of the animals and birds that the government intended to save by building this wildlife reserve,” says Dhan, hurting over the government’s injustice to his community. “The government took control of our rights to survive.”

Still, the deep attachment to the river remains.

“If I pass even a day without fishing in the river,” Tirtha says, “I feel as [if] the day is incomplete.”