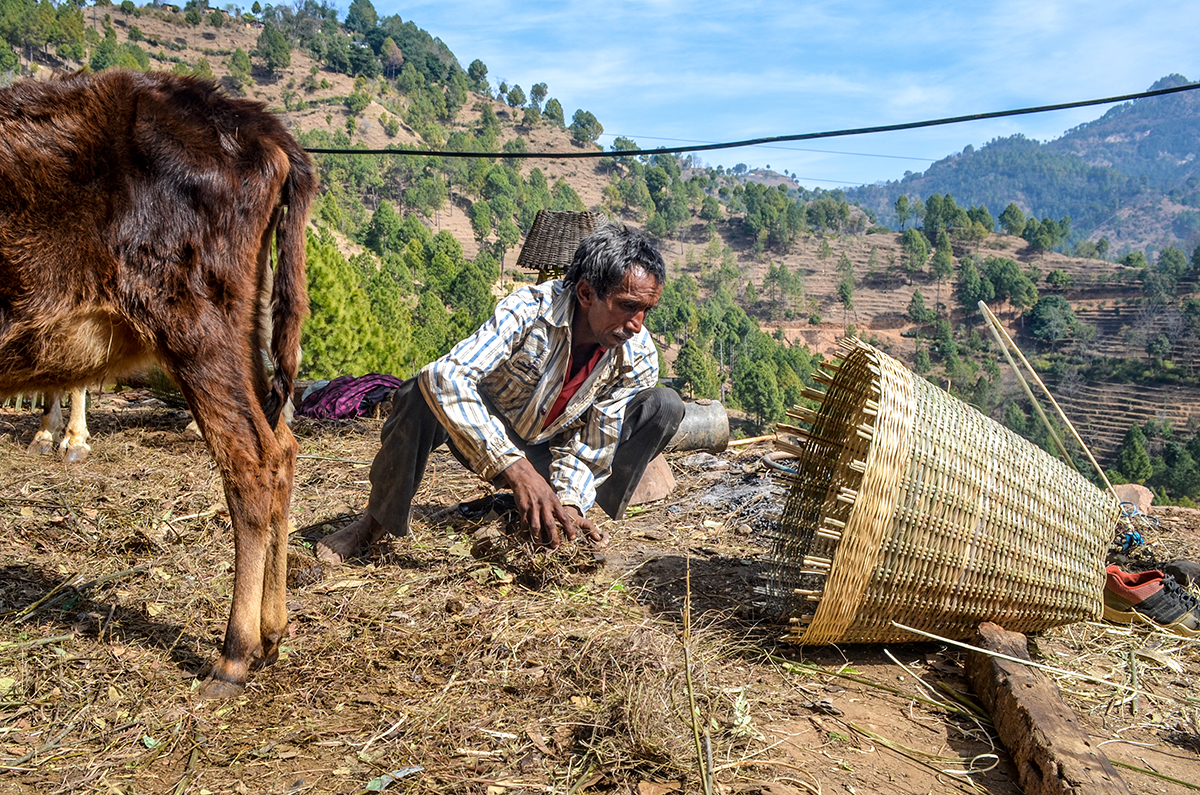 But Goreram Labad, a 44-year-old fieldworker, is still working to pay off a 40,000-rupee (about $386) loan he took from his landlord 13 years ago. The money paid for medical treatment for his son, then 2 years old, who had broken his hand when he fell from a hanging baby cradle.

Labad has been working to pay off debts since he was 15 years old, when he headed to the fields to pay off a debt of 15,000 rupees (about $145) that his father, Mane Labad, now 74, borrowed nearly 40 years ago. The family lives in Nepal’s rural Baitadi district, in the country’s far western region, where formal jobs are scarce and poverty is common.

No matter how hard he worked, Mane Labad says, he only managed to pay off interest on the loan. The principal amount never budged, he says.

“I do not know how many generations will go like this,” Mane Labad says. 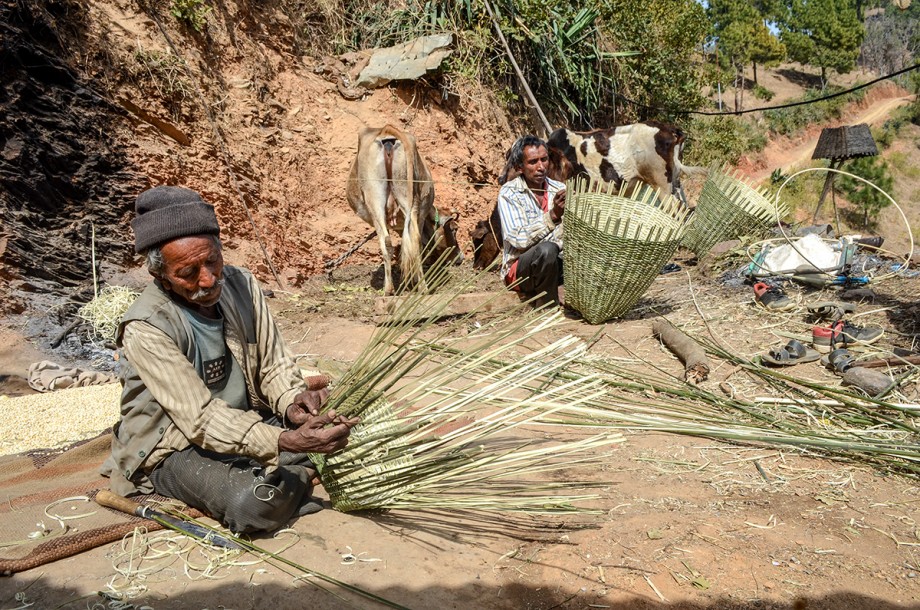 Mane Labad, 74, in foreground, works with his son, Goreram Labad, 44, to weave baskets. Both men work as indentured servants to landlords for debts they took beginning nearly 40 years ago.

Bonded laborers in Nepal are called “haliyas.” In most cases, haliyas don’t own any property and cannot grow crops or raise animals to provide for their families or sell to earn a living. To survive, they borrow money from landowners then work to pay them off, but the debts come with massive interest rates. Landlords often allow borrowers to build small homes on the land so that they can work in the fields, but rent and other costs are folded into the debts.

When the borrower can’t pay back the loan, the debt is passed down to his or her children.

First, the government asked haliya advocate organizations to provide data showing how many haliyas are in Nepal and where they live, says Gopal Giri, an undersecretary in the Ministry of Land Reform and Management.

Based on that data, the government sent out census workers in 2012 to verify the status of bonded laborers, Giri says. Nearly 17,000 people were ultimately named in a registry of haliyas in Nepal, he says. Of those, about 11,750 have received identity cards that prove that they’re no longer beholden to the landowners who lent them money.

The government has earmarked 875 million rupees (about $8.4 million) for liberated haliyas to buy land and build homes. So far, 4,139 haliyas have been “rehabilitated,” Giri says, and the government has purchased land for 812 of them. Just more than 700 have built homes and about 2,600 have repaired existing homes, he says.

Even so, it’s estimated that thousands of haliyas are still stuck in bonded labor. Labad says he participated in a protest in 2008 – one of many that occurred to raise awareness of the issue – at the urging of haliya advocacy groups, and he heard that the haliyas were legally freed from their debts. He gave his name to an official and believed that he would soon receive an identity card, but the card never arrived.

He’s not sure what to do now. His three children attend school, he says, but he can’t afford to buy supplies for them. There are many days when the family doesn’t have anything to eat.

“Where should I go? And whom to meet?” he asks, referring to government assistance. “I do not know anybody. Who cares about helping poor people?”

Giri, the undersecretary, acknowledges that some haliyas were likely left out of the government’s count, but he blames the advocacy organizations for failing to provide correct data.

There’s no immediate plan to help Labad and others who aren’t in the government’s database. Once the registered haliyas receive assistance, the government might do another count and repeat the process, Giri says.

Rajuram Bhul, chairman of the National Freed Haliya Society Federation, says the government has already taken too long. It’s been a decade since the haliyas were formally liberated, he says.

“The rehabilitation of the haliyas is moving at a snail’s pace,” Bhul says, adding that it might take 20 years for all of Nepal’s haliyas to be free.

Rajendra Singh Thapa, an officer in the Land Revenue Office for Baitadi district, says the district has 25 million rupees (about $241,235) set aside for haliyas who need money for land or homes. So far, he says, 64 families have built homes and 110 families have repaired homes.

He knows that some haliyas in the district aren’t getting the help they need, but says his hands are tied.

“We cannot provide anything except to those haliyas who are verified by the center,” he says.

Giri says the government hasn’t received any formal complaints from the haliya advocacy organizations about the number of people registered in the database.

It’s not clear whether formal complaints have been made, but haliya advocates across the board say the government’s list is egregiously inaccurate. 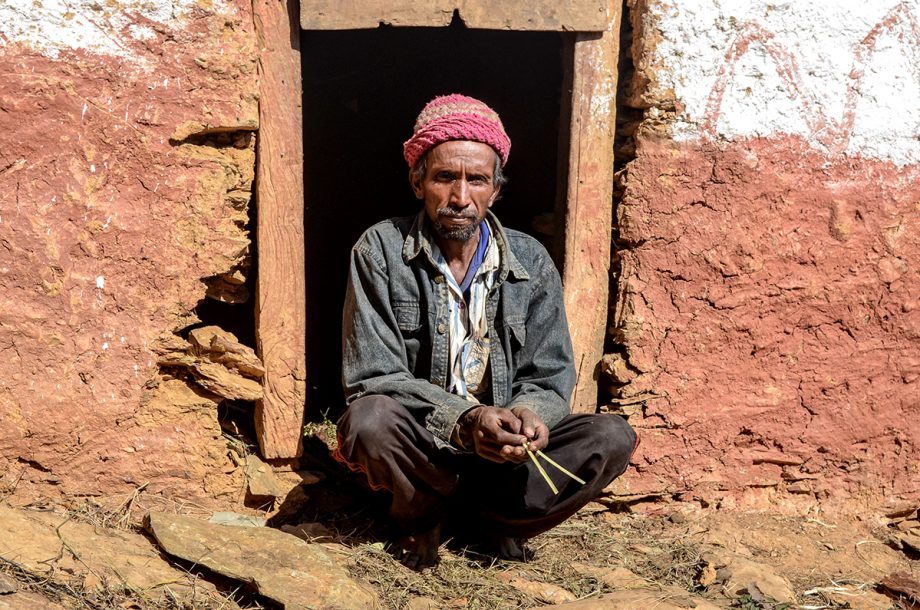 Goreram Labad sits in front of his house in Nepal's rural Baitadi district.

Bhul says the government missed an estimated 10,000 people in indentured servitude across 12 districts.

Even local district officials see the problem. Parwati Bhul, an elected official in Badilekh village in one of Baitadi district’s wards, says only four of the 80 haliya families there have received identity cards.

That’s a common scenario across Baitadi district, says Saraswati Nepali, an activist in the area. She estimates that there are nearly 5,000 unregistered haliyas in that district alone. The government’s count missed entire villages, she says.

She also worries that the government’s rehabilitation plan isn’t effective. If the families aren’t given enough land to farm for themselves, she says, they’ll likely fall back into the haliya system.

Bonded labor is a problem across the globe. In 2016, about half of the 16 million people in forced labor in the private economy were trapped in that sector because of personal debt, according to a 2017 report published by the International Labour Organization and other partners. While the largest percentage of bonded-labor cases are in Asia, there are significant numbers of indentured people in every region, the report notes.

“Earlier, they would at least get food to eat and clothes to wear from their landlord,” says Ramesh Lekhak, who says he had two people working for him under the haliya system until the government’s liberation program began.

He loaned those people 60,000 rupees (about $579), he says, but never saw a dime in return. Now, Lekhak says, those laborers don’t even have the option of such assistance.

“They are neither educated nor can they do any other work,” Lekhak says. “It would have been better if the government offered them a job.” 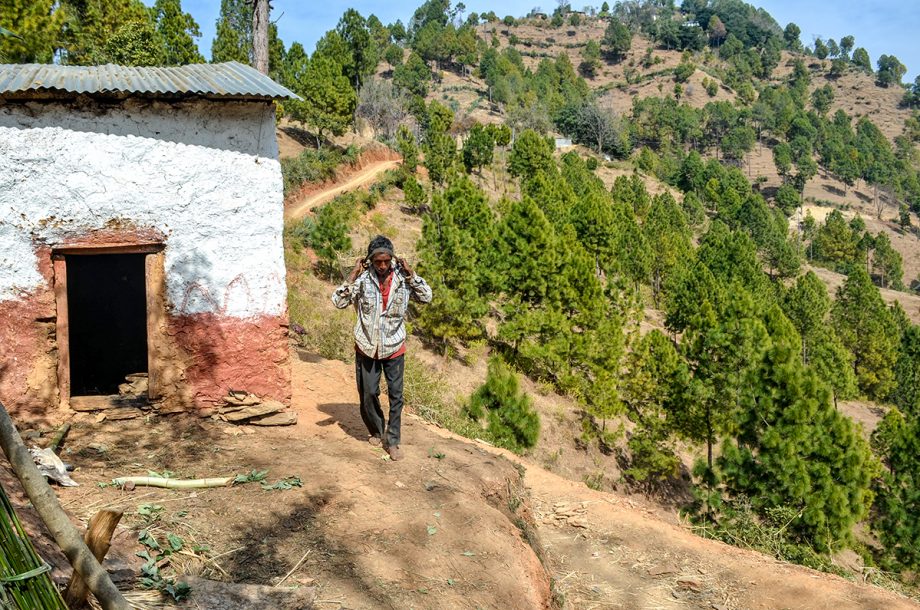 Goreram Labad carries manure in a hand-woven basket to the fields his landlord owns.

Lekhak’s description of the haliya system is a far cry from what many haliyas say actually happened.

Ishwari Bhul, 56, says he borrowed a total of 50,000 rupees (about $482) over a period of nearly 20 years from two landlords to help cover basic living costs for his family of 15 people. But even when he took the loans, he says, he knew the likelihood of paying them back was low.

“How does the person who does not even have a house repay the loans?” he asks.

Bhul says he’s still working to pay off those debts. Someone working on the haliya liberation effort once took his name, ostensibly to add it to the database, but he says nothing’s happened since then, so he continues to make payments on the interest of those loans.

Bhul has asthma, but the landlords still expect him to pay interest on his loans. His debts are already being passed to the next generation. He says he stays home when he’s too ill to work.

In his place, he says, his sons work in the fields.