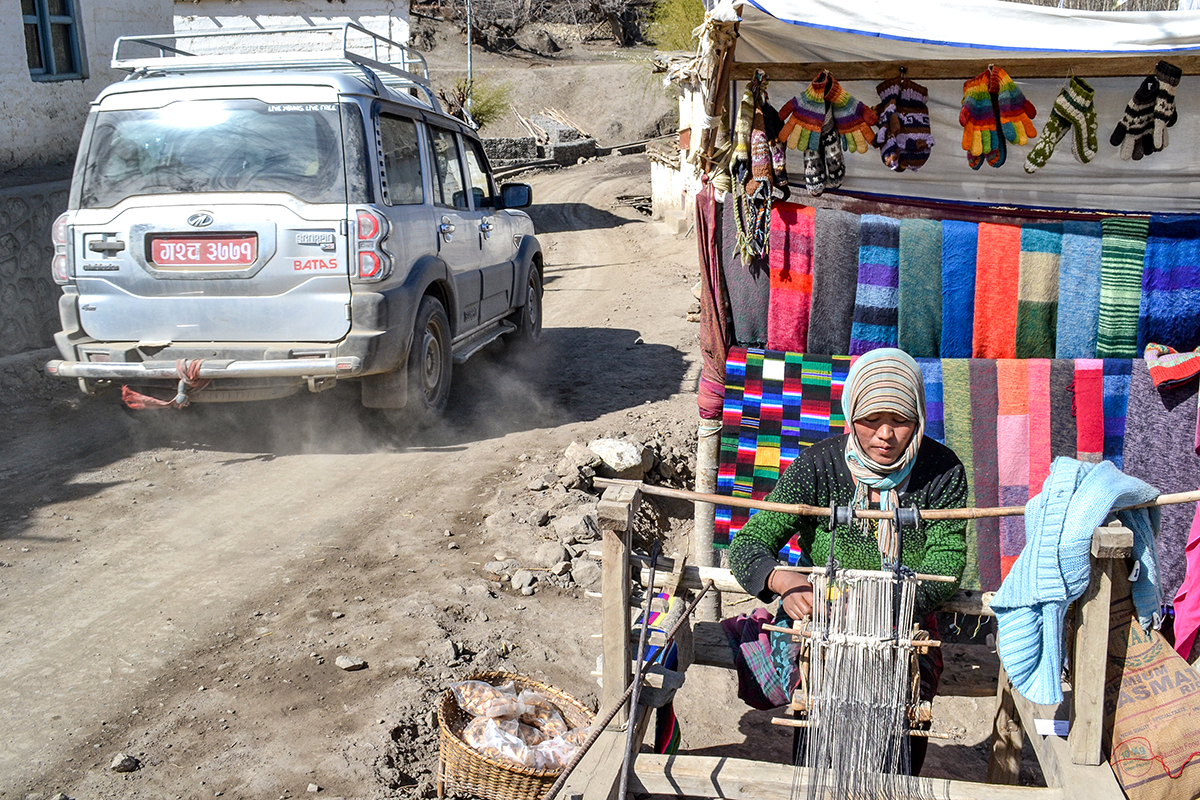 KHINGA, NEPAL — Trekkers who hike through the lower Mustang district in this Himalayan country seek spectacular views and isolated temples.

Along the way, Tshering Bhuti Gurung hopes they buy her colorful handwoven shawls and homegrown apples. Her stall sits next to the road, a key trekking route through the region.

“Come and buy,” Gurung says to passing trekkers, holding a scarf over her head and face to guard against the scorching sun and constant dust.

But there are far fewer trekkers these days than in past years. Now vehicles speed past, sending dust into both her stall and the crevices of her skin. 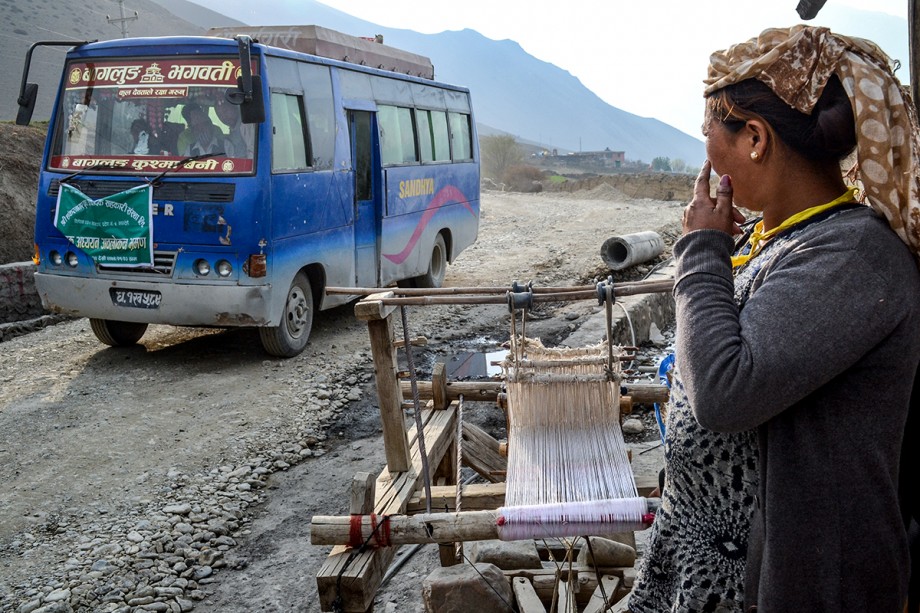 Tashi Wangmo Gurung stands outside her hotel in Khinga.

A 12-kilometer (7.5-mile) stretch of road between Kagbeni, a town that is the end point of the main road that connects to major cities, and Muktinath, home to a numerous Buddhist and Hindu pilgrimage sites and temples, is being widened and covered with blacktop.

Instead of a potholed, 4-foot-wide path best suited for hikers, traders leading donkeys, or rugged four-wheel-drive vehicles, the road will soon be a smooth surface for vehicles quickly carrying adventurers to destinations that otherwise took hours to reach by foot.

Tourism and trekking, in particular, have increased exponentially in Nepal in recent years. According to government data published in 2014, the most recent year for which the data is available, 3,760 trekkers visited the country in 2000. By 2013, there were 12,937 trekkers, 2,862 of which went to the Mustang district.

Farmers welcome the road development between Kagbeni and Muktinath because their products will reach the markets sooner and life’s necessities will be more accessible.

But people such as Gurung, who built livelihoods around the slow, steady flow of tourists on foot, say their businesses have all but collapsed.

Construction on the road began in 2016. It’s expected to be completed by October. When finished, the road will be the first blacktopped road in the Mustang district. 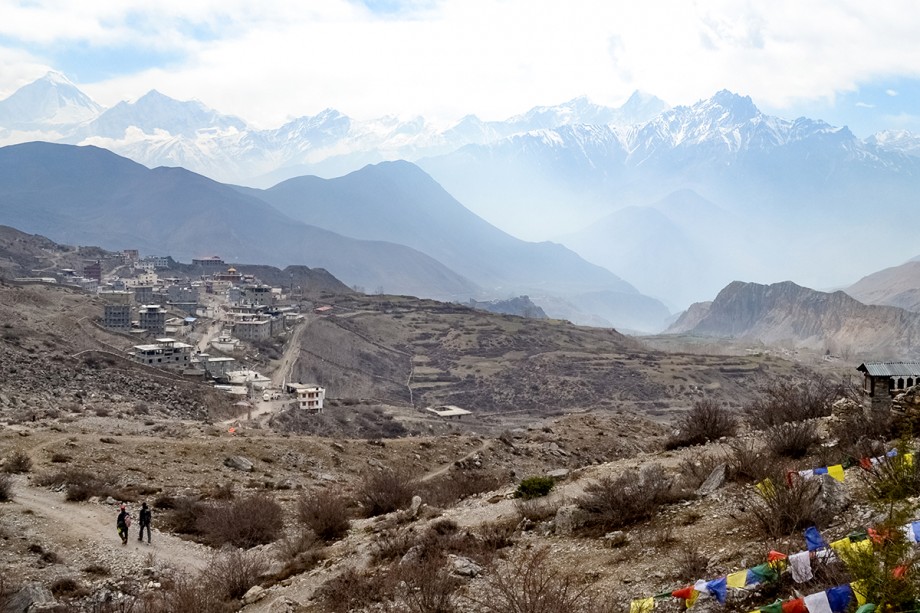 The infrastructure project, which began in 2016, will turn a trekking route into a paved road, attracting vehicles instead of hikers.

The road solves some problems, including access to markets and services for local people, says Nar Bahadur Lama, a tourism entrepreneur and adviser for the Great Himalaya Trail, a network of trails that move through Nepal, Bhutan, India, Pakistan and China’s Tibet region.

Plus, he adds, an easily driveable road will likely attract even more tourists.

But with the road’s upgrade, a piece of the traditional mountain economy is lost.

Trekkers are an important source of income in the area, Lama says. Tea shops, hotels and souvenir stands that line the road are suffering now as trekkers opt to hop into vehicles to take day trips to Muktinath and other spots rather than go by foot. There is an alternate trail that trekkers will still be able to take from Kagbeni to Muktinath, but that trail doesn’t go through Khinga, Jharkot and other villages that rely heavily on tourism.

The road isn’t quite done, but people in Khinga say they’re already noticing a change.

“Trekkers would walk and spend the night here,” Tshering Gurung says. “But now because of the roads, vehicles take people to their destinations in no time. No one stops to stay in the hotel.”

The road, once completed, will be the first blacktopped road in Mustang district, a favored destination for trekkers.

Gurung’s stall is also suffering. At one time, she says, she sold one or two items each day. Now, she only sells that many in a week. People speed right by in their vehicles, she says.

But other local people are more optimistic. More tourists will come to the area once the road is completed, says Serkyini Gurung, who runs a hotel, souvenir stand and apple orchard with her family.

“Life has become more convenient for people,” she says. “Traveling will get easy. Basic necessities and food supplies will be readily available and cheaper.”

Palgen Gurung runs a hotel in Jharkot, a village along the road. He welcomes the change, noting that such construction in the past has improved life across the board.

Years ago, he says, it took a week to reach Pokhara, the nearest major city. But then a road was built to connect Pokhara with Kagbeni.

“Now, you can reach Pokhara in a day,” he says.

And while foot trekkers are choosing more-rural routes these days, the paved road attracts bicyclists, he says.

For local people, Palgen Gurung says, life will be much easier.

“Apples can be easily transported to the place where they can sell,” he says. “There will be no waste.” 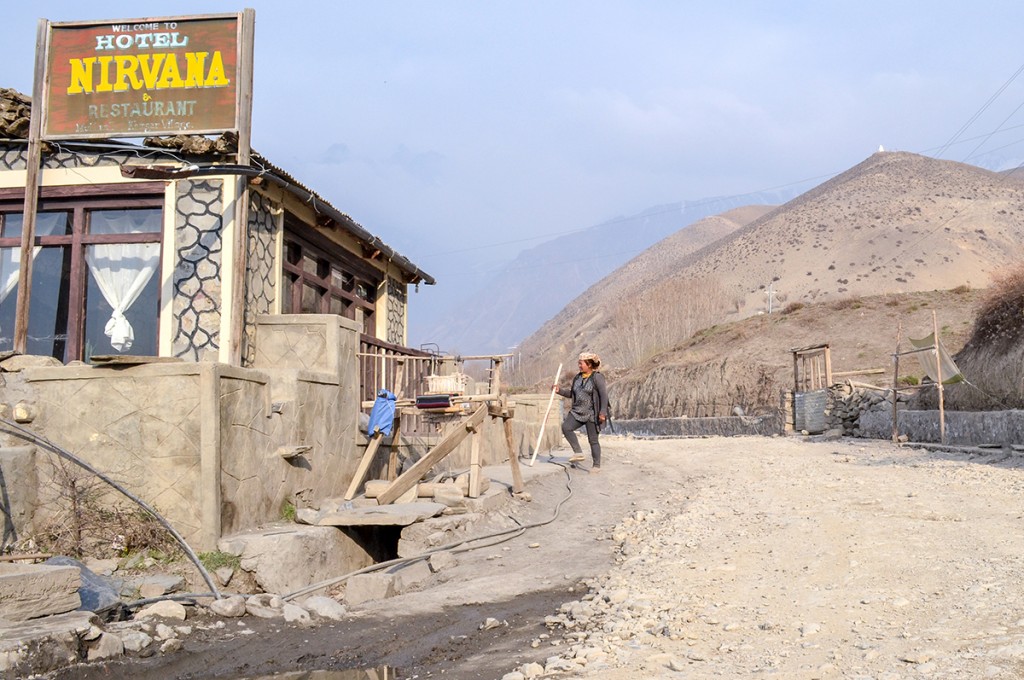 Tashi Wangmo Gurung stands outside her hotel in Khinga. 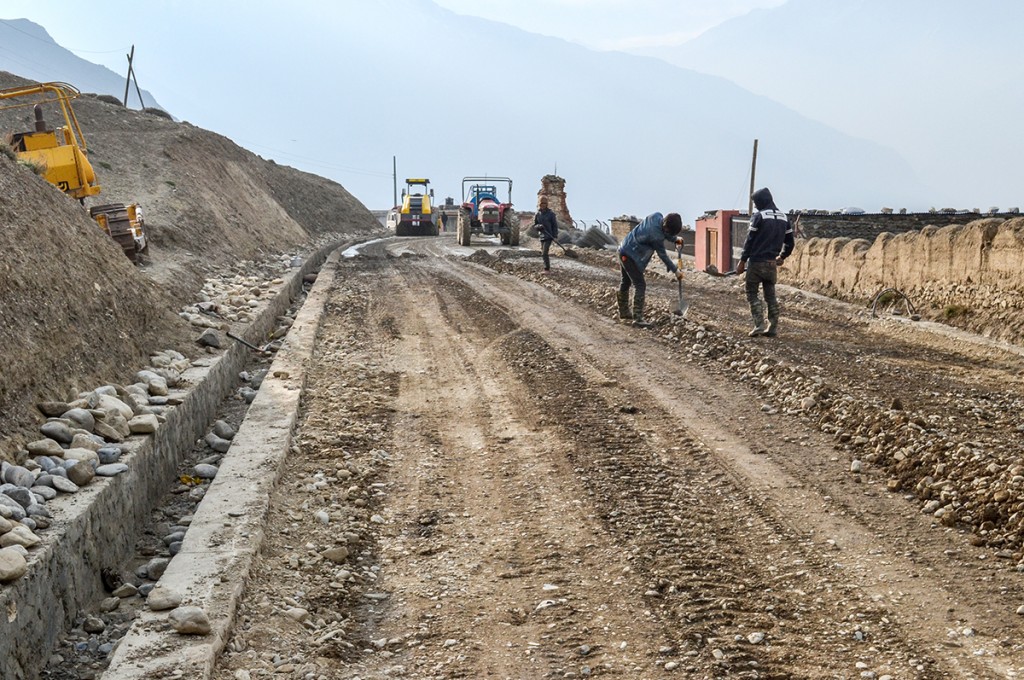 Workers expand the road in Khinga, a tiny village located on the road between Kagbeni and Muktinath. 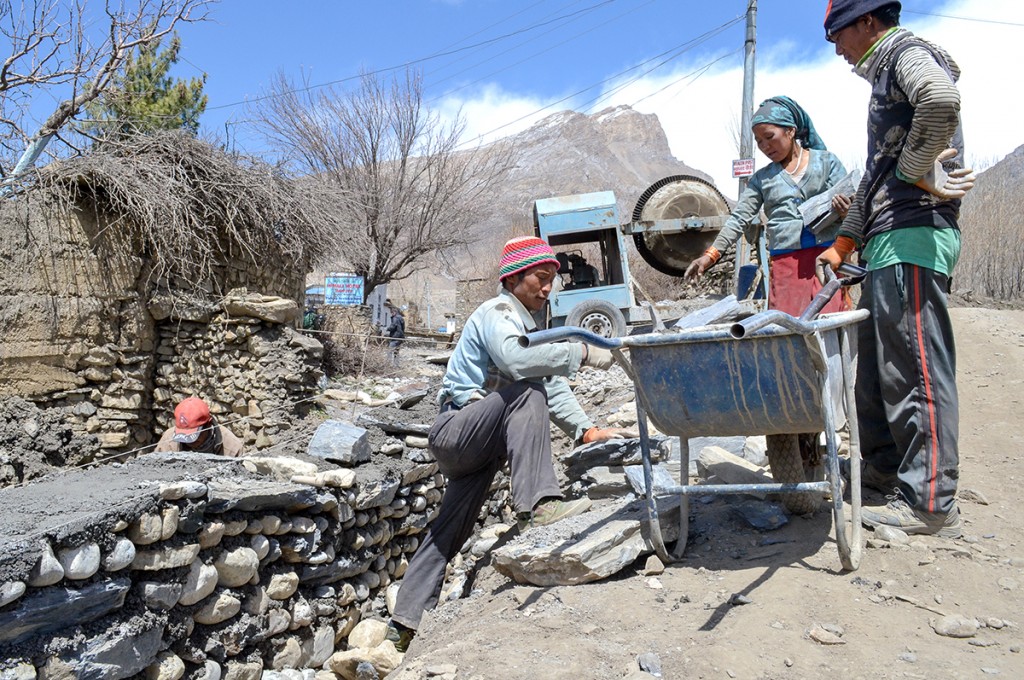 Workers in the village of Jharkot in the remote Mustang district in Nepal work to expand and construct walls on the road from Kagbeni to Muktinath. 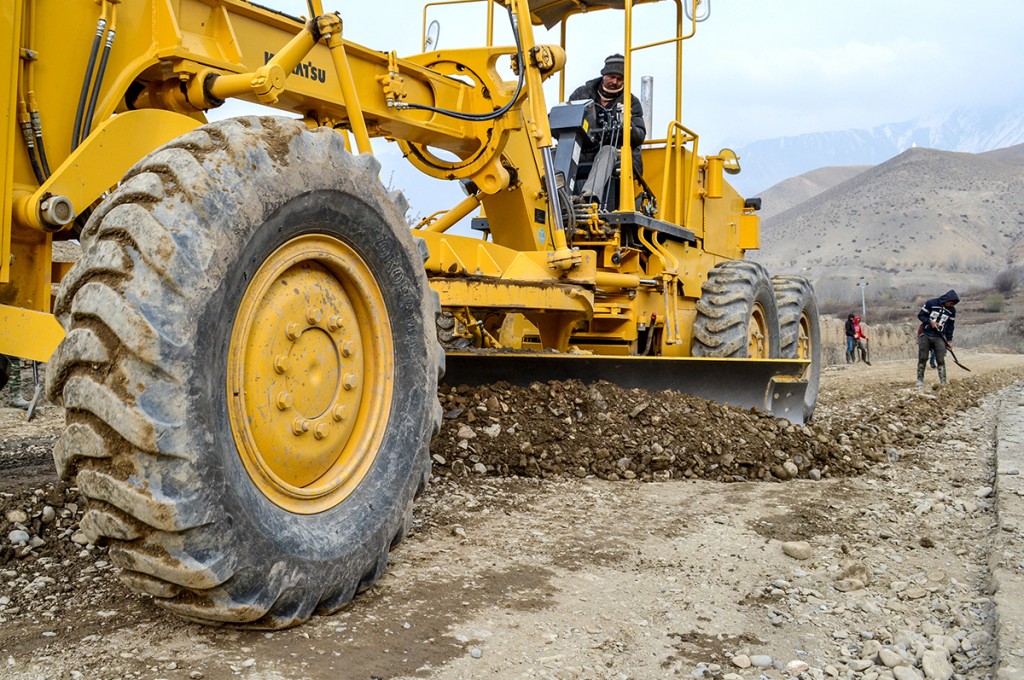 Laborers prepare a road in Khinga for paving with blacktop. 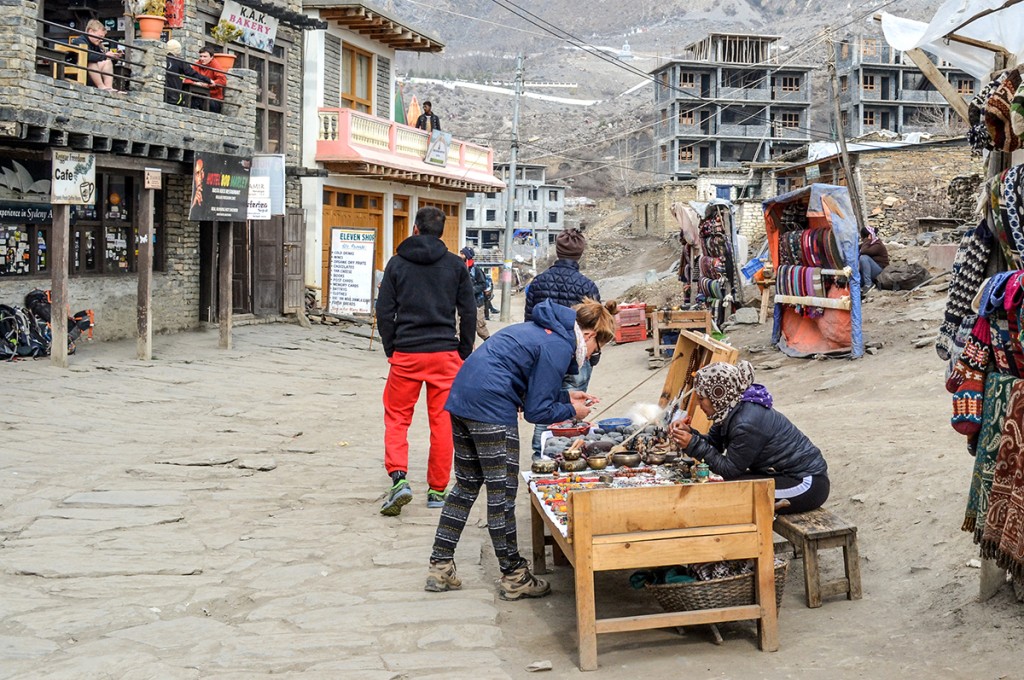 People stop by souvenir shops at a market in Muktinath, a town in Nepal’s Mustang district.

EDITOR’S NOTE: Gurung is a common surname in the villages. None of the sources are immediately related.