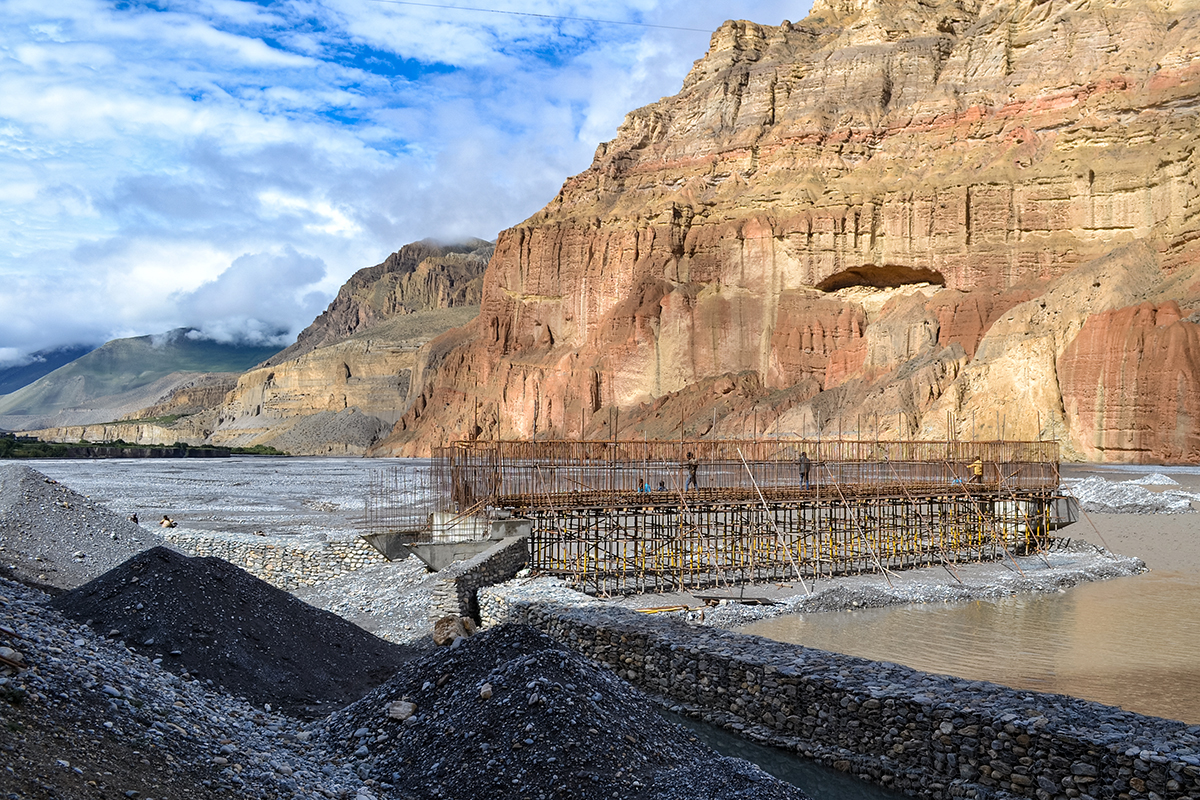 TANGBE, NEPAL — Here, in one of the most isolated parts of the world, narrow paths stand in for roads, and mules replace motor vehicles.

The elevation ranges from about 1,600 meters to nearly 7,000 meters (about 5,249 to 22,965 feet) above sea level, making it among the highest regions in the world where people live year-round. For the most part, the land is protected from human impact, but that means those who call this place home must sustain themselves.

That could soon change. Construction is underway on a 296-kilometer (183-mile) road that will stretch from Beni to Kora La, a desolate border marker that divides Nepal and China. The road will be paved from Beni to Jomsom, and the 110-kilometer (68-mile) remainder will be gravel, connecting existing paths that are sometimes used by adventurous drivers but are largely considered unfit for vehicles. 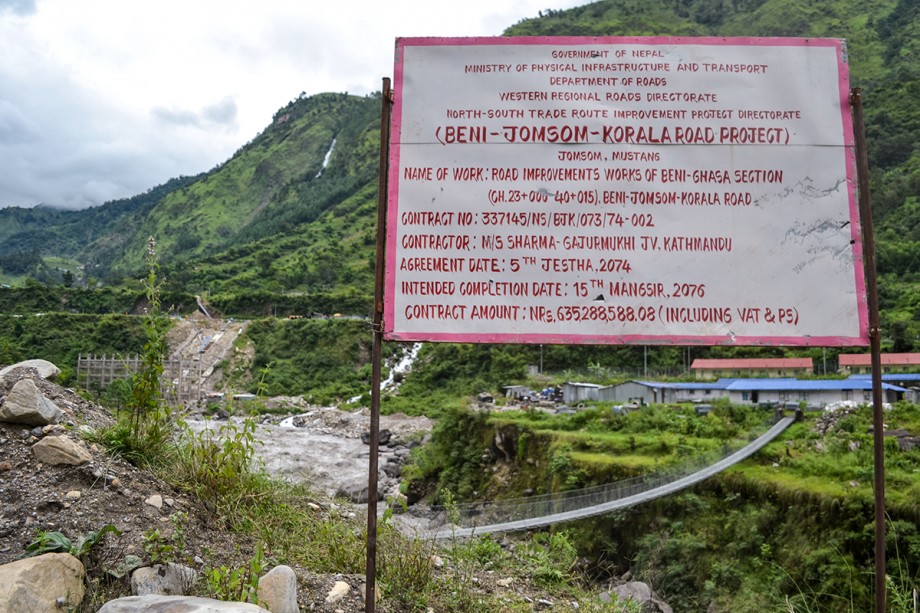 A sign in Nepal’s Mustang region provides information about a road that will connect the country with China.

Kora La stands at 4,612 meters (more than 15,100 feet) above sea level, but it’s considered one of the lowest drivable points between the two countries.

Started in 2016 and expected to be completed by 2020, the project will cost approximately 5.9 billion Nepalese rupees ($52 million). Once it’s finished, people here will have access to an entire region in China.

But more immediately, the road is providing jobs. Residents here depend mostly on tourism, including hotels and restaurants, to earn money, and construction workers are scarce, says Angmo Gurung, a Mustang resident who runs a hotel with her husband.

When 1,200 construction jobs opened up, people came from miles around to work.

Kumari Roka Magar was among them. She carries rocks and cement on her head to the construction site.

She says her family, including her husband and two children, came with more than 100 people from Rolpa district, east of the Mustang region and about 650 kilometers (about 400 miles) away. The journey, via public transportation, took five days, she says.

“There are no job opportunities in Rolpa,” Magar explains. 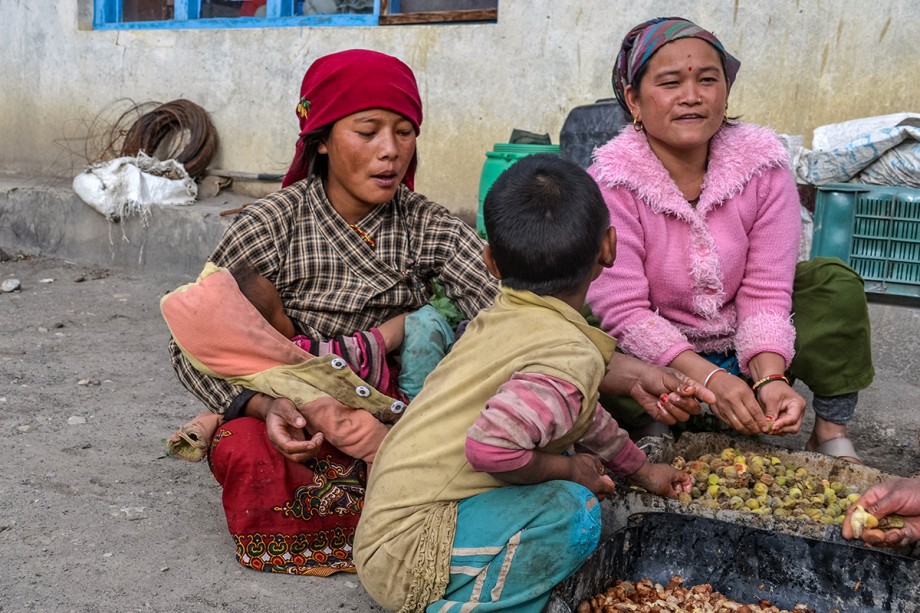 Kumari Roka Magar, in red, takes a break from her work at a road construction site to feed her daughter. Magar is among a group who came to the Mustang region to work on the road.

Bishal Roka Magar also came to Mustang from Rolpa district with his wife.

“Laborers come to work here because they get better wages than other places,” he says.

Construction work on the road is arduous, says Mukti Gautam, a Kathmandu-based official in the Ministry of Physical Infrastructure & Transport. Landslides frequently stall work, he says. Construction materials, fuel and even food have to be transported to the region from other areas, he adds, and laborers suffer from altitude sickness.

But the need for the road is great.

“Nepal, being a landlocked country, cannot depend only on one country,” Gautam says, referring to India, Nepal’s primary trading partner. “We have to connect with other countries for our economy.” 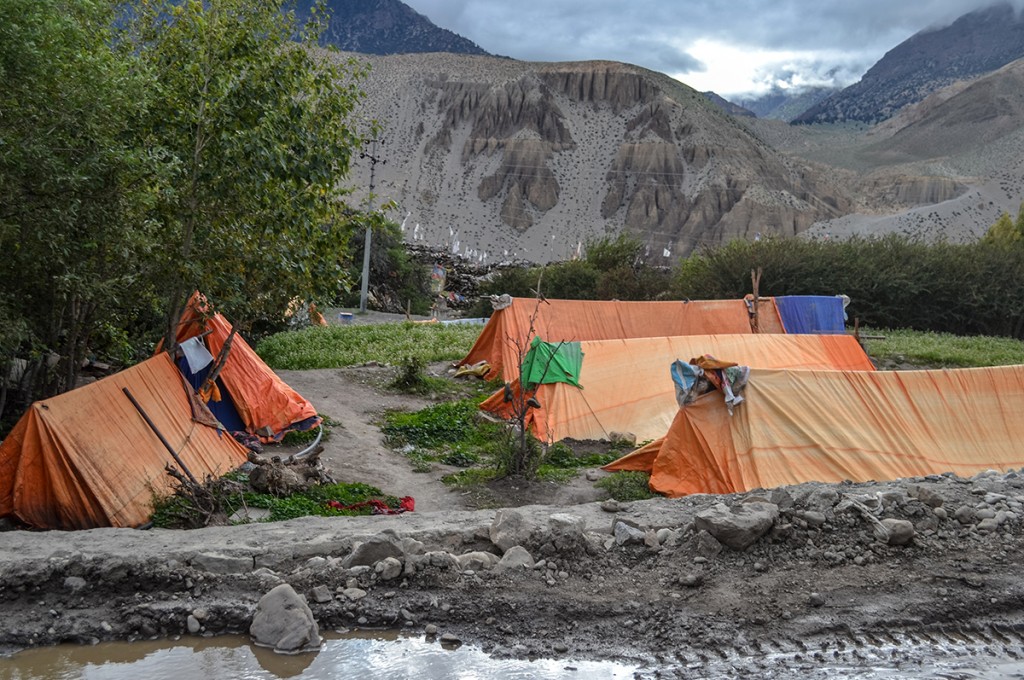 People working on the road that will connect Nepal with China through the Mustang region live in tents. Few in the Mustang region have the skills needed to get jobs at the construction site, so most of the workers came from other regions. 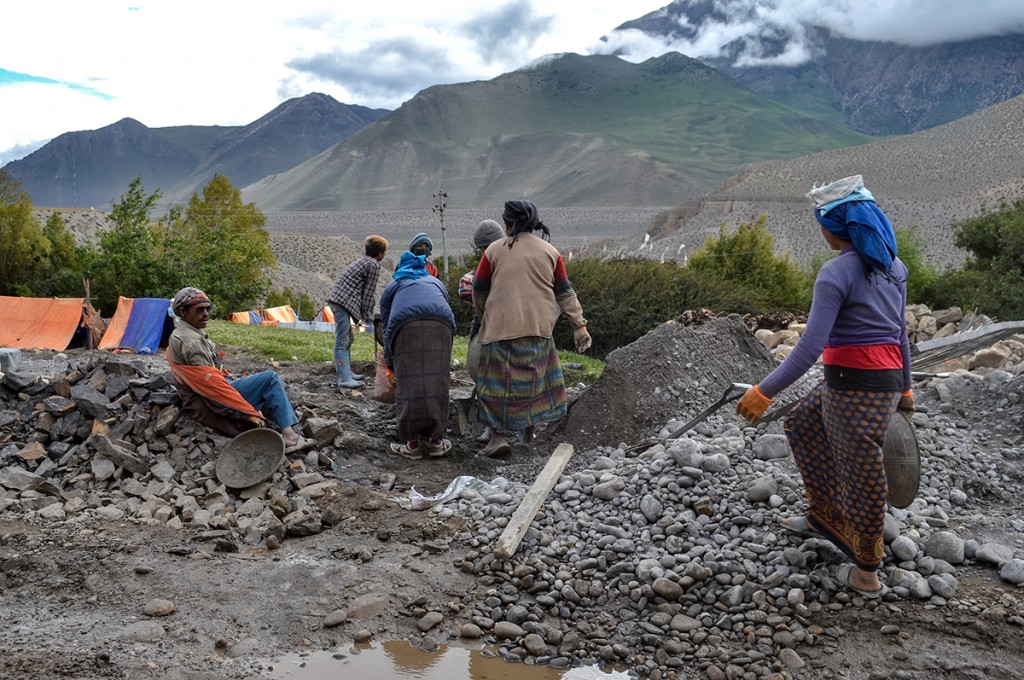 Much of the construction on the road that will connect Nepal and China, via the Kora La border post, is done by hand. 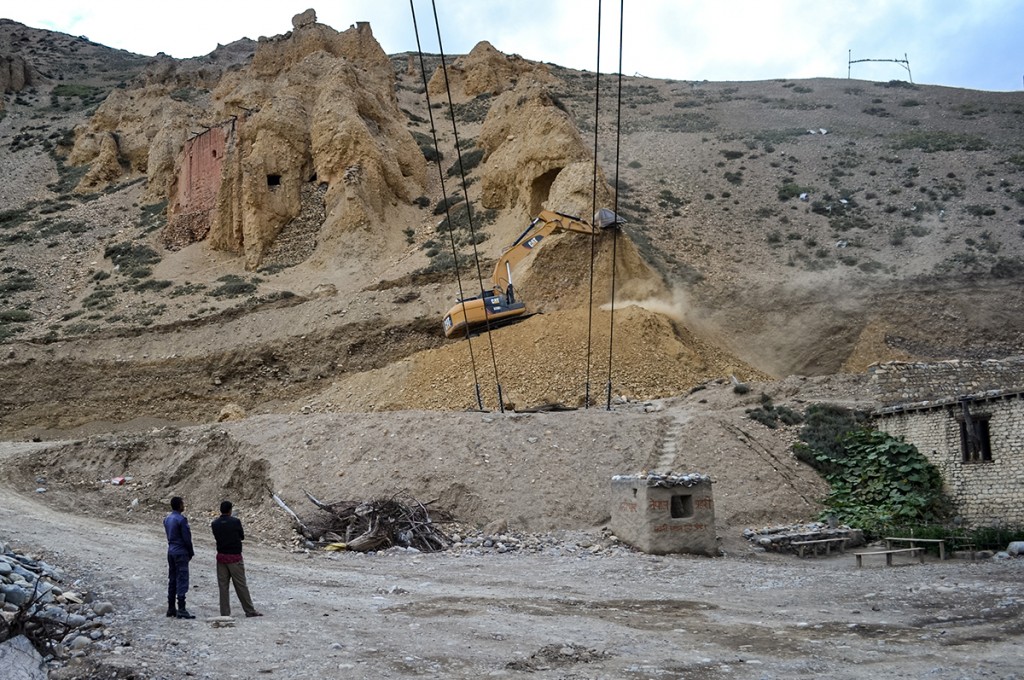 The existing path that ends at the Kora La pass is only suitable for donkeys and other traditional forms of transport. The new road will make it easier to drive directly to China. 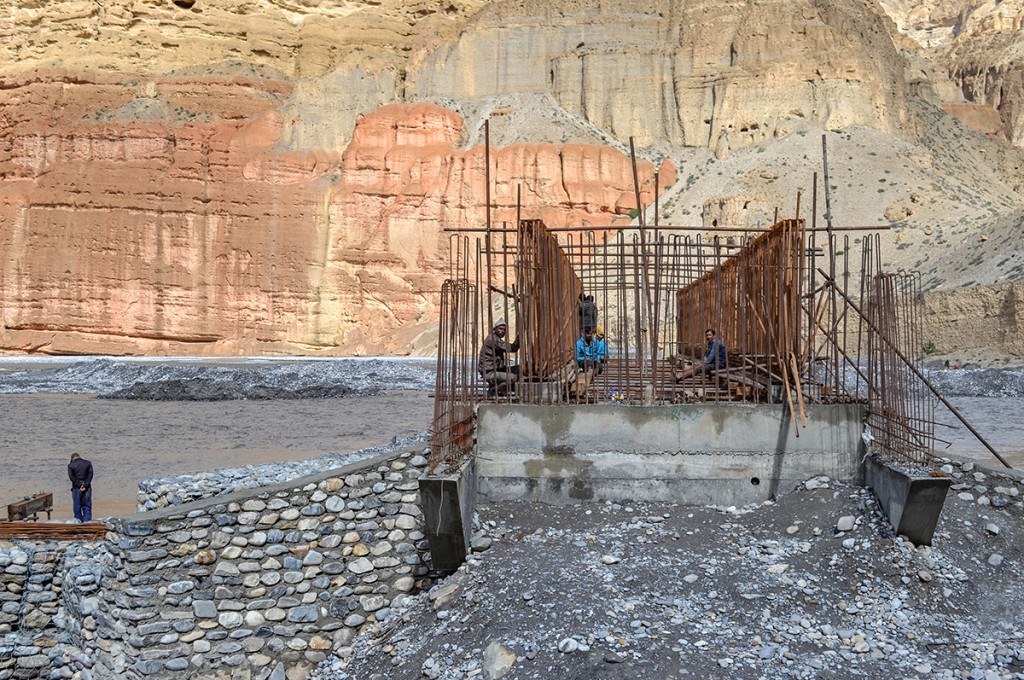 The road that is currently under construction, shown here, will end at Kora La, which stands at more than 4,600 meters (15,091 feet) above sea level but is considered one of the lowest drivable points between China and Nepal. 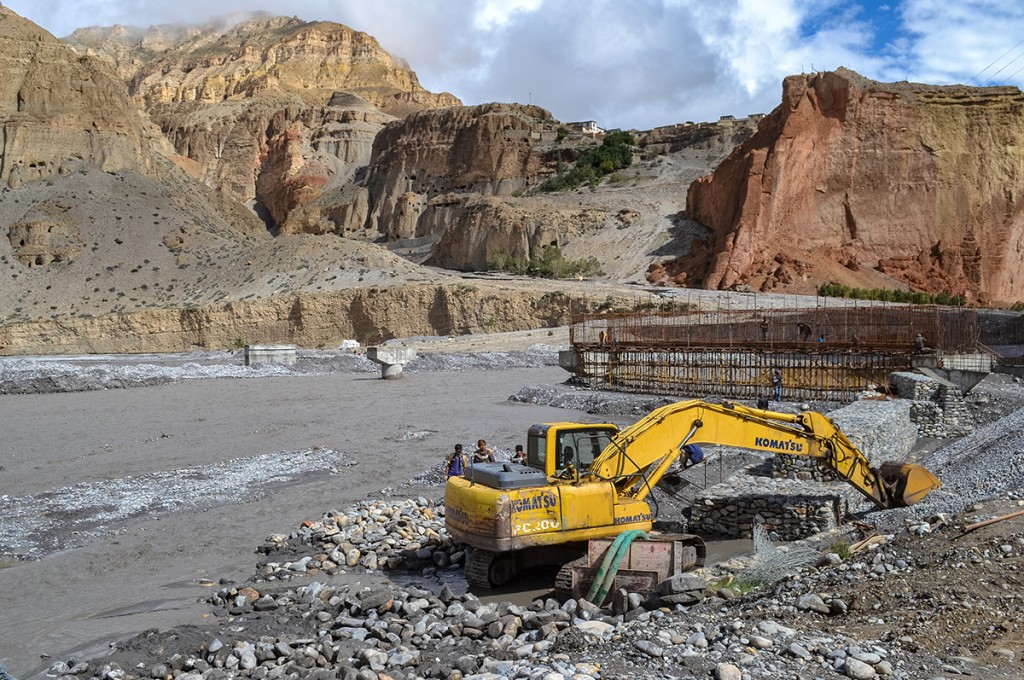 Most of Nepal’s trade is with India, but improved road access to China could help the landlocked country expand economic partnerships. 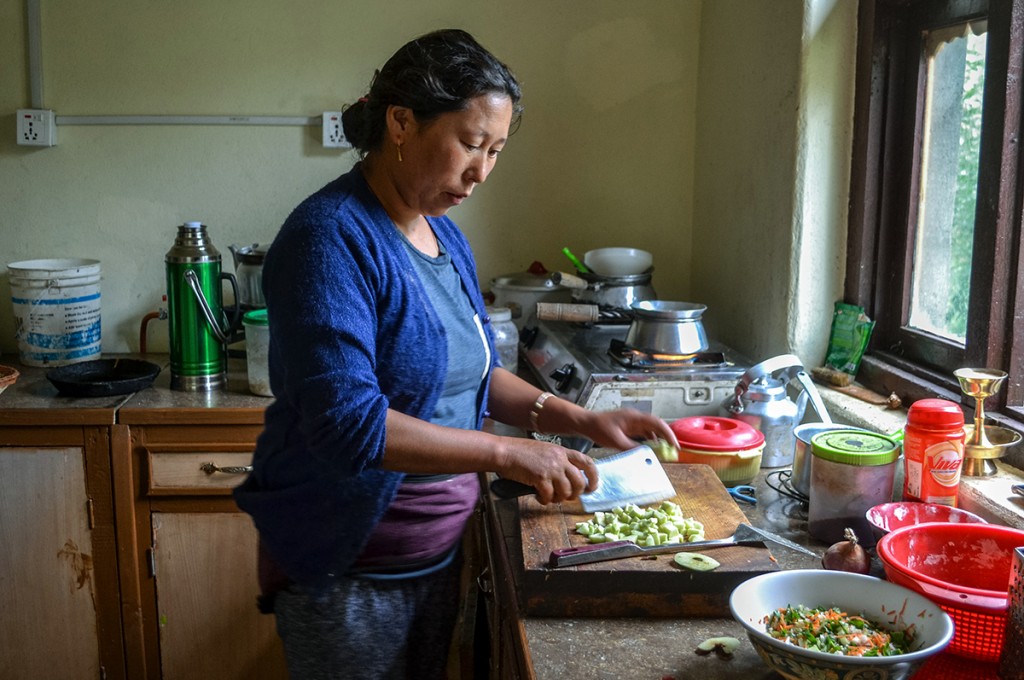 Angmo Gurung works at a hotel in Nepal’s Mustang region. Most people in the area who have formal jobs work in the tourism industry.