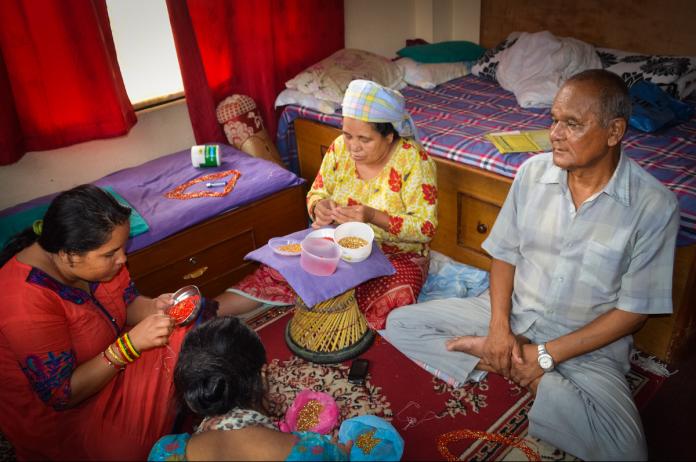 KATHMANDU, NEPAL – On a sunny day last November, Shiva Bahadur Khadka stood with some 200 people outside the gates of the Department of Cooperatives in Kathmandu, Nepal’s capital, chanting, “Give us our money back!”

Khadka, 65, clutched documents that prove he had deposited his money with a cooperative society. Like the rest of the crowd, he sought to recoup some of the precious savings he had lost to a mismanaged financial institution.

Thousands of Nepalese wage earners have lost their deposits in the failures of savings and credit cooperatives, which have become a popular means of pooling investment funds and sharing profits.

Khadka worked as a waiter at the Hotel Yak and Yeti, a five-star hotel in Kathmandu, for over 40 years, he says. He saved enough money to buy a small plot of land in the Kathmandu Valley, but he had no money to build a house on it.

On the advice of friends, he sold his land and invested 2 million rupees ($20,000) with Oriental Cooperative Limited in Kathmandu in 2010 at an interest rate of 16.5 percent a year.

At the time, commercial banks in Kathmandu were offering interest of only 8 percent a year.

Oriental Cooperative Limited is no longer in operation, says Thakur Parajuli, the former manager of the cooperative.

Basnet is under investigation for fraud.

Many hundreds of depositors are suffering a similar fate, Khadka says.

“I have heard that some of the people who lost their money had mental breakdown, heart attack and some had even committed suicide,” he says. “I am also suffering from hypertension, as I lost my entire savings. I do not have money to even consult a doctor for high blood pressure.”

Cooperatives have historically provided a secure way for lower-income Nepalese to save their earnings at a healthy rate of deposit and obtain credit at reasonable rates. They are member-owned and democratically operated.

Poor investments, lack of government regulation and monitoring, and fraudulent acts by managers have undermined cooperatives, causing hundreds of them to close down since 2002, wiping out the savings of depositors such as Khadka. Depositors are demanding that government agencies intervene and ensure that their money is returned to them.

In March, the Nepal Assembly will consider proposed legislation that would strengthen regulation and monitoring of cooperatives and establish penalties for fraud in the sector.

Assets of more than 10 billion rupees ($100 million) are at risk, says Bishnu Hari Paudel, registrar and joint secretary of the Department of Cooperatives, which is under the Ministry of Cooperatives and Poverty Alleviation.

About 13,000 Nepalese citizens have deposited those funds in some 150 cooperatives that were verging on bankruptcy as of November 2014, the most recent month for which data is available.

Incidents of fraud at cooperative societies were first reported in 2002, says Sudarshan Prasad Dhakal, who was registrar of the department until November 2011.

“After 2002, the number of cooperatives has increased, and depositors’ complaints have also increased,” Dhakal says in a phone interview.

Cooperatives started in Nepal in 1957, says Pashupati Prasad Ghimire, a chief officer in the Kathmandu branch of the Division Cooperatives Office, an arm of the Ministry of Cooperatives and Poverty Alleviation responsible for overseeing cooperatives and reporting fraud.

The government established 13 cooperatives and began monitoring their activities. Decades later, as the government introduced more liberal economic policies, it made cooperatives independent and autonomous under the Cooperatives Act of 1992.

The number of registered cooperatives mushroomed from about 800 in 1992 to more than 29,500 in December 2014, Paudel says. Depositors have filed more and more complaints of fraud and mismanagement over the past decade.

In October 2013, the Council of Ministers formed a high-level, three-member commission to investigate depositors’ allegations. Using the commission’s findings, the Department of Cooperatives has drawn up proposed revisions to the Cooperatives Act. The proposals are pending before the Constituent Assembly of Nepal.

The commission found that depositors’ widespread ignorance of the rules governing cooperatives made it easier for the operators to cheat, says Shridhar Gautam, secretary of the Ministry of Cooperatives and Poverty Alleviation.

Poor decisions and unethical conduct have undermined the cooperatives, according to a report published by the Department of Cooperatives in January 2014. Operators have approved loans without collateral, provided loans to the relatives of cooperative managers, and invested funds in unproductive sectors.

Cooperatives also were hit hard by the global recession. They invested much of their assets in real estate before the Nepalese market began a steep decline in 2009.

The government neither limits rates of return nor insures deposits.

“Lured by the high interest rates on deposits, the depositors put their money in cooperatives, forgetting the reliability and financial prospects of the cooperative,” Paudel says.

Thousands of Nepalese have lost their savings to failed cooperatives.

Hindu ascetic Ratna Devi Ghimire, 85, has saved a portion of the donations she has received over the more than 50 years she has lived at the Badri Narayan Temple in Kathmandu.

In 2008, she deposited her entire savings of 300,000 rupees ($3,000) in Axim Saving and Credit Cooperative, planning to use the interest to cover her health care needs in her old age.

In 2012, by which time her account record indicated she had about 700,000 rupees ($7,000), Ratna Devi Ghimire found that all money in the cooperative had been lost due to fraud, she says.

Under Nepalese law, fraud applies to misuse of funds as well as theft by deception.

“I may not get my capital back, let alone the interest,” she says, adding that she has no other money.

The cooperative made bad investment decisions that led to the breakdown of the company, says Shreekumar Shrestha, secretary of Axim Saving and Credit Cooperative.

Chitra Kumari Subbha, the senior manager of the General Administration and Finance Department of the federation, faults the Department of Cooperatives as well as the division.

“The Cooperative Department provides the affiliation for new organizations and also has the authority to monitor it,” Subbha says. “But even when depositors have lost billions of rupees, the department and the division are trying to escape from their responsibilities.”

“There is a lack of both law and resources,” he says. “We accept that there are problems in cooperatives.”

Because the Cooperatives Act does not specify penalties for fraud in the sector, the memberships of cooperatives must choose their own course of action, Pashupati Prasad Ghimire says.

However, Nepal’s Country Code establishes fines and prison terms for fraudulent activity in general. The police use this law to investigate allegations of fraud in cooperatives.

But owners of cooperatives are rarely punished, says economist Chiranjibi Nepal, a financial adviser to the country’s prime minister.

“The operators of the cooperatives have pull,” Nepal says. “Therefore, they are not punished. Politicization of the cooperatives and sanctuary under the powerful people make it easy for the fraudsters to escape penalty. The general citizens are the ones facing the problem.”

Acting on depositors’ reports, police arrested Sudhir Basnet, the former chairman of Oriental Cooperative, on fraud charges in January 2013, Bhattarai says. Basnet is out on bail of 400,000 rupees ($4,000).

Additionally, more than 100 people involved in cooperative fraud in Kathmandu district were arrested from October 2013 to November 2014, he says.

All cooperatives are not the same. Most are solvent and honorably managed.

However, fraudulent activity by a few cooperatives has tarnished the reputation of the entire sector, Nepal says.

Credit and savings cooperatives have played an important role in the nation’s development, he says. In agricultural societies, in which many workers earn a daily wage, cooperatives historically have offered a reliable way to save money.

They also provide loans that people of modest means can use to start or develop businesses, attend university or address family needs, Nepal says.

The government plans to step up oversight of the nation’s cooperatives. Apart from the legislation pending before the Assembly, the division plans to inspect more than 600 Kathmandu-based cooperatives this year, Pashupati Prasad Ghimire says. It also will make auditing and registration procedures more stringent.

Starting in March, the Division Cooperative Office also will introduce training programs for staff and directors of cooperatives, he says.

But for depositors like Khadka, the changes come too late.

The last time Khadka protested was Jan. 9, when about 60 depositors rallied at the Commission for the Investigation of Abuse of Authority. They don’t have plans to protest in the near future, he says.

He has lost all hope of recouping his deposits.

“I lost all my money in the cooperative,” Khadka says, emotions choking his voice. “I fear I will be homeless in my old age.”

Ratna Devi Ghimire and Pashupati Prasad Ghimire are not related.