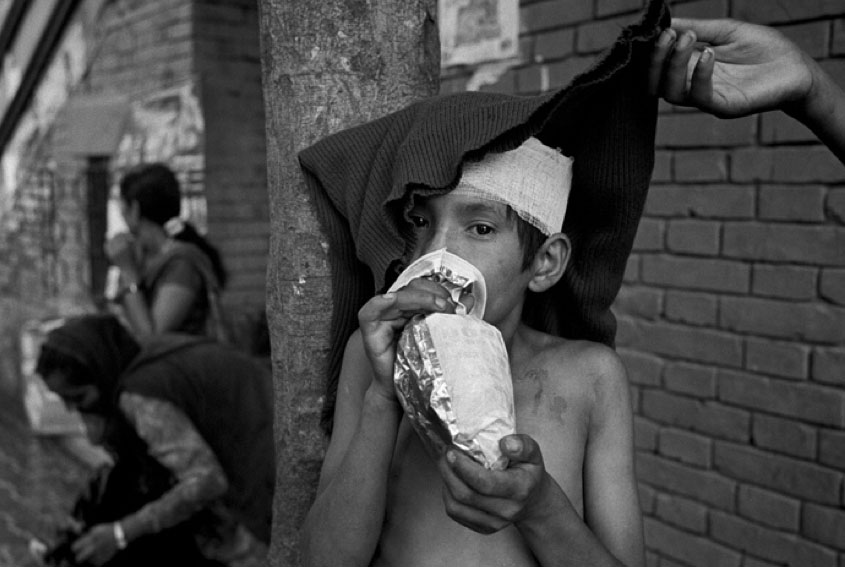 KATHMANDU, NEPAL – Sujan Satar wakes up at the crack of dawn from his open bed on the pavement of a city sidewalk in Kathmandu, Nepal’s capital, to the sounds of horns and vehicles. Today is his 15th birthday.

Skimpily dressed, Satar has tousled hair, dirt around his eyes and a blackened face. He says he hasn’t bathed in weeks, and a foul odor hangs around him. He and his six friends loiter around the famous tourist area of Boudhanath in the heart of Kathmandu, begging and rag-picking throughout the day.

In the evening, Satar collects the money earned by his gang throughout the day to buy a birthday treat for himself and his friends: glue.

“My six friends and I huddled around a bonfire and sang songs in the evening,” Satar says. “Sniffing from a dirty plastic [bag] with glue inside it was the greatest activity of our celebrations.”

During the celebration, he made a birthday wish: to celebrate his birthday next year just like this, in “glue-sniffing style.”

Satar left his hometown in Jhapa, located in eastern Nepal, when he was just 7.

“When my father died, our family lost its sole breadwinner,” he says. “We lived from hand to mouth and struggled for survival. In the face of poverty, I couldn’t receive education, then I became [a] wanderer. My mother often used to beat me for idling away time. With frustration, I left home.”

Satar came to Kathmandu and started befriending other children.

“Within six years, I [became] the leader of a group of seven street children,” he says proudly.

The Satar gang saunters around the streets of Chabahil, an historical area of Kathmandu, collecting plastic bags to eke out a living.

“I am the eldest member of our gang and feel happy to be its leader,” he says. “I don’t toil hard all day. My followers earn and dole out some money to me. We need money because we have to sniff glue.”

Satar says he first tried sniffing glue the year he arrived in Kathmandu. Sniffing glue, or “dendrite,” as it’s known, helps kill hunger pangs and numb them to the biting winter cold, his new friends had told him.

With poverty and unemployment rising in Nepal, more children end up living on the streets. In addition to being homeless, many of them have become addicted to glue sniffing, which makes them high, making it easier to cope with hunger and the cold winter season. Although rehabilitation centers do exist, many children do not want go because they will have to give up their addiction. The government intended to launch a plan to get children off the streets last October but has not moved forward because of budgetary issues.

Nepal has seen an increase in unemployment from 42 percent to 46 percent from 2004 to 2008. In an August 2010 report that warned of a “lost generation,” the International Labor Organization announced that the global youth unemployment rate had hit its highest recorded level. South Asia, the sub-region that includes Nepal, recorded 15.3 million youths unemployed at the end of 2009, the highest of any other subregion in Asia.

The Central Child Welfare Board estimates the number of children on the streets under the age of 16 in Nepal to be 1,500. But according to research conducted by Child Workers in Nepal, CWIN, one of the leading organizations working for children’s rights in Nepal, Satar is one of 5,000 children on streets in the country. Among these children, 95 percent are addicted to glue sniffing, says child specialist Dr. Sailendra Acharya.

“The adhesive glue contains toluene, a sweet-smelling and intoxicating hydrocarbon, which is neurotoxic,” Acharya says. “The solvent dissolves the membrane of the brain cells and causes hallucinations, as well as dampening hunger pangs, and wards off cold, which is very dangerous for the children.”

Because of these effects, glue sniffing has become an epidemic among children on the streets in Nepal, who say they hail mostly from rural areas. Kathmandu is home to many of them who fled their homes because of family problems, poverty, abandonment, and a lack of education, food and security, they say. Many children take refuge in a drug-addicted haze on the streets of the capital city and other towns, such as Pokhara, Biratnagar and Nepalgunj.

While Satar looks forward to glue sniffing year-round, Khem Bahadur Basnet of another gang of children regrets trying glue in his early days on Kathmandu’s streets.

“Now I am addicted to glue sniffing,” he says. “I cannot live without it even for a single day.”

Basnet came to Kathmandu to pursue his education. After failing and repeating fifth grade twice in Sindhupalchowk, Basnet ran away from home and came to Thamel, another tourist area in Kathmandu.

“I never wanted to sniff glue, but my friends coaxed me into sniffing it,” he says.

Slowly, he developed an addiction.

Like the members of Satar’s gang, Basnet also begs on the streets and picks rags. Basnet earns between 100 rupees and 150 rupees ($1.40 to $2 USD) per day and spends it on dendrite.

Satar and Basnet both say they often have chest pains and fall sick, but continue to sniff glue.

“I don’t have any regrets for using dendrite,” Satar says. “I enjoy sniffing glue because I don’t need to worry about my daily food and warm clothes and hardly think of my mother and family members.”

Acharya says that of the 95 percent of children who sniff glue, many are suffering from several health problems because of it.

“The immediate negative effects of dendrite can be nausea, sneezing, coughing, bleeding noses, exhaustion, bad breath and loss of appetite,” Acharya says. “Deep breathing of the dendrite or using a lot over a short period of time may result in losing touch with one’s surroundings, violent behavior, and loss of self-control, unconsciousness or death.”

Satar says he does suffer from frequent headaches. Basnet says he has nausea and no desire to eat. They say their health issues worsen in the winter because they sniff more glue to cope with the cold.

Long-term use, Acharya says, can have significant consequences.

Research by CWIN has revealed that some children use as many as 15 tubes a day. One tube of dendrite can be used four to five times. Many even use it as a substitute for regular meals.

Nepali-made dendrite is far cheaper than those exported from other countries. It is available in all hardware shops and costs less than 40 cents USD per 25-milligram tube. Krishna Mani Shrestha, a hardware shop owner in Kathmandu’s Chabahil, says the demand of dendrite is high.

“Earlier, I was inquisitive to know why these children often came to my shop to buy the dendrite used to stick carpet,” Shrestha says. “Knowing the purpose, I increased the price of glue to discourage the children from sniffing it.”

While Shrestha’s tactic to discourage the addiction is common, few direct laws exist to control drug use here. The only law related to the use of drugs in Nepal is the Narcotic Drugs (Control) Act, 2033 (1976). It bans the illegal cultivation, production, preparation, manufacture, export, import, purchase, sales and consumption of most common drugs in Nepal. But this law hasn’t been amended yet to prevent the use of dendrite.

As a result, the police face problems in the absence of a law to prevent the use of dendrite.

“We have tried our best to control the illegal sales of dendrite, but we cannot ask the shopkeepers not to sell carpet glue,” says Dibesh Lohani, deputy superintendent of police of Kathmandu. “The street children misuse the dendrite. Police have no legal ground to stop the sales of dendrite.”

Lohani says police are trying their best to curb dendrite use within the current law, but admits that a new law is needed.

“We have deployed tourist police personnel at major places of Kathmandu where the street children buy dendrite and sniff glue,” he says. “But it is a difficult task to convince the street children not to use dendrite. The government should bring in [a] new law to prevent drug abuse among children.”

Child activists say there is an urgent need for a comprehensive and long-term approach to deal with addictions. Penalizing dendrite distributors and users is not enough to curb use, according to CWIN. Counseling, rehabilitation, public awareness and strong government policies are vital to combat glue sniffing.

“The government should ban the sales of dendrite to minors,” Sumnima Tuladhar of CWIN says. “I think that would help control glue sniffing and prevent health hazards among street children.”

To date, Tuladhar says CWIN has rehabilitated more than 6,000 children and has formed a network that is helping to reintegrate children after they recover from their drug addiction. But many of the children don’t view this as a good thing.

According to CWIN, the majority of children opt to return to street life after going through rehabilitation programs. Satar is one of them.

“[The] rehabilitation center is not a nice place,” he says. “I don’t like it. They asked me to quit glue sniffing, which is impossible. Why should I stay away from this addiction when it makes me feel happy and crazy? So I ran away from there.”

But the children say it’s not merely glue sniffing that they are addicted to. They are also addicted to the freedom the streets allow them.

“Besides glue sniffing, I am addicted to the street life,” Satar says. “I don’t want to leave the street at any cost.”

“It’s very difficult to bring those children back to normal life, as they have grown deep addictions towards glue sniffing and street life,” Dhital says. “The only way to help them is educate them and rehabilitate.”

Dhital compared rehabilitating children who have grown used to the street life to domesticating wild animals.

“On [the] streets, they have developed violent behavior, which makes it difficult to start normal life,” Dhital says.

The government developed a plan that would take steps to rehabilitate all of the country’s children living on the streets, but a strapped budget has put it on hold, according to The Kathmandu Post. Officials say they intended to launch the rehabilitation project, “Free all children from the streets,” in October 2010, but the budget could not support the cost, estimated at 10 million rupees ($140,000 USD).

The campaign was to be buttressed by a public-private partnership, but the state was unable to come up with its half of the money, says Laxmi Prasad Tripathi, spokesman for the Ministry of Women, Children and Social Welfare.

“First, the delay in budget posed a hurdle, and later the Ministry of Finance refused to allocate 5 million rupees for the project,” Tripathi told The Kathmandu Post. “Around 50 percent of the amount for the project was supposed to be borne by the government.”

Tripathi says the future of the project is now uncertain.