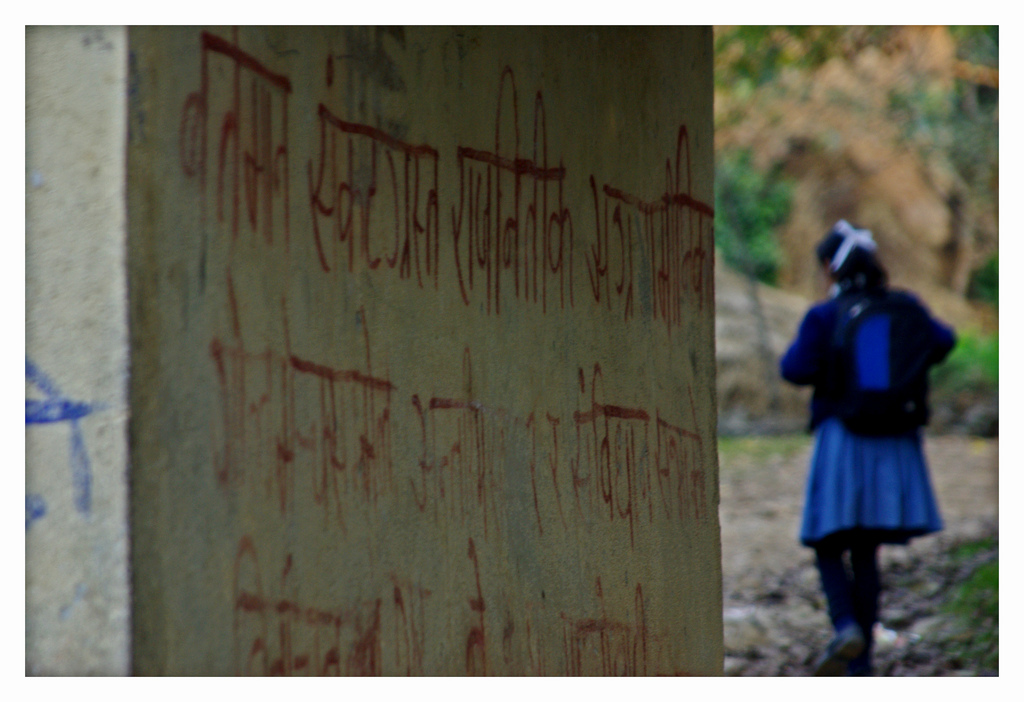 Although the cost puts tremendous financial pressure on her and her husband, she decided it was worth it to enroll them in private school. Her 5-year-old daughter, Safalta, now studies in kindergarten, and her 9-year-old son, Safal, is in first grade at Sneha Secondary English School.

“I worry about my two children a lot,” she says. “Even if I have to live on one meal a day, I’ll have them in a private school.”

Karki, a housewife, says her family can be considered low-income. Her husband works labor jobs. He earns up to 400 rupees ($5) a day, when there is work. It’s therefore a struggle for them to afford their children’s expenses at a private school.

Karki says she has chosen one of the cheapest private schools in the capital. Still, she must pay 700 rupees ($9) a month for tuition, plus 3,500 rupees ($45) a year for other fees, such as admission and exams.

Education would’ve been free for her children up to the eighth grade in their government school. But Karki says they might not have received sufficient education to pass exams necessary to advance to higher levels of schooling.

“In government schools, they don’t really teach in English,” Karki says. “There wasn’t even enough care for my daughter who was in kindergarten. That’s why I had them removed from the government school.”

A growing number of parents are sacrificing whatever necessary to enroll their children in private schools because of the poor performance of government school students on Nepal’s major exam. Government school principals and teachers agree that the education they offer is poor, citing a lack of infrastructure, innovation, learning materials and dedication of parents, teachers and students. Even the government admits the poor value of the free education and has hired an educational expert to lead the reform.

There are 33,160 schools in Nepal. About 85 percent are government schools, and 15 percent are private schools. But the success rate on the School Leaving Certificate, the final exam in Nepal’s secondary school system, is nearly double at private schools. Students must pass the exam, popularly known as the “iron gate,” to advance from 10th grade to higher education.

During the 2010-2011 school year, 397,759 students took the School Leaving Certificate exam, according to the Ministry of Education. Of the 307,611 students taking the exam from government schools, just 46 percent passed. On the other hand, 85 percent of the 90,148 private school students who took it passed.

Naresh Magar is an eighth-grade student at Shree Adarsha Saral Secondary School, a government school in Lalitpur, a district in central Nepal. He says the education he receives there is poor.

“Teachers in our school don’t put any effort into teaching us,” he says. “They bracket the weak student[s] and the rest together and just teach the content of the book, without explaining it properly.”

He says that his teachers also don’t check their assignments.

“At times, for these reasons, I wish I could also study in the private school that’s nearby,” he says. “But I can’t because my parents cannot afford it.”

Private schools in Nepal have typically been reserved for families with strong incomes. But a growing number of parents who can’t afford it are making great sacrifices to send their children to these private institutions because of the disparity in educational quality between public and private schools in Nepal.

“It’s because of the poor educational standards in government schools that I admitted my children at a private school,” says Jeevan Lamsal, a parent in Kathmandu.

Lamsal is willing to make any sacrifice to make sure his children can advance past grade 10.

“Even though my financial capabilities are far from having them in private school, I’ll do whatever it takes – even go abroad and work,” he says. “If I let them study at a government school, I don’t see them even passing the School Leaving Certificate.”

Many parents in Nepal analyze the success rate on this exam to determine the quality of education at private versus government schools.

Uddav Adhikari, a teacher at a government school in Kathmandu, has even enrolled his children in private school. He says this is because the educational quality at government schools is poor.

Jaya Upreti, principal of Kashinath School, a government school in Nepal’s eastern district of Tehrathum, attributes the poor performance in government schools to students’ irregular attendance, parents’ lack of interest in their children’s education and low number of classes taught in English.

He says that students and parents prioritize their household chores, making education a secondary concern for many. On the other hand, private schools are strict on the students’ attendance. Private school students can miss school only in special circumstances, or else they are fined, Upreti says.

“Students who live near sometimes don’t attend classes because their household chores are more important,” he says. “Most of the male students in the ninth and 10th grade go to India for labor work after two to three months at school. They come back after six [to] seven months and then prepare for the exams.”

“The school I teach is only accessible after a two-day walk from the nearest road,” he says. “Twenty-five percent of the students walk for two to three hours one way to come to school. For 10 percent of students, it becomes difficult to walk five to six hours daily and especially during monsoon, when they have to cross the rivers.”

“Due to various holidays and irregular attendance at school, classes run for only 150 days in a year,” he says. “So when there are no students or so few classes, how can the quality of education be improved?”

“This leaves [us] with less study days at school, leading to few students passing,” he says.

In districts that lie at high altitudes, like Dolpa, schools remain closed from November to April, says Basanti Kathayat, a government school teacher there.

“Due to the snowfall, students can’t come to class,” she says.

Most of the schools in this region are government schools.

Shahi also cites traditional teaching methods for poor performances in government schools. Teachers rely on outdated syllabi and promote memorization from textbooks rather than encouraging students to explore the material.

Indu Panta of CARE Nepal, an international nongovernmental organization, says cumulative examinations that ask students to sum up everything they’ve learned during the year in a three-hour written test don’t encourage true learning. She says students start studying only days before the final exams and focus on memorizing the answers to questions that are likely to appear on them instead of learning the material.

“While in college, we used to say that, ‘We’re going to puke in the exams,’” she says, “‘Puke’ meaning writing whatever we had rote for the exam.”

Or other students pass by cheating, she says.

Shahi says cheating is a problem at his school as well. He says that he is surprised that 70 percent of his students passed the School Leaving Certificate exam.

“Honestly, only 20 percent of students deserved to pass,” he says. “Last year, the students cheated during the exam, and the invigilators were pretty relaxed. Students are more centered on how to cheat and pass the exam [than] coming to classes and studying.”

Others cite a lack of dedication among teachers in government schools.

“The teachers seem to focus more on their personal works at home and/or [are] busy participating in seminars or get involved in different political wings,” says Kul Prasad Kafle, a government school principal in Tehrathum. “And due to their political or organizational affiliation to a party, they can’t even be fired.”

Meanwhile, teachers cite a lack of interest among parents.

“I’ve been teaching for seven years, and I haven’t had any parent come to me and complain or know about their child’s studies,” says Nirmala Dhakal, a teacher at a government school in Morang, a district in eastern Nepal. “It’s because the parents don’t invest their time that the problem exists in government schools.”

Roj Nath Pandey, spokesman for the Ministry of Education, says that the government has various schemes in order to attract and retain students at government schools.

Some of the benefits include free books, free education up to the eighth grade, and scholarships for students from marginalized communities and minority groups. In 35 of the most rural districts, students also receive free lunch when they come to school. In many of the government schools, classes are also offered in English.

“From this school session, we’ll try and have the books delivered within two months from when the school starts,” Pandey says.

Still, Pandey admits that the government needs to revamp education in its schools, echoing Shahi’s and Panta’s criticism of the outdated and ineffective curriculum style and examination system.

“The tradition of rote learning and the way examinations are conducted should be changed,” he says.