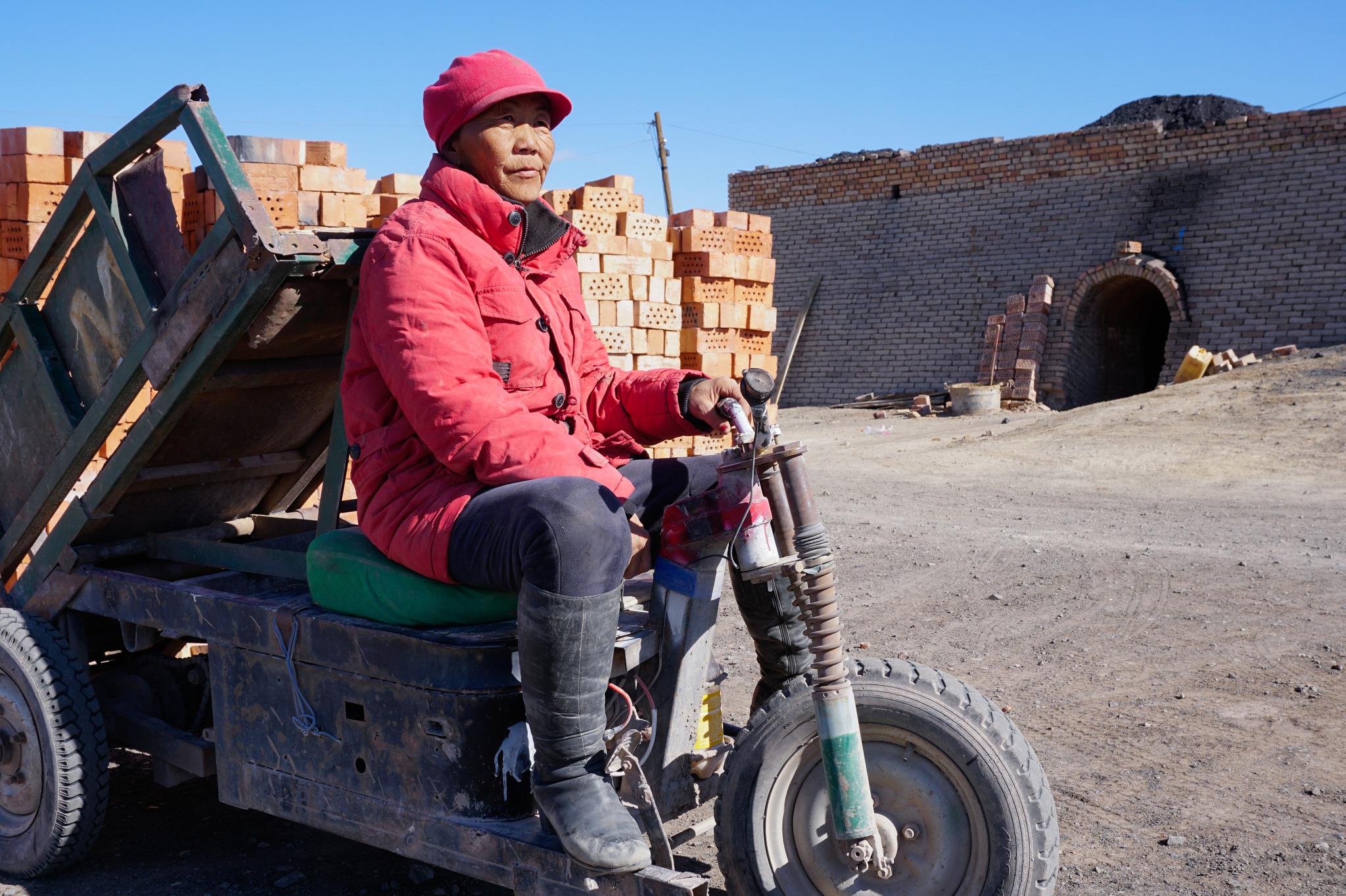 DALANZADGAD, UMNUGOVI PROVINCE, MONGOLIA — After a lifetime spent tending to cattle in the countryside, Sainaa Tserenjigmed settled in the provincial capital of Dalanzadgad and began dreaming of a house of her own.

To build it, she would need a loan of 30 million Mongolian togrogs ($8,800), an amount that seemed out of reach until Sainaa stumbled across a comment on Facebook offering low-interest loans without guarantors. Her interest was piqued.

It was early 2018 and the internet was still a brave new world for Sainaa. The previous year, she’d bought herself a small, white smartphone and her son installed internet at home. “Facebook seemed new and strange, so I started digging tirelessly,” she says. Soon, she was using the platform to watch videos, keep up with the news and communicate with her family and friends.

The person offering loans on Facebook had a foreign-sounding name but his online persona seemed trustworthy to Sainaa and he had many friends, lots of whom were Mongolians. She reached out, expressing a desire to take out a loan. The response was quick, she says, and the subsequent correspondence unusually friendly. Sainaa was instructed to transfer $120 as a processing fee to receive the first tranche of money. To speed up the process, she decided to schedule four separate transactions in different amounts via Western Union, two to three days apart, amounting to $1,000 in total — more than twice the average monthly salary in Mongolia at the time.

But the person kept asking for more money.

“That’s when I realized something was wrong,” Sainaa says, “and I contacted the police.”

As internet penetration has intensified across Mongolia in recent years — 62.5% of Mongolians used the internet in 2020, compared with a mere 10.2% in 2010 — the incidence of online scams has skyrocketed. According to Mongolian police, while overall registered crime decreased between 2021 and 2022, scams increased by more than 50%, accounting for more than a quarter of all criminal complaints.

“As people’s internet usage increases, fraud-type crimes are moving online,” says Oyunbold Ganchuluun, a criminologist and head of the Mongolian Bar Association’s criminal justice committee. Facebook, the country’s most popular social media platform, is a common conduit for fraud. One popular trend, Oyunbold says, is for scammers to hack people’s Facebook accounts, study their relationships with those close to them, then strike up a conversation and eventually ask for money.

Last year, Bat-Amgalan Ulziisaikhan was contacted by a woman on Facebook Messenger. “You were infected with the coronavirus before,” she wrote. “The Ministry of Health is surveying people.” Bat-Amgalan, a resident of Sukhbaatar province in eastern Mongolia who works for the social insurance department — a government agency — duly filled out the survey, after which he received a message. “Please click the link and provide your bank account details,” it read. “You will receive money as incentive for your participation in the survey.” Bat-Amgalan happily complied.

After some time, he began to be inundated by calls from friends. “Are you in money trouble?” they asked. “What happened to you?” That’s when he realized his identity had been stolen.

When Sainaa contacted police after realizing she had been defrauded, she was told there wasn’t much that they could do, especially since the money had been sent abroad. (Her money transfer documents, reviewed by Global Press Journal, indicate recipients in the West African countries of Togo and Benin.) “The police said there was little chance of finding the criminal,” she recalls, adding that they said they’d registered many cases of people similarly duped.

Bayarbat Batsaikhan, a senior detective in Umnugovi province, says that while police can identify account holders, it is difficult to track down the money because “it is very common that the account holder is an indirect victim, having his or her account used by others.”

Mongolia’s National Police Agency did not provide information on how many cases of online fraud have been successfully resolved, but agency figures show it’s a growing problem. The agency registered 17 cases of electronic fraud in 2015; in the first 10 months of 2022, that number already stood at 6,759. Data indicates that 455 people were fined, 239 people were imprisoned, and 227 people were sentenced to community service for all types of fraud between 2017 and 2019.

Sainaa could not afford to lose the money she sent to the scammer. Her desperation made her reckless. Shortly after, at the urging of an acquaintance, she put up her property as collateral and borrowed another 5 million togrogs ($1,465) to invest in an online scheme. She believed she would receive dividends every week and eventually turn a profit on her principal amount — she even ordered two Visa cards, as instructed, so that she could receive money from abroad. “I have been a blue-collar worker all my life,” she says. “And I thought I could make money by doing this.”

The setup turned out to be a Ponzi scheme, orchestrated — according to news reports — by someone from another country. One day, when Sainaa called up her contact to inquire about her dividends, she was informed that the scheme had gone bankrupt. When she asked about her initial investment, they replied: “My mom died, and I am very busy. Lots of people were scammed with hundreds of millions. Five million is nothing.” 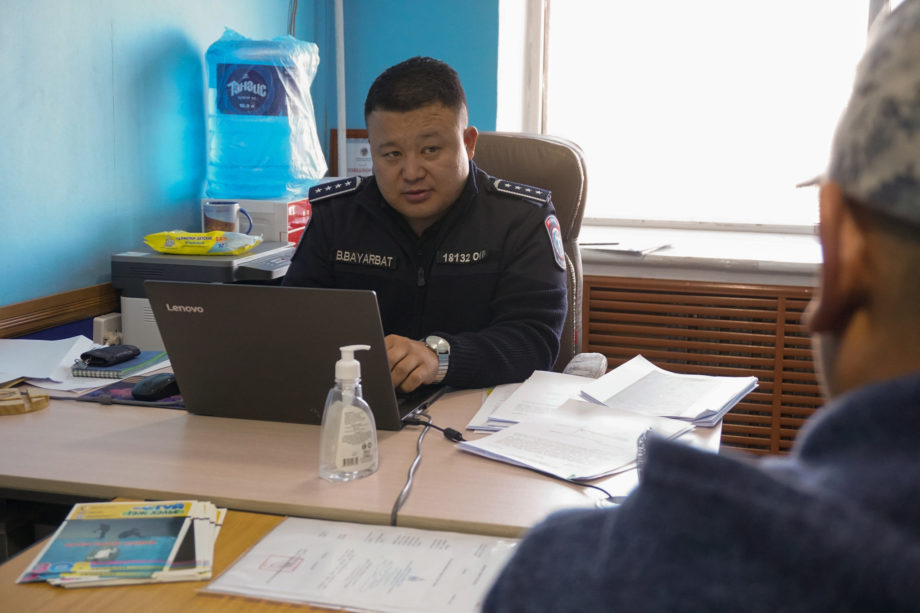 Bayarbat Batsaikhan, seated in his office at the police headquarters in Umnugovi province, takes a statement from someone who says they were scammed online.

“I am a very compassionate person,” Sainaa says. So she kept quiet.

This time, she didn’t file a complaint with the police. There are many others like her, Oyunbold says. “Official figures do not indicate anything — most of these cases remain hidden,” he says. “People who lose small amounts of money do not consider it a crime and don’t contact authorities.” He says the actual number of fraud cases may be well over 10,000 — much higher than what the official figures reflect.

Munkhtuya Batchuluun, who was romanced online by a man from another country — purportedly the United States — is one of these hidden cases. For two months, the man told her tall tales of inheriting huge wealth, promising to visit Mongolia soon to marry her. “He showed me photos that he was sending many kinds of packages and gifts,” she recalls. “But a few days later, a message came that the receiver of the parcel should pay the fee as it got stuck somewhere.” After transferring $130 or about 440,000 togrogs, Munkhtuya found herself blocked by her online boyfriend.

“I was ashamed of contacting the police,” she says.

There is a stigma when it comes to those who have been defrauded, says Oyunbold, which deters people from speaking openly about their experiences. “People often discuss abstract reasons of trust and greed. In fact, the actual reason is that people still lack basic financial knowledge,” he says. “Their family environment and education do not provide them with the education and critical thinking to identify false information.”

In recent years, the National Police Agency has been running campaigns to help Mongolians identify online scams — but as internet usage increases, the collective damage continues to rise too. In 2016, scams (online and otherwise) cost Mongolians 2 billion togrogs ($585,815); by 2020, the number had shot up to 67.2 billion togrogs ($19.7 million).

Twice duped, Sainaa — who currently works at a brickmaking factory — is more vigilant now. But her property, which she put up as collateral to participate in the second scheme, remains mortgaged. More than four years on, she is still paying the price.