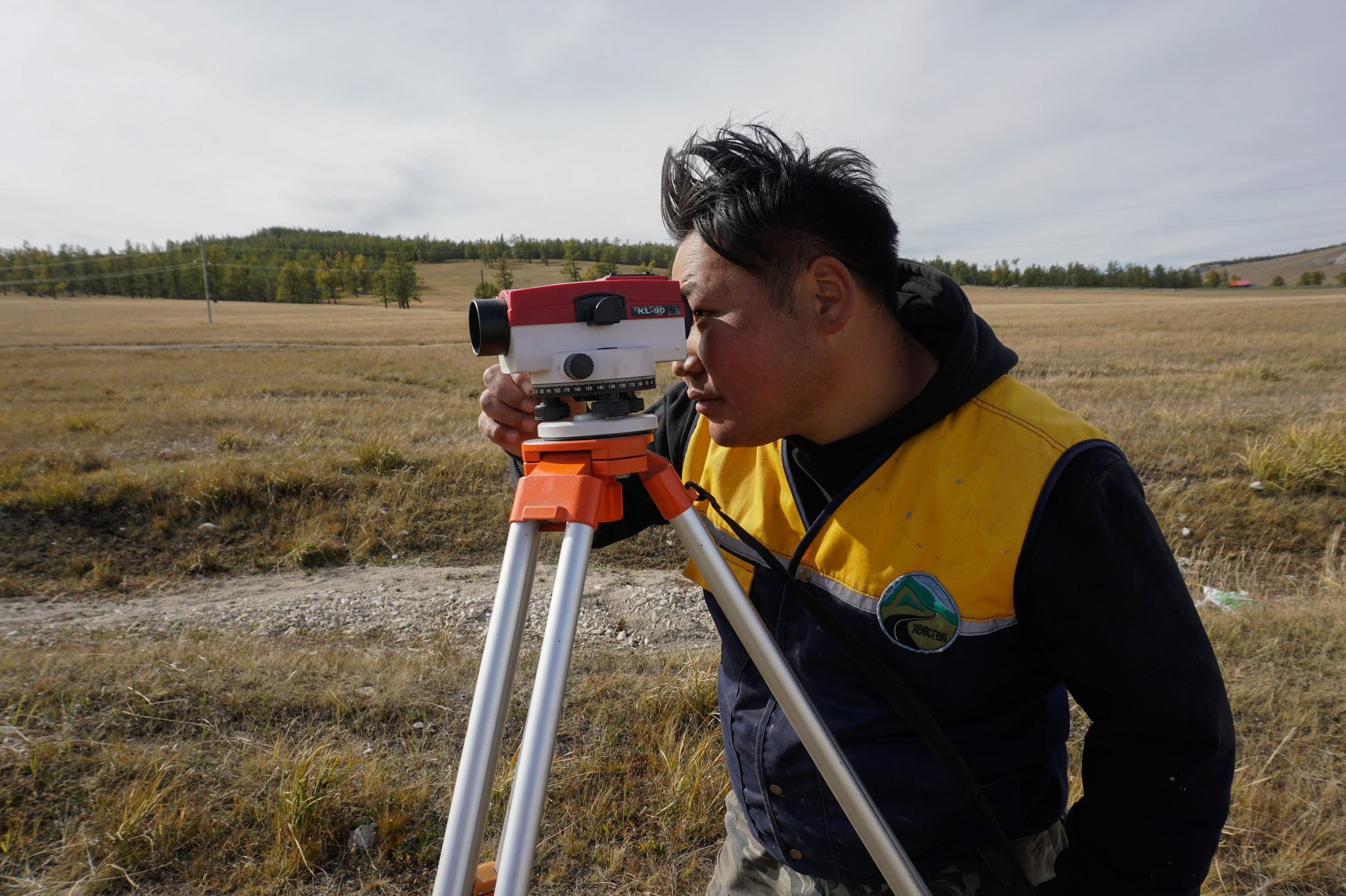 ALAG-ERDENE, KHUVSGUL PROVINCE, MONGOLIA — Munkhbaatar Tumur mounts a scope on a metal tripod and peers through it. He assesses the elevation of a road that stretches across the steppe and into the mountains.

He is a general engineer at Khuvsgul-AZZA, a state-owned corporation responsible for maintaining the roads in this northernmost province, on the border with Russia. Today, he and his team are repairing bulging and sunken asphalt along the road, which stretches more than 100 kilometers (62 miles) up to Khuvsgul Lake.

“Subsidence occurred due to permafrost here in this section,” Munkhbaatar says. To repair the road, the team fills in potholes and levels uneven areas, then covers the repairs with a cement-concrete composite.

Repair teams have been busy across the country. Since Mongolia’s transition to democracy and a market economy in the 1990s, the government has made road construction the backbone of its regional development plans, helping to connect urban centers, reduce transportation costs and improve travel times between cities for people and goods. In 1998, the government established a domestic road network and connected the country to the Asian Highway Network, which links Asia and Europe. And in 2001, the government launched the Millennium Road project to build a main east-west highway across the country, as well as a number of north-south highways to connect provinces and link Mongolia with China and Russia. 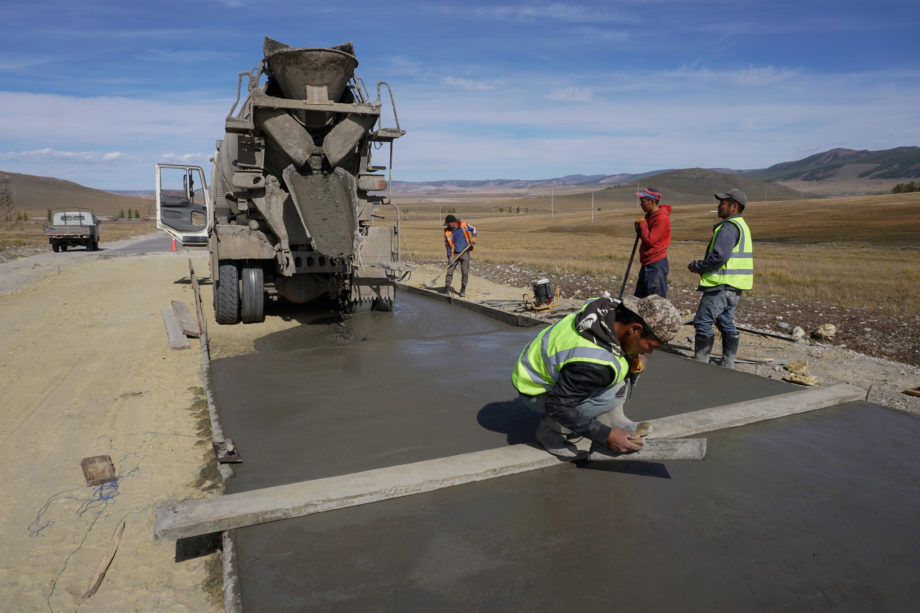 Workers pour a cement-concrete mixture on the road and smooth it by hand.

As of 2020, Mongolia had built about 15,000 kilometers (9,300 miles) of national roads, about half of which are paved, says Khanbayar Amarsaikhan, head of road use at the national Road and Transport Development Center, a state-owned enterprise. “We have never had such a long road [network] like this before.”

But as the infrastructure network has grown, problems have skyrocketed, with roads requiring significant and frequent repairs. In 2020 alone, heavy rain damaged and destroyed national roads in 46 locations in 18 provinces, according to the Ministry of Road and Transport Development of Mongolia. Traffic was disrupted and safe travel became impossible in many parts of the country, as drivers slipped and became stuck on muddy, damaged roads. 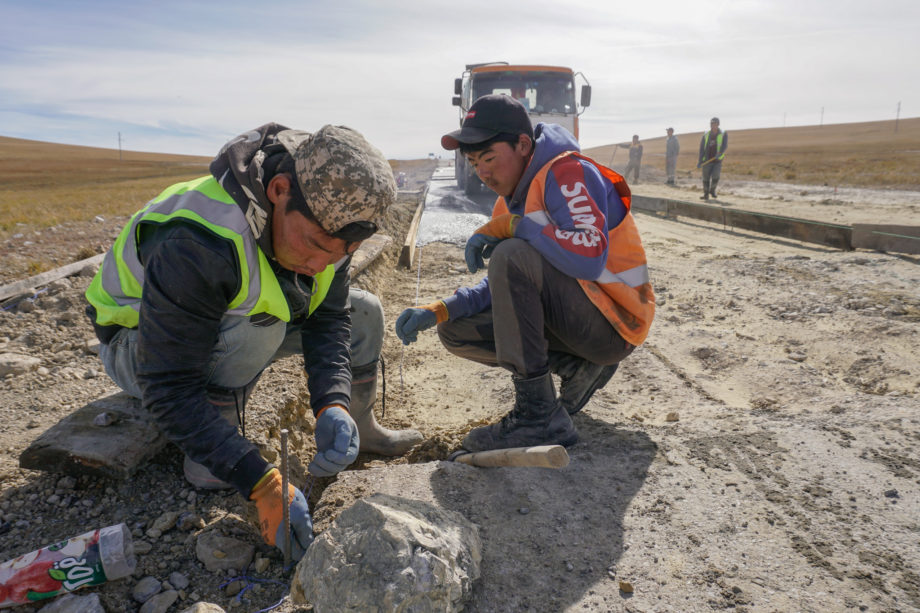 Dangerous potholes emerge each year on the roads in the center of Murun, the main city in Khuvsgul province, says Ganbat Mishingee, a local resident who runs a small food shop with his wife. He bought a car in 2018 and says the shock absorbers have already deteriorated, and he has had to replace four tires after distributing his food products via local roads.

“Tires, especially on small cars, do not last on the road up to Khilent Bridge,” he says, referring to the road leading south out of town.

Many of these problems are the consequence of changing weather conditions caused by climate change, engineers and road repair officials say. In Khuvsgul province and other parts of the country, the rising global temperature is increasing the size and intensity of floods and melting the permafrost atop which the roads are built.

“As soon as the ice melts, the ground sinks, and the road sinks,” Khanbayar says. “It’s a big challenge for us.”

Paved roads also contribute. The black asphalt heats up as it absorbs sunlight, then melts the permafrost beneath it.

Khanbayar says engineers have been experimenting with ways to prevent the permafrost from melting, such as drilling ventilation pipes to keep the roads cool. He says another major cause of damage is overloaded cargo trucks that exceed the roads’ weight limits. As the number of paved roads has increased, the problems have only grown. 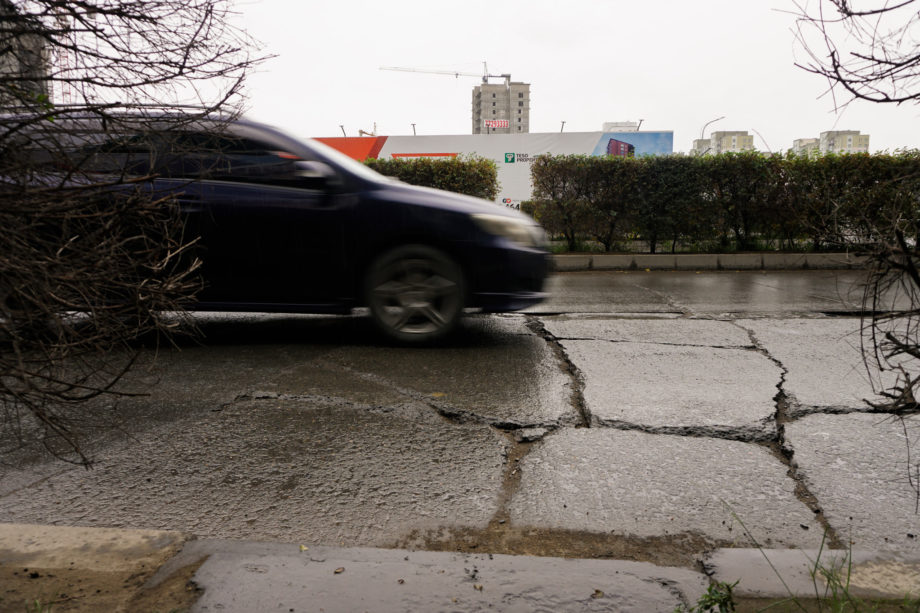 Cracks and potholes scar a road in Ulaanbaatar, the capital of Mongolia.

Some critics blame the road construction companies themselves.

“Road companies are for-profit organizations,” says Lkhagvaa Bayantogtokh, the head of For Khuvsgul Development and Progress, a local nongovernmental organization that has collaborated with the World Bank on road inspections in Murun.

“They only want to work and make money, be it with a quality road or not.”

Oyuntuya Munkhbat, head of the Development Policy Department at the provincial Governor’s Office in Khuvsgul, says road companies in the province tend to pursue major national projects. “Therefore, big road companies are unable to work on road patching and minor and low-budget roadwork,” she says. 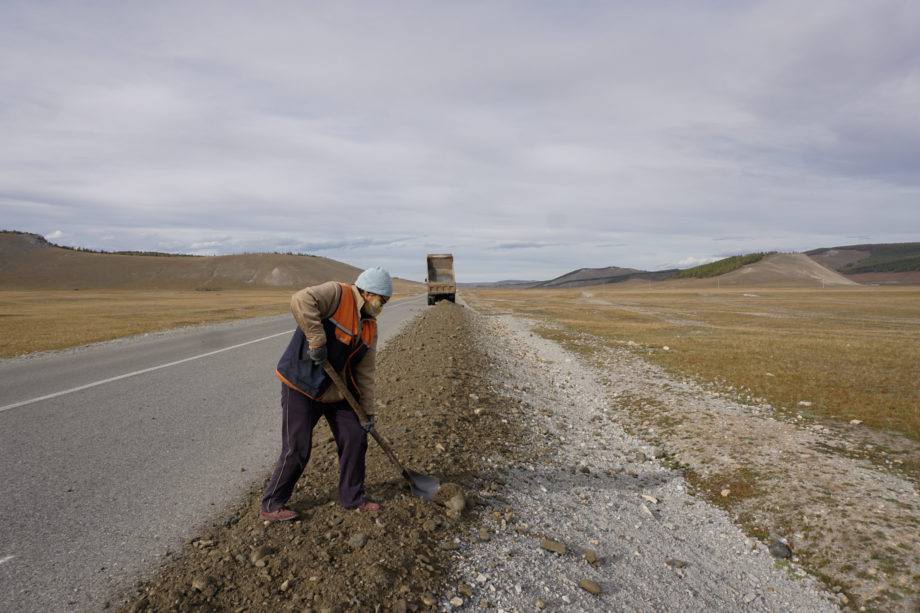 Galbadrakh Buriad, executive director of Khuvsgul-AZZA, says the company is doing the best it can with the limited equipment, manpower and funds at its disposal. “Road maintenance work slows down because of poor availability of technical and human resources,” he says. To keep up with demand for repairs, he says, the government should provide more funding and equipment.

The Road and Transport Development Center estimates that it would cost 60 to 65 billion Mongolian togrogs ($21 million to $23 million) each year to prevent Mongolia’s roads from deteriorating. In the 2021 budget, however, the Ministry of Finance approved only half that amount.

That decision is partly due to the economic strain caused by the coronavirus pandemic. But it simply isn’t enough to support the country’s road repair needs, Khanbayar says, and it suggests that road maintenance needs to increase in priority. “Right now, there is so much road damage,” he says. “But the budget is not enough to conduct maintenance according to the norms and standards.”