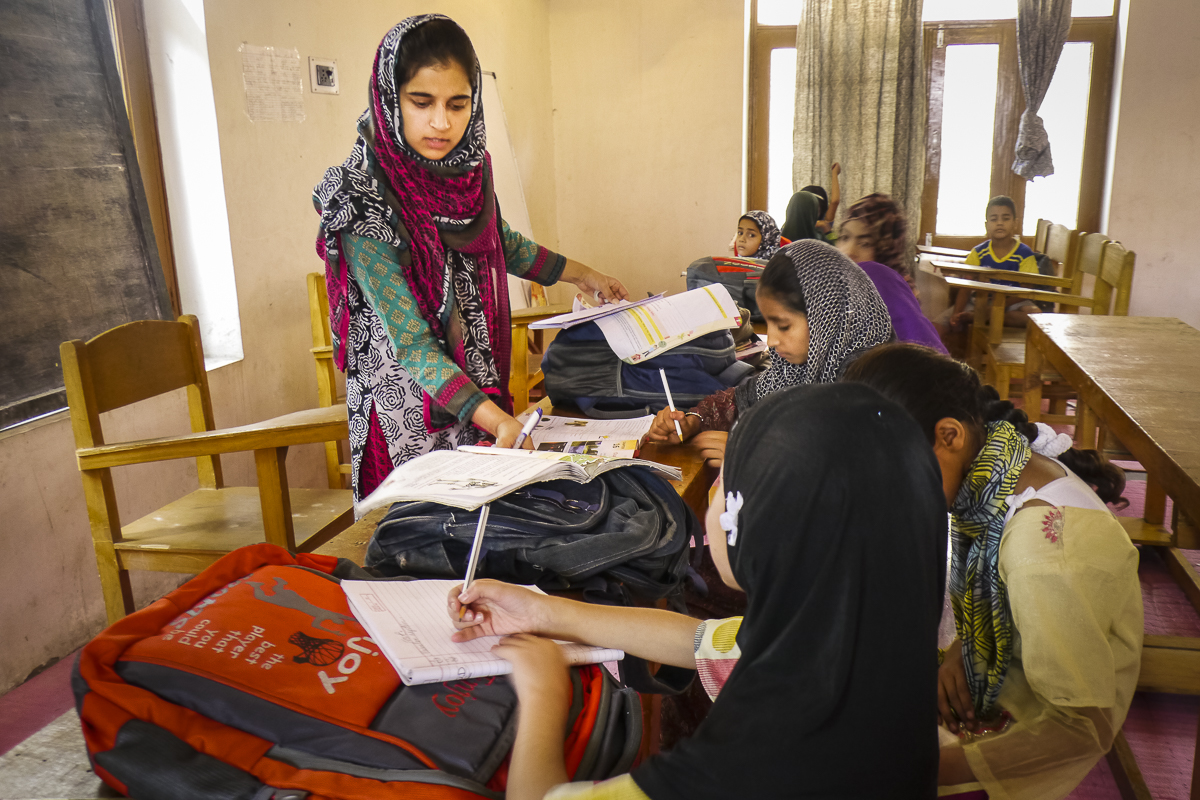 SRINAGAR, INDIAN-ADMINISTERED KASHMIR — The streets are narrow in Khanyar in the downtown area of Srinagar, Indian-administered Kashmir’s summer capital. This is the older part of town, with historic mosques, shrines and markets.

It is also an area filled with Indian armed forces, who walk along the narrow lanes and patrol the roads in military jeeps. Wearing helmets and carrying guns and bulletproof shields, they are ready to meet any protesters who emerge from the narrow alleys.

Children walk past the Indian forces patrolling the neighborhood of Kaw Mohalla and make their way to a single-story building inside a walled compound.

For the past month, this has been their school.

The large hall has been divided into four sections, facing away from one another and toward teachers who stand next to whiteboards in four corners. Tables and chairs of various sizes are arranged into a classroom setting, and piles of books and bags clutter the floor.

For the children of Khanyar, this “curfew school,” as it’s locally known, is their only access to education. 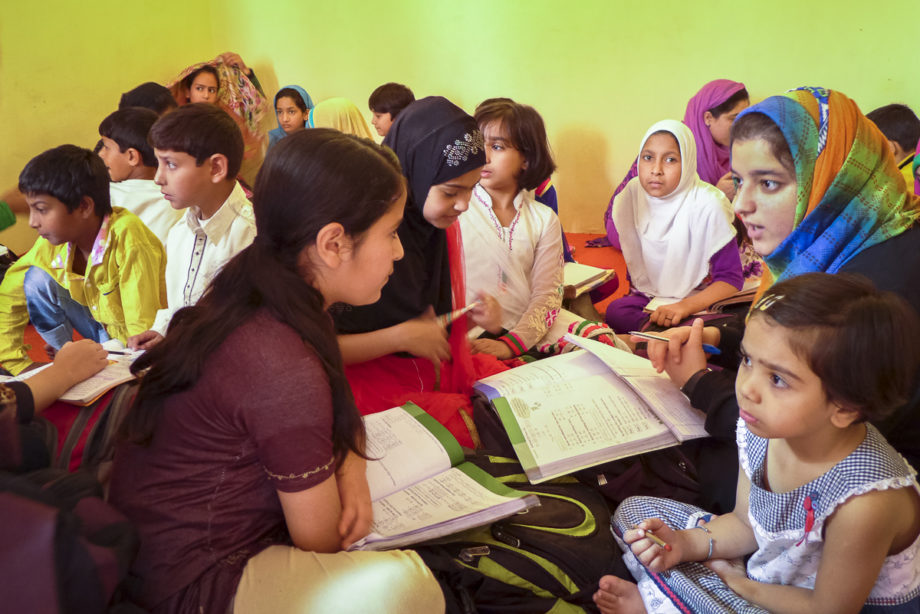 Students assemble at a “curfew school” that opened on Aug. 11. It’s one of several schools that opened to serve students whose regular schools closed due to protests and a military-enforced curfew.

The Kashmir Valley has been under a police and military-enforced curfew since early July, when protests erupted following the killing of Burhan Wani, a commander of Hizb-ul-Mujahideen, a militant separatist group in Kashmir, a day earlier. An intermittent curfew, imposed in different areas of the valley at different times, and a heavy Indian security force presence has restricted people’s ability to travel freely in the Valley.

More than 70 people are estimated to have been killed since the protests began, and thousands more have been injured from pellet guns fired by the Indian security forces. Life has ground to a standstill in Indian-administered Kashmir, with businesses and offices closed as Indian forces try to stop the protests by people who oppose Indian rule.

Schools, which closed for the summer holidays on July 1 with plans to reopen on July 17, have remained closed, as restrictions on movements make it impossible for students and staff to reach them.

The prolonged curfew and restrictions have led to the creation of “curfew schools” or “community schools” in the valley ─ places of informal instruction where volunteers teach students for a few hours a day to keep them focused on their studies and motivated.

The schools function in community centers, mosques and even private homes. Locals estimate there are six curfew schools in Srinagar, and it is believed there are dozens more spread through the main towns in Kashmir Valley. No official numbers are available. 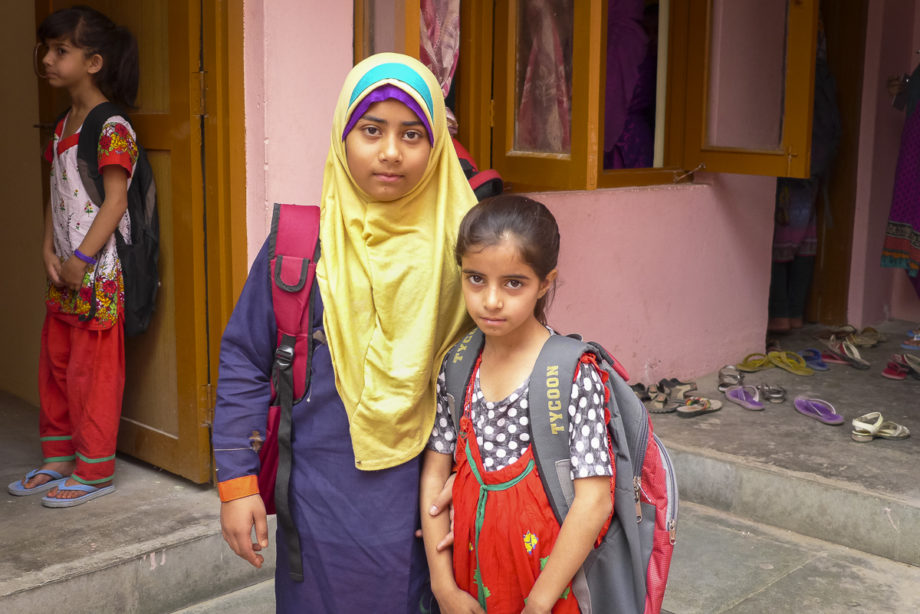 Furniture and some school materials were borrowed from the local schools, and other materials were donated by residents, Ahmad says. The school was then advertised through the local mosques, where announcements were made over the loudspeakers that are generally used for prayers.

“The students started to come, and the number keeps on increasing every day,” Ahmad says.

At the end of the first month, on Aug. 31, there were 300 registered students, says Imtiyaz Ahmad, a volunteer teacher. 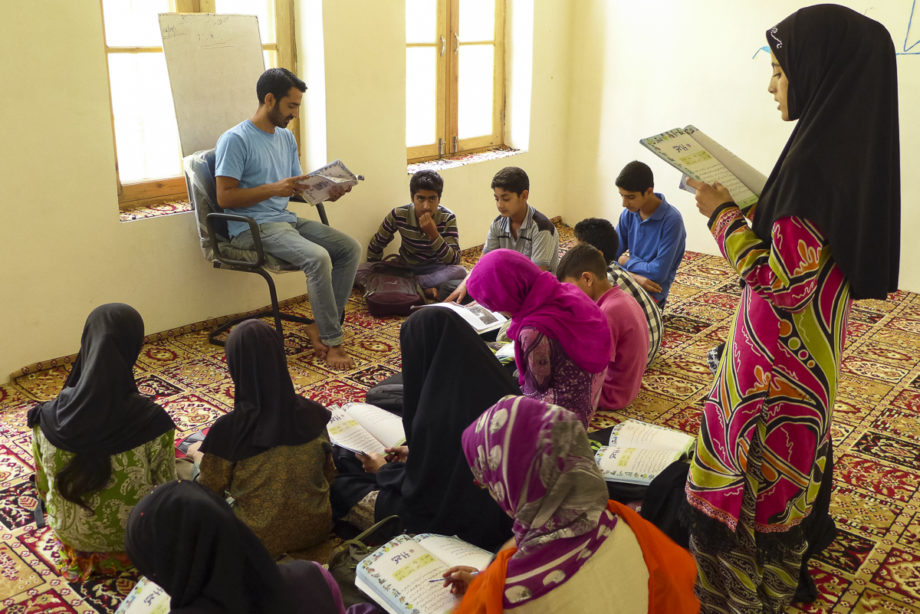 The classes are divided by grade, from grade 1 to grade 12, and are taught in batches. The 12 volunteers variously teach English, Urdu, math, social science, science, physics and chemistry. Classes run 9 a.m. to 6 p.m. Monday to Saturday, and each class has 12 to 15 students.

“We didn’t want the students to suffer under any circumstances,” Imtiyaz Ahmad says. “Education is necessary for the students, and we feel pride in giving it to them in such situations.”

The teachers are all volunteers and receive no payment for their work, Nissar Ahmad says.

“Any student can come here and get education,” Imtiyaz Ahmad says. “It is all free, and we are not paid to do it. We do it for humanity.”

Students in Khanyar are grateful they have a school they can attend.

“I had been sitting at home for the last 30 days, and the syllabus was incomplete,” says Sehrish Shabir, a student at Batul Memorial Institute, a local private school.

Sehrish, 15, is in grade 10 and is preparing for the exams organized by the Jammu and Kashmir State Board of School Education in November. The results of these exams will determine whether she advances to grade 11, which will prepare her for university entrance exams.

“I come here to learn maths and science in particular,” Sehrish says. “I used to miss my school and studies, but now I don’t.” 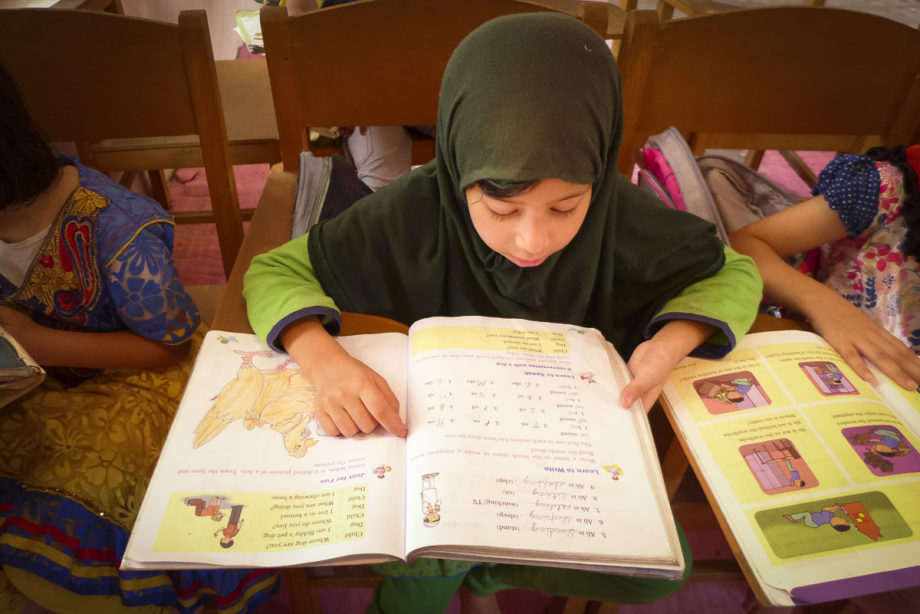 Students at a “curfew school” in Srinagar’s Kaw Mohalla area review their lessons. The school includes students ranging in age from young children to students in Grade 12.

Sarbuland Mir is another Khanyar resident who says the curfew school is a blessing for him.

Sarbuland, 15, attends a local government school and is also in grade 10, and attends the curfew school from 4 p.m. to 6 p.m. six days a week.

“I am a little weak in maths, but the teachers here teach with understanding,” he says. “The school is close to my home, and it’s easy for me to come here and gain what I have missed due to the present situation.”

But sometimes, Sarbuland says, he and other students fear the journey to and from school.

“The lanes are full of security forces, and I am afraid while walking past them, and sometimes I try to find alternative routes to school, and sometimes they don’t allow us,” he says.

Sarbuland has had to turn back home on some days, but he has also found alternative routes to school that avoid the heavily patrolled lanes, he says.

Sarbuland says he and his friends from the neighborhood travel to school together, as they feel less afraid when they are in a group.

Nissar Ahmad says the masjid committee is considering continuing the curfew school as a free, after-school tuition center even after the present crisis situation eases.

Imtiyaz Ahmad hopes that curfew schools can be opened in every area of Kashmir Valley.

“Every child in the valley is suffering for the want of education, and people should come together and teach the children of their area,” he says. “The younger generation is the future of a community, and they should not be deprived of their basic right to education.”

EDITOR’S NOTE: Nissar Ahmad and Imtiyaz Ahmad are not related.