Skip to main content
The story you are reading was published on Sunday June 14, 2015. To read more recent stories click here. 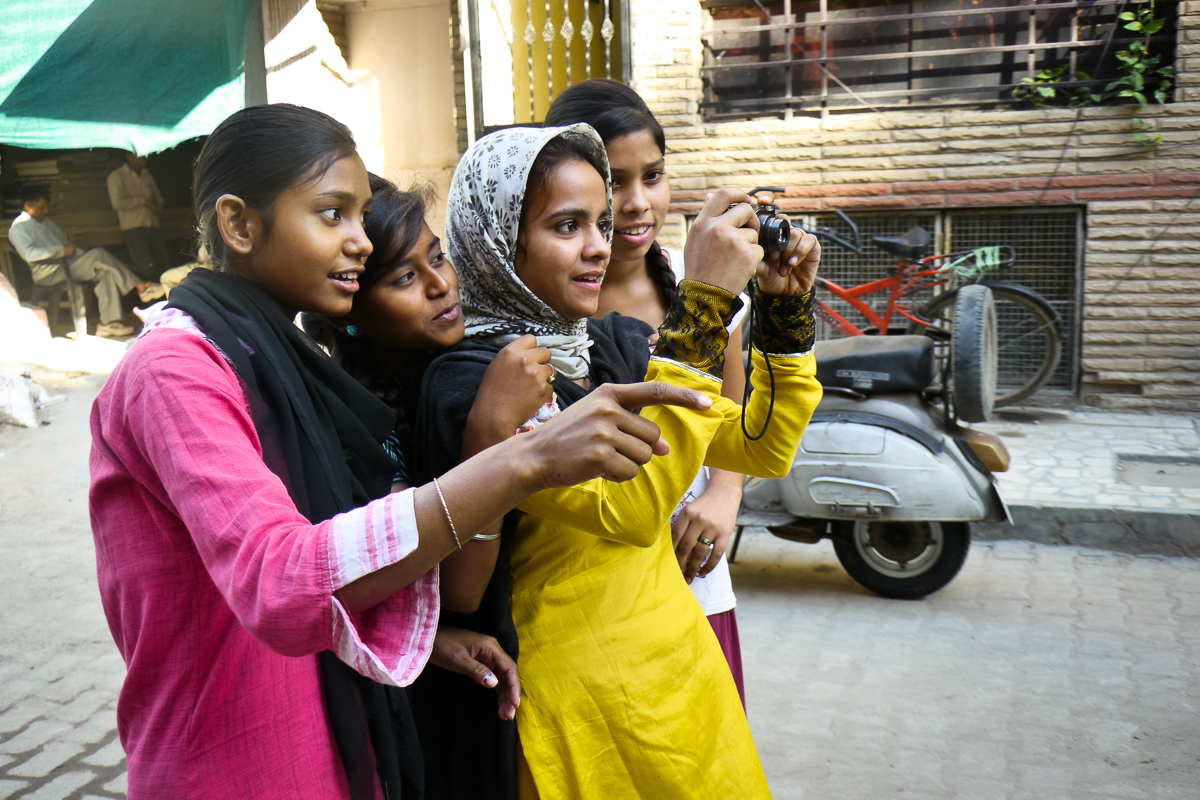 The students quickly minimize the browsers with which they’ve been doing their research and focus on the writing assignments on their PCs at the office of Buragohain’s nonprofit organization, Feminist Approach to Technology, in New Delhi, India’s capital. The keyboard clatter increases as Buragohain asks the students for their assignments on early marriage.

Buragohain tiptoes around the classroom, looking at each screen.

Standing behind one student, she reads aloud from the student’s assignment: “All my friends and cousins were married before the age of 15. I am lucky as I am 21 but still unmarried.” She pats the young woman on the head and encourages her to finish the story.

“Early marriage is a menace that unites all girls at the center,” Buragohain says to the class.

Three teens approach her with a paper. They confidently suggest changes in their project.

“We want to produce a skit on the theme, ‘My Life, My Right. End Child Marriage,’” the trio says in unison.

My parents would always insist that I should marry. There was not a single day when I would not be told that education can wait but marriage cannot. — Rekha Yadav, 20, Feminist Approach to Technology trainee

Buragohain listens carefully, compliments the students and asks them to develop the idea.

“We will together weed out the problem,” she says. “We will kill this monster.”

Buragohain’s friendly attitude breathes life into her work. She cultivates a milieu in which young women can freely discuss topics that are generally taboo in India, such as HIV/AIDS, menstruation, sexual harassment, sanitation and reproductive health. They share their ideas in a project Buragohain recently launched on early marriage.

Through her organization, Buragohain teaches free technology courses to young women from low-income communities who have limited access to the field because of their gender and socioeconomic standing. She piques their interest in the technology sector and teaches them to narrate untold stories from their communities using filmmaking and social media.

In 2015, Buragohain’s organization launched a project that uses this technology training to explore social issues. She is teaching 30 girls and women ages 14 to 25 to use their skills to sensitize the five southern New Delhi slums from which they hail to a pressing issue they have identified: early marriage.

Buragohain always wanted to create something that would be different and helpful, she says. While working at an Indian feminist human rights organization, she realized that girls were not studying science, technology, engineering and mathematics – or STEM – subjects.

Determined to usher more young women into STEM studies, Buragohain founded Feminist Approach to Technology in 2008. More than 300 girls and women have participated in workshops on basic computer skills and women’s rights at the organization’s center since 2010.

“There are no statistics to confirm the exact number of women innovators who empower young women through technology in India. But they are less,” says Taberez Ahmed Neyazi assistant professor at the Centre for Culture, Media and Governance in Jamia Millia Islamia university in New Delhi.

The center focuses on interdisciplinary research on social and cultural issues, including technological expansion in India.

A 2014 global survey by the ManpowerGroup, an organization working on workforce solutions, determined that the Asia-Pacific region faces a talent shortage of 48 percent, and India faces a 58 percent shortage.

The region faces a serious labor shortage in STEM fields, particularly among women, according to a 2015 UNESCO report.

Globally, women represent less than 30 percent of researchers in science, technology and innovation, according to the report. In South and West Asia, only one in five researchers in these fields is female. 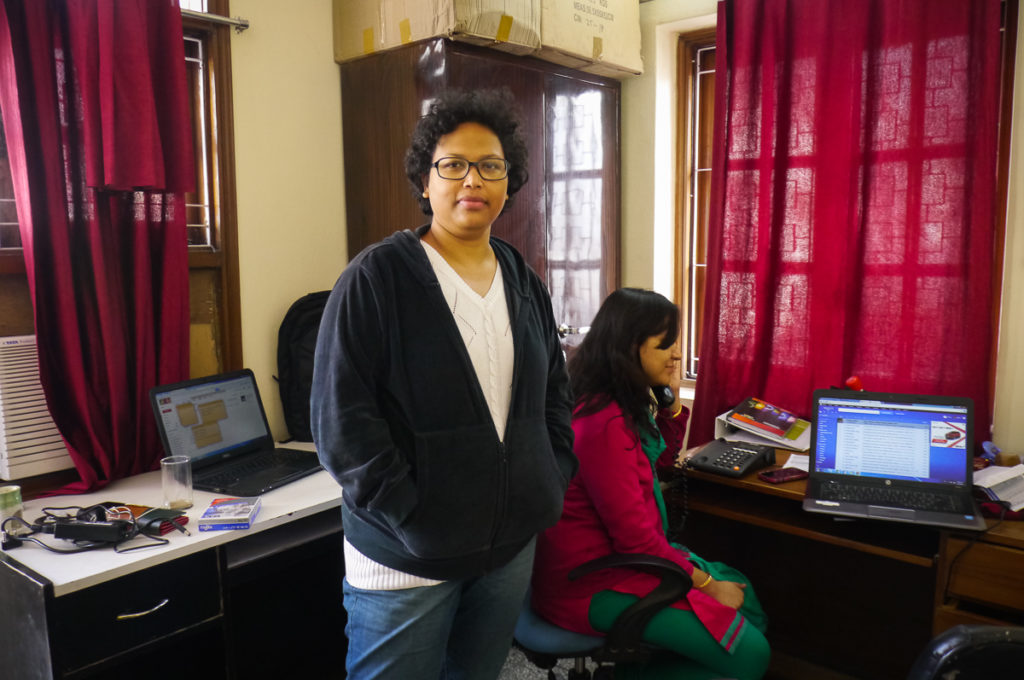 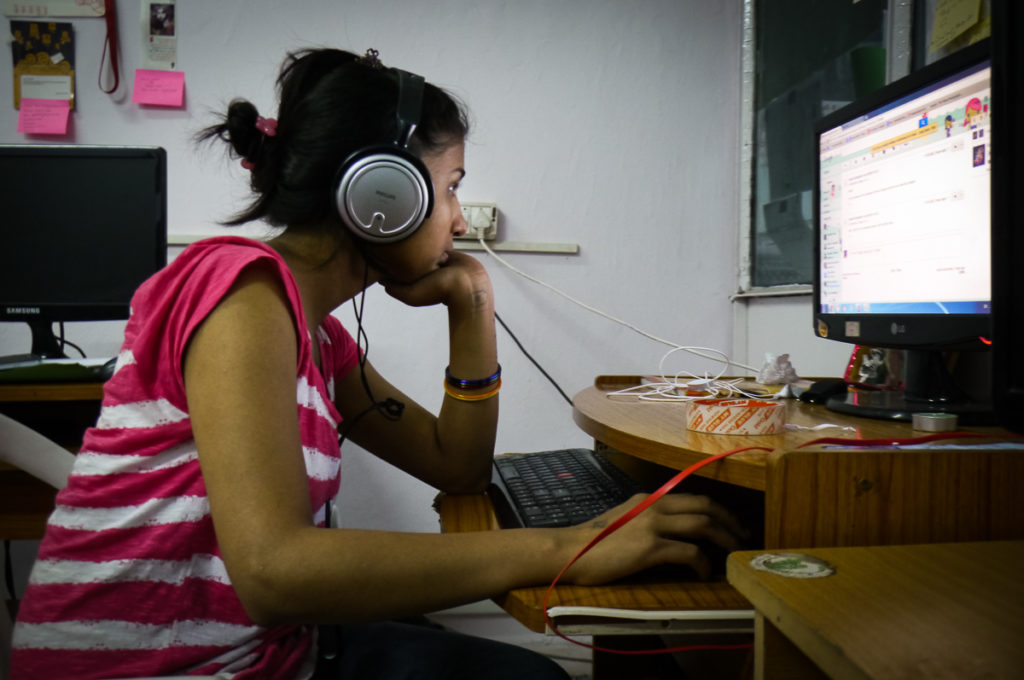 Renu Arya, 21, an alumna intern at Feminist Approach to Technology, is involved in theater, filmmaking, editing and photography. Nowadays she is teaching FAT students to use different media to tell stories of early marriage. 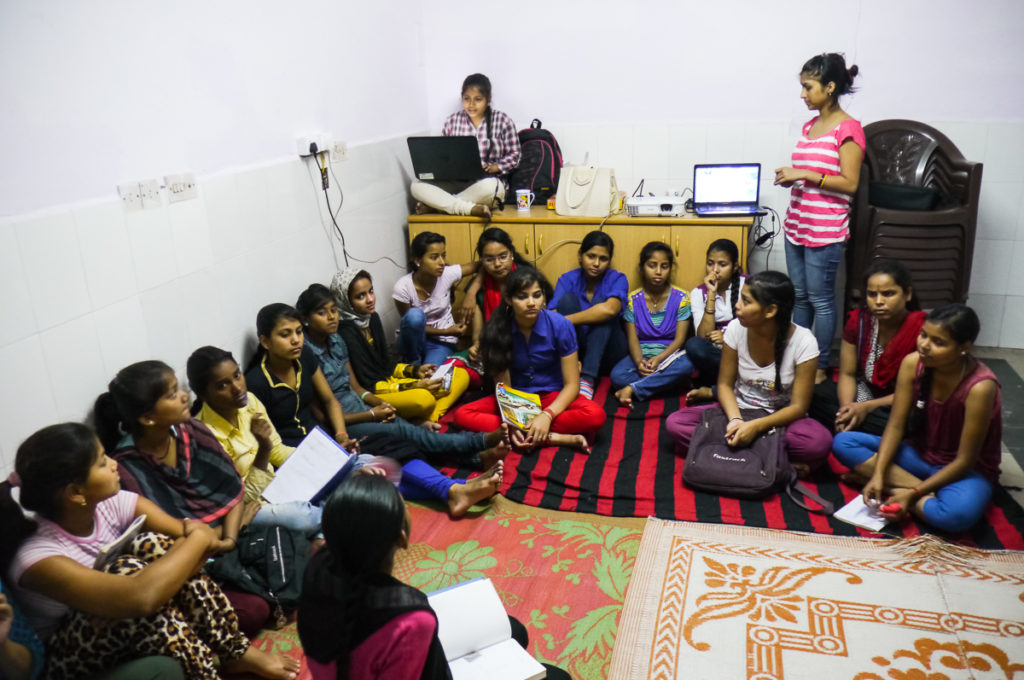 In a classroom at Feminist Approach to Technology, alumni intern Renu Arya (in striped shirt) chats with students about how various forms of media can be used to communicate powerful messages. 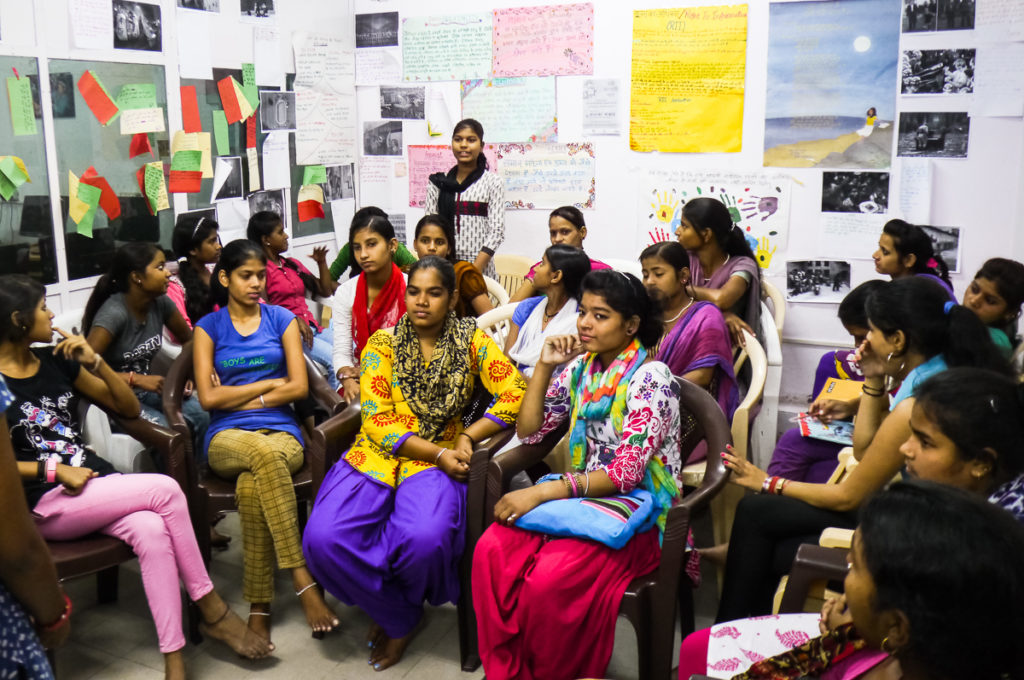 During a theater class at Feminist Approach to Technology, students discuss the need to raise awareness of child marriage, which is widespread in India despite a legal ban. 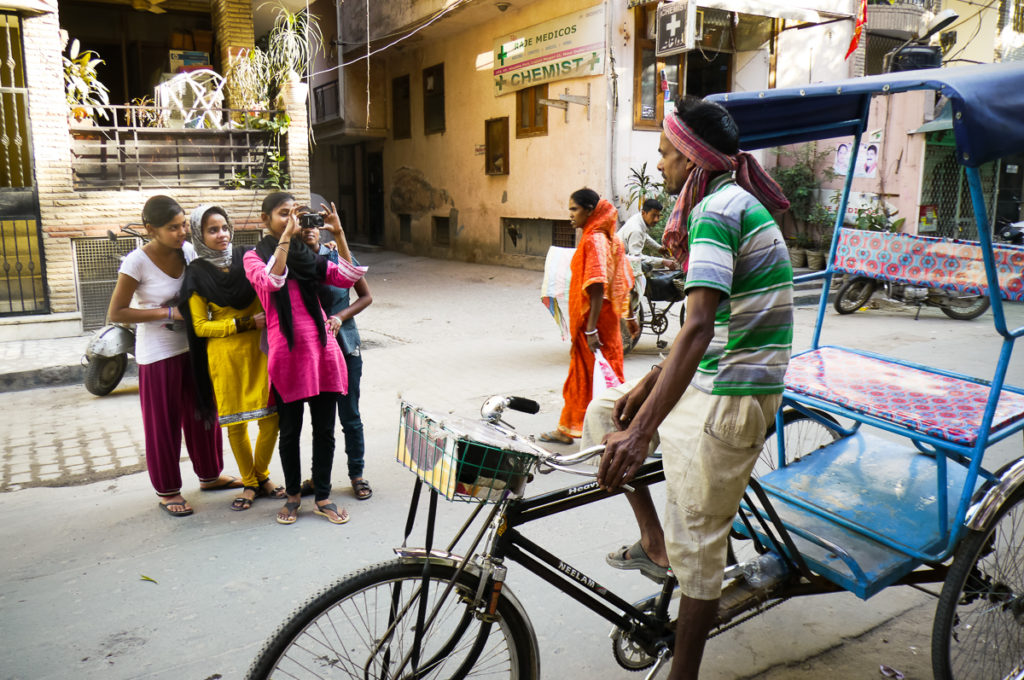 After taking a beginning photography class, students practice using a digital camera outside the Feminist Approach to Technology center at Lajpat Nagar in New Delhi. FAT, founded by Gayatri Buragohain, teaches underprivileged young women how to use computers and media equipment. 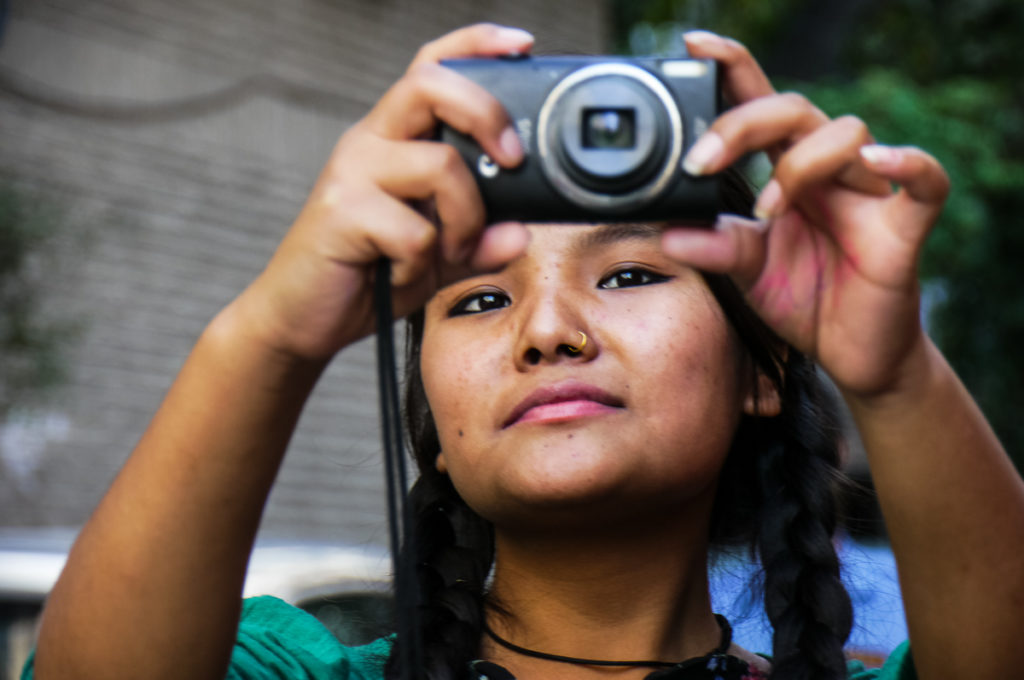 Umma Magar, 16, a student at FAT, practices using a digital camera outside the FAT office at Lajpat Nagar in New Delhi. Magar says she is passionate about learning photography; she wants to use her photography skills to raise awareness of social ills such as child marriage.

Buragohain served as India’s ambassador to the Association for Computing Machinery Committee on Women, a U.S.-based association that advocates for women in computing, in 2010 and 2011. Buragohain also won the Change Award from the U.S.-based Anita Borg Institute in 2010 for her work promoting women’s participation in technology.

In her latest program, Buragohain instructs young women to undertake projects addressing taboo social issues in the slums where they live. She and the students chose the focus of the inaugural class.

Rekha Yadav, 20, has been training at the center since 2013 and is participating in the new project.

“My parents would always insist that I should marry,” Yadav says. “There was not a single day when I would not be told that education can wait but marriage cannot.”

Previously, Yadav’s parents did not support or encourage her to pursue higher studies, she says. But since she joined the center, which counsels parents on the importance of education and technology, they have permitted her to continue her higher studies. She is now in the second year of a three-year bachelor of arts program at Kamala Nehru College in New Delhi.

“I had never thought the delay of marriage would open a new door of my life,” Yadav says. “Now, I feel like a free bird who can freely fly and wish to become anything in life with hard work and confidence.”

Last year Feminist Approach to Technology surveyed 300 New Delhi students in grades six to 10 to determine why so many girls avoid STEM classes. One reason it found is that poor families tend to marry off daughters at an early age rather than investing in their education, Buragohain says.

Parents in these families prefer to invest in their sons’ education because, by custom, they will share in their sons’ earnings while daughters’ earnings go to their in-laws, Buragohain says. STEM occupations generally require more years of study than traditional female professions, such as teaching, demanding a greater monetary investment.

According to a 2014 UNICEF report, 43 percent of Indian women ages 20 to 24 had been married by age 18. India has the second-highest rate of child marriages in the world behind Bangladesh.

Under the Prohibition of Child Marriage Act of 2006, the legal age for marrying in India is 21 for men and 18 for women. Nonetheless, India alone accounts for one-third of girls married before 18 globally. It is a land of many cultures and religions, and some Indian communities arrange and sanctify early marriages despite the legal prohibition.

Buragohain’s class is in the first phase of a two-year project. First, the students are learning about early marriage and how to use mobile phones, computers and cameras. Then, they will go out to report on the topic in their communities. Finally, they will present their work through various media, such as skits, photos and videos.

“Buragohain is an inspiration for the underprivileged girls who want to amplify their voices against various social problems rather than to suffer silently,” Neyazi says.

Buragohain opens channels of communication with her comical nature, Yadav says. Cracking jokes in class, she keeps the environment lively, puts her trainees at ease and forges personal connections.

“Women like Buragohain can encourage more girls to pursue their own interest in technology,” she says. “There will be less discrimination. It won’t be considered unusual for women to pursue tech careers.”

Shivani Gupta, a program associate for Feminist Approach to Technology, calls Buragohain an innovator with a solution to every problem. Her positive attitude in the face of challenge always makes a difference, she says.

“She always encourages us to be confident in our roles and break gender barriers without doubting our own capabilities,” Gupta says.

Buragohain hopes her trainees will bring a feminine consciousness to the technology field.

“We want to help the girls at the center to create technologies that would enhance their lives with equality,” Buragohain says. “The inventor should specifically create technologies while keeping women into consideration rather than the general consumer.”

Men dominate technical fields, and they tend to cater to male consumers, she says. Women continue to be mere recipients of technology – and they generally purchase home appliances rather than technologies that meet other day-to-day needs.

“I have a dream that the girls should tomorrow be able to create women-centric technologies,” she says with a smile. “I am hopeful the day is not too far.”

Buragohain is looking for more donors to achieve her target of $10,000 for the early marriage project. To date, four international organizations have contributed a total of more than $8,000.

The class will begin the second phase of the project in July, Buragohain says. After this project, she plans to tackle a different topic with a new class.

Buragohain aims to help her trainees find their inner compasses and the strength to face any challenge. Only then can they live free lives, she says.

“I want my girls to always fly,” Buragohain says. 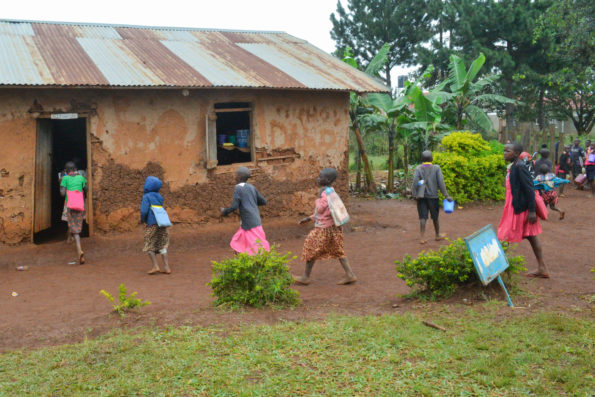