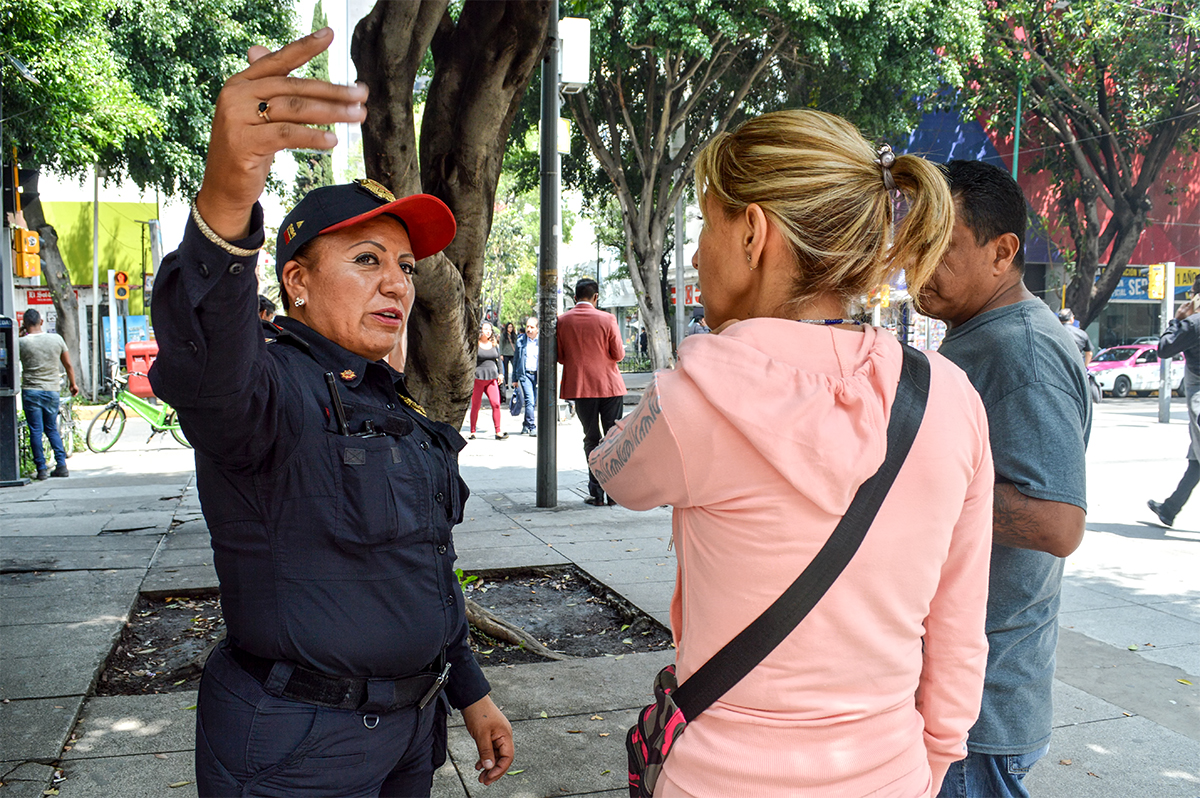 MEXICO CITY, MEXICO — Everything that happens on the main avenues of this capital city is transmitted, 24 hours a day, to a bank of television screens in a police building’s basement office.

Blanca Denisse Vizuet Chávez is the police officer who sits in front of those screens, watching the goings-on and handling emergency calls. She’s been an officer for four years.

“I’m the one who sends support to whom and to where,” she says.

A few years ago, it’s likely that a man would have been sitting in Vizuet’s chair. The number of women in one of Mexico City’s supplementary police forces has doubled in the past five years to about 1,600, says David Vázquez, the superintendent of the Policía Bancaria e Industrial, Mexico City’s banking and industrial police force that provides public and private security to businesses in the city. 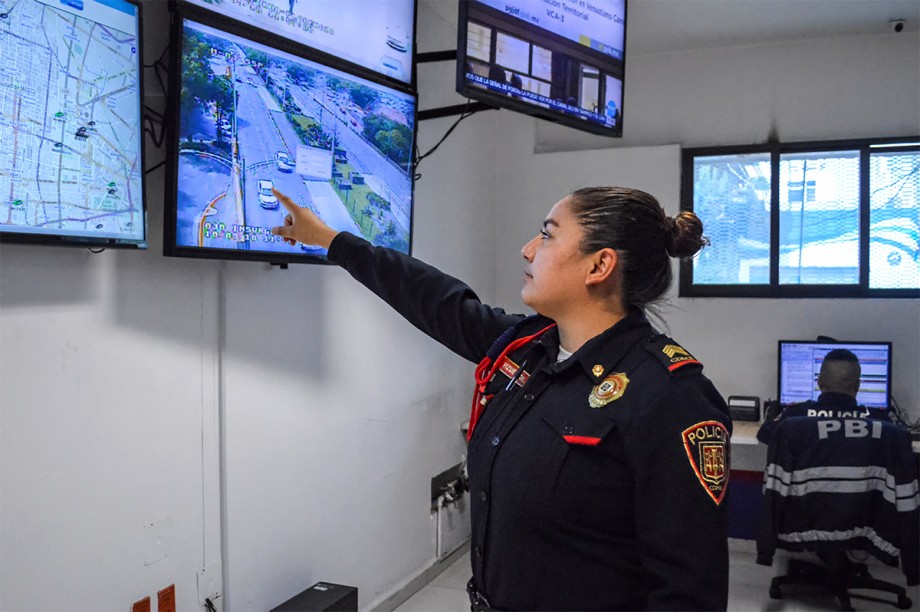 As of December 2017, there were about 45,000 officers in the division. They’re known locally as “bancarios.”

More of the companies that use police security services are asking for female officers, Vázquez says. Department stores often want women to deal with shoplifters, who tend to be women, he says.

Women are taking more jobs across the policing sector, he adds.

In general, women in Mexico are less likely than men to take formal jobs, which makes the increase of women in the police sector all the more notable. Just 47 percent of women in Mexico are part of the formal workforce, far below the average in OECD countries of 67 percent of women, according to 2017 OECD data measuring workforce participation in 36 countries, including Mexico. Chile and Colombia are the only other OECD member countries in Latin America.

The female bancarios in Mexico City are among the women who are raising that average.

Rosaura Reyes Jacobo says she worked as a guard at the entrance of a department store, where she watched for theft, helped lost children and performed other safety-related tasks. After a year, she was promoted to supervise the closed-circuit cameras for all the stores in the chain.

“I look to learn about everything, even though sometimes it’s a lot and it’s complicated,” Reyes says. “But I like it.”

Officers in this division don’t handle the major crimes that tend to dominate headlines in Mexico, but they’re still considered part of the larger force that is viewed warily by many Mexicans. One survey conducted in 2017 by the Mexican government found that 37 percent of respondents felt “a lot” or “some” confidence in state police. Nearly 90 percent of those surveyed viewed certain police agencies as corrupt.

Reyes says that public perception of police officers is why she hid her job for five years from her youngest son, who is now 6 years old.

“I told him that I was selling cellphones at a department store,” says Reyes, who has been an officer for eight years. “I wanted to handle that part, in order to avoid him getting bullied.” 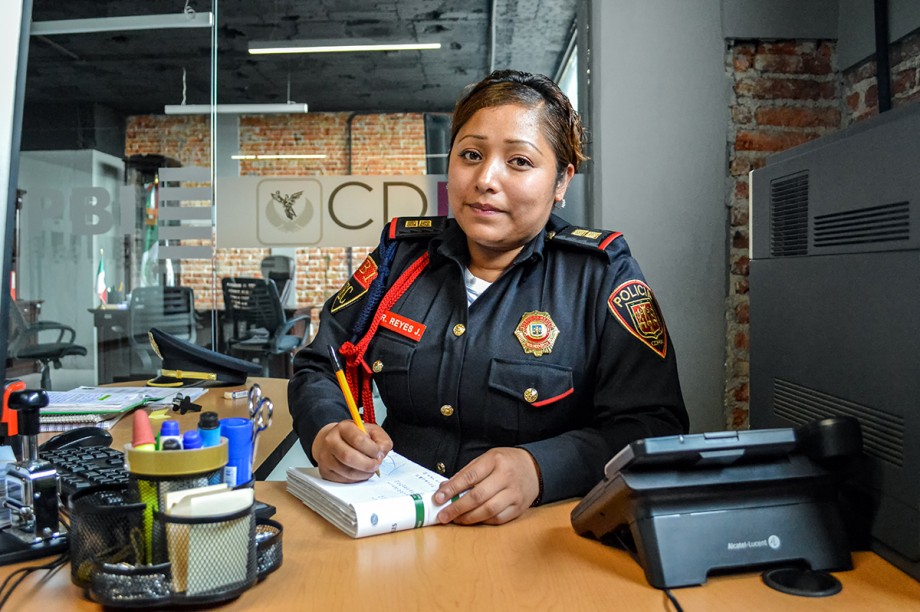 Rosaura Reyes Jacobo has worked for eight years as a “bancario,” a police officer in Mexico City with the division that handles public and private security. She says she loves her job but hid her profession from her youngest son, because police officers aren’t always viewed favorably in Mexico.

Karina Mancilla Montellano says she joined Mexico City’s bancario division force 15 years ago because she wanted to serve, protect and help the public.

“When I started, there were less women, but we excelled more,” Mancilla says. “In some things, we have more ability. We’re there in every moment, regardless of the risk. There are times we do things more easily than the men.”

She says she remembers one time when her safety was at risk. While pursuing two armed people, one attacked her and squeezed her throat, she says. She managed to overpower him and had him in handcuffs by the time other officers arrived, she says.

“In these moments, you forget your family. We’re interested in the work. If I hadn’t been able to detain the subject, he could have hurt more people,” Mancilla says.

Mancilla is now the deputy director of the procedural police sector, where she guards people in custody as they move between courtrooms and prisons. She supervises 756 people, including men and women, she says.

Whenever another officer has treated her differently because of her gender, she focuses on being smarter than that person, she says.

“It’s what bothers them the most, because they can’t achieve their objective of making me feel bad for being a woman,” Mancilla says. “Many of them can’t accept that a woman gives them orders.”