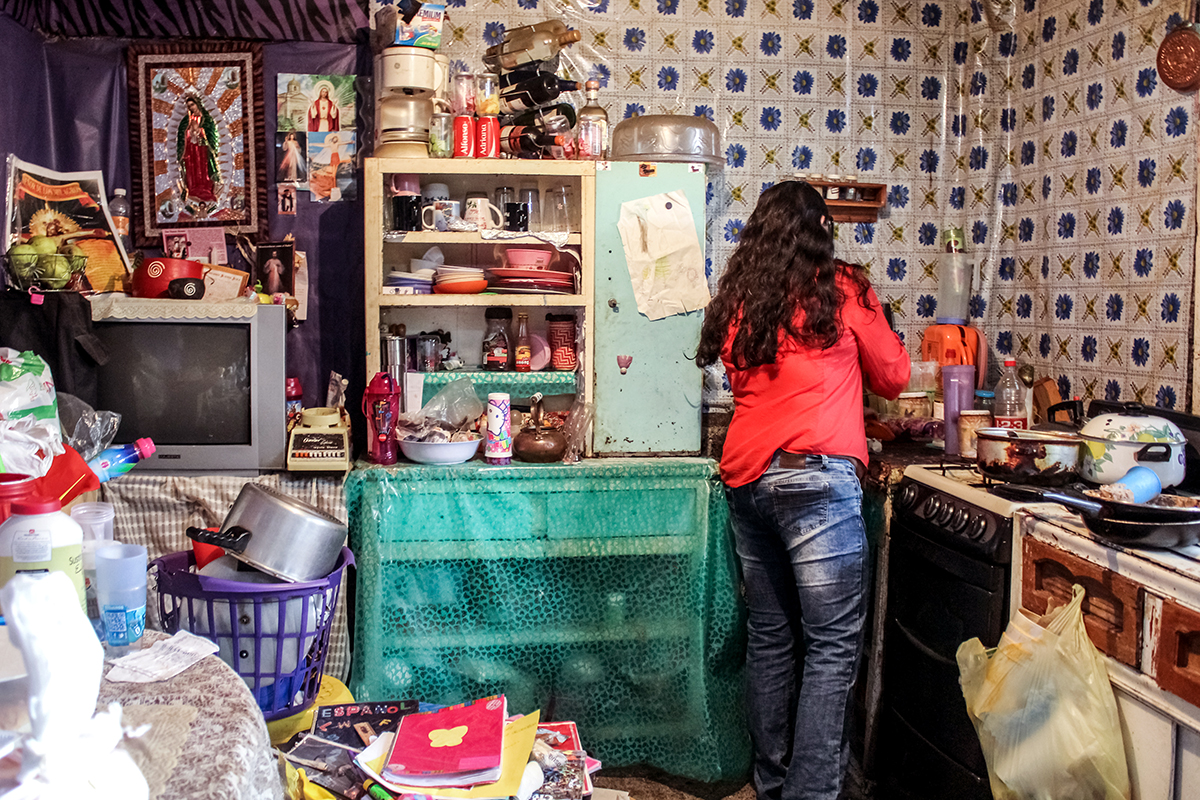 MEXICO CITY, MEXICO – A.M. didn’t know the rule about underwire bras when she visited her husband in prison the first time.

Those flimsy, u-shaped pieces of metal aren’t allowed in Reclusorio Preventivo Varonil Oriente, one of 10 prisons in Mexico City.

A guard searched her and found it. But she didn’t tell her to take it off or leave the prison, she says.

A.M. gave her 10 Mexican pesos (about 50 cents), she says, and she let her through. (A.M. asked that only her initials be published, to protect her husband’s identity.)

That day, she also paid 10 pesos to a guard who checked the food she carried and 20 pesos (about $1) to a guard who gave her a visitor’s pass. She paid to sit at a table and paid to warm up the food she brought for her husband. She even paid inmates to notify him that she’d arrived.

Her husband has to pay bribes, too, so A.M. brings 300 pesos ($16.16) or more for him every time she visits. He in turn hands over 5 pesos (25 cents) to guards at each of his three daily roll calls, and he pays 50 pesos ($2.70) every week, ostensibly to keep the electricity on in his cell, and another 50 pesos to access water – both fees that go to an inmate who controls the cell. If he fails to pay, he’d likely face violence or other consequences, A.M. says.

All told, A.M. says she sometimes spends up to 800 pesos (about $43) on each visit, including transportation to and from the prison and all the money she spends while she’s there. When she can’t visit, she sends money so her husband can pay the bribes demanded of him.

“Like my father says, ‘Let’s go to the fair, because it’s a spending spree,’” she says. 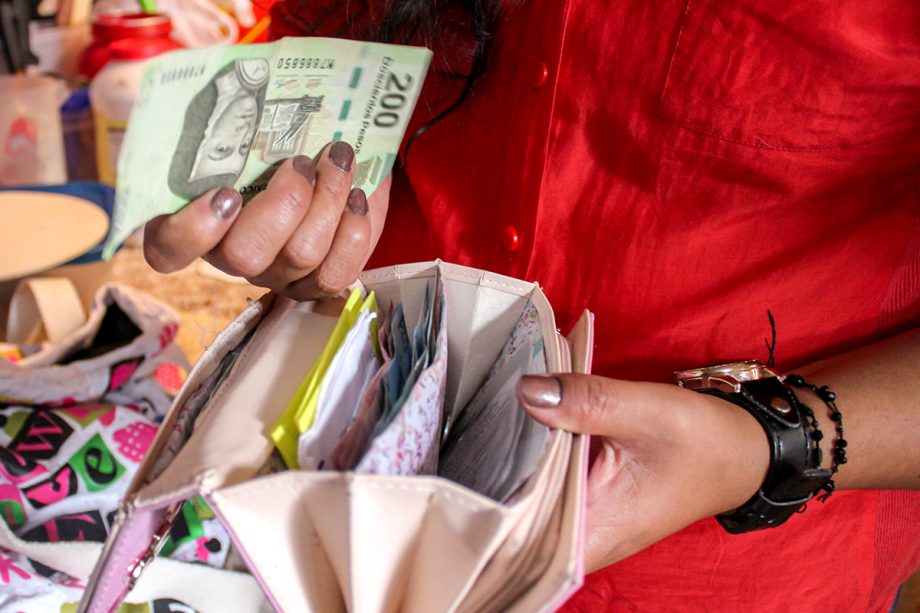 A.M. counts the money in her wallet before she visits her husband at Reclusorio Preventivo Varonil Oriente, where he’s serving a seven-year sentence for burglary. A.M. says she doles out up to 800 Mexican pesos ($43) every time she visits. She uses some of the money to travel to the prison and to bribe guards herself, and she gives the rest to her husband, who has his own bribes to pay.

There are signs posted that say bribes aren’t allowed. But prison guards make it clear that no one gets past without paying a price, A.M. says.

Mexico’s prison system is notoriously corrupt. When drug trafficker Joaquín Guzmán Loera, known as El Chapo, escaped twice – in 2001 and 2015 – from maximum-security prisons, the guards and prison administrators there were widely accused of colluding with him. In Coahuila, a state in northern Mexico, the Los Zetas drug cartel controlled a prison and used it to torture and kill its adversaries and kidnapping victims.

Those are the types of stories that gain notoriety around the world, making many outsiders perceive Mexico as a country rotten to its core.

Ordinary Mexicans have little to do with those incidents.

But when a friend or family member goes to prison, those ordinary Mexicans, however innocent, are pulled into a system that forces them to engage in corruption.

“Now you ask me: ‘Are you corrupt?’ Today I can tell you: I play in the game of corruption, and not because I want to, but rather because life in this way is making us play,” A.M. says.

Bribery in the prison system is widespread and chronic, according to data gathered by the Instituto Nacional de Estadística y Geografía, the national institute for statistics and geography. Last year alone, about 21 percent of the country’s roughly 211,000 prisoners said their visitors had to bribe at least one person. That data, with in-depth statistics about the scope of corruption in the prison system, is the first of its kind.

Most payments were to enter the prison, to notify the prison that a visitor had arrived or to allow food, clothing or personal items into the prison. About 85 percent of those payments were made to guards, according to the report.

As for the prisoners themselves, about 22,000 said they’d been forced to pay money for basic services, such as access to drinking water, appliances or going outside to a courtyard.

Nearly all – 94 percent – the prisoners who said they had experienced corruption also said that they didn’t report those incidents, usually because they feared reprisals, believed it would be useless or considered bribery a common practice.

Mexico City has the highest number of prisoners of any area in the country, and the prisoners there experience corruption at about two times the rate of prisoners elsewhere. The data, published in July of this year, is the first data from the national statistics institute to include information about corruption in prisons.

“There are complaints, but that doesn’t mean they happen,” he says.

Ruiz Ortega says his internal comptroller is notified every time an inmate or prison visitor reports bribery, and he adds that he responds to any complaints that are reported by the news media or presented to the Comisión de Derechos Humanos del Distrito Federal, the city’s human-rights commission.

Ruiz Ortega’s office did not respond to GPJ’s request for the total number of complaints that either he or his comptroller have addressed. According to data provided to GPJ after GPJ filed a public-information request, the Contraloría General de la Ciudad de México, the agency that oversees and evaluates public servants, documented 13 complaints and reports between 2007 and 2015 related to corruption in the prison system.

All of the reports and complaints were investigated, and 12 of them were dismissed on the grounds that they were “improcedentes,” meaning that they were unfounded. A sanction was imposed in the single remaining case from those nine years.

Ordinary Mexicans, however innocent, are pulled into a system that forces them to engage in corruption.

There’s broad evidence that corruption in the prison system is much more widespread than the small number of cases handled by the Contraloría suggests.

In January, a national television station broadcast a series of videos secretly recorded inside Reclusorio Preventivo Varonil Norte, another Mexico City prison overseen by the undersecretary. Those videos showed guards charging inmates bribes at roll call, beating inmates who didn’t pay up and charging for the sale of drugs. Prisoners were shown colluding with guards, selling drugs and engaging in other illegal activities.

After the videos were broadcast, Patricia Mercado Castro, Mexico City’s secretary of government who oversees the division that runs the penitentiary system, announced an investigation and said the public servants involved would be dismissed. Three public servants were ultimately dismissed, and the head of the prison resigned.

The prisons “are a reflection of how the overall system works in Mexico,” says Karen Silva Mora, a researcher with México Evalúa and with CIDAC, a pair of think tanks that work on the Mexican justice system, among other issues.

Approximately 51 percent of Mexicans surveyed said that they had paid bribes to receive a public service in the previous 12 months, according to a survey published in October by Transparency International, a global nongovernmental organization that fights corruption. The percentage was the highest among the 20 Latin American countries surveyed.

But prisons are more prone to corruption, Silva Mora says, because of overcrowding and other indicators of poor living conditions. Prisons often have unhygienic conditions in bedrooms, kitchens and dining rooms, among other problems, according to the national human rights commission.

“As the government is not able to provide these basic conditions, the [prison] authorities take advantage to offer it as a privilege within prisons,” says Silva Mora.

Prisoner advocates are hopeful that a June 2016 law, known formally as the Ley Nacional de Ejecución Penal, which sets guidelines for incarceration including requiring humane treatment of prisoners, could be a way for prisoners to safely report corruption. The law hasn’t been fully implemented, but once it is, civil-society organizations and human-rights groups will be able to petition authorities on behalf of inmates in regard to prison conditions.

Under this law, the identity of an inmate who wants to report acts of corruption can be protected, says Layda Negrete, a criminal-justice researcher.

The law stipulates a period of four years for its implementation. So far, actions to get it going have been almost nil, says Silva Mora, the México Evalúa researcher.

I play in the game of corruption, and not because I want to, but rather because life in this way is making us play.— A.M., who regularly bribes guards to see her husband in prison in Mexico City

For A.M., there’s no option but to keep bringing money to her husband, she says. She fears that other inmates and guards could hurt him if he doesn’t pay them, she says.

He was arrested in August of 2015 and was later found guilty of burglary. He’s serving a seven-year sentence.

A.M. wants her husband to get a job within the prison – some make handicrafts to sell, and some work as cleaners or kitchen staff – but he told her that he needs to bribe someone as much as 5,000 pesos ($270) to get one. Instead, he does laundry for other inmates, who pay him 1 peso (0.05 cents) per garment.

The only solution is a widespread refusal by Mexican society to accept corruption, A.M. says.

“We need everyone to say no. But everyone, so that there won’t be a single one who would pay a peso. Not one, not one, not one,” she says. “That’s how corruption would be finished.”

At first, she visited three times a week. Then it was once a week, then once every two weeks. Now, she tries to visit once a month, but that happens less frequently. She’ll continue to visit him – and pay bribes – until she has nothing left.

“What little we had saved, and what little the family helped us with, it’s all gone,” she says.