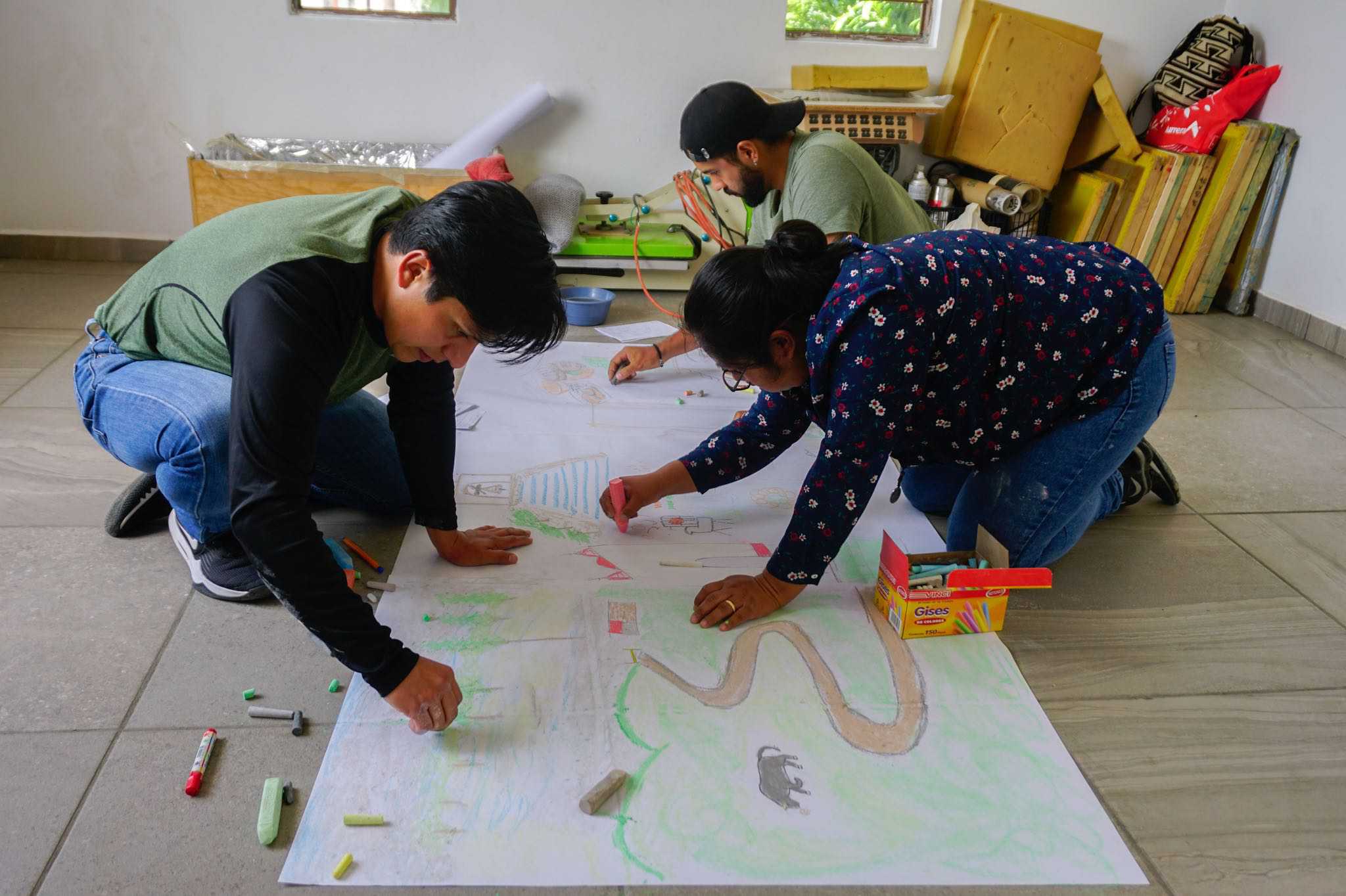 SAN PABLO ETLA, MEXICO — Alejandro Valdez moved with his parents to the outskirts of San Pablo Etla, a municipality near the city of Oaxaca de Juárez, when he was 11. He remembers feeling lost, not sure where to play or with whom, unmoored in a new neighborhood with few ties to the local community. As an adult studying for his master’s degree in communal recreation at the Universidad Autónoma Comunal de Oaxaca — the country’s first officially recognized university created and led by indigenous people — he channeled that sense of displacement into his university project: a space where locals could play sports.

Community is the focus of the Universidad Autónoma Comunal, which was authorized as a degree-awarding institute by the state of Oaxaca’s legislature and received accreditation in 2020, the result of long-standing pressure from local indigenous communities. The university’s first class of master’s students under this accreditation will graduate this year. “The Universidad Autónoma Comunal is something indigenous communities have demanded for a long time,” says Rigoberto Vásquez, the university’s academic coordinator. “Our request has been as indigenous people to offer a third education option — in addition to the public and private options offered by the Mexican system — that’s geographically close to our communities and that’s been created by us from a communal perspective.”

Twenty years ago, some communities began offering education in their own villages — but when people finished their studies, they found themselves in limbo, their education unrecognized outside their own community. “So we decided to unite the different ongoing efforts in different Oaxacan communities, to request in unison official recognition of our studies,” Vásquez says. “We wanted our students to finish their studies and obtain a certification, as at any other educational institution.”

In Oaxaca, according to 2015 data from the National Institute of Statistics and Geography, just 0.9% of people aged 24 or older who speak an indigenous language have completed three years or more of higher education. (At the national level, this figure rises slightly to 1.1%.) For a college-aged indigenous person to access higher education, they must typically move away from home to live near campus, generating costs that their families often cannot afford. Moreover, Vásquez says, the free public education offered by the state is almost entirely in Spanish and totally lacks a communal orientation.

The Universidad Autónoma Comunal — comprising 16 centers in communities belonging to the 16 different indigenous groups in the state, rather than a single centralized campus — encourages students to make connections between the classroom and their communities, Vásquez says. Degree options include communal agroecology, communal management, indigenous law and communal communication. In a first for the country, the curriculum was designed entirely by indigenous people rather than mandated by the Mexican education ministry. Students pay a nominal fee per semester, and many teachers provide their services for free, while community members help with upkeep through tequio, a long-standing tradition of communal labor. There are no grades — instead, students present their projects to the community assembly, the primary decision-making body in indigenous-administered municipalities, for appraisal and approval.

“It was the most beautiful thing; everyone was equal,” says Sore López, who studied communal communication at the university center in the town of Santa María Tlahuitoltepec, before it was formally incorporated into the university. She now works at a local radio station, where she encourages the use of Mixe, her native language. “And whenever we propose a project, we base it on its contribution to the community, not just to ourselves.”

The centers offer degrees catered to the circumstances of each community, says university rector Jaime Martínez Luna. When the university was created, Vásquez says, a decree established its autonomy. “This independence is an important accomplishment,” he says. “Our communities finally have the autonomy to administer their own education.” In late August 2021, however, the Mexican Supreme Court ruled that the university’s charter would be revoked unless the state legislature held the requisite consultation with all the indigenous groups in the area. (It has until March this year to do so.) 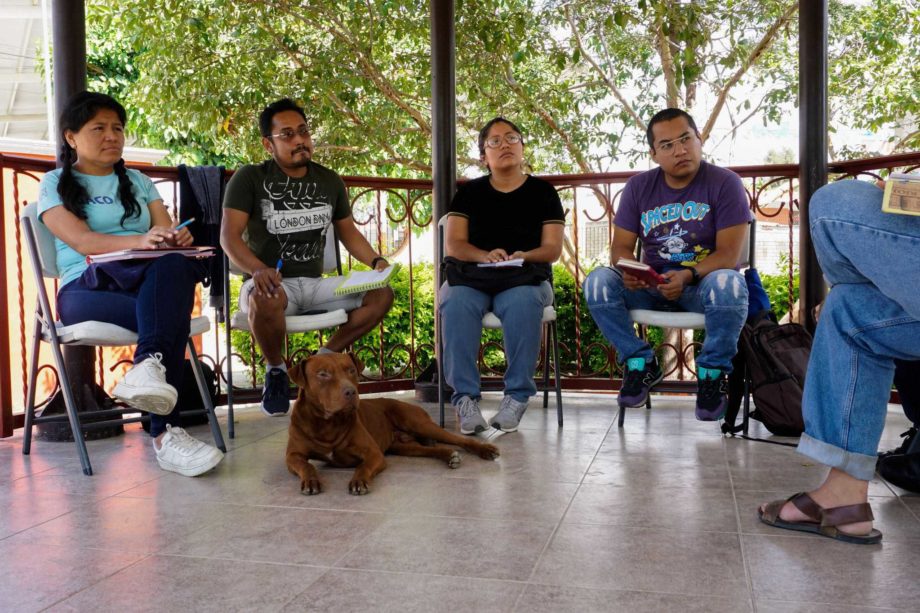 Representative Juana Aguilar, president of the Comisión Permanente de Educación, Ciencia, Tecnología e Innovación, the Oaxacan legislature’s education, science, technology and innovation commission, says the state government would carry out the consultation before the deadline. She also notes the dearth of education options for young indigenous people: “The Universidad Comunal represents, besides a way to guarantee higher education to those who don’t have the opportunity to obtain it outside of their places of origin, the recovery and preservation of community wisdom.”

Valdez realized during his master’s program what it means to live in a community: that you belong to the land, it doesn’t belong to you — an ethos long held by indigenous communities. Admission to the university is not restricted to members of these communities, however; Valdez, for instance, does not identify as indigenous. The principles imparted during his education hold universal relevance, he says. “It made me incorporate respect for our planet in my work and taught me to work laterally with everyone around me,” he says.

Isabel Guzmán was a nurse practitioner for several years before she decided to pursue a degree in communal studies. “I apply the tools that I am learning to my daily life,” she says. “I have learned to maintain a dialogue with my family. If something is not working for us, we analyze it, we talk about it and see where we are failing, and we try again so there is no more frustration, only ideas we come up with together and arrive at solutions.”

Nearly three quarters of the 570 municipalities in Oaxaca state are governed by indigenous customary law, a political system known as “usos y costumbres,” and at least 76% of the land is communally owned. In his studies, Valdez learned how these communities make collective decisions: through an assembly, comprised of the heads of each family. The municipality of San Pablo Etla is governed by customary law, but the outskirts — where Valdez lives — are not. As he works on his university project, to create community through sports among the 281 families in the neighborhood, he takes care to implement the principles of collective decision-making.

“We started by deep-cleaning the fields, built in 2015 and then abandoned, so that we could offer football classes to boys and girls, then we set up volleyball nets for young people and adults,” he says. “These last classes have been a great success — neighbors who did not know each other now have a close relationship.” The story that moves him the most is of a quarrelsome old man with a drinking problem who constantly fought with his neighbors. “Now, he is the first to arrive and has stopped drinking.”

More than 50% of indigenous students who graduate high school move out of their communities, Vásquez says, so the university is designed to strengthen their connection to their community and help reduce migration rates. “We see issues related to the communities — for example, how other communities are suffering from dispossession of territories, mining concessions,” says López. “We see that the community experiences many problems that we, as students who studied in the past in official institutions, did not get to see and, on the contrary, we contributed to them.”

Such degree offerings are especially important in the age of climate change. “In the territory and communal property major, students are taught about the cultural, patrimonial, biological and intangible defense of what we call territory,” says Natalia Jiménez, general coordinator of the Santa María Tlahuitoltepec center. “That is, the conscious use of what we find in our territory.”

Margarita Velasco is pursuing a master’s degree in communal recreation at the university center, located in the Valles Centrales de Oaxaca, the state’s central valleys; before, she worked as a middle school teacher. Her project explores the revival of Zapotec dances, such as those performed during the planting and harvest seasons. “I’m from San Andrés Solana, a community where there’s a lot of migration,” she says. “Festivals unite us, and young people who live in other places come to dance here. I want them to have a sense of belonging.”

López, who grew up listening to commercial radio stations beamed into her community from the city, thought she would become a Spanish-language announcer, just like the ones she heard on the airwaves. Now, she writes radio stories in Mixe. “It changed the way I think about communication,” she says of her time as a student. “Even though I’m from here, I never really understood what it meant to live in a community. I learned very important things, not leaving my culture behind, not feeling ashamed of it — quite the opposite, actually.” 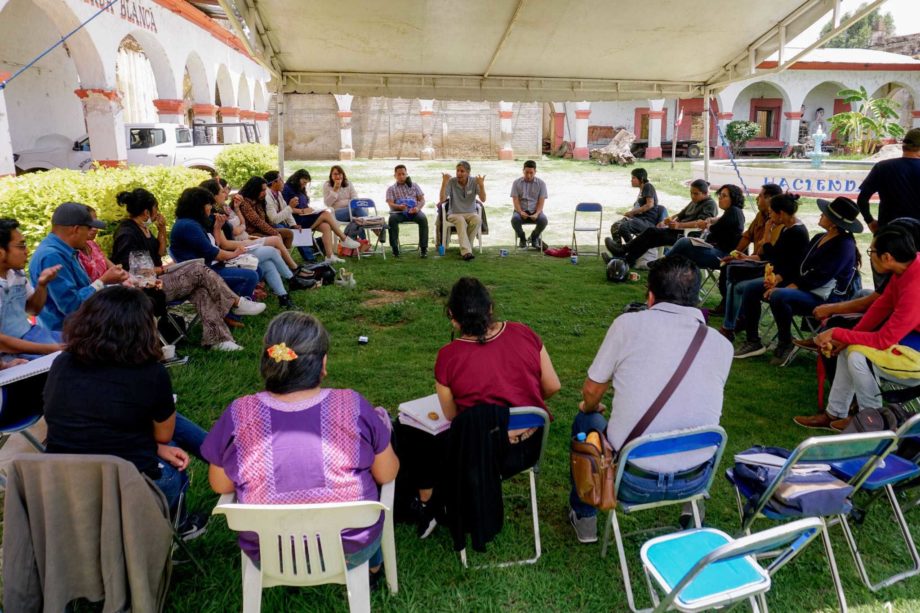 Ena Aguilar Peláez is a Global Press Journal reporter based in Oaxaca, Mexico.