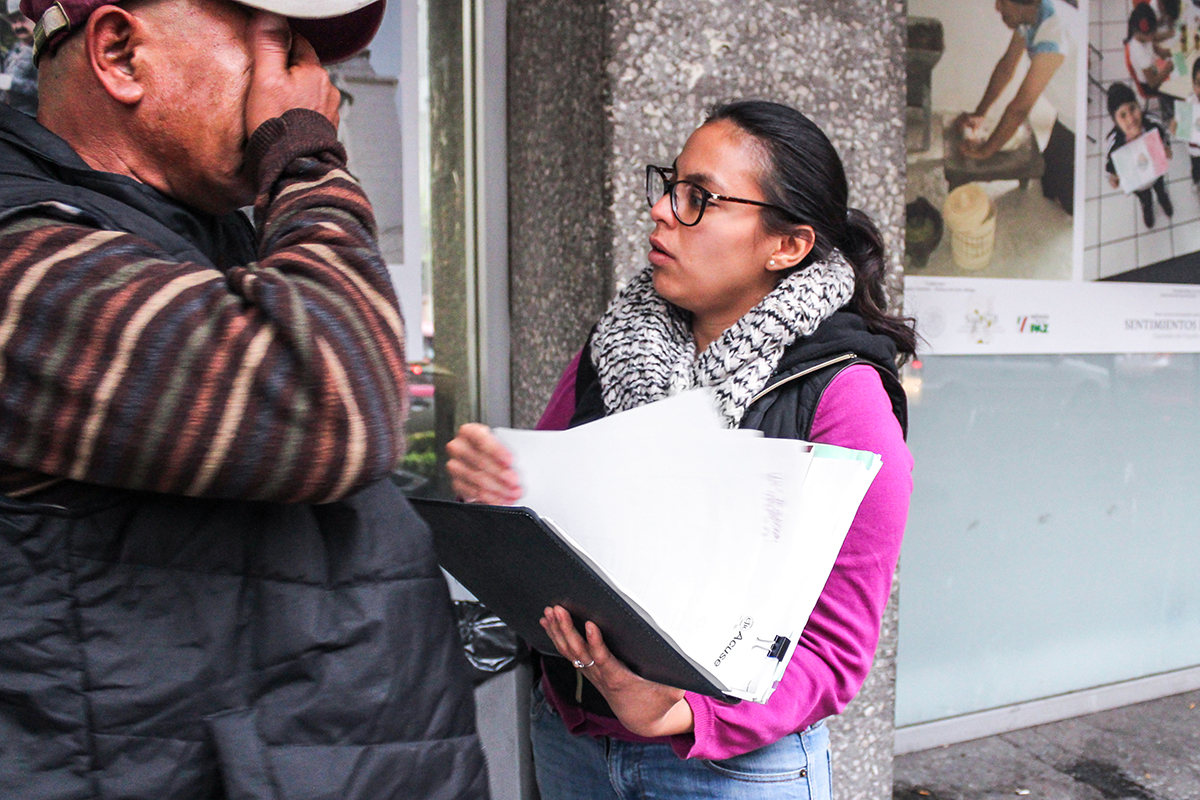 MEXICO CITY, MEXICO — J.R. tries to remain unemotional, but he is bewildered. He brings his big, rough hands to his head and covers his face, rubs his eyes. His petition to remain in Mexico as a refugee has just been rejected.

J.R., a weathered 49-year-old, stands outside the offices of the government’s Comisión Mexicana de Ayuda a Refugiados (COMAR), which handles refugee petitions, among other things. But he’s not alone. Unlike nearly 90 percent of the other refugee applicants in Mexico, J.R. has expert help.

Edith Mei Lai Cuan Corpus, a young, candid lawyer assisting J.R. that day, calmly explains that he can appeal the decision with COMAR, or that he can take the case before a judge, a strategy that has worked twice before for the legal team at Clínica Jurídica para Refugiados Alaíde Foppa, the clinic at Universidad Iberoamericana where Cuan Corpus works.

INSIDE THE STORY: For her latest story, reporter Mayela Sánchez tracks a new trend of legal aid in Mexico for refugee applicants. The trend started at migrant shelters, which are often the only point of contact for people who aren’t aware that they can even apply to become refugees. Read the blog.

J.R. strains to focus on her words. He’s overwhelmed. He doesn’t decide right away how he’ll proceed.

In the past, just a small minority of refugee applicants in Mexico have had legal representation, but that is changing as the number of applicants surges.

Nearly 14,000 people sought refugee status in Mexico from 2013 to 2016, according to COMAR’s statistics – a rapid uptick over previous years. Most of that increase occurred between 2014 and 2016.

Complementary protection is granted to people who are not technically refugees but whose lives have been threatened. That protection has been an option since 2011, when Mexico enacted the Ley Sobre Refugiados y Protección Complementaria. Commonly known in English as the Law on Refugees and Complementary Protection, it also guarantees refugees’ rights to receive health services, education and other benefits.

UNHCR expects that more than 22,800 people will apply for asylum in Mexico in 2017 alone, and that 11,528 of those applicants will have their requests for refugee status or complementary protection granted, pushing the country’s total refugee population to about 17,500.

Ongoing violence in Latin America is a root cause of this mass migration, but the increase in refugee applications is linked to serious efforts by aid agencies, including UNHCR, to educate people on the move about their options.

“It’s hard to travel in parts of southern Mexico without seeing posters from UNHCR saying, ‘You can be a refugee,’ and laying out legal rights,” says Maureen Meyer, a senior associate for Mexico and migrant rights at the Washington Office on Latin America (WOLA).

Latin American borders are generally porous, with people moving back and forth with relative ease. Foreigners who wish to apply for refugee status in Mexico are required to be present in the country.

But once refugees are in Mexico, their advocates say, they’re vulnerable to exploitation as they try to build a new life. They can have trouble finding the legal representation they need to push their cases forward.

“When you’re a foreigner, that implies a certain vulnerability in the system, because you don’t know the laws,” says Elba Coria Márquez, the director of Clínica Jurídica para Refugiados Alaíde Foppa, the legal clinic at Universidad Iberoamericana, founded in May 2016.

The term “refugee” generally describes someone who is fleeing a dangerous situation. In the U.S., an applicant for refugee status must prove that he or she faces a personal threat of violence or persecution. Mexico’s law echoes the UNHCR definition that a refugee is anyone fleeing widespread violence or persecution. (Mexico’s benchmarks for political asylum are considered separately.)

It’s not necessarily easy to get formal refugee status in Mexico, but refugee applicants have a lower bar to meet there than in the U.S., Meyer says.

Between January and June, 42 percent of the people whose applications for refugee status went through the full process were approved, according to COMAR data.

In many cases, the people who apply for refugee status fled because they had no other options, so it is unsurprising that few have legal representation when applying for formal refugee status. Legal and aid organizations are trying to change that.

In 2013, the first year in which COMAR maintained its database related to legal assistance, just 10 people who sought asylum had a lawyer, according to data COMAR provided to GPJ. By 2016, 1,067 asylum-seekers had expert legal help. Between 2013 and 2016, 11 percent of the 13,948 people who sought refugee status in Mexico had legal representation. Many of those lawyers were provided via 16 organizations that aid asylum-seekers.

One of those organizations is Casa del Migrante de Saltillo, a shelter for migrants heading north. Five years ago, that shelter began counseling migrants and gave them guidelines for how to initiate a formal request for refugee status, says Diana Castillo, a migrants advocate at the shelter.

Now, she says, the shelter offers long-term assistance for Central American migrants that lasts through a migrant’s entire request process.

“Having that support empowers people in this process, so they feel assured in their interviews, don’t feel intimidated by authority and so they’ll know that they have the right to express what they feel, what happened to them,” Castillo says.

The shelter assisted more than 100 applicants in 2016, Castillo says, and as of the end of May, was working with nearly 70 cases.

Most people who seek refugee status are of modest means with basic educational backgrounds, says

Francesca Fontanini, a regional UNHCR spokeswoman. The asylum application document is 16 pages long, she says. Filling it out is a daunting task for people unaccustomed to such paperwork.

It is crucial to prepare applicants for the interview, she adds, because that’s when they have their best chance of convincing officials that their lives really are in danger. Often, refugees have normalized violence and therefore tend to minimize details that are important to building their asylum cases.

Better-educated people tend to be more articulate when asked to state their reasons for fleeing their homelands, Coria Márquez says. In most cases, she says, refugee applicants tend to de-emphasize their direct, specific reasons for leaving.

“They omit information that’s important to prove their credible fear, that could shore up their own credibility,” she says.

E.O., a 35-year-old refugee, graduated from law school in El Salvador, his home country. But even with that background, he says support from the legal clinic at Universidad Iberoamericana was crucial.

“You feel protected by someone who can help you,” he says.

He was granted refugee status in March, and asked that only his initials be published because he fears being tracked down by the people who threatened his life back home.

Often, asylum-seekers in Mexico don’t originally set out to become refugees. Many enter the country with the intent of passing through to the U.S., becoming a formal resident or citizen in Mexico or of settling into an off-the-books life, working in the informal economy. It’s when they’re caught in the country without documents that some foreigners first think seriously about building a legal case for asylum. In other cases, refugees aren’t even aware that they have the option to apply for asylum until someone at a shelter or another migrant tells them.

That’s what happened to J.R. He took a one-time welding job in Honduras in 2012 and discovered, he says, that his bosses were narco-traffickers. It’s common for drug lords to order the deaths of people who might have seen or heard a detail about their illicit businesses. J.R. says he didn’t stumble upon any information about his employer’s likely crimes, but he heard one man tell another to kill him once the welding job was finished.

“I left with the job half-done, because I said to myself, ‘I won’t survive to tell the tale,’” he says

J.R., like E.O., asked that only his initials be published for the sake of his safety. It’s unlikely that the people he ran from would track him down in Mexico, but the terror they instilled in J.R. is such that he refuses to take any chances.

He took a bus through Central America, then crossed by makeshift raft into Mexico, which is the common way that undocumented migrants enter to southwest Mexico’s border. He settled in Chiapas, Mexico’s southernmost state, then in 2016 headed north. He hoped to make it to Monterrey, where he’d heard there were jobs available, but immigration officials nabbed him on Dec. 1, when his bus stopped at a checkpoint near Mexico City. Someone on the bus had told him that it was possible for some migrants to get refugee protection, so when he was taken to a detention center, he asked to apply. UNHCR officials connected him with Coria Márquez’s legal clinic.

But when the time came to make his case in an interview with COMAR officials, J.R. fumbled. It seemed that the government official wanted him to contradict himself, J.R. says.

“Sometimes he asked me questions, so I tried to answer him and I’d get halfway through and he interrupted with something else, you know?” he says. “So I don’t know if they do it to make people get confused or lose self-control… but your story is the one that you have, not the one they [think you] have.”

J.R. knew the interview had gone badly, so Cuan Corpus urged him to ask for another one. He was in the process of applying for that option when he learned that his asylum application had been denied. No reason was given.

He appealed the decision through COMAR, but the agency rejected it on June 30. Now he plans to take the case before a judge.

“I’ve never been in a situation like this, but little by little it has to lead somewhere, no?” he says.