Skip to main content
The story you are reading was published on Saturday June 24, 2017. To read more recent stories click here. 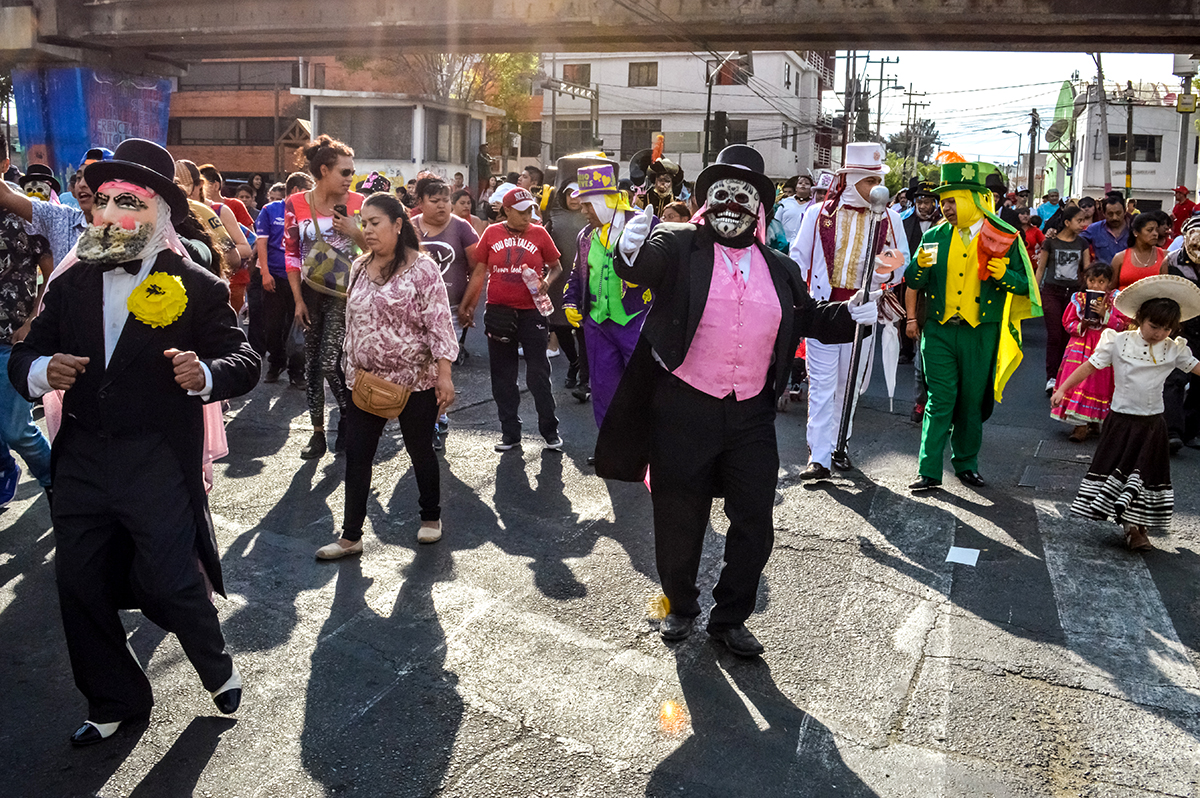 MEXICO CITY, MEXICO — As trumpets sound, drums beat and shotguns fire, curious faces peek out of windows and doors to see costumed crowds dance down the street to cheers.

The commotion marks the beginning of carnival season, which this year was celebrated most weekends from Feb. 11 through April 30 (with a break in the festivities for Easter) in neighborhoods throughout Iztacalco, one of Mexico City’s 16 boroughs.

No one knows precisely when the carnivals first started, though the government recognized the organizers in 2014 for their work in continuing a tradition that is acknowledged as being more than 100 years old.

“Since I was very little, my grandfather was already taking part in them,” says Pedro Vázquez, 86. 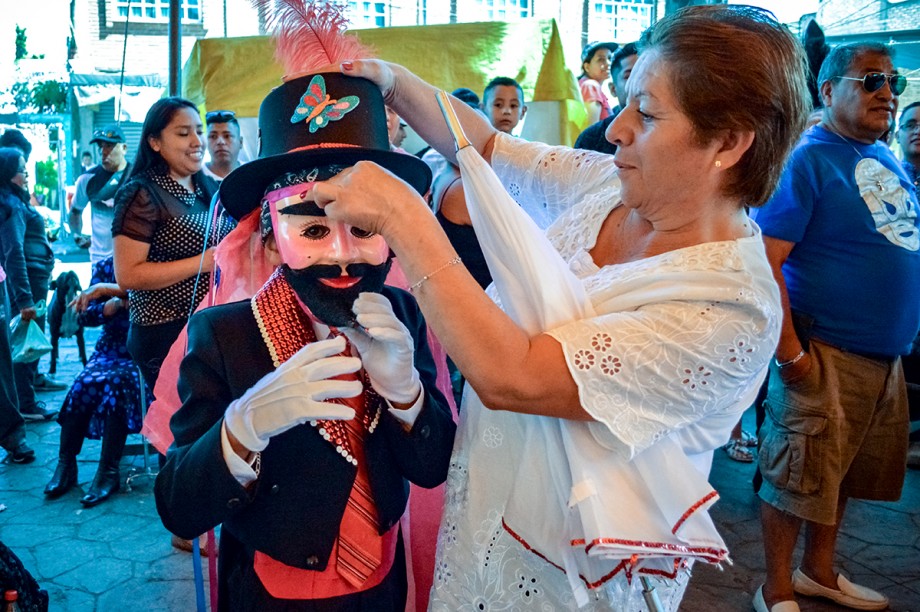 Aurora Hortensia Martínez Martínez, 54, helps her grandson José Alberto Reyes Téllez, 9, put on his mask during an Iztacalco carnival. José has been participating in every Iztacalco carnival for the past five years, after his grandmother gave him the traditional “catrín” costume.

A traditional costume consists of dressing up as a “catrín,” or university graduate, which includes a bearded mask, a tailcoat and a top hat. Some add colored ribbons to the hat, or umbrellas that match the color of their ties.

The blue-eyed, blond-bearded masks are thought to mock Ferdinand Maximilian, whom Napoleon III had tried to install as Emperor of Mexico to impose French rule in the Americas in the mid-1800s.

“It was a mockery of the bourgeoisie that discriminated against the humble people, that is why they wear blonde masks and a [top] hat,” says Christian Linares Moreno, who has been an organizer of the Carnaval del Barrio de La Cruz Coyuya for 12 years.

Another idea is that the carnivals may have started even before, Linares, 32, says. Because the carnivals start in the spring, just before Lent, they are a chance “to party before the time comes to behave,” he says. 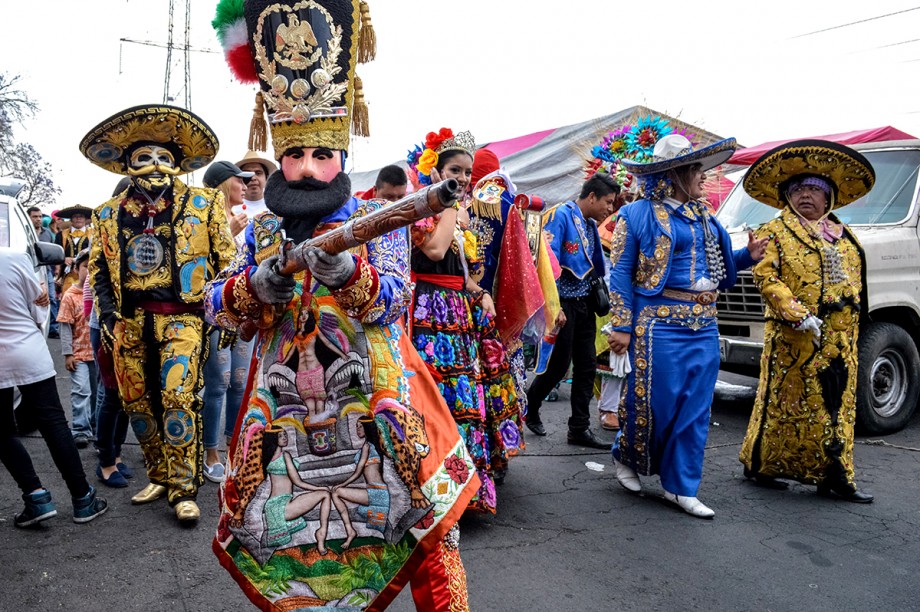 A participant in an Iztacalco carnival clears the way for the parade with a special shotgun that shoots gunpowder and emits smoke. People travel from different Mexican states to dance with the locals, wearing costumes embroidered by hand.

In each neighborhood carnival, people roam the streets with bands and a leader clears the way by firing a hand-held cannon to announce they are coming through. The neighborhood residents dance and people from other neighborhoods join the celebration.

Over the years, the carnivals have evolved. Now, there are carnivals just for children, which are led by a decorated float carrying both the current queen and the past queen of the carnival, who distribute sweets and toys to the parade-goers in fistfuls of confetti. 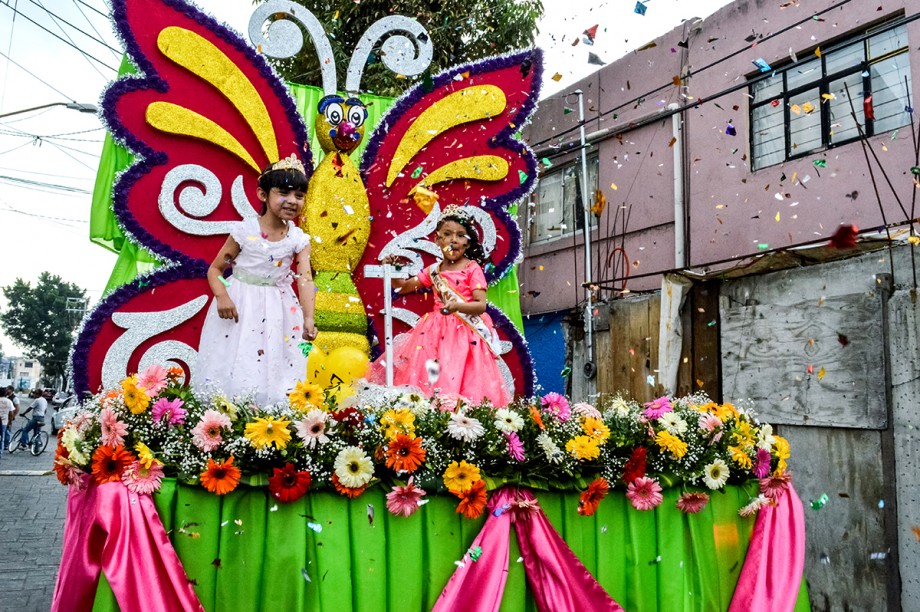 Another evolution is the use of costumes depicting movie or other famous characters, which are called “chichinas” and stand out from the more traditional university graduate costumes.

It’s also now common to find people dressed up as “charros,” traditional Mexican horsemen, at the Iztacalco carnivals. This costume includes a big hat and an embroidered suit, sometimes with a golden thread, says Linares, who is also part of the Iztacalco leadership organization, Patronato de Carnavales en Iztacalco. 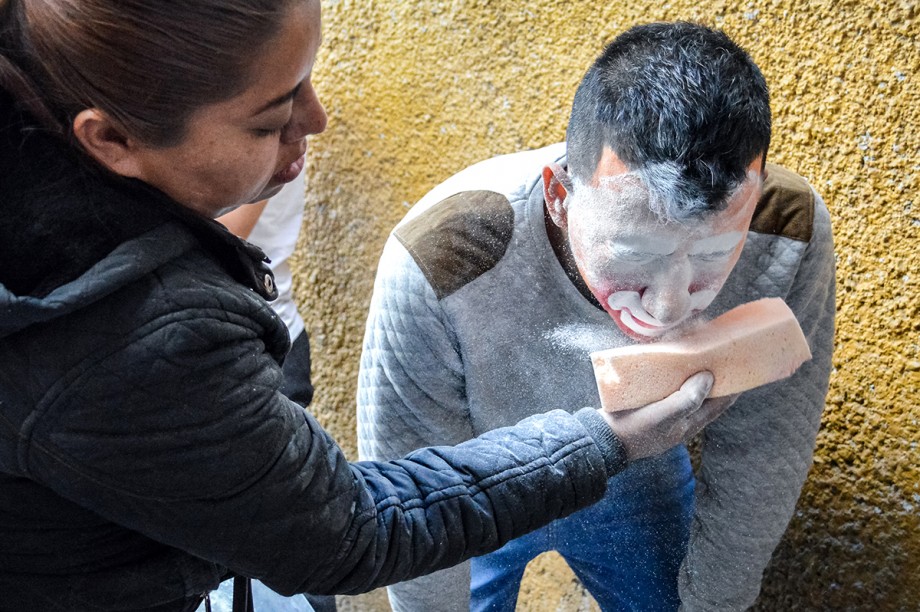 Professional clown Tatiss (left), 28, helps Alan Camacho with his clown costume before they begin celebrating at an Iztacalco carnival. Powder is used to set the makeup.

Each carnival lasts around five hours and participants stop at points along the route for refreshments.

The carnival ends with a meal, often prepared by the women of the neighborhood, and offered by each organizer, Linares says.

The Santa Anita carnival is the biggest, with anywhere between 800 and 1,000 people each year.

A new generation of carnival organizers – young people who are interested in improving the carnival began a new tradition in which participants from all the Iztacalco neighborhoods get together after Easter at the Plaza San Matías in La Asunción for one last street party.

At the end, everyone heads home, puts their costumes away and awaits the next year to celebrate carnival together again. 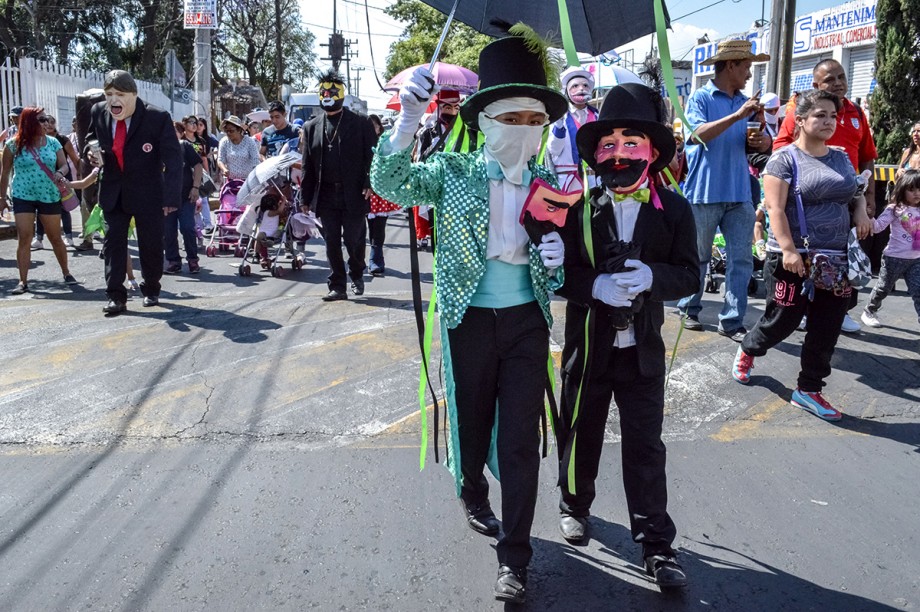 Local children dance in an Iztacalco carnival. Organizers of the carnival say children are important because they will be the ones carrying on the tradition for another 100 years.