Skip to main content
The story you are reading was published on Sunday May 28, 2017. To read more recent stories click here. 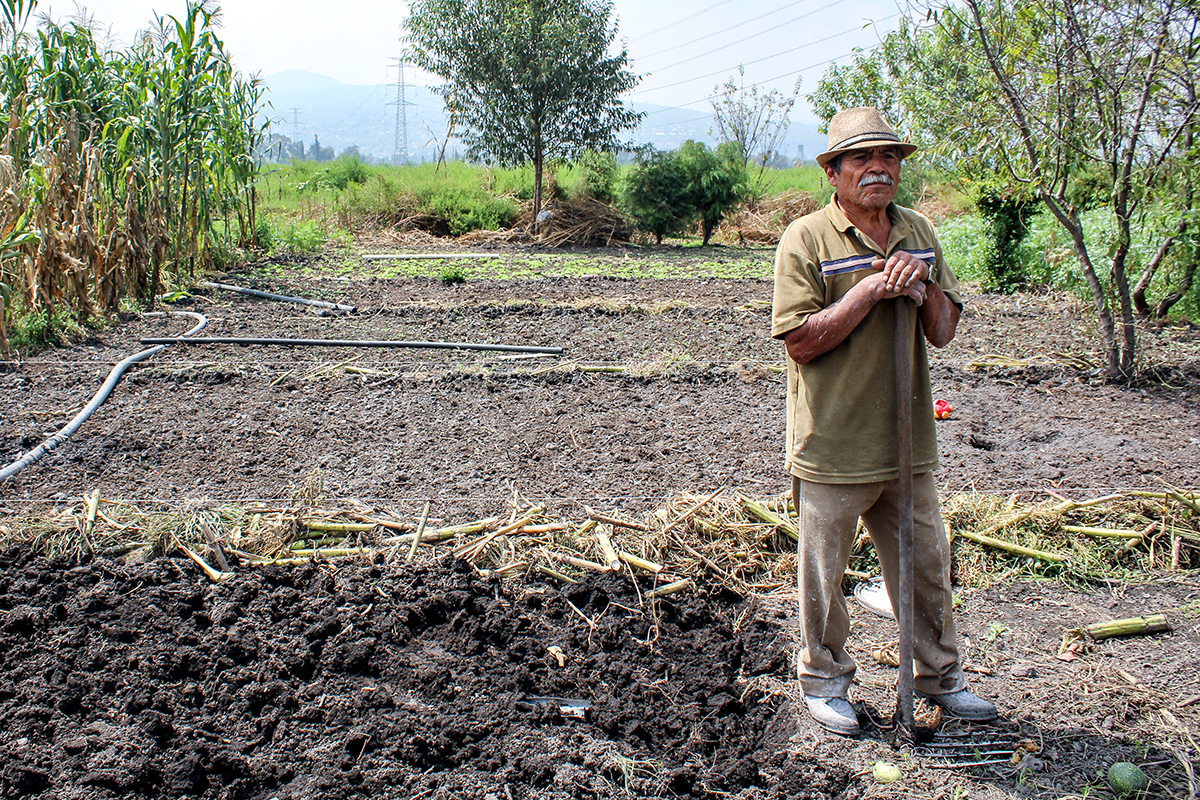 MEXICO CITY, MEXICO — Isabel Gaspar’s farmland is within a natural resource conservation area, but as her Volkswagen CrossFox approaches it, mounds of earth and rock block her path. She stops the vehicle and advances on foot, hopping from mound to mound.

The mounds, she says, will be used to fill in land so people can illegally build homes in the preservation area.

Gaspar’s 7,500-square-meter (or 80,729-square-foot) plot in Mexico City’s southeastern San Pedro Tláhuac area, once part of a wide area of farmland, is increasingly squeezed on all sides by illegal settlements, including dirt paths, soccer fields and other signs of community life.

“It feels like impotence and sadness at the same time because there’s no awareness-raising (with) future generations because we only think about urbanizing,” Gaspar says. “But where will our food come from?”

It’s not just here that illegal settlements have cropped up. All told, such settlements now cover 2,769 hectares (6,842 acres) – 1.8 percent of Mexico City’s land – and they contain an estimated 50,000 houses.

When farmers and other landowners saw those settlements encroaching in the San Pedro Tláhuac area about eight years ago, they formed a group to protect the land. In 2010, the group formally incorporated under the name Grupo de Vigilancia Tlalli Septiembre Negro. “Tlalli” is a word from the Náhuatl language that means “land.” “Septiembre Negro,” or Black September, was adopted in memory of a landowner’s son, whom outsiders tried to force off his land in September 2009. Four days later, he was shot dead.

The group’s primary purpose is to keep watch over 80 hectares (198 acres) in an area known as Ciénega, where only rural agro-industrial production is allowed, according to the Programa Delegacional de Desarrollo Urbano de Tláhuac, a municipal program for urban development. But members also clear out trash and promote general orderliness. 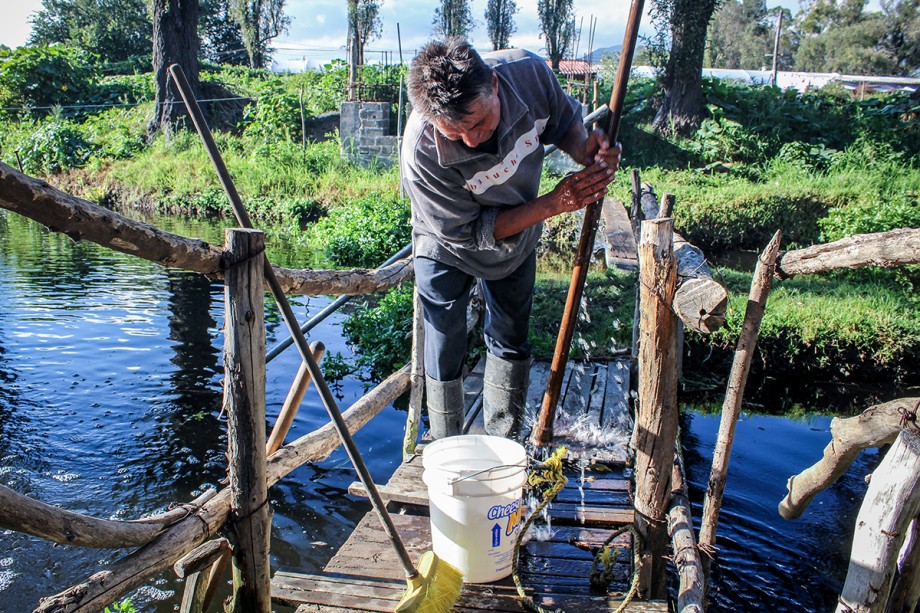 Members of Grupo de Vigilancia Tlalli Septiembre Negro maintain the conservation area in the San Pedro Tláhuac area of Mexico City. Here, Rafael Martínez Torres works the morning surveillance shift, in which he monitors for illegal settlements and also clears out trash and invasive plants from the area’s canals.

Now, each of the group’s 15 members receives a monthly stipend of 2,610 pesos ($139.75), which comes from the Comisión de Recursos Naturales, the office of the local environmental secretariat in charge of carrying out programs involving the protection, restoration and conservation of the protected areas.

The group’s members organize into three shifts of five people each – mornings, afternoons and weekends. They make rounds in the protected area and report people they see tossing construction or waste materials, or stealing fish from the canals or produce from the fields. They also pull weeds and water lilies known as “huachinango,” which can keep the water from oxygenating when they cover too much of the water’s surface.

Nearly 60 percent of Mexico City’s 148,179 hectares (366,158 acres) are listed as conservation lands, according to city government data. Most of the conservation lands are in the city’s south and southwest, in the same areas where illegal settlements have rapidly spread. As a result, water tables have been over-exploited, and there’s been a loss in biodiversity. Erosion, deforestation and soil contamination are all common problems now.

In Tláhuac in particular, clandestine garbage dumps and other debris have come with the settlements, jeopardizing the area where Gaspar’s paternal grandfather grew corn.

Her father kept the fields up, even though it was no longer the family’s sole source of income. Gaspar is a dentist, but she took over the farm when her father died six years ago. She and one of her brothers saw the value in keeping the land in production and building on what her forefathers created.

“These are lands that they worked hard to obtain, to keep up and so forth. So I feel like you develop an appreciation for the land,” Gaspar says. 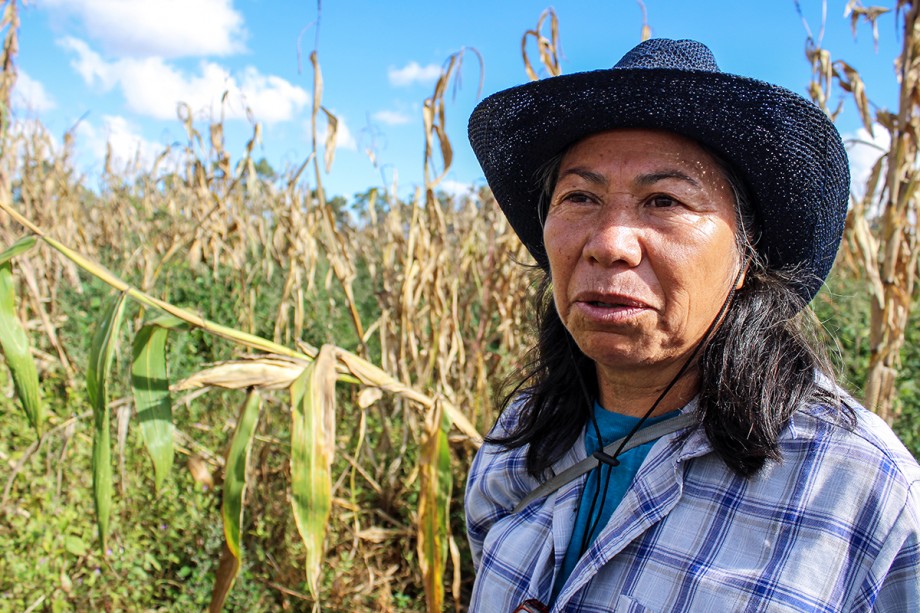 Concepción Vital, who was president of Grupo de Vigilancia Tlalli Septiembre Negro until March, says she learned to care for farmland as a child, when her father took her and her siblings to their family plot every day.

Like most scenarios involving people who need housing, the problem is not always the fault of the people who are encroaching on the conservation land.

She says she was among the first residents in the area. Back then, she says, the ground was green and muddy. Slowly, more people came, each bringing cardboard boxes filled with their possessions.

Moreno de la Rosa lives with her daughter, son-in-law and two small grandchildren. The family would prefer to live closer to the heart of the city, but it’s too expensive there.

The area’s isolation was eased in 2012, when a metro line connecting Tláhuac with the southwestern-most point of the city was built. That connection also attracted more people.

But even as people were arriving, some were leaving. Most of the landowners are now elderly, and people who inherit the farms sometimes don’t know how to maintain them, says Isidra Martínez, another security group member.

Sometimes, farmland winds up abandoned, making it easy prey for those settling illegally.

Gaspar doesn’t have children, but she says that she is encouraging a love of the earth in her nephews.

All the same, she isn’t very optimistic about her parcel’s future. She thinks it will be lost to growing urbanization.

“Yes, it’s going to hurt, because this provides us with at least enough to eat corn,” she says. “Now, nothing more will be left for us beyond the memory that we planted, we ate, we gave it a try. Given how things are going, there’s not much time before all of this is lost.” 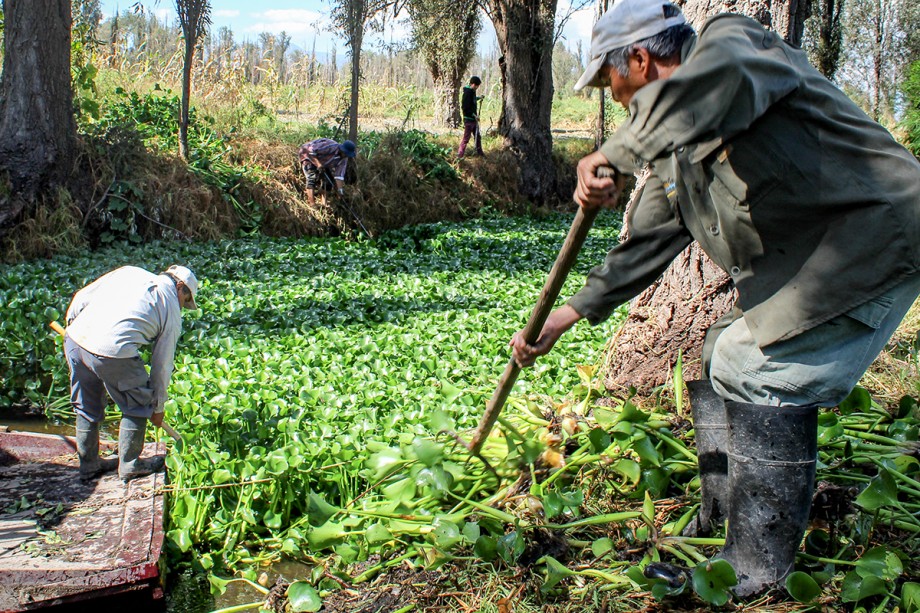 Magdaleno Torres and Benigno Vázquez clear out water lilies from the canal near the Ciénega area.