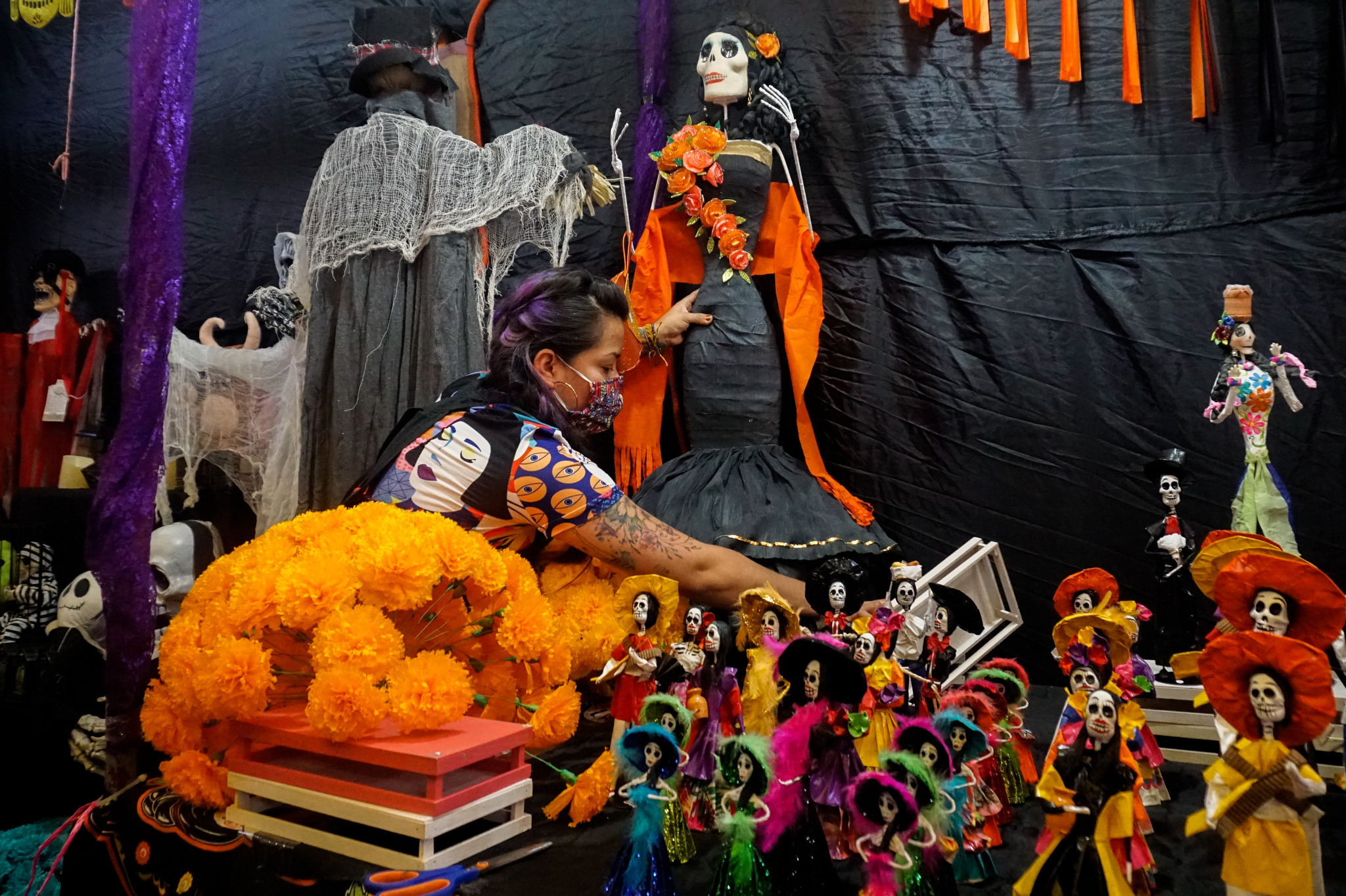 The rows of ornate “catrinas” that lined Mexico City’s markets hinted at a cultural shift. Día de Muertos, or Day of the Dead, a sacred Mexican tradition that dates back to pre-Hispanic times, was once a somber occasion marked by marigolds and incense — two holy days to honor and reunite with the deceased.

Spanish colonizers added confectionary sweets and put candles on altars to guide the dead, making the event only slightly more festive. But in recent years, prompted by a flurry of Hollywood movies and growing international attention, the stately ritual has transformed into something of a global party — and an economic windfall.

“We no longer have much idea of what is original and what is not,” says Melissa Valles, an archeologist and historian. “We are adapting to a globalized world in which cultures have to be understandable.”

The changes started in 2014 with “The Book of Life,” an animated film produced by 20th Century Fox Animation, a United States-based production studio, about the adventures of a young Mexican man who journeys to the world of the dead. The version of the “La Catrina” skeleton depicted in the movie beat out witches and devils as the most popular costume that year for Mexican girls who went trick-or-treating.

The following year, the James Bond spy movie “Spectre” showed the main character running after bad guys through a Día de Muertos parade of grim reapers and walking skeletons in Mexico City (never mind that the city didn’t hold such parades at the time). The film ranked among the top seven 2015 films in Mexico, according to the Cámara Nacional de la Industria Cinematográfica (National Chamber of the Cinematography Industry), which tracks the film industry. Its success prompted the government to start an actual parade the following year. In 2019, more than 800,000 people attended. 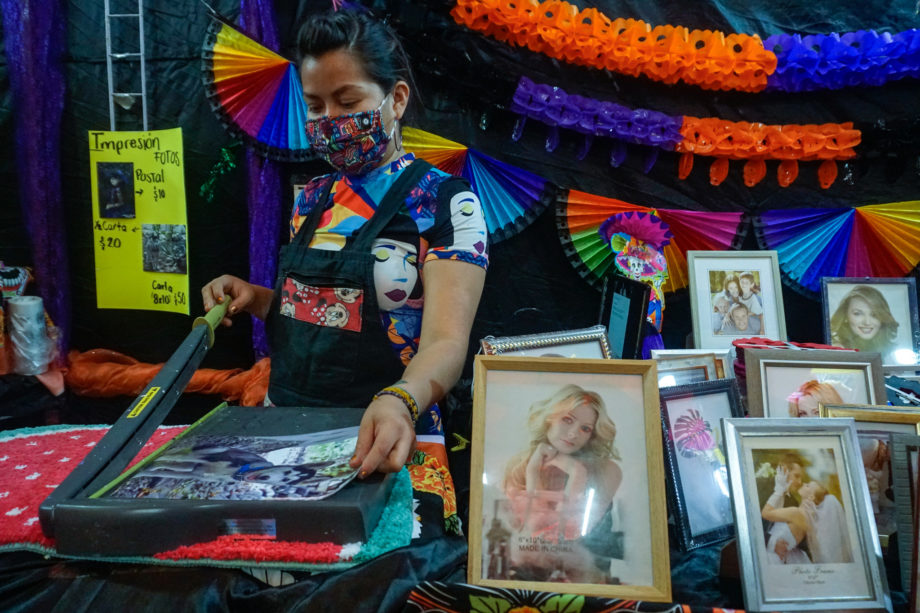 Walt Disney Pictures topped off the movie run in 2017 with the release of “Coco,” an animated film about a boy who enters the world of the dead by mistake and must find his way out by Día de Muertos. It beat out all Mexican films that year in audience and revenue generated through ticket sales. Officials screened the movie in cultural venues intended for art films and in public squares. Before long, vendors who used to sell sugar skulls started to market multicolored skeletons and skulls meant to resemble celebrities.

“Catrinas have been very fashionable lately because of the movies,” says Tania Morales Reyes, a 27-year-old photographer who has sold Día de Muertos items, including catrinas, for the past 15 years at a market in downtown Mexico City. “They’ve started to wear lots of makeup.”

It’s also presented her with a business opportunity. 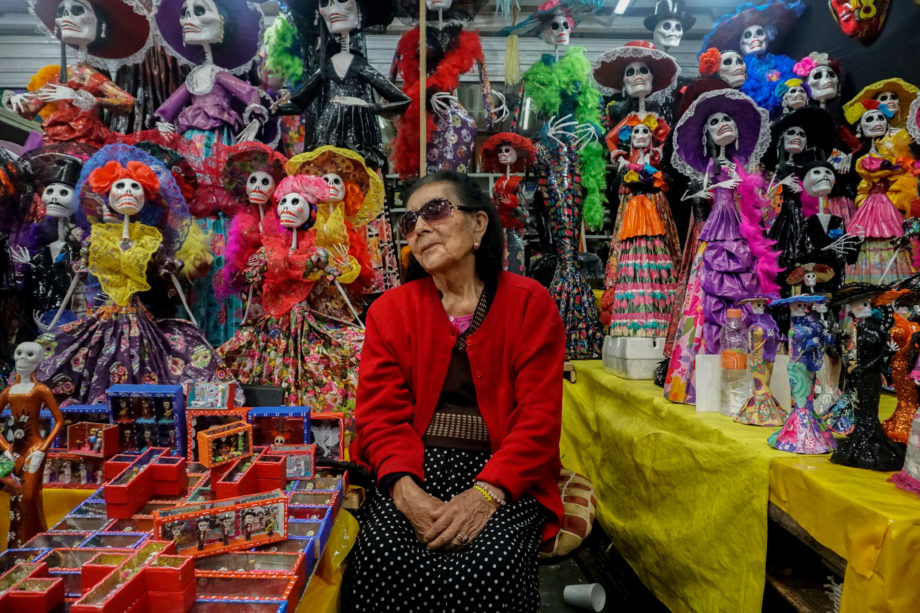 Reyna García Garrido has sold Día de Muertos decorations at a market in downtown Mexico City for more than 60 years.

Morales Reyes thinks this outside representation of Día de Muertos is the only reference many Mexicans know to the two days in November when families traditionally build altars to loved ones and offer their favorite delicacies.

And it’s shifting traditions. Characters in “Coco,” for example, insist that altars feature photographs of the dead so they don’t disappear forever, a concept born from the film. Morales Reyes now offers customers the option of printing photographs of their loved ones.

“A lot of people are getting to know the culture that’s been here for so many years,” she says. “And thanks to that, we’re able to make sales.”

The Día de Muertos celebration brought in 18 billion Mexican pesos (nearly $847 million) in 2019, 2 billion pesos ($94 million) more than four years prior, according to the Confederation of National Chambers of Commerce, Services and Tourism. 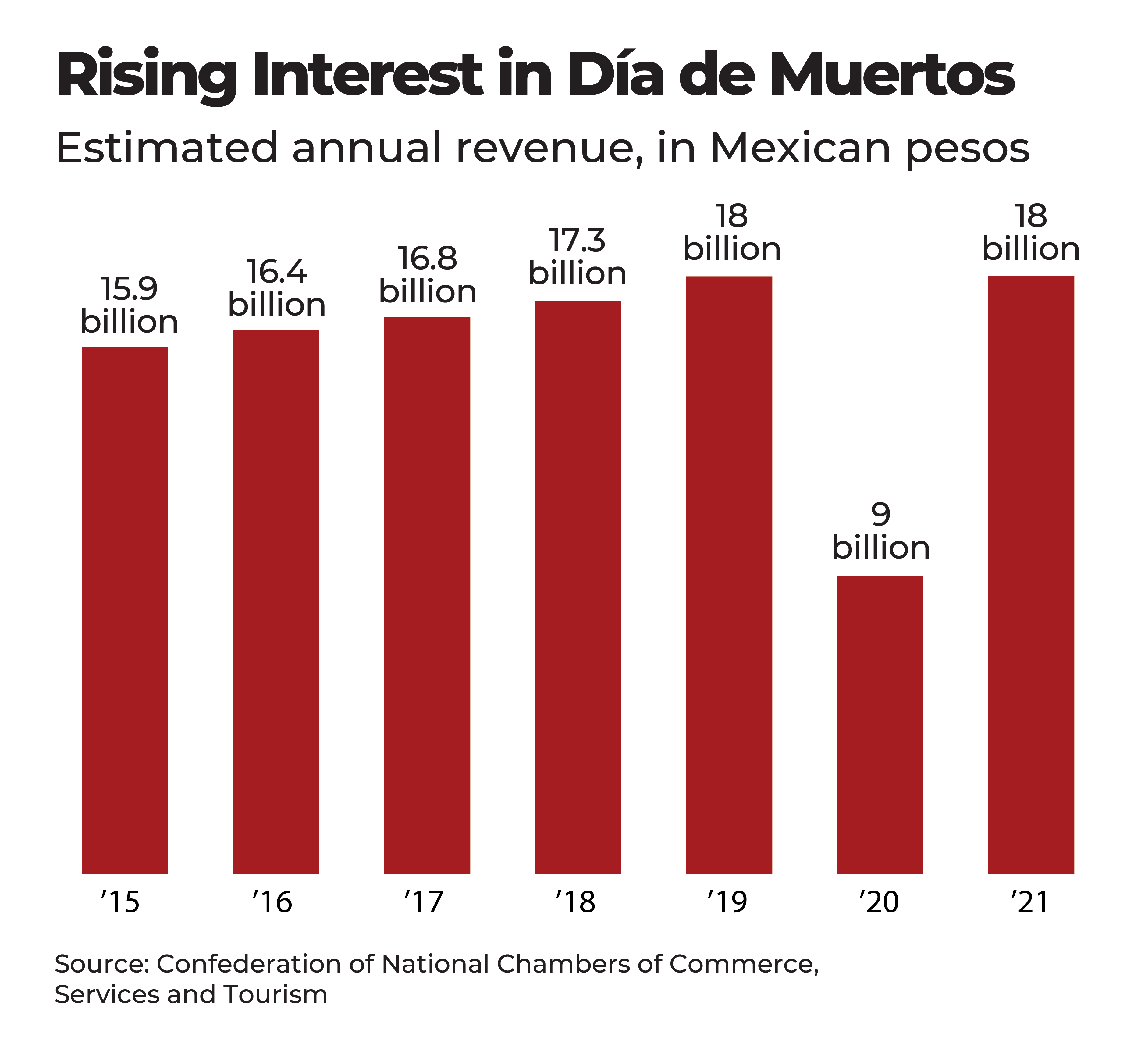 The event took a hit in 2020, when the government banned visits to cemeteries to prevent the spread of the coronavirus. Officials estimate a loss of 9 billion pesos ($423 million), but a rebound this year to 2019 levels.

“This is an example of how traditions change with the passing of decades and centuries,” says historian Enrique Ortiz. “It is a living tradition, a tradition that mutates.”

Few have seen the change as clearly as Reyna García Garrido, who has sold decorations at Mexico City’s Mercado Jamaica for more than 60 years. The 84-year-old remembers when the sprawling market only sold wholesale produce and flowers, back when people wanted incense and tissue paper images for Día de Muertos. Now, she squeezes into a stand bursting with elaborately dressed skeletons and 40 hanging piñatas.

Even with the dip, García Garrido says sales of Día de Muertos items have doubled since the movies started coming out. This year, vendors sold clay masks decorated in a rainbow of colors and lampshade catrinas. 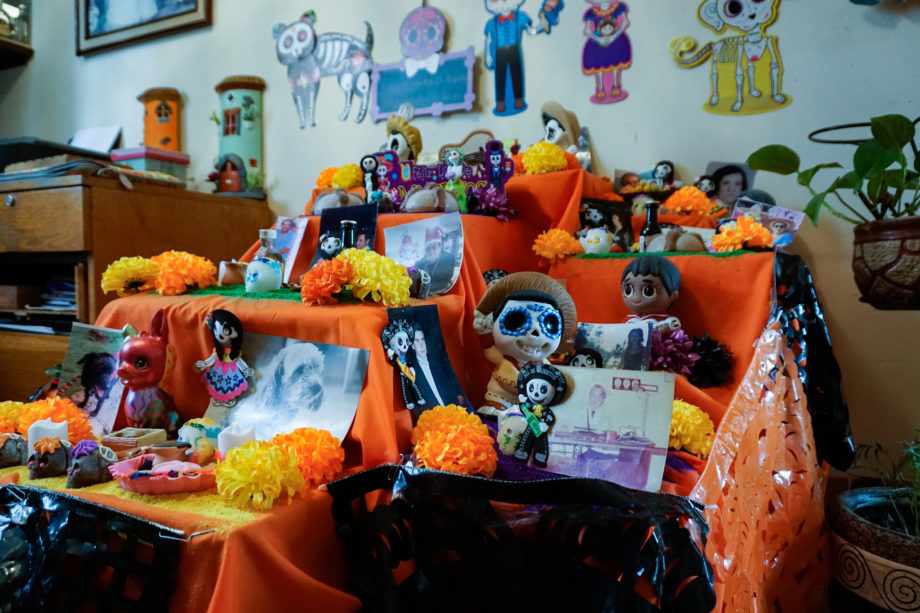 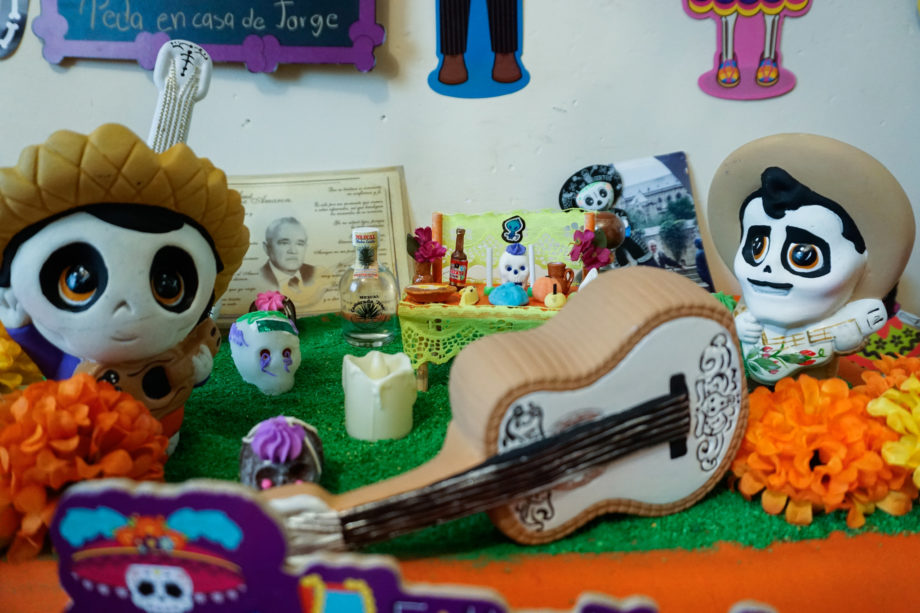 Silvia Delgado builds an altar to honor her father. She blends traditional offerings, such as chocolate and sugar skulls, with nontraditional elements, including Disney-like skeletons inspired by “Coco.”

The consumerism concerns some sellers. “These are no longer our traditions,” says Guadalupe Reyes, who sells seasonal items in a shopping mall. “The kids will remember the ‘Coco’ movie more than their grandparents’ memories.”

But it’s also created new memories. The Mercado Jamaica transforms every year as Día de Muertos approaches. Sun-orange and velvety pink floral arrangements appear, along with pumpkin piñatas and the smell of fresh, sugary pan de muerto, a sweet bread laced with orange, or flavors such as anise.

Customers notice a change too. Silvia Delgado, a frequent market customer who lives on the outskirts of Mexico City, has conceded to her children’s demands for a Día de Muertos altar. “With my first son, we didn’t put up an altar,” says Delgado, whose children are 15 and 4. Then, she says, her daughter saw “Coco” and said, “We have to put a photo of Grandpa up, Mom.”

So they started a new tradition.