Skip to main content
The story you are reading was published on Thursday August 31, 2017. To read more recent stories click here. 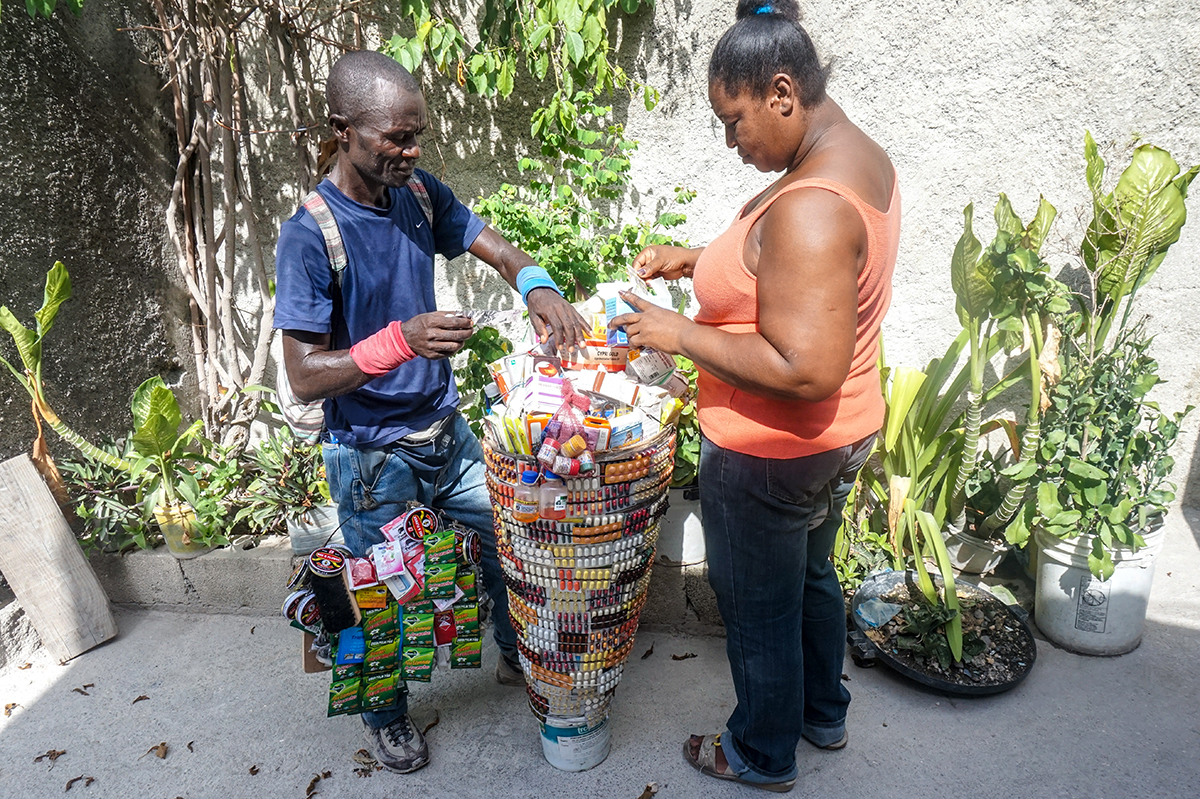 Customers without a prescription come to him all day long, cash in hand, in search of pain medication, anti-inflammatory pills and myriad other products.

He’s been selling medicine on the streets for 21 years, knowing it’s illegal.

A widower and father of three, he says the job market in Haiti is impossible.

He says he’s tried unsuccessfully to leave the country five times. That’s when a cousin showed him this new business opportunity.

“Landing a job was so much harder for some of us,” he says. “And I had no alternative but to look for other ways to provide for my family.”

He says the work isn’t difficult and it didn’t take much to get started as a street seller.

“I don’t think one has to be the kind of person with a particular set of skills to sell meds. All you need is to have someone around you to provide advice and guidance, and then you invest the little you have – and success becomes taken for granted,” Anel says.

The informal street trade of prescription medication is common here. Many Haitians say they prefer to self-medicate rather than seek formal treatment because public hospitals are often closed on strike, government health services are inconsistent and private clinics are too expensive.

A few days ago, one of the vendors came up to a friend of mine with abdominal obesity and offered her some meds that are usually administered to menopausal and postmenopausal women, tricking her into believing that the meds would exert an effect on her obesity. We can safely say countless numbers of people have taken wrong meds or wrong doses of meds.Johny Descollines, an infectious disease doctor

But in Port-au-Prince, people don’t need to go far to find prescription medication. Throughout the capital, street vendors crisscross the streets selling pills out of pocket illegally.

Haitian law prohibits the sale of drugs by any person other than a qualified pharmacist, but street sellers say they operate without fear of punishment and can earn moderate to lucrative wages every day.

However, the only people allowed to sell medication are those over the age of 18 who hold a degree in pharmacy, awarded by the Haitian state after completing a full course of training and exams, according to the Ministère de la Santé Publique et de la Population, the public health ministry.

But local people say they prefer to buy medication on the streets.

“I prefer to buy my drugs on the street because at the pharmacy prices are fixed. And in the street, you can negotiate,” says Guerline Jean, who frequently buys medicine for himself and his family on the streets.

“Thanks to the street vendor, you can buy medicines that the pharmacy only sells by the box. But in the street you can purchase in units,” he says.

For example, the prescription antifungal medication Fluconazole, also known as Diflucan, sells for 450 gourdes ($7.15) in a local pharmacy, but Jean says he bought the same amount for 200 gourdes ($3.20) on the street. He says he’s also purchased a single pill for 20 gourdes (30 cents), something that’s not possible at a pharmacy. Similarly, omeprazole, commonly known by the Prilosec brand name, a prescription medication used to treat heartburn and stomach ulcers, sells for 15 gourdes (20 cents) per pill at a pharmacy, but on the street 10 gourdes (15 cents) will buy three pills.

Monique Guerrier, 44, has been a practicing pharmacist for 12 years. She says people opt for street medication for a number of reasons, which has caused the rise of what she calls “wandering druggists.”

“It’s just a matter of education. Some people choose to drop everything and rush to the hospital for any sign that reveals any health concern, while others prefer to seek their own solution – seeking out help from illegal drug vendors,” she says. “Over the past several years, there has been a steady increase in the number of wandering druggists, fueling concerns about health risks to the Haitian people.”

Guerrier says she worries about where patients acquire their medications, if they are expired and whether people are getting the right medication for their particular ailments.

Anel says he can’t reveal his supplier, citing his own security. But he says he gives people the medication they want. Several of his customers declined to comment.

“Have we ever wondered where these meds come from?” Guerrier asks. “Huge swathes of people are lured into the belief that everything is too expensive at the drugstore, and they probably ignore the potential risks and dangers linked to self-medication.”

Johny Descollines, 32, is an infectious disease doctor who has been in general practice for the last five years. He is the president of Groupe Santé Pam, an organization that works to ensure access to healthcare for all Haitians, regardless of socioeconomic status. He says he understands what motivates people to look for medicine on the streets.

“People find it far easier to get meds off the street than seeking out help from a health center where they have a medical examination by a doctor. This is but a stopgap choice, but as most of them will tell you, this particular choice is made because of people’s very limited financial means and ignorance,” Descollines says, adding that medication that could cost more than 70 gourdes ($1.10) in a pharmacy might cost as little as 25 gourdes (40 cents) on the street.

“Patients are often given the same type of medications irrespective of whether or not they have the same or similar medical problems. Sometimes people with headache may procure the same type of meds. And yet, different headache triggers are encountered each day, each requiring a different treatment,” Descollines says. “Self-medication has become a widespread reflex response to any medical condition among the Haitians.”

The biggest problem he sees is that street sellers often work to convince clients that their available medications will cure their problems.

The informal street trade of prescription medication is common here. Many Haitians say they prefer to self-medicate rather than seek formal treatment because public hospitals are often closed on strike, government health services are inconsistent and private clinics are too expensive.

“A few days ago, one of the vendors came up to a friend of mine with abdominal obesity and offered her some meds that are usually administered to menopausal and postmenopausal women, tricking her into believing that the meds would exert an effect on her obesity,” Descollines says. “We can safely say countless numbers of people have taken wrong meds or wrong doses of meds.”

He also worries about medicine being stored at the proper temperature.

“The hawking of meds is definitely cause for concern due to poor handling, especially since such meds are constantly exposed to the brutal sun and remain unregulated. As if that were not bad enough, expiration dates are ignored. No one cares that meds procured on the street present a serious health risk to consumers,” Descollines adds.

In rural areas, he says, the problem is the same since Haiti’s health services are concentrated in cities, and people often have to travel long distances to reach health services.

“The Haitian people have no access to health education, and it’s somewhat absurd to see that the situation is worsening with every passing day as illegal vendors have now invaded the sector that should be the sole preserve of qualified professionals who need to operate undisturbed,” Descollines says.

Wilnor Dominique, a 32-year-old sociologist, says self-medication and other health care issues are not a political priority here. He says he hopes authorities and politicians will begin to pay more attention to the health and employment needs of their constituents.

“This unfortunate phenomenon has become rampant in the informal sector and is gaining momentum. Unless efforts are made to quell it, the government will be compelled to accept it as a legally accepted aspect, norm and principle,” he says.

For Etienne, he says he has lost faith in formal employment and is satisfied with his salary as a “wandering druggist.”

“We’re economically stable and own our own home,” Etienne says. “Also, we were able to afford to send our kids to school.”