BUENOS AIRES, ARGENTINA — Packages of bottled water, noodles, soap and shampoo have piled up among the youth soccer trophies and childhood photos in Estela’s house.

For the past three years, she has planned all her shopping around supermarket sales, stocking up on the items she is allowed to bring to Federal Penitentiary Complex I, where her son is serving a 12-year sentence for extortive kidnapping.

His March 2019 arrest took away her freedom, too.

“Prison came to live at my house; it becomes your whole life,” she says, as she breads and fries chicken fillets to take on her weekly pilgrimage to the penitentiary, also known as Ezeiza prison. “You wake up thinking about him and you go to bed thinking about him.”

She worries about her son’s health and safety in an overcrowded prison system declared a national state of emergency by the Ministry of Justice and Human Rights since 2019. A year later, the coronavirus pandemic revealed how much Argentina’s inmates depend on visitors, most commonly their mothers or wives, for moral support and survival. Visits were suspended between March and October 2020 to prevent contagion. That year, 360 prison deaths were reported nationally — the highest number since the government began publishing annual statistics in 2014; in the federal prison system, 214 protest actions were reported — the highest number since 2015 — including 152 hunger strikes.

“[My son] had nothing — nobody had anything. They lived on what the service gave them,” says Estela, who requested that her full name not be used for fear of reprisals. “We could not take food to them. It was just really, really awful.”

Even before the pandemic, basic necessities such as clothing, soap, toothpaste and toilet paper were scarce in Argentina’s prison system, according to a 2020 report by the Center for Latin American Studies on Insecurity and Violence from the Universidad Nacional de Tres de Febrero, a university in the province of Buenos Aires. But since 2010, as detention facilities have become more crowded, particularly in the Buenos Aires province, home to nearly half of the country’s incarcerated population, even beds have become luxury items.

Neither the national Ministry of Justice and Human Rights nor the Buenos Aires Penitentiary Service responded to Global Press Journal interview requests. On behalf of the federal system, which makes up about one-tenth of the country’s prison population, María Laura Garrigós, undersecretary of penitentiary affairs at the Federal Penitentiary Service, says efforts are underway to improve living conditions, but the agency cannot control the number of people sentenced to its facilities every year. 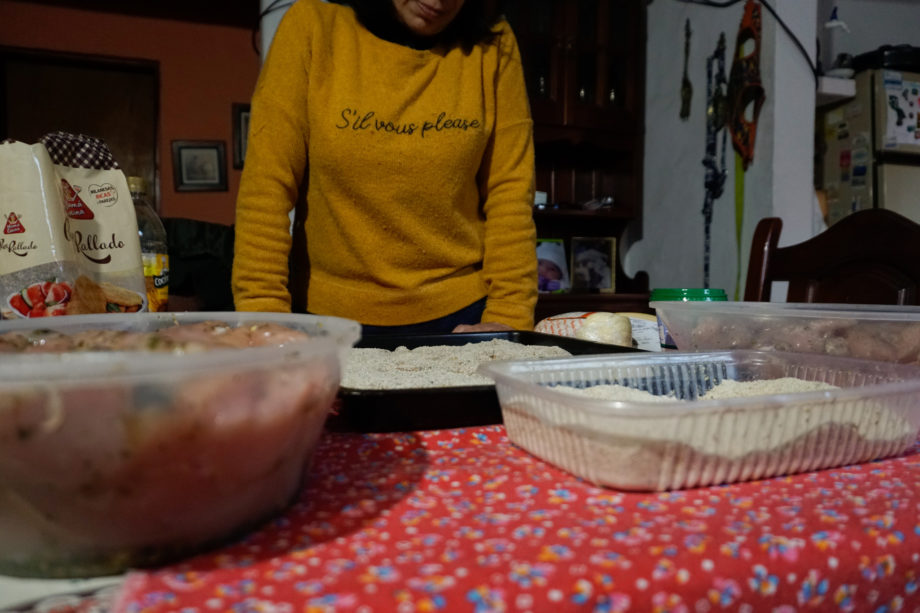 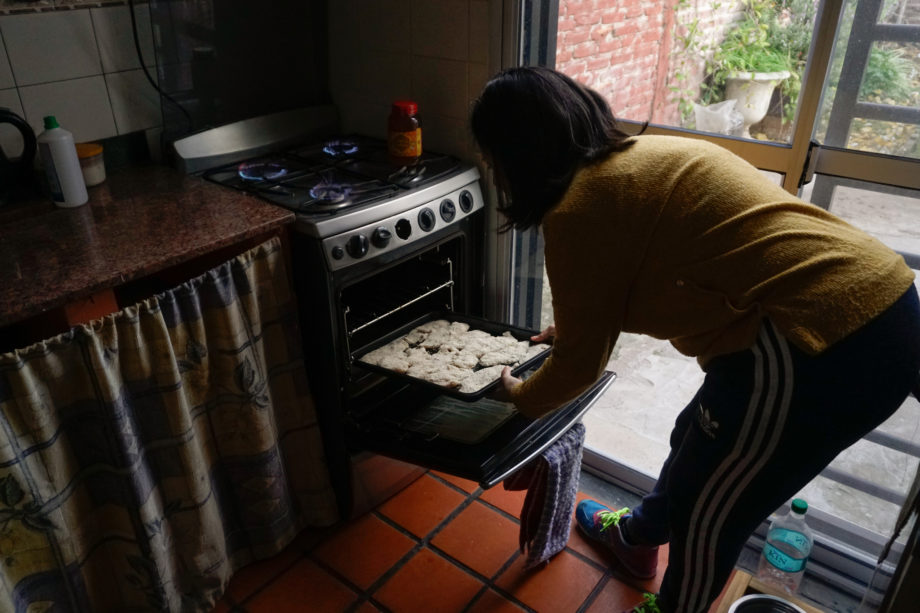 Estela prepares a meal for her son, who is serving a 12-year prison sentence nearby.

In the meantime, it’s up to families to provide their incarcerated relatives with food, medicine, warm clothing, hygiene supplies, blankets and phone cards, as well as the lawyers and paperwork they need to request medical attention, educational materials and prison transfers, says Inés Mancini, an adjunct researcher at the National Council of Scientific and Technical Research who studies jail and gender.

“The state locks you up, but it doesn’t do anything to ensure you’re cared for while inside,” she says. 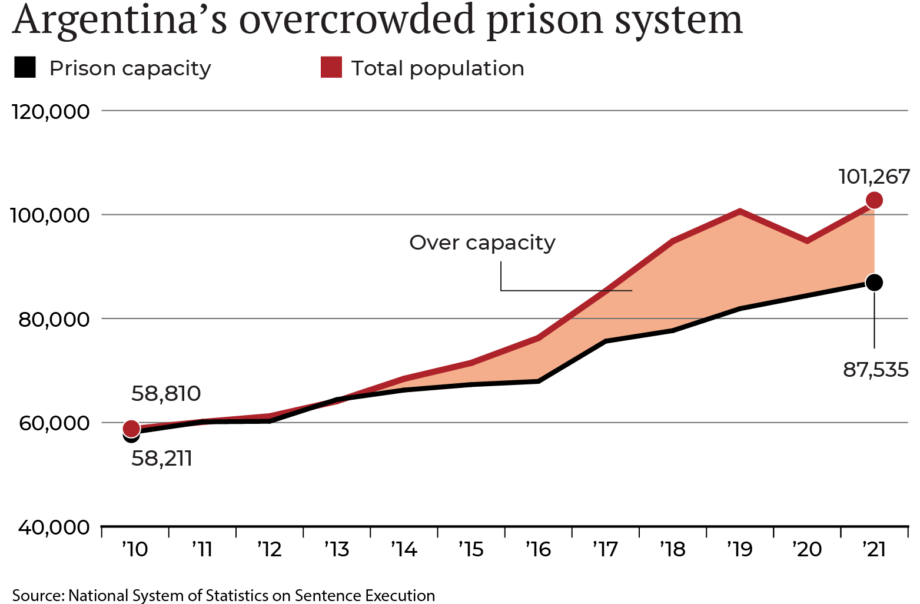 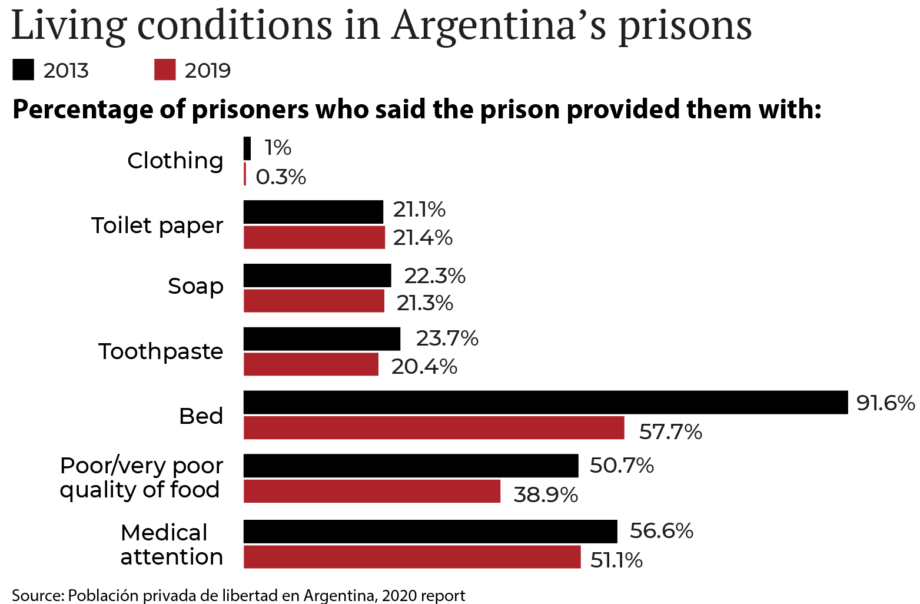 “That punishment does not extend beyond the intended target is a lie. Right now, punishment extends quite a lot to the wives, the parents, the siblings, the children,” she says. “They come to see us, so we’re the ones who see the impact, the anguish, the mental health problems that can arise as a result of the prison situation.”

Garrigós and Mancini agree that the tasks of physically and emotionally supporting those behind bars — the majority being young men — disproportionately fall to their mothers and wives.

“Both the prisoners and the relatives tell you that men do not go to visits because it makes them feel bad to go through that situation, so it’s better that women go,” Mancini says. “Ultimately, the weight always falls on the woman.” 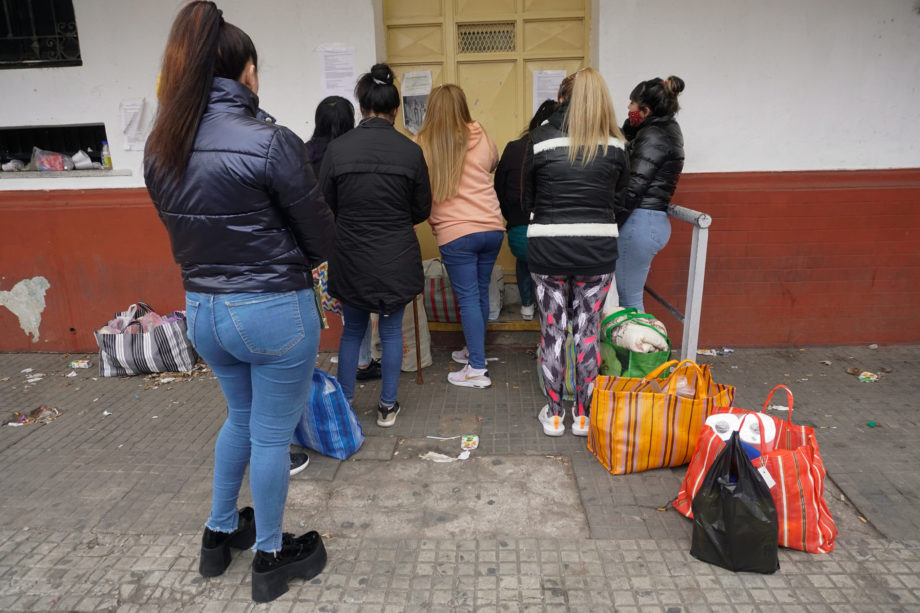 Armed with bags of food, clothing and toiletries, women prepare to visit family members at a prison in Buenos Aires, Argentina.

The Public Defender’s Office receives complaints from families about prison living conditions, provides free legal advice and representation, and accompanies them in the complaint process. But for the families, it’s not enough. 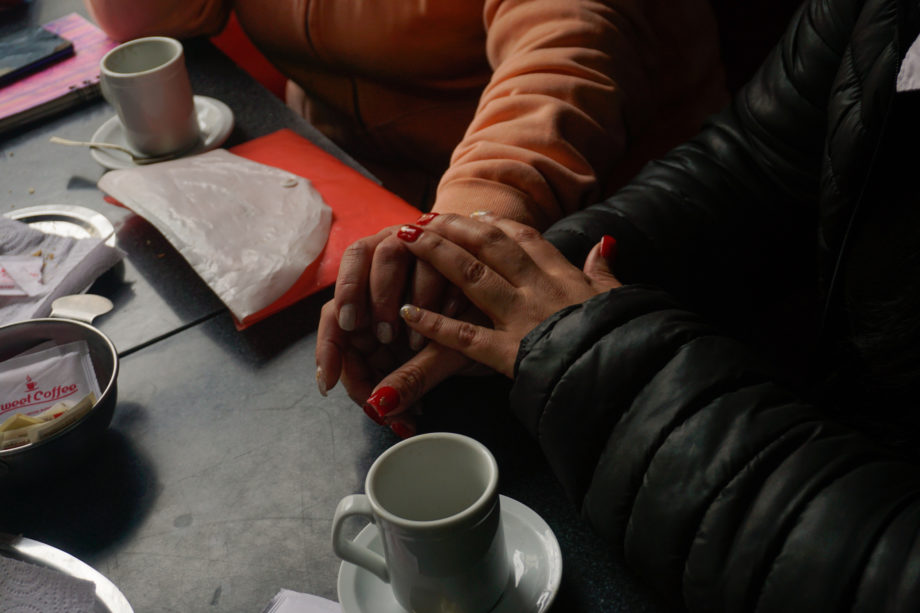 Mónica Tapia holds hands with Patricia Tevez at a cafe while waiting to visit her husband, who is incarcerated, in Buenos Aires, Argentina. Tapia says that talking with family members helps her cope with her anguish.

The stigma associated with having an incarcerated family member also makes these burdens heavier.

“We’re judged and thrown into the same box,” says Mónica Tapia, who adds that after her husband was arrested seven years ago for stealing from meat delivery trucks, she lost all of her housecleaning jobs. “They said, ‘We don’t want you to come work here anymore because your husband is incarcerated and we don’t know what situation we could be getting ourselves into.’”

While her husband serves his 13-year sentence, she has struggled to support their four daughters while meeting his needs in prison. She earns money by buying clothing in bulk and selling it at her local market and online. She cannot afford psychological help for her own trauma over this experience, she says.

“There are nights when I just get up to start crying,” Tapia says. “I cry my heart out, and then I come in here with a smile. … If we don’t come to visitation day, they lack everything.”

In one case, she says her husband was complaining of an earache for months — she did her best to clean his ear with rubbing alcohol and cotton swabs during their visits — before they were able to get his request approved for medical attention. Once a doctor saw him, she says, he was able to quickly diagnose the problem.

“My husband had spent three months with a cockroach in his ear,” she says. 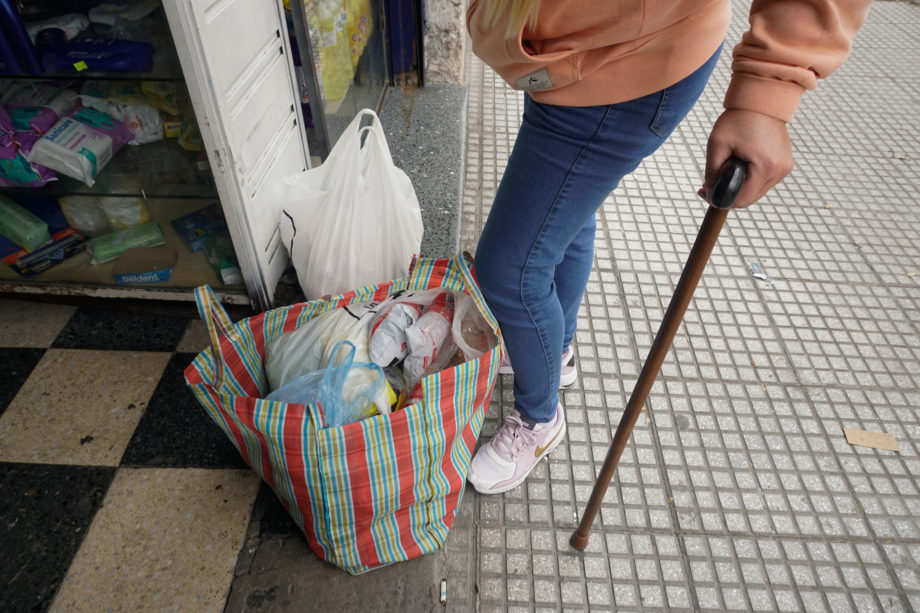 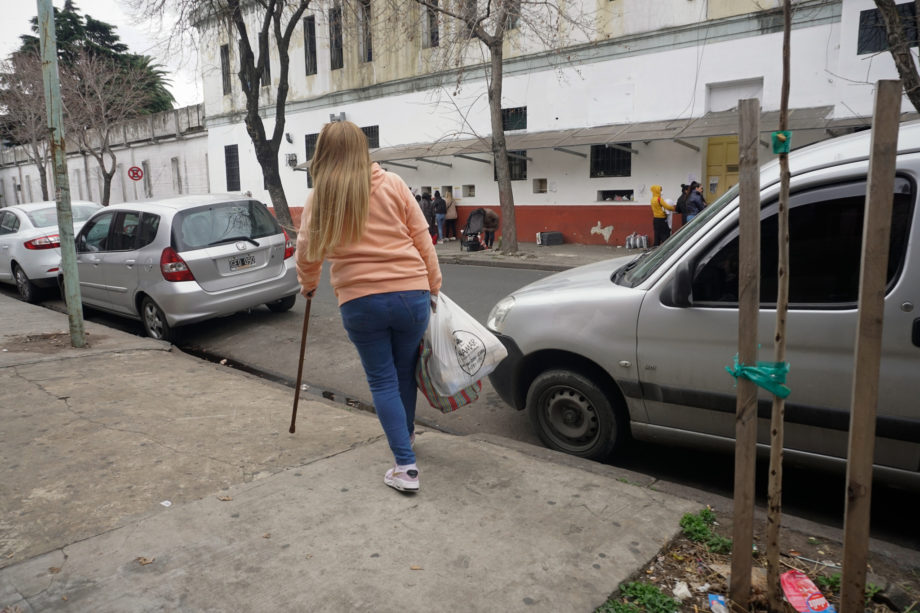 Mónica Tapia carries a bag of food and other necessities for her husband, who is serving a 13-year prison sentence in Buenos Aires, Argentina.

The Asociación Civil de Familiares de Detenidos (Civil Association of Relatives of the Incarcerated), a national organization founded in 2008, offers psychological, psychiatric, legal and social services for prisoners and their families on a case-by-case basis. But long-term relief has to come from national policy changes and cultural shifts, says Patricia Tevez, coordinator of the association’s legal-social advisory team. Her husband is serving a 45-year prison sentence for assault and robbery.

Investing in rehabilitation and reintegration of prisoners into society would reduce both recidivism rates and the stigma on prisoners and their families, she says. Tevez believes her husband would not have resumed illegal activities after serving his first prison sentence if they had gotten the support their family needed.

“When my husband was about to be released [the first time], nobody asked me six months before, ‘Hey, do you need anything? What job is your husband going to have? What is he going to live on? What can we help you with?’” she says. “There is no such thing. It does not exist, and it is very important.”

She only felt comfortable becoming a public advocate after her children began sharing their family’s story at school.

“I always kept a low profile,” she says. “I always tried to be careful for my children because they didn’t want people pointing their fingers at them, saying, ‘Look at that one who has a relative in jail.’”

Without such services, it’s up to families to support their loved ones when they are released, as they did when they were in prison.

Estela says her long-term focus is to ensure that her son can rebuild his life in nine years, when he is scheduled to be released at the age of 41. In prison, he is taking a mechanics course and earning a college degree in social work. When he doesn’t understand something, he makes photocopies of the materials so that Estela can take them home to review with her husband.

Envisioning a future for her son outside of prison walls — perhaps even starting his own mechanic shop — gives her the strength she needs to continue supporting him.

“I visit him on Sunday,” she says. “And on the following Monday, I am already planning everything for the next Sunday.”