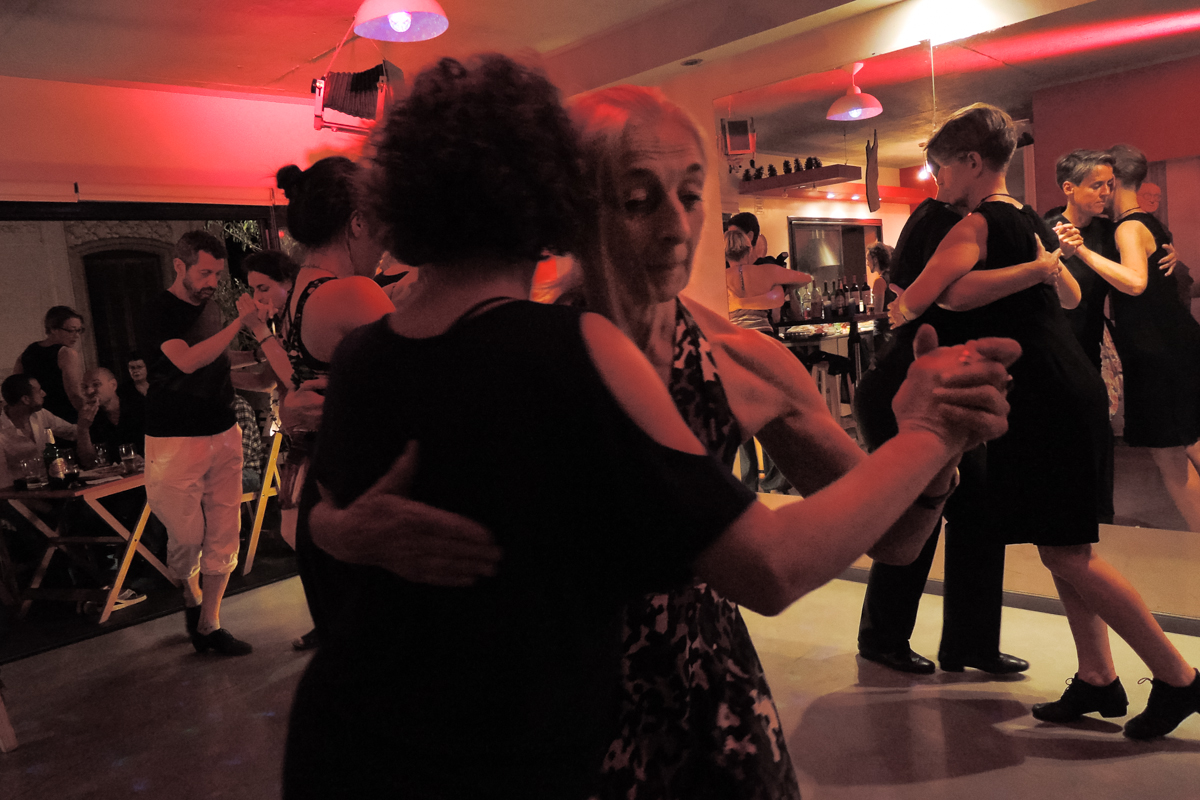 In the middle of the tango, couples exchange roles and partners, regardless of their genders.

The lead dancer now becomes the person being led. In this milonga, which refers to a tango club in Argentina, everyone dances in an embrace.

Same-sex pairs of tango dancers would be shocking or even forbidden in many milongas, where traditional views of gender roles and sexuality rule. But at the annual International Queer Tango Festival in Buenos Aires, Argentina’s capital, the priority was to accept and promote change. Similar events are held worldwide.

In tango, a ballroom dance and musical style that originated in Buenos Aires in the 1800s, tradition dictates that only the man can lead, says Pablo Nievas, a tango performer and teacher in Buenos Aires. As the man dances, holding his partner close against him, he looks for open spaces in which to step and guide the woman.

The woman, on the other hand, is the follower, Nievas says. She interprets her male partner’s movements and moves in the direction he dictates. The dance is conceptualized as a seduction, where the man succeeds in conquering the woman.

“In a milonga, you don’t see men dancing with men, neither women with women,” he says. “It is a very discriminative environment in that sense.”

If you ask me what is my dream, what I would like to happen the most with the festival is that it disappears. That it is no longer necessary to classify queer activity, so people can dance however and with whomever they want. Augusto Balizano, one of the festival organizers

Buenos Aires’ International Queer Tango Festival was born of this discrimination, says Augusto Balizano, a tango performer, instructor and one of the festival organizers.

“If I wanted to go dance tango with another man, there was nowhere, it couldn’t happen,” he says. “No one had gone to dance with someone of their same sex, nor felt encouraged. Tango has been consolidated with the stereotype, man and woman.”

The festival first occurred in 2007 as a way to connect likeminded dancers and instructors from around the world. Since then, participants have danced and collaborated to promote spaces where all dancers can move freely, Balizano says. This year’s Buenos Aires event took place from Nov. 16 to Nov. 22.

Balizano, who is gay, says he loves the festival because it allows people like him to feel free to be themselves and make their own choices in a supportive environment.

Monika Sackarndt traveled from Germany to participate in the festival.

Sackarndt says she learned how to dance tango three years ago in Berlin.

But, she says, she does not feel welcome in the traditional milongas in Berlin when she attends with her partner, a woman. She says she feels people in Buenos Aires are much more open to the idea and sight of unconventional pairs.

“In Berlin’s traditional milongas, we are not allowed to dance with the shoes we want,” she says. “If you are a woman you can only dance with high shoes.”

Tonight, she is dancing with the shoes of her choice, she says. 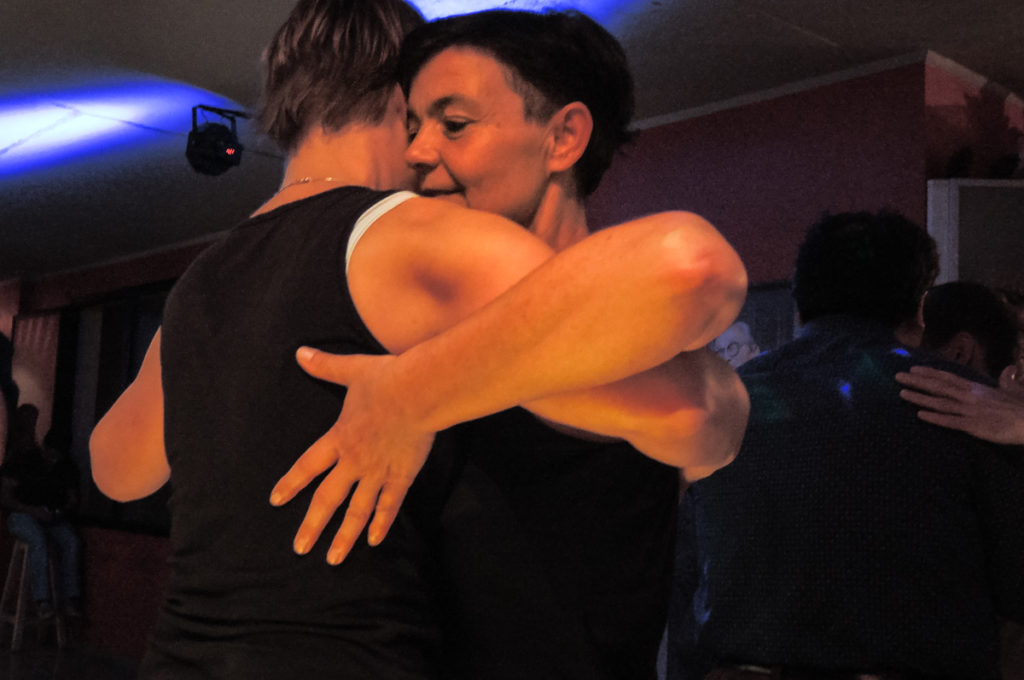 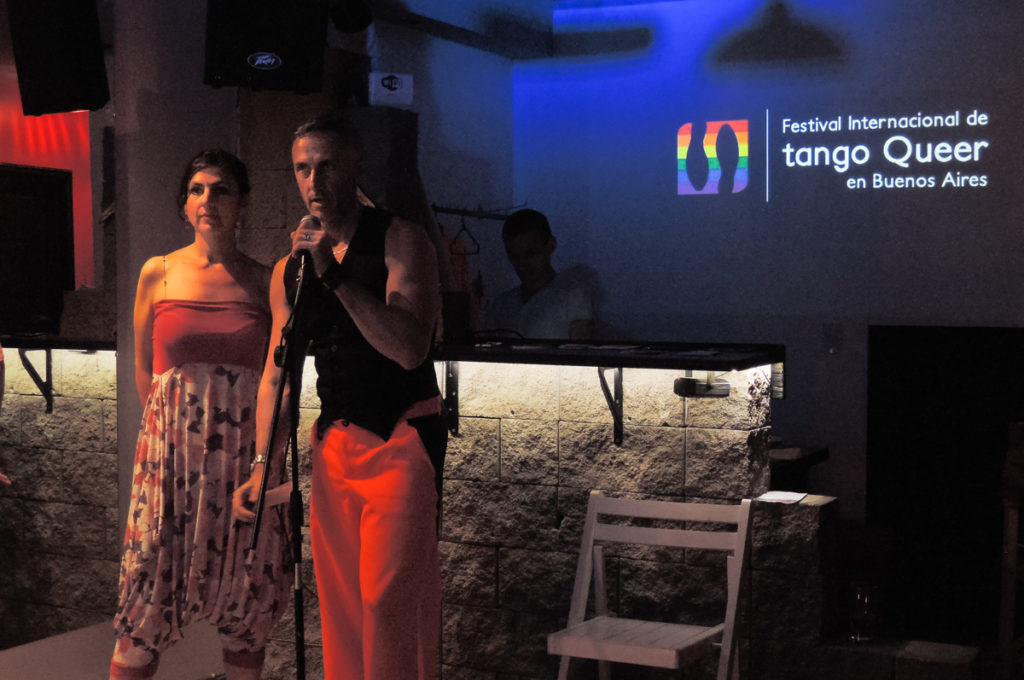 Mariana Docampo (left) and Augusto Balizano, organizers of the festival since it began in 2007, announce the start of the first night of dancing. This year’s festival took place from Nov. 16 to Nov. 22. (Lucila Pellettieri, GPJ Argentina) 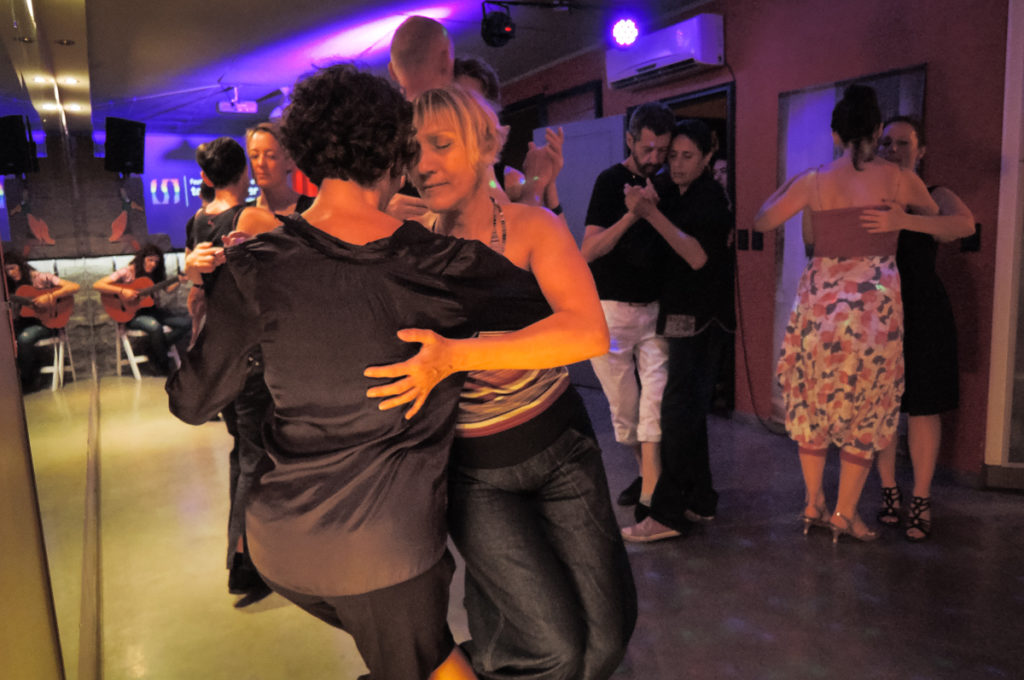 Participants dance on the first night of the International Queer Tango Festival in Buenos Aires. Tango traditions dictate dancers should be male and female, with the man as the lead. But at the festival, same-sex couples can dance with one another and any gender can lead. (Lucila Pellettieri, GPJ Argentina) 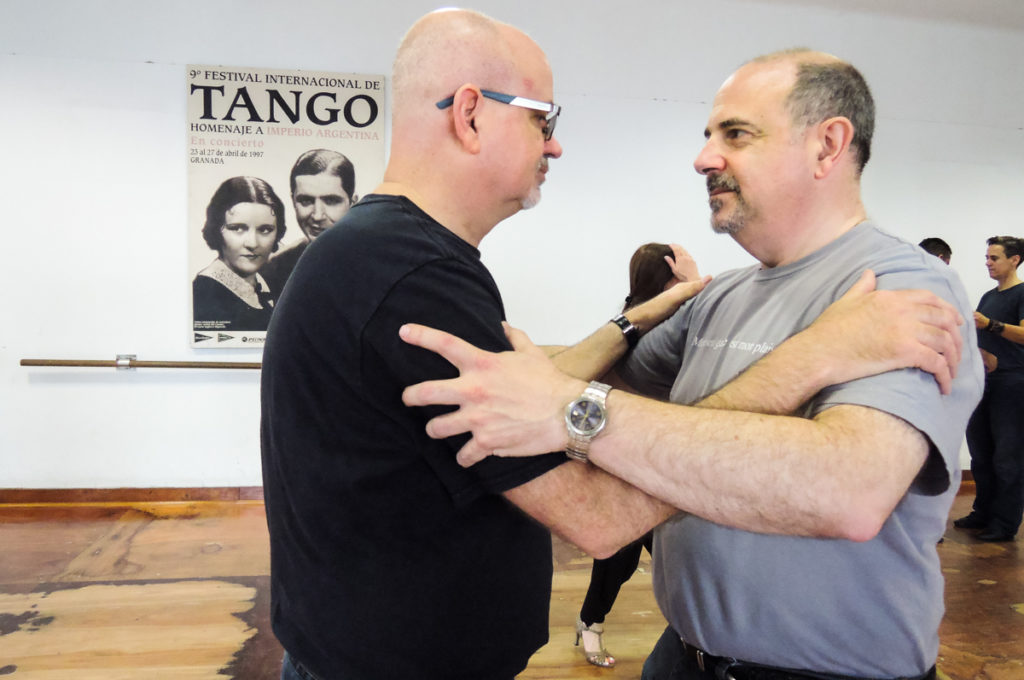 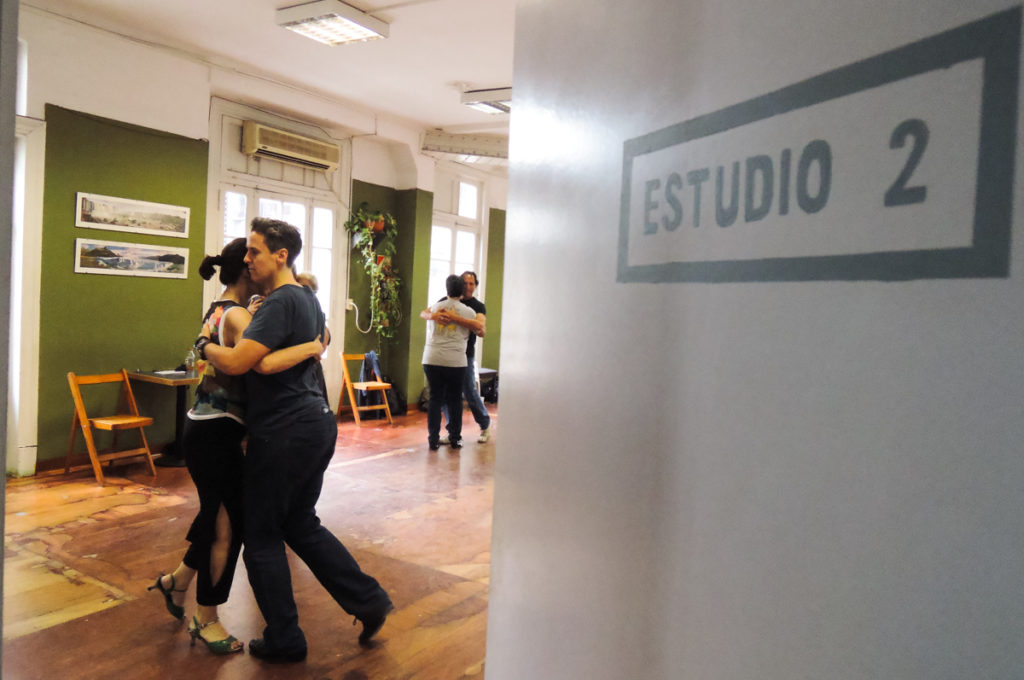 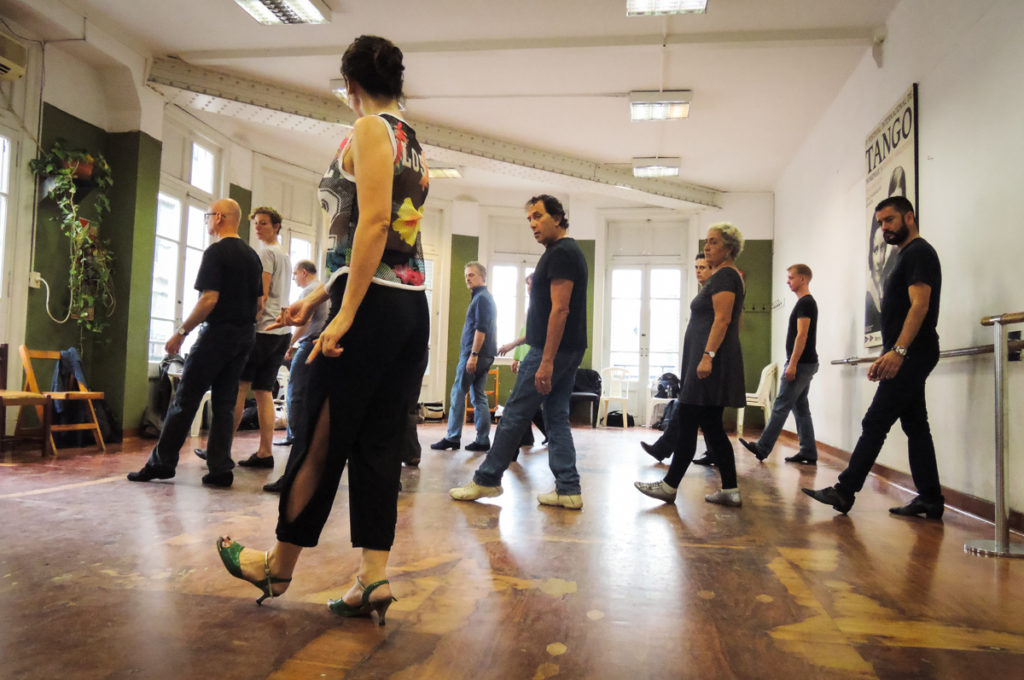 Knowing where to walk and where to place one’s body weight are two secrets to dancing tango well, says Docampo, seen here in the foreground leading students in an exercise. (Ivonne Jeannot Laens, GPJ Argentina) 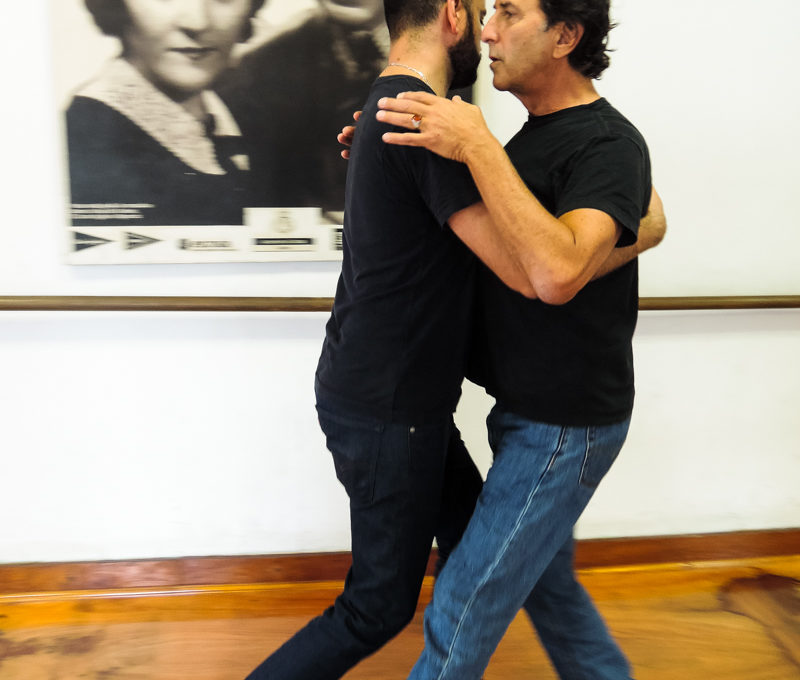 The workshops provided students with the opportunity to dance with a partner of any gender. Before beginning to dance, the lead is identified, but couples can change roles in the middle of the dance. (Ivonne Jeannot Laens, GPJ Argentina) 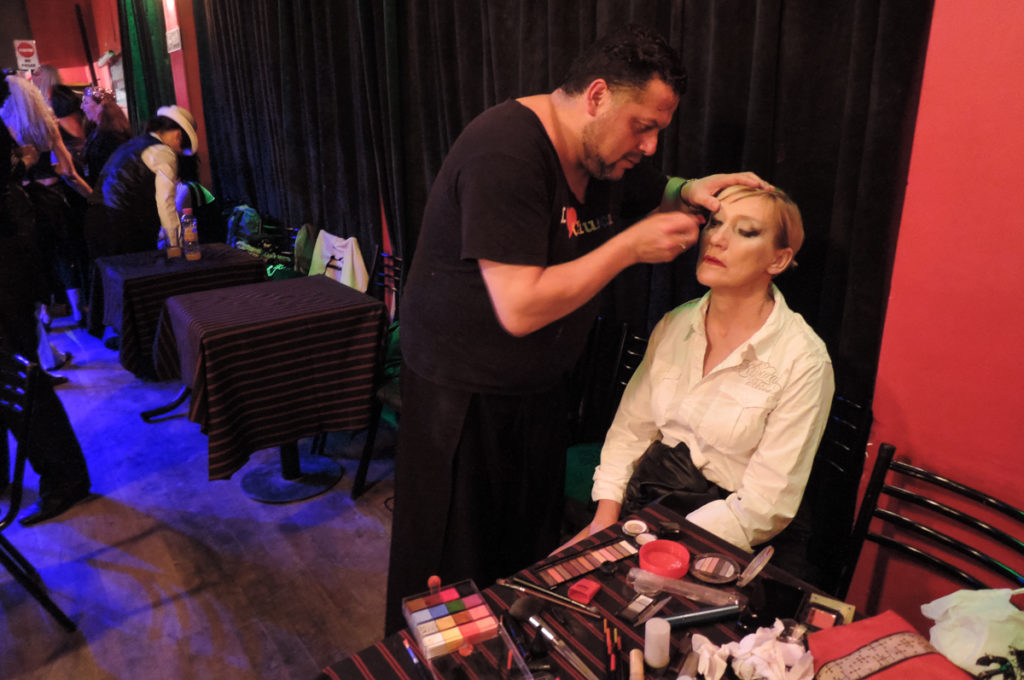 Participants dressed in drag at one of the evening dance parties. “With activities such as this festival, a more communal experience is achieved, because in these gatherings we share experiences of struggle, work experiences and even emotional (experiences) that occur in different places,” says Pedro Fernando Muñoz, who applied makeup to many of the night’s dancers. (Lucila Pellettieri, GPJ Argentina) 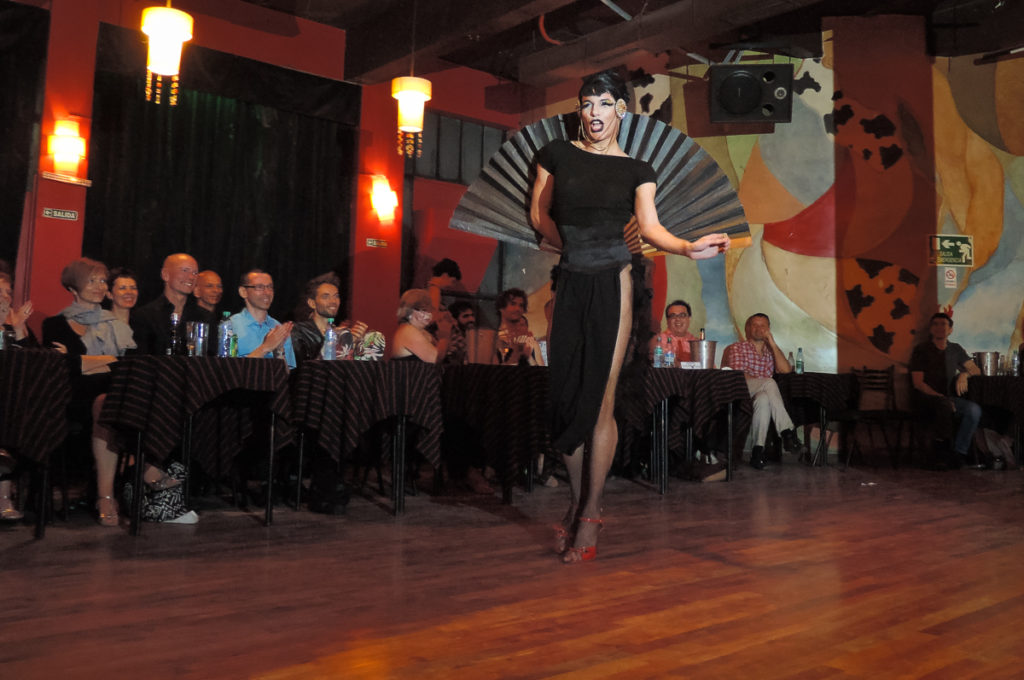 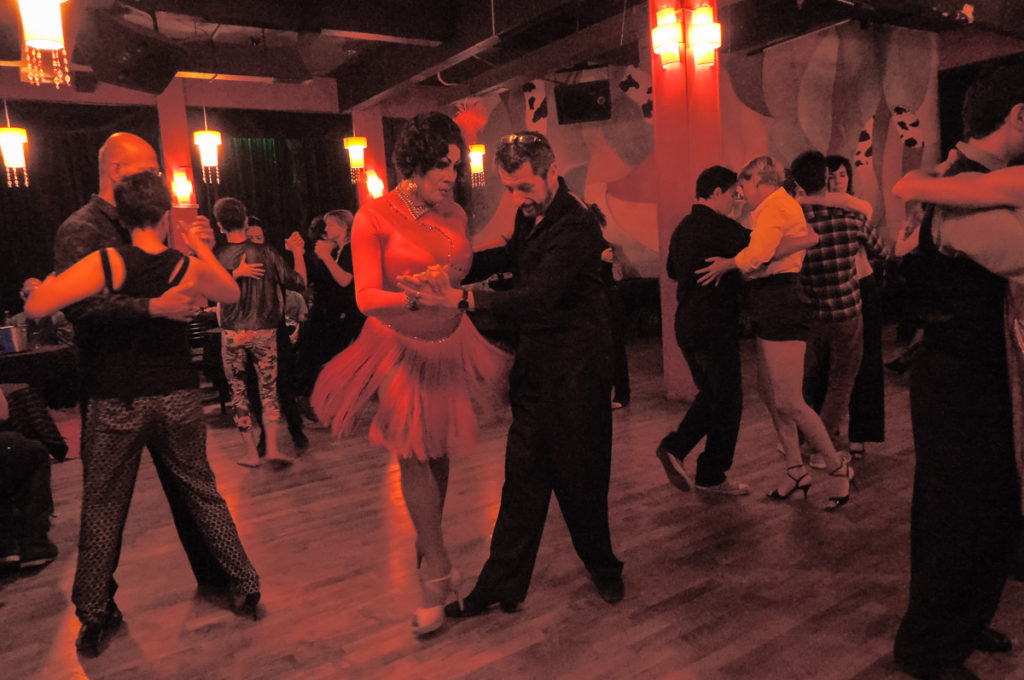 The winner of the best-dressed competition was Martín Bellier, seen here on the left in the red dress, as “Rubí,” a shy widow who seeks to marry a millionaire husband, he says. “For me, queer tango is rewarding, not only for the gay world, but for all,” he says. (Lucila Pellettieri, GPJ Argentina)

In queer tango, Liliana Furió says she found the possibility of dancing with other women, as well as asking men to dance so she can be the lead. Furió attended the festival as a participant as well as for research for her upcoming documentary about queer tango around the world.

Furió says she was once kicked out of a milonga for dancing with a woman.

“The owner approached and told us that kind of dancing was not allowed in that milonga,” she says. “He kicked out us in a very violent way.”

Rules such as these don’t apply in the few queer tango milongas, organizers and participants say.

According to queer theory, the links between a body and the role it plays are arbitrary, says Moira Pérez, a philosophy professor at the National University of Lomas de Zamora in Buenos Aires province. She also hosts workshops on queer theory throughout the city.

“Queer raises the idea that there is no fixed identity, and the change of roles has to do with the fluidity of the change of the people,” she says.

Balizano says the festival gives people space to be free and different, but he also hopes queer tango will soon find acceptance in tango culture.

“If you ask me what is my dream, what I would like to happen the most with the festival is that it disappears,” he says. “That it is no longer necessary to classify queer activity, so people can dance however and with whomever they want.”