Skip to main content
The story you are reading was published on Sunday January 17, 2016. To read more recent stories click here. 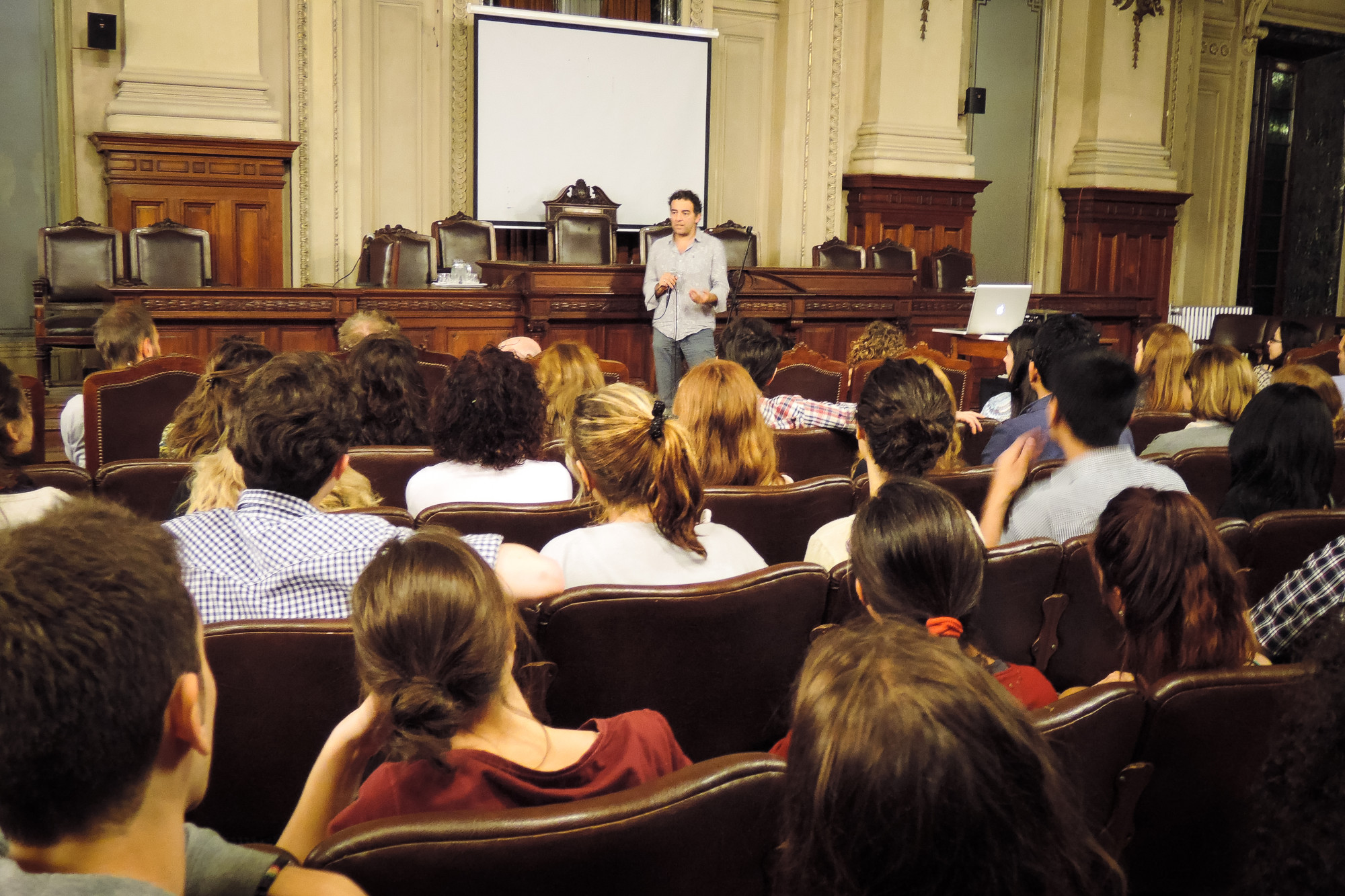 BUENOS AIRES, ARGENTINA – Víctor Núñez’s gaze is fixed on his laptop screen, and he clicks and types without pause. The 19-year old is completing a school assignment to write computer code.

Núñez studies programming and computer science at María Sánchez de Thompson, a public technical school in Buenos Aires, Argentina’s capital. He says that although programming was difficult at first, he now sees it as a fun challenge.

“Learning how to program helped me become more organized and think in a different way,” he says. “Also, the teachers tell us there are lots of jobs for those who study computer science.”

The Argentine government wants to capitalize on Núñez and others like him so the country can be more competitive in the global programming and software markets, officials say.

The government announced last year the creation of a network of primary and secondary schools that this year will implement an information technology program.

If we can win the war against the lack of human resources, the sky is the limit. We have a 2020 plan to double our exports. Aníbal Carmona, president of the Chamber of Business for Software and Information Services

More than 300 schools applied to be in this network, says Fernando Schapachnik, coordinator of Program.AR, the national initiative tasked with implementing programming and computer science education in Argentina’s public schools.

Increased teacher training will begin at the start of this year as the program expands, and Argentine students will begin learning within the new program in March, he says.

The Federal Education Council declared in August that programming and information technology studies is of strategic importance schools nationwide.

“In a country where people already vote using electronic devices, bank accounts are managed by computer or automated teller machines, and the paperwork needed to register as a worker is done on the Internet, it becomes essential that people know more about how these devices work so they can exercise a quality citizenry,” he says.

Argentine leaders hope the initiative will result in more students choosing information technology careers, Schapachnik says, which the government anticipates will aid in the country’s economic development. Program.AR found that 20,000 students nationwide are studying for careers in information technology and computer sciences, he says. 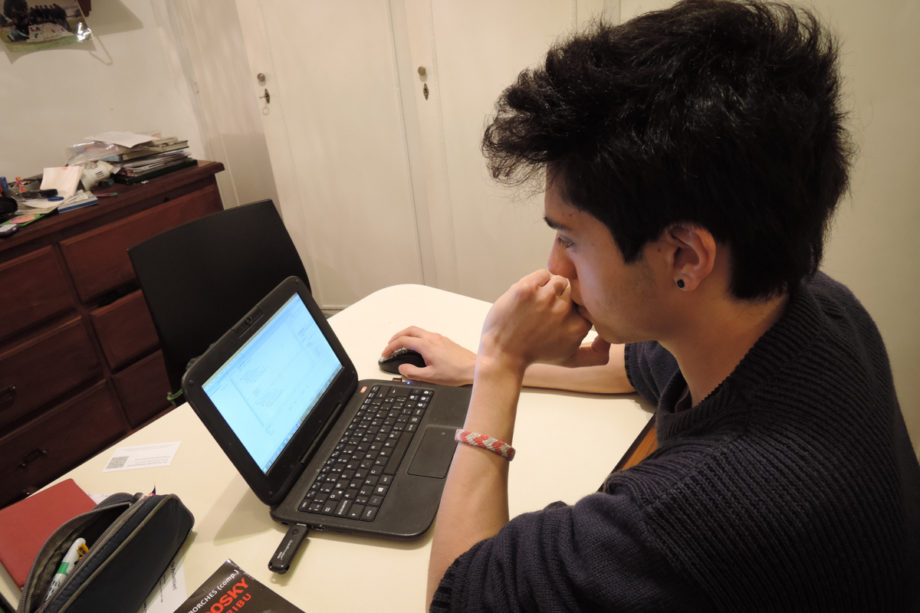 Víctor Núñez completes his programming homework on the computer that was provided to him for free by his high school.

According to a 2015 World Trade Organization report, Argentina ranked eighth among major exporters of computer services.

The European Union and India ranked first and second. Argentina is the only Latin American country in the top 10.

OPSSI reports a 33.8 percent increase in sales in pesos from 2013 to 2014, but a more than 10 percent decrease in sales in dollars, likely due to the depreciation of the peso. The group says there was 5.4 percent growth in the industry’s employment.

But the demand for labor in the industry exceeds the number of qualified people, says Aníbal Carmona, president of CESSI. That group’s research found a deficit of 5,000 industry professionals during 2014, Carmona says.

According to the OPSSI report, there were approximately 77,400 people working in Argentina’s software and computer services industry in 2014.

This deficit is slowing down the industry’s and country’s development potential, Carmona says.

Exports of computer and information services worldwide reached an estimated $302 billion in 2014, according to the World Trade Organization.

Information technology was the most resilient services sector during the global economic crisis in 2008, the organization says. This was due to demand for cost-efficient technologies; development of innovative software, especially in sectors such as manufacturing and health care; and the need to address security concerns related to information technology.

It seems to me that teaching programming to kids in primary school will confuse them a lot. I don’t know if they are mature enough to understand it. In my school, almost no one chooses the training in programming. Everyone thinks it is the most difficult. Víctor Núñez, 19, who studies programming and computer science at a Buenos Aires public school

With this in mind, the Argentine government created the network to boost its computer industry. The network links schools that were already teaching programming independently with schools that applied to teach programming, Schapachnik says.

“There are a ton of reasons why these careers are chosen less,” he says. “A strong one is that nobody sees it in school, or, if they do, it’s for office automation. This is so boring that they end up hating information technology.”

Pablo Esteban Rodríguez, a professor of information technology and society at the University of Buenos Aires, says it’s increasingly important to learn how to program in a world where computers and electronic devices govern almost every machine.

But he thinks that the way it is done needs to be reconsidered.

“People think that technology solves all problems. But technology doesn’t solve anything; it is no more than the expression of social relationships,” Rodríguez says. “There needs to be less emphasis on technology and more on who is going to implement and understand it.”

In 2015, Program.AR focused on teachers. Through an alliance with 11 public universities, the national government offered free courses for primary and secondary educators interested in teaching information technology and programming within the classes they lead today or plan to lead in the future. Schapachnik says Program.AR hopes to soon offer degrees in the teaching of programming through public universities.

More students are interested in the software industry, and the government sees it as an opportunity to take a leap forward, he says.

“If we can win the war against the lack of human resources, the sky is the limit,” Carmona says. “We have a 2020 plan to double our exports.”

“Learning to program, the student achieves a cognitive development, will develop better ways to explain, to communicate in a precise manner and to also understand that the recipient is limited in their understanding,” Del Dago says.

His concern is that in choosing information technology careers, students will abandon their studies sooner to begin working.

“Starting with the companies, workers are discouraged from finishing their university studies,” Del Dago says.

Del Dago says that happened to him. Immediately after high school, he was hired at a company. Even though he enrolled in and attended a university, he abandoned his studies in order to work more hours. It wasn’t until 2015 that he returned to university to complete his degree, he says. And as a teacher, he sees the cycle persisting.

“I see that they continue tempting students with money so they can work more hours, they offer them benefits, extra money to those who work more. That’s how they discourage you,” he says.

Matías Reggi, 23, graduated in 2015 as an engineer in information systems. He too has had companies approach him and discourage him from continuing his studies in order to work more, he says.

If students do not complete their studies, Argentina could miss out on the opportunity of fostering homegrown innovators, Del Dago says.

“The danger in that is that we lose the ability to develop technology autonomously, in order to rapidly incorporate students into the market,” he says.

National technological development and research should be a priority for Argentina this year, Del Dago says.

Núñez says he enjoys programming in school. But he questions whether teaching programming in primary school will be effective. He doesn’t see how it will be successful with much younger children, given the lack of focus on and interest in the subject among students his own age.

“It seems to me that teaching programming to kids in primary school will confuse them a lot. I don’t know if they are mature enough to understand it,” he says. “In my school, almost no one chooses the training in programming. Everyone thinks it is the most difficult.”