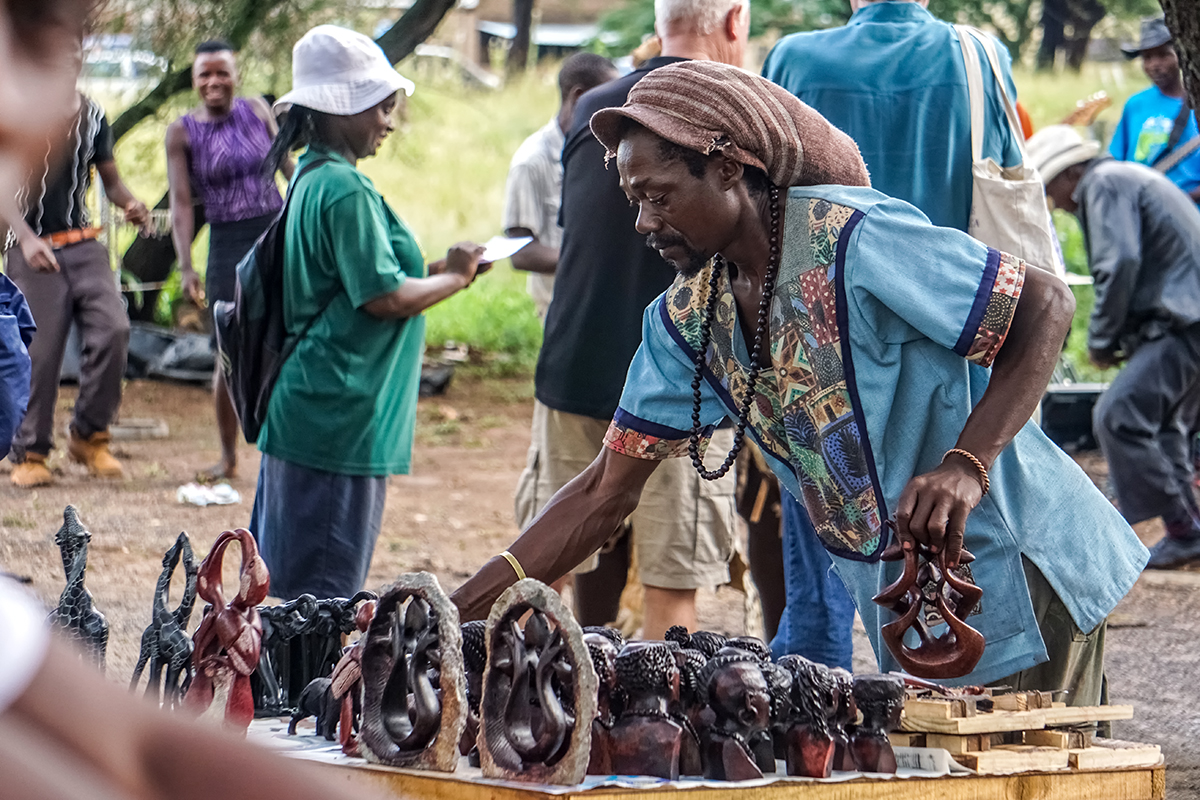 GWANDA, ZIMBABWE – A high-pitched train whistle sounds in the distance. For local artists, poets and performers, it’s a weekly call to business.

Craftsman Charles Ndlovu excitedly welcomes the train’s passengers from a stall stacked with the wooden figurines that he makes.

Gwanda, located south of Zimbabwe’s second-largest city, Bulawayo, is one of the stopover towns on Rovos Rail’s luxurious, three-night train route from Pretoria, in nearby South Africa, to Victoria Falls, one of the seven natural wonders of the world.

Since last year, Ndlovu has been selling his crafts to Rovos Rail’s riders, who are mostly retirees from America, China, the United Kingdom and other European countries, he says. Thanks to them, he makes enough money to survive in cash-strapped Zimbabwe.

“This is more than I expected from coming here every Friday,” he says of his earnings. 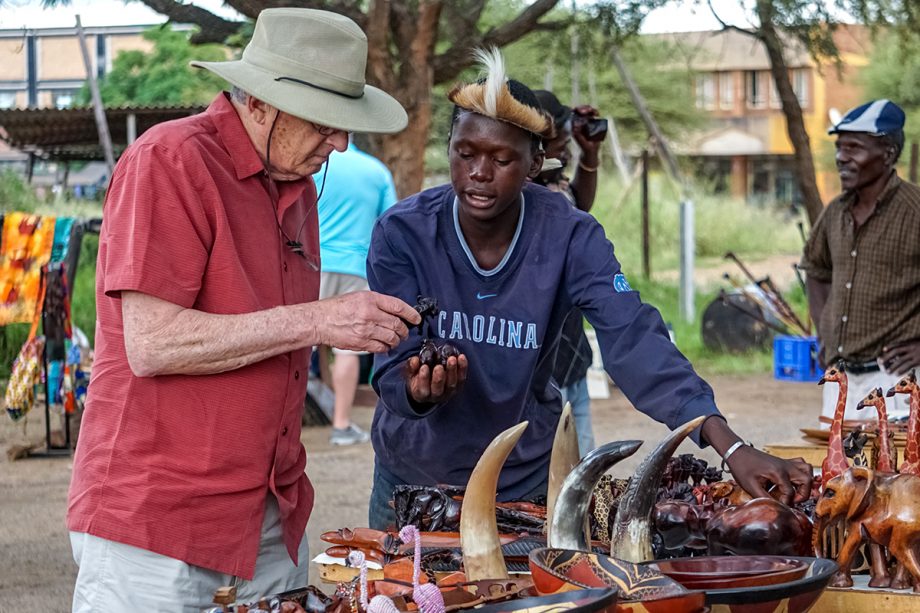 Lloyd Ndlovu, a local craftsman, talks about one of his pieces with a tourist who is traveling on the train.

Zimbabwe’s once-booming tourism sector is on the rise. While natural landscapes, game sites and historical monuments, including Victoria Falls, Matobo Hills and Hwange National Park, are hugely popular among international visitors, travel within the southern African country is evolving. With high-end tourist experiences come jobs. In Gwanda, a community of artisans is reaping the benefits.

For years, Zimbabwe’s shaky economy has hindered growth in its tourism sector. But that is changing. In 2016, travel and tourism contributed $1.1 billion, about 8 percent, to Zimbabwe’s gross domestic product, according to the World Travel & Tourism Council. International-tourist spending generated even more in 2016: a total of $2 billion.

The amount is expected to increase, experts say, and so will the number of people employed in the tourism sector.

South African-owned Rovos Rail charges between 24,850 and 49,750 South African rand ($1,805-$3,614), which is also one of Zimbabwe’s legal tenders, for the journey through Gwanda, a predominantly agricultural town with a growing group of artists. 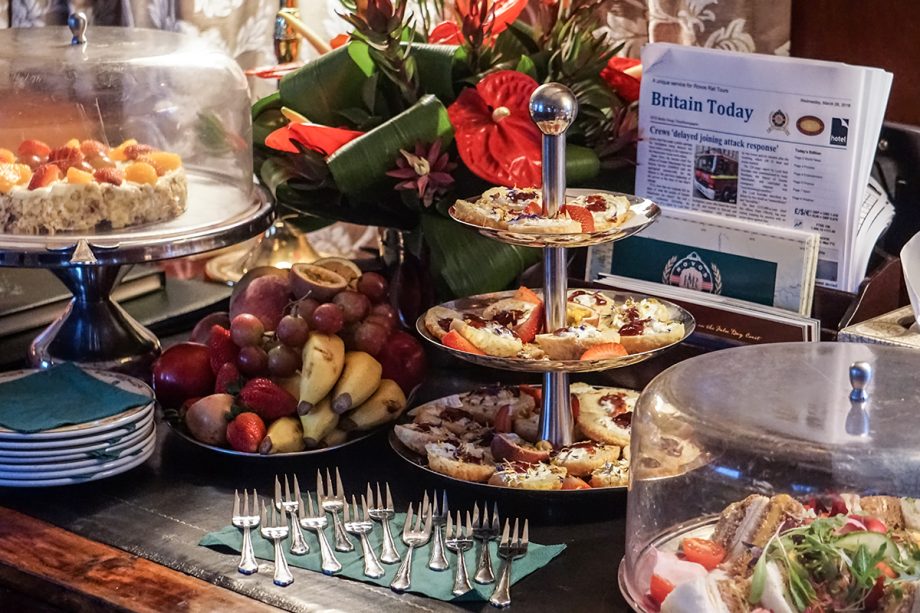 From food to lodging, Rovos Rail provides a luxury experience to riders.

Raymond Mauba is key to this community. When the train started passing through Gwanda in 2017, Mauba, founding director of the Gwanda Cultural Artefacts Association, says the stop lasted 45 minutes. Mauba, also an artist, thought of the stopover as an opportunity to make sales. To sell their art, most people here had to travel to neighboring towns or to attend cultural festivals, he says. Mauba befriended one of the train managers and convinced him to extend the Gwanda stop to two hours.

Travelers have welcomed the longer break, says Brenda Vos, communications manager for Rovos Rail. It’s a chance for riders to witness Zimbabwean culture and to challenge misconceptions, she says.

“The Gwanda experience is unique for our travelers, as it is not necessarily tourism, but a break from the sheltered existence that some of the travelers have, especially about the continent,” she says. 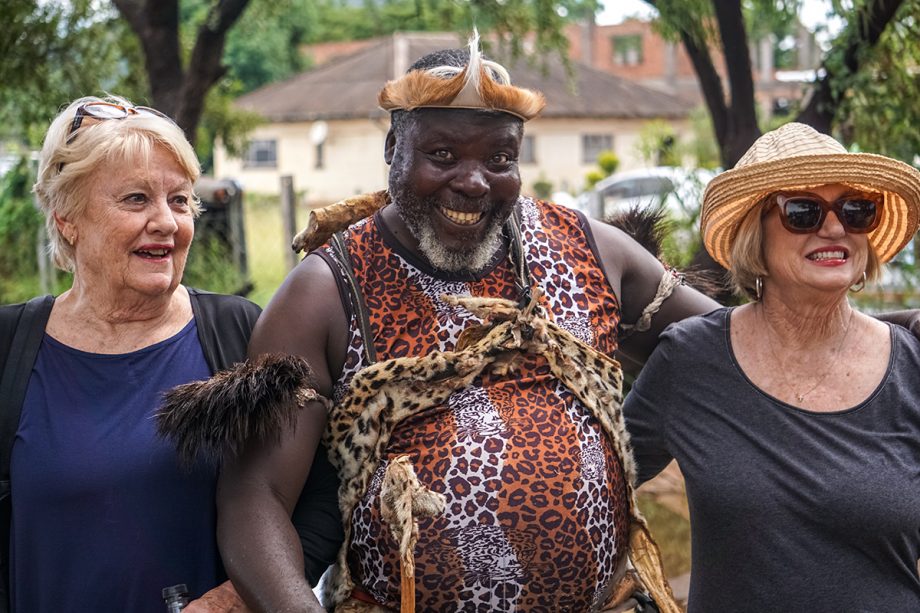 Lerato Ndlovu, a local poet, poses with two tourists at the Rovos Rail train terminal in Gwanda. Ndlovu, who goes by his stage name, Qindi, performs here each Friday to welcome riders and to earn money.

The trackside traders share an uncompromising business acumen, and their buyers are well-to-do, says Jeremy Knowles, a tour guide with Alumni Holidays International who is accompanying 25 American tourists to Victoria Falls. The two complement each other, he says.

Ndlovu, 42, creates art specifically for the travelers. He says he makes $60 on a good day.

Alison Dube, a part-time pastor and craftsman, works in Gwanda each Friday afternoon when the train passes through. Before, he conducted most of his business in Bulawayo, where he lives. In addition to making his own art, Dube buys and resells crafts from others.

His success as a vendor comes from studying his clients, he says.

“When the train has a lot of Australians, it’s obviously a low business day,” he says. They don’t usually buy wooden items, he explains. “The Chinese prefer tiny artifacts, and the Americans are our biggest market.” 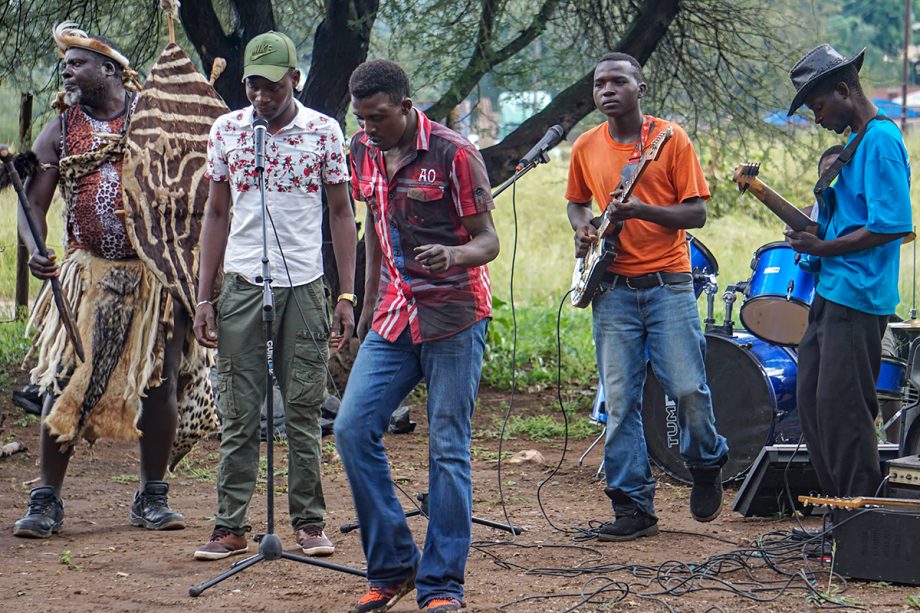 For Mauba’s sister, Mpokiseng Mauba, making and purchasing art for resale ensures that she has a variety for potential buyers. This is essential to keeping business steady.

“This has changed my life a lot,” she says.

To further grow the trade, local artisans are partnering with the National Arts Council, a government organization, says Nokuthula Moyo, provincial arts manager for Matabeleland South, one of the country’s 10 provinces.

Some artists are not able to make it to the train stop each Friday, because they live and work far away or in areas where travel is difficult. Moyo says his organization helps these artists transport their products to the town center, where tourists can buy them. Other tasks on the council’s agenda include the construction of additional village cultural centers, where arts and crafts can be displayed, and the promotion of fair trade.

Editor’s Note: Charles Ndlovu and Lloyd Ndlovu are related. Lerato Ndlovu is not related to either of these sources.