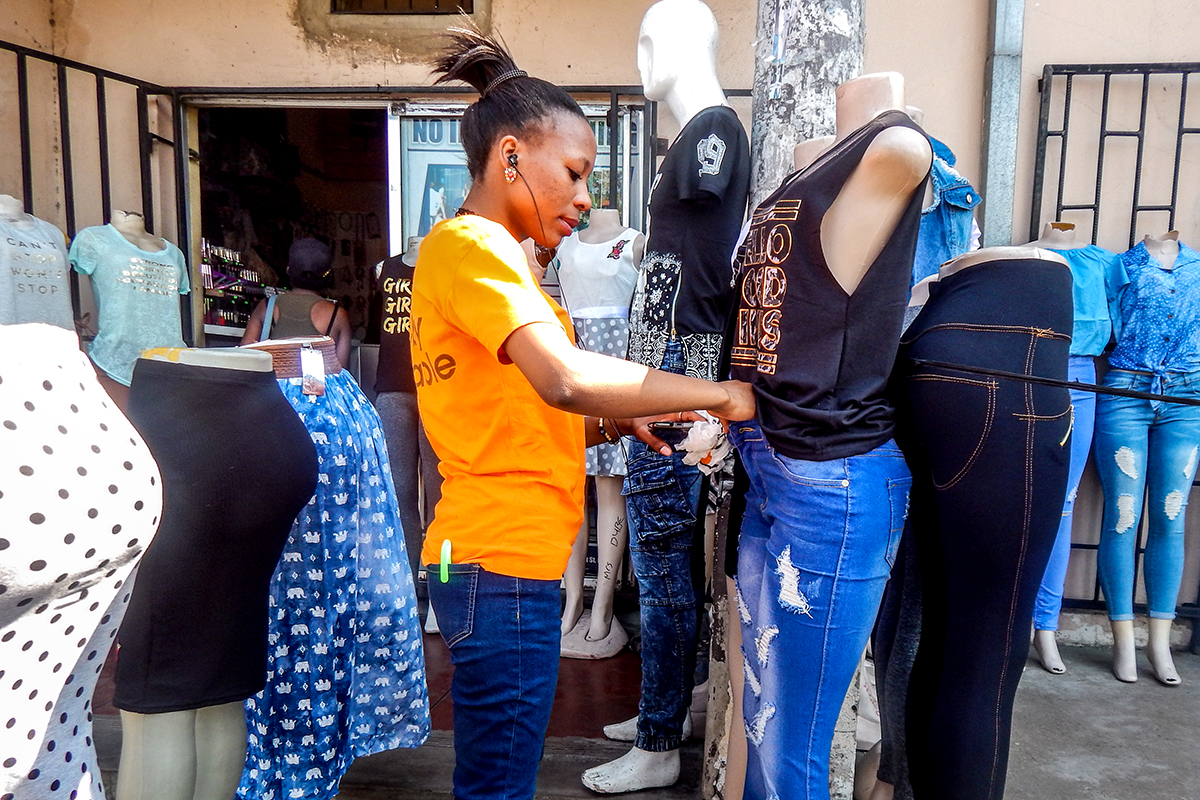 BULAWAYO, ZIMBABWE – Rachel Dube paces in a dimly lit clothing shop. She casually greets and assists customers as they peruse a colorful selection of previously-owned T-shirts, dresses, hats and shoes.

Dube works as a sales assistant at Best Buys, one of at least 10 Chinese-owned shops that have opened this year in Bulawayo, Zimbabwe’s second largest city. Many of the new shops employ Zimbabweans as sales associates and managers, but they stock items mostly from China.

Dube says she is happy about her job at Best Buys even though some of the city’s residents prefer not to shop there because they think the quality of the items for sale is poor.

“I agree that some of the products may not be of excellent quality but my job is to sell. And I am grateful I am employed and have a source of income,” she says. Chinese-owned shops in Bulawayo, which locals call ‘zhing zhong,’ sell inexpensive imported goods from China, such as clothing, kitchenware and household furniture. Some residents prefer these stores because they offer affordable goods. But others argue that these shops sell very low-quality items that are not durable, and that they have been undercutting local Zimbabwean-owned businesses.

Chinese nationals began moving to Bulawayo about 10 years ago to invest in mining and other industries. But economic cooperation between China and Zimbabwe dates back to Zimbabwe’s independence in 1980, when diplomatic relations between the two states were established.

In 2015, a year before the Reserve Bank of Zimbabwe introduced bond notes in an effort to mitigate cash shortages, the Chinese yuan became legal tender in the country, in addition to the U.S. dollar, South African rand, Botswanan pula and others.

Despite the introduction of multiple currencies and bond notes as legal tender, the economic status of the country remains desperate. The majority of Zimbabweans are still cash-strapped and estimates of the unemployment rate vary widely, from 11 percent according to the Ministry of Finance to as high as 95 percent according to independent auditors. Experts say the lack of purchasing power has contributed to the decline in demand for Zimbabwean goods.

On Dec. 7, newly-appointed finance minister Patrick Chinamasa delivered a speech on the 2018 national budget statement in parliament. In the statement, he cited the government’s dedication to increasing the promotion of local goods and services and reducing imports.

But this is not the first time that the government has addressed reducing imports. The Control of Goods Regulation, a piece of legislation intended to regulate imports, was introduced in 2016. Morris Mpala, an economist, says the government issued the law to increase domestic production. But he says the law is irrelevant because the government is unable to monitor the import of previously-owned goods, which means that local manufacturers will continue to face overwhelming competition, hindering production.

Bulawayo resident Nothando Mpala, who is not related to Morris Mpala, says that low-priced Chinese goods are often the only option for people who cannot afford to shop in the Zimbabwean department stores across the city, which are targeted at middle- and high-income families.

She adds that some of the Chinese goods, though considered low quality, can last for a long time.

“The argument about durability of these products depends on how one takes care of their items. A coffee mug is a coffee mug, and it can break even if you purchase an expensive one,” says Nothando Mpala.

Nomsa Ngwenya, who prefers to shop at Zimbabwean-owned shops, disagrees.

“China shops sell poor-quality [items], especially the shoes. You cannot wear a pair for more than a month.”

Ngwenya says she would rather spend more money on clothes to ensure that she can use them for a long time.

In Chinese shops, a pair of shoes costs $1, but the minimum price for a pair of shoes at Bata, one of the country’s oldest shoe stores, is $15. Bata is a Swiss-owned franchise, but it has a manufacturing plant in Gweru, a town about 158 kilometers (98 miles) from Bulawayo. Zimbabweans make up 99 percent of the store’s employees, including senior management.

Philani Mbambo, who works at Bata, says that they have not been affected by the influx of Chinese-owned clothing shops in Bulawayo.

“Bata Shoe Company has been in existence for over 100 years. That should say a lot about the quality of our products,” he says.

The company has been making shoes since 1894, but has operated in Zimbabwe since 1938. 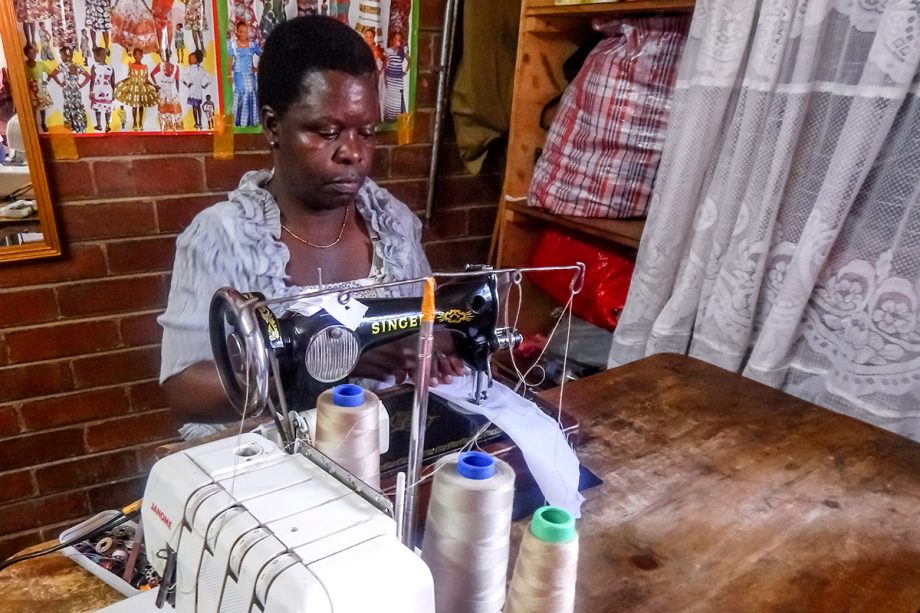 Seamstress Gadzirira Dube sews clothes at her tailoring business in Bulawayo, Zimbabwe. Small businesses like Dube’s have lost clients since Chinese-owned shops have opened in Bulawayo.

Store owners in Bulawayo say that their customers’ demand for quality, despite the cash shortage, is what drives business their way instead of toward Chinese-owned shops.

Linda Mthembu, a sales associate at Edgars, a Zimbabwean-owned clothing store, says that their business is not affected by Chinese shops.

“We have our clientele that wants quality guaranteed for the products they buy. They always come to us.”

However, Gadzirira Dube, who has been a seamstress for 20 years, says that she has lost several clients since the Chinese shops opened in Bulawayo.

“People now calculate the cost of buying material and the labor I will charge them. The total amount becomes more than buying clothes from the China shops,” she says.

Dube says that she used to make shirts, blouses, pants and skirts that look like those found in Chinese shops because she used similar cotton-based fabrics. These fabrics are cheaper than African textiles, she says. But now she has resorted to using African textiles because she wants her work to stand out and attract customers.