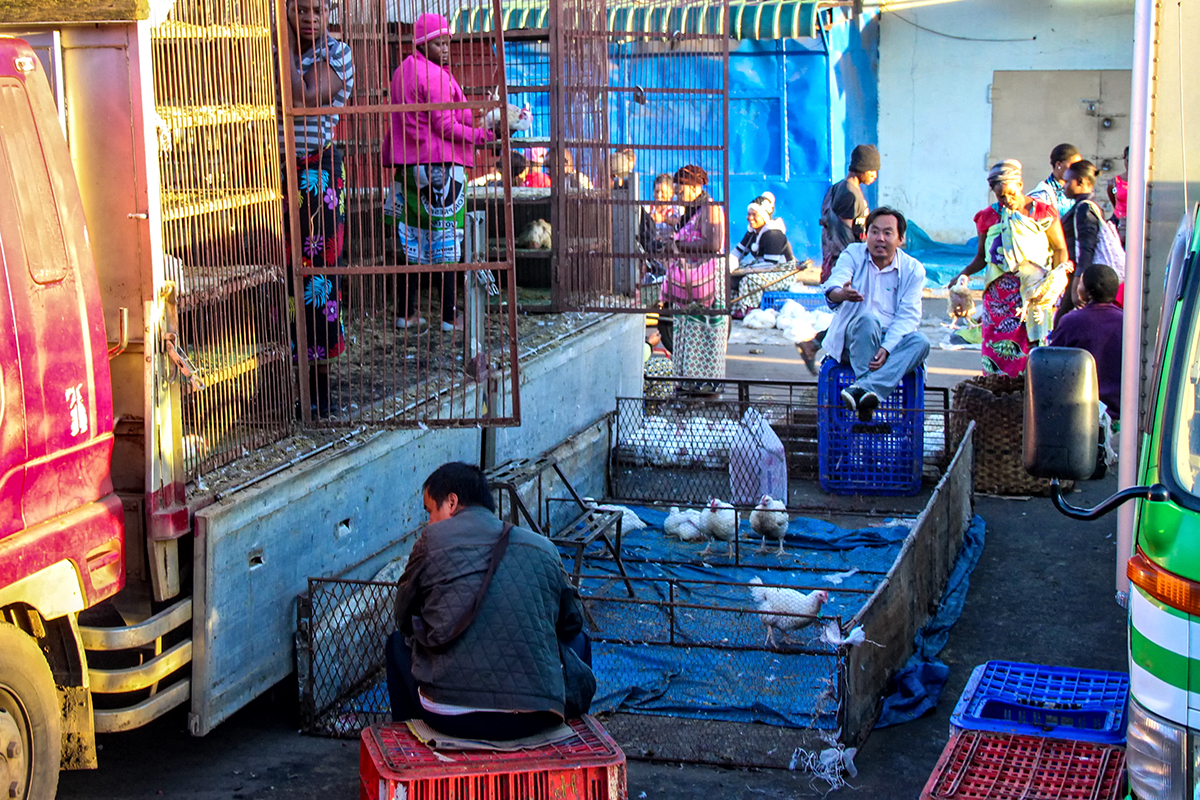 LUSAKA, ZAMBIA — The sound of squawking gets louder as chickens are unloaded from their crammed quarters on a truck in Soweto Market, the largest market in Zambia’s capital.

Female traders sort the chickens, returning some to the truck and putting others aside to be sold.

Sarah Munanga grips the wings of a chicken and weighs it with her hands, hoping to find the heaviest bird in the bunch. A poultry farmer-turned-vendor, Munanga says she comes here almost every day to buy broiler chickens bred by Chinese businesspeople.

“We buy the chickens from the Chinese and later resell [them], because their chickens are cheaper,” she says as she hands money to Xu Xuefei, a poultry farmer, for the day’s sale.

Xuefei agreed to be named, even though it is illegal in Zambia for a foreigner to sell the live birds. He says he’s not doing anything wrong. 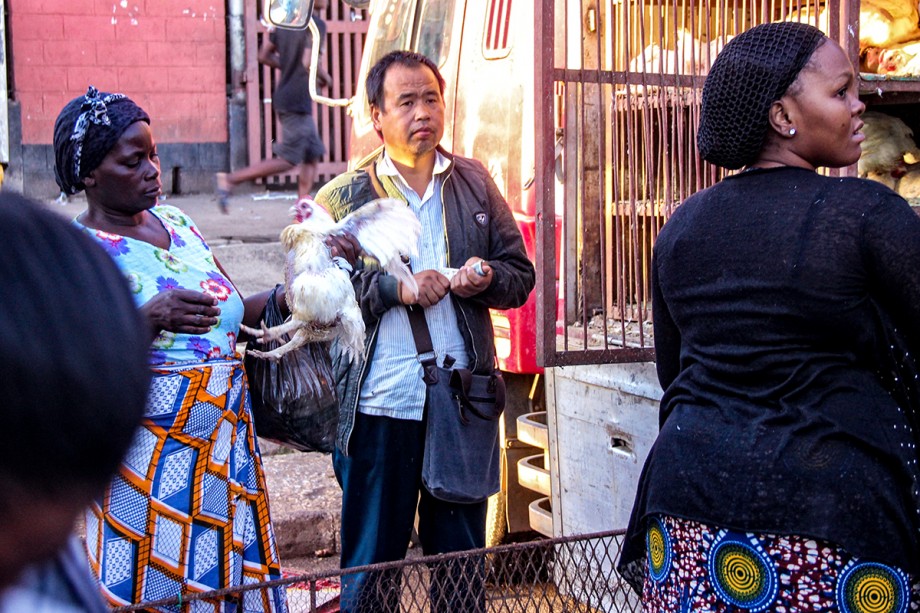 Xu Xuefei, a Chinese national, has been selling chickens at Soweto Market, one of Zambia’s busiest, since 2015.

Raising poultry is common among Zambia’s small-scale farmers. But despite a law that prohibits non-Zambians from selling live birds, Chinese migrants are increasingly raising and selling broiler chickens, which are raised specifically for their meat. While some Chinese workers say they are unaware of the government regulations, Zambian farmers say the growing trend is limiting their livelihood.

Zambia’s poultry industry contributes 4.8 percent to the agricultural gross domestic product, according to a 2015 study from AgriProFocus, a network of agribusiness professionals in Africa, Southeast Asia and the Netherlands.

Chinese-owned companies are known for their contributions to the mining and infrastructure sectors across sub-Saharan Africa. But since 2007, experts estimate that the number of Chinese entrepreneurs in agriculture, especially chicken farmers, has grown in Zambia.

Though there is no current or reliable data on the number of Chinese-owned poultry businesses in the country, advocates say the farming and sale of chickens by Chinese nationals is on a scale large enough to harm Zambian farming businesses.

There are approximately 80,000 Chinese people living in Zambia, according to 2018 figures in the World Population Review.

We buy the chickens from the Chinese and later resell [them], because their chickens are cheaper.Sarah Munanga, a poultry farmer-turned-vendor

Last year, in an effort to curb unfair competition against locals, the government banned the sale of live birds by traders from other countries in markets or in any other places designated by law. Breaking the law can result in a fine of 750 Zambian kwacha ($79), two years in prison or both. Despite these penalties, some say the new legislation is not effective.

After nine years as a poultry farmer, Munanga says she was forced to look for a new job to make enough money to take care of her family, because she could not compete with the Chinese entrepreneurs who were raising the same type of chickens.

Before the sale of chickens became common among Chinese entrepreneurs in Zambia, Munanga says, her profit margin was about 70 percent of her cost of production. But now the 59-year-old, who sells Chinese-farmed chickens, only makes a profit of 3 kwacha (32 cents) on each bird she buys for 37 kwacha ($3.85). Chickens reared by locals cost anywhere between 40 and 45 kwacha ($4.17 and $4.70).

A lack of money, a lack of other resources, and limited access to feed are among the reasons why Zambian farmers aren’t as successful as Chinese farmers and salespeople, says Dominic Chanda, executive manager at the Poultry Association of Zambia.

“You find that a Chinese man is buying thousands of chicks, so instead of buying the chicks at a retail price, he will buy at wholesale price from the hatcheries,” he explains. “Even the feed would be bought at wholesale.”

Chanda says the law only stops people from selling the chickens at markets, but it does not regulate poultry production. It also does not prevent Chinese and Zambian traders from selling the birds together, an ideal partnership for some, he says. 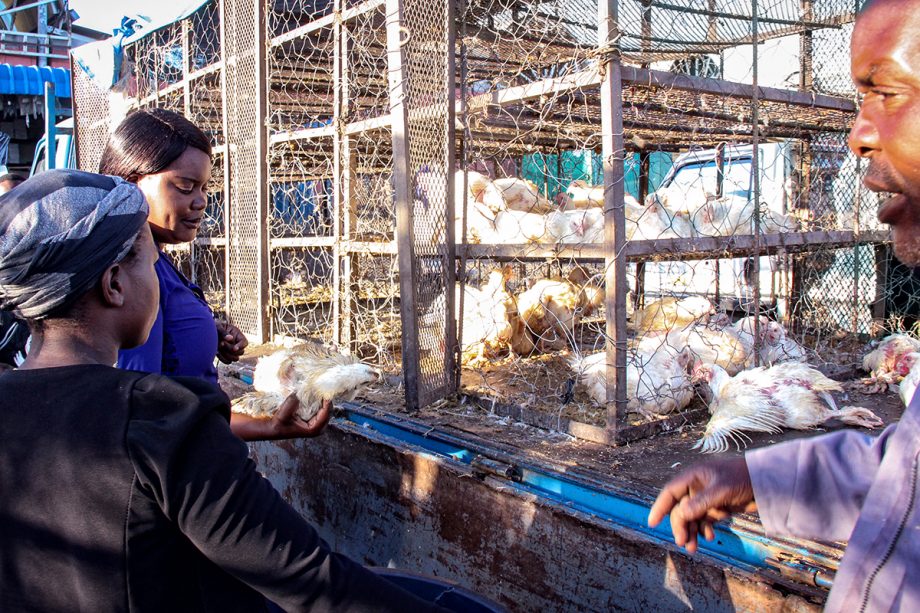 Zambian customers select chickens they’d like to buy from Chinese vendors at Soweto Market in Lusaka, Zambia’s capital. The chickens are cheaper than those farmed by Zambians, the patrons say.

But it’s not easy to spot those who have entered into such partnerships.

“It is difficult to know if a foreigner at a market has partnered with a local person, because to know that you need the law enforcers, the police; you need to check the Zambia Revenue Authority; you need the Patents and Companies Registration Agency – and it’s difficult for anyone to be moving around with such documentation,” Chanda says.

Xuefei runs a farm and sells chickens on his own, though he says he’s open to working with Zambians.

“I came from China three years ago, and no one has ever told me we are not to sell chickens here,” he says.

“We have a formula of making feed, which makes it cheaper, especially when prices of feed go up,” he says.

Yang Youming, China’s ambassador to Zambia, and other officials urge the Chinese to abide by the law, but some Zambian poultry farmers welcome the competition, because efforts are underway to help local businesses thrive.

Joseph Simukoko, a small-scale chicken farmer, says Zambians, in order to compete, should observe how the Chinese run their businesses and should change the way they farm.

“We can’t chase the Chinese,” he says. “All we need is to learn from them. If we chase them, there will be a vacuum in the poultry industry.”

Chanda’s organization hosts training for small-scale farmers at least five times a year, teaching them how to maximize profit in poultry production. The group is also lobbying for loans from financial institutions to assist farmers in production, he says.