Skip to main content
The story you are reading was published on Monday October 10, 2016. To read more recent stories click here. 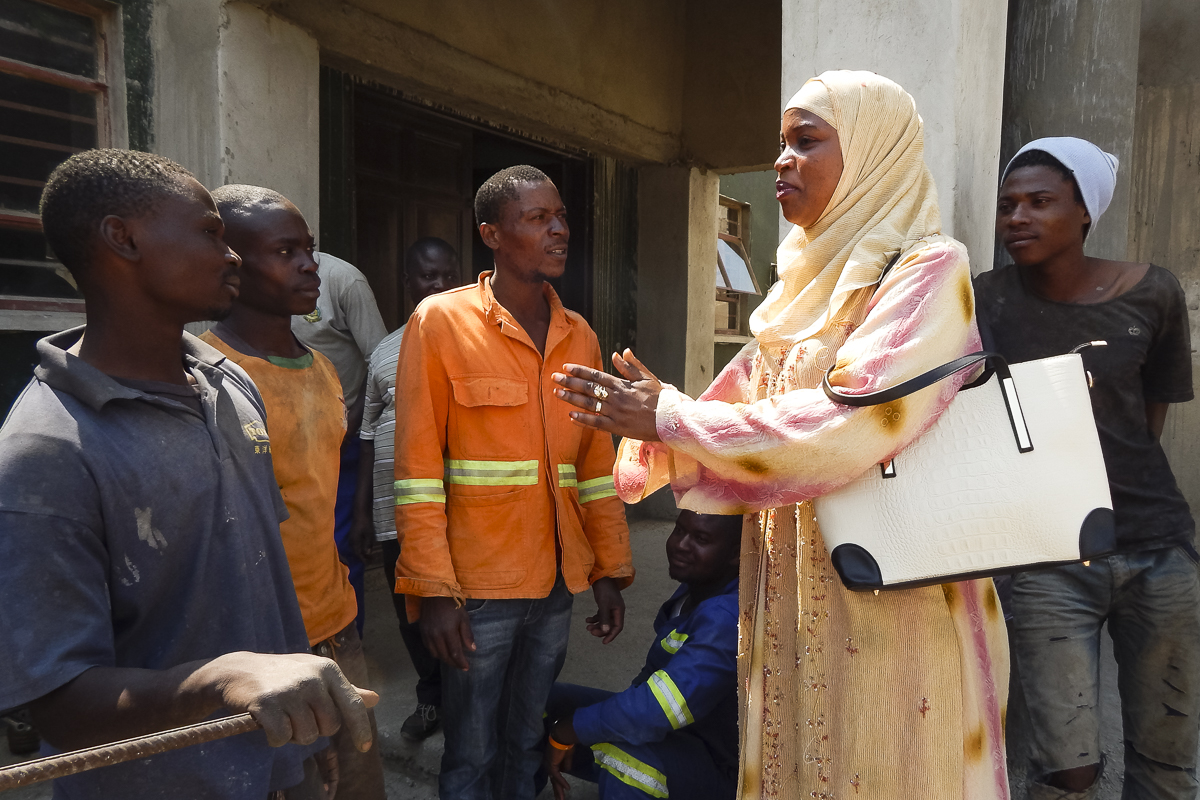 LUSAKA, ZAMBIA — Sirre Muntanga, dressed in a long brown frock and her hair covered in hijab, a veil traditionally worn by Muslim women, stands out from the crowd in this capital city.

She elicits a range of responses. Some men shout names of groups known for acts of terror as she walks by, while others, recognizing her from her recent election campaigns, call her “Mayor,” even though she lost the August vote, garnering about 4,200 votes to the more than 270,000 earned by winner Wilson Kalumba. Eight candidates vied for the spot.

Muntanga, 32, says she lost the election, which was her first run for public office, because of religious prejudice and discrimination. She faced both while she campaigned to be the capital city’s top leader, she says.

“Some people called me names like Boko Haram, al-Shabaab and all,” she says. “Those that were polite enough would ask me why they should vote for a Muslim. To them, Muslims are wicked.”

She also faced divisions within her own Muslim community, where people disagree as to whether a woman should be a political leader. 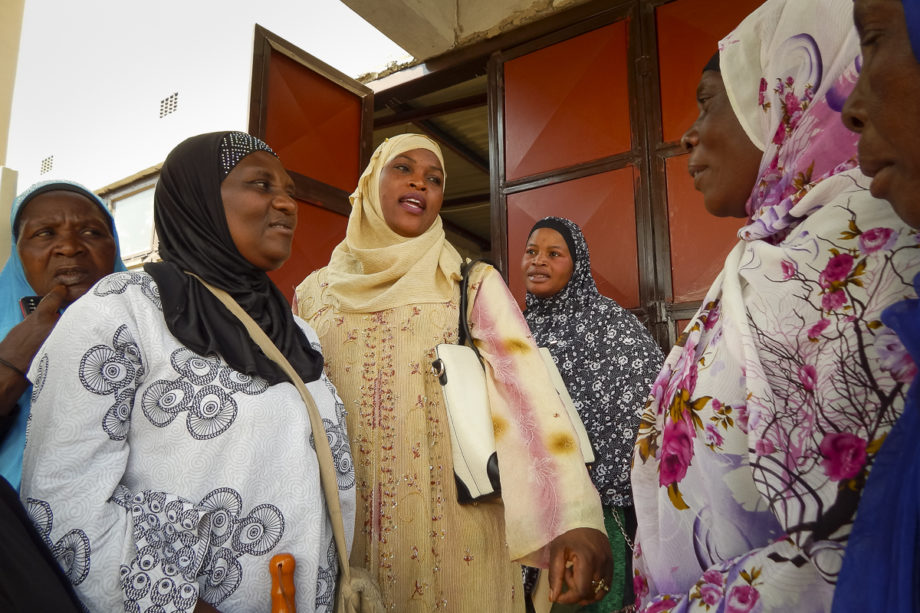 Zambia is 75 percent Christian and 20 percent Protestant, according to the country’s 2010 census. Muslims make up just 0.5 percent of the population. Zambia’s 1996 Constitution declares the country to be a Christian one, but notes that people have the freedom to choose their religion.

Muntanga was one of 40 women out of 331 candidates running for positions as mayors or council chairpersons throughout the country  in August elections. Sheik Shaban Phiri, general secretary of the Islamic Supreme Council of Zambia, says Muntanga was the only Muslim woman running for any of those offices.

Muntanga says she ran because she wants to serve the needy in her community. Religion wasn’t part of her agenda, she says, but the topic kept coming up.

“I found myself explaining to people about Islam, because most of them perceive Islam as wicked, and questioned why they should trust me as their leader,” she says.

And men from her own Muslim community had mixed reactions when she announced her candidacy, she says.

“Other men from my religion supported me, while others felt it was not right for a woman to go for a political office, but I know that my religion does not bar me from participating in politics,” she says.

Discrimination keeps Muslim women from serving in leadership roles in Zambia, says Oveliwa Banda, who has been a youth and women’s leader for local Muslims. Banda works for the Catholic Medical Mission Board, and says she was surprised to have been offered that job because she’d faced so much discrimination when looking for work.

“We are a minority religion, and those around us have not accepted us,” Banda says. “With the reports of terrorism that have been tagged to Islam, we are deemed as bad people. I have been treated as an outcast many times, starting from school and even at work.”

Some Christians aren’t shy about expressing their reservations when it comes to entrusting political power to people of a different faith.

“We are a Christian nation, and although we have allowed other religions in the country, it is difficult to trust them with political power,” says Monde Kabeta, who identifies as a Christian.

Muntanga ran for mayor as a member of the Forum for Democracy and Development, one of Zambia’s opposition parties.

Yussuf Ayami, the executive director of the Zambia Interfaith Networking Group on HIV/AIDS, says prejudice against Muslims in a Christian-majority country is to be expected.

“People are apprehensive to anything that is different,” Ayami says. “People tend to be comfortable with what they know. When you have a country whose majority is Christians and what they have known is just Christianity, there is bound to be that apprehension.”

Lack of knowledge about other religions drives the prejudice, he says. 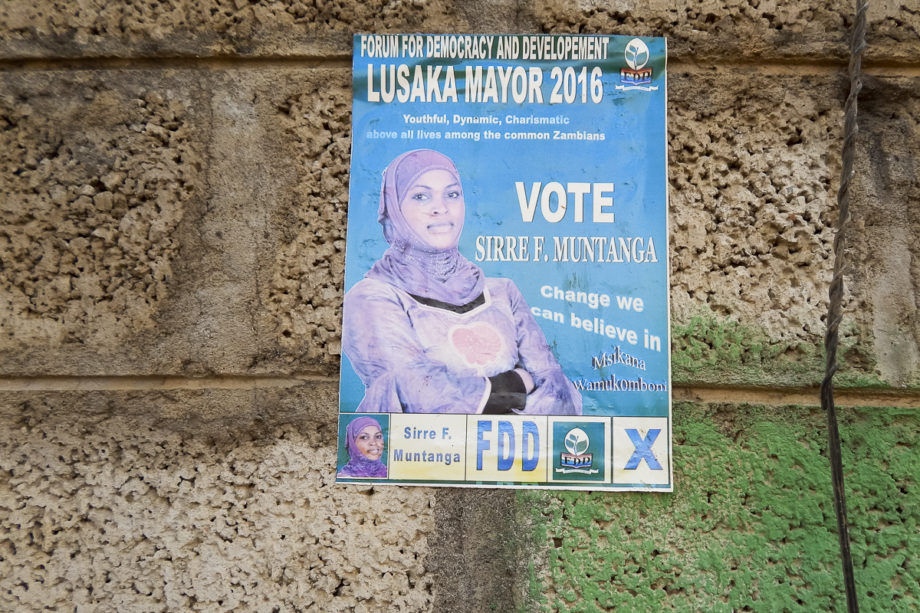 A campaign poster for Sirre Muntanga is displayed in Lusaka.

Ayami believes that women should not accept positons that undermine their roles of caring for their families.

“Islam believes for society to succeed, the family has to be built on a solid foundation, and the person that builds that solid foundation is a woman,” he says. “If a woman’s participation in politics is going to take her away from the home, then, there is a problem.”

But if a woman can manage both her duties at home while taking responsibilities elsewhere, then “there is nothing wrong with her participating in politics,” he says.

Prejudice and intolerance are long-term issues that require efforts from every leader to eliminate, Ayami says, adding that his organization supports women’s participation in leadership at all levels.

Mwanza, the political party spokesman, says discrimination against Muslims and people of other religions would end if Zambia’s declaration of being a Christian nation were revoked.

“Labeling Zambia a Christian nation and forcing people to accept Christianity as a supreme religion in Zambia has contributed to undermining other religions and discriminating (against) people of other religions,” he says.

He says his party will continue to support candidates from various religions.

Muntanga says the discrimination she faced in her recent campaign didn’t push her away from politics, but instead motivated her to continue. She plans to run for the same seat in 2021.

“I was not discouraged by the discrimination,” she says. “In fact it has made me stronger. It gave me a platform to tell people more about Islam, and I feel if many Muslims would participate in elections, the discrimination would soon be a thing of the past.”