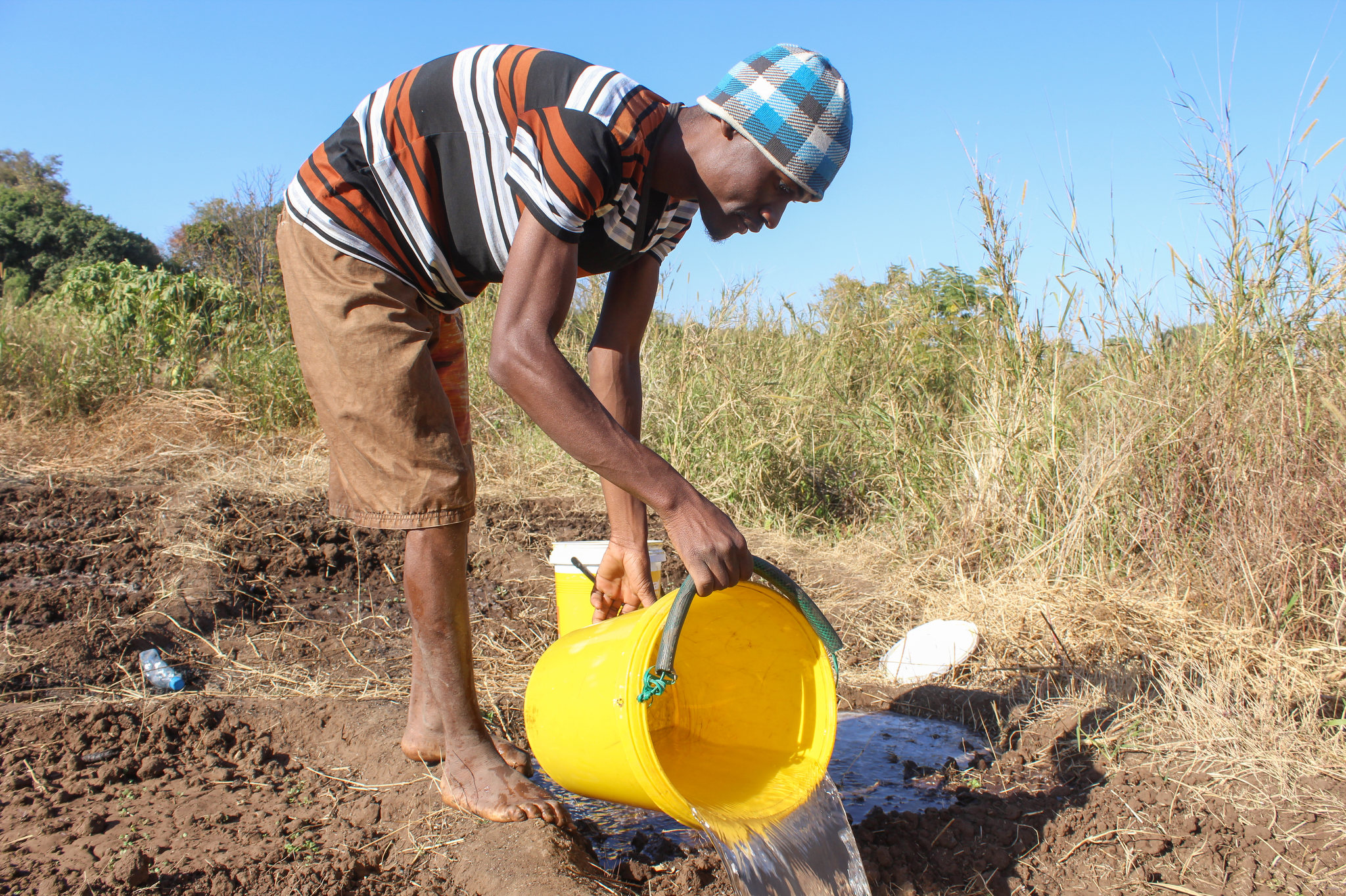 LUSAKA, ZAMBIA — In 2021, Patrick Kasoka had a devastating harvest of maize, Zambia’s staple food. Parts of Chongwe district, a rural area east of Lusaka, had experienced a long dry spell. As a result, his crops withered, and his harvest was dismal. To supplement his rain-fed crops, the farmer started growing vegetables in a small garden which he could irrigate and sell.

At first, Kasoka relied on a gas-powered water pump for easy irrigation. However, an increase in fuel prices has forced him to pack up his pump. Now, he waters the plants manually with buckets of water from a nearby river. Every day, he carries two buckets of water at a time to the garden — which is about 300 meters (984 feet) from the river — for almost two hours. By the time he covers the whole plot of land, he is exhausted. He has had to reduce the size of his garden, his only source of livelihood, from 4 acres to 1 acre, consequently reducing his income.

“I can’t manage to water a bigger portion with buckets,” Kasoka says.

Kasoka is one of Zambia’s 1.5 million smallholder farmers, who contribute about 80% of the domestic food supply. Over the years, erratic rainfall, floods and drought caused by climate change have reduced their rain-fed yields and threatened food security in the country. Those like Kasoka who depend on motorized water pumps to irrigate their crops have been even more devastated by soaring fuel prices. Some have abandoned pump irrigation, leading to even more reduced production. Experts warn the country’s economy could crumble if nothing is done to cushion smallholder farmers against the combined shocks.

Just over one-third of households in Zambia reported moderate food insecurity in 2021, compared to 22% in 2019, according to Indaba Agricultural Policy Research Institute, a Lusaka-based research group. The food insecurity is partly due to rainfall trends, which have been extremely unpredictable. This problem is likely to worsen in parts of the country, as historical models show Zambia’s southern half getting drier, while the northern half gets wetter over the years. 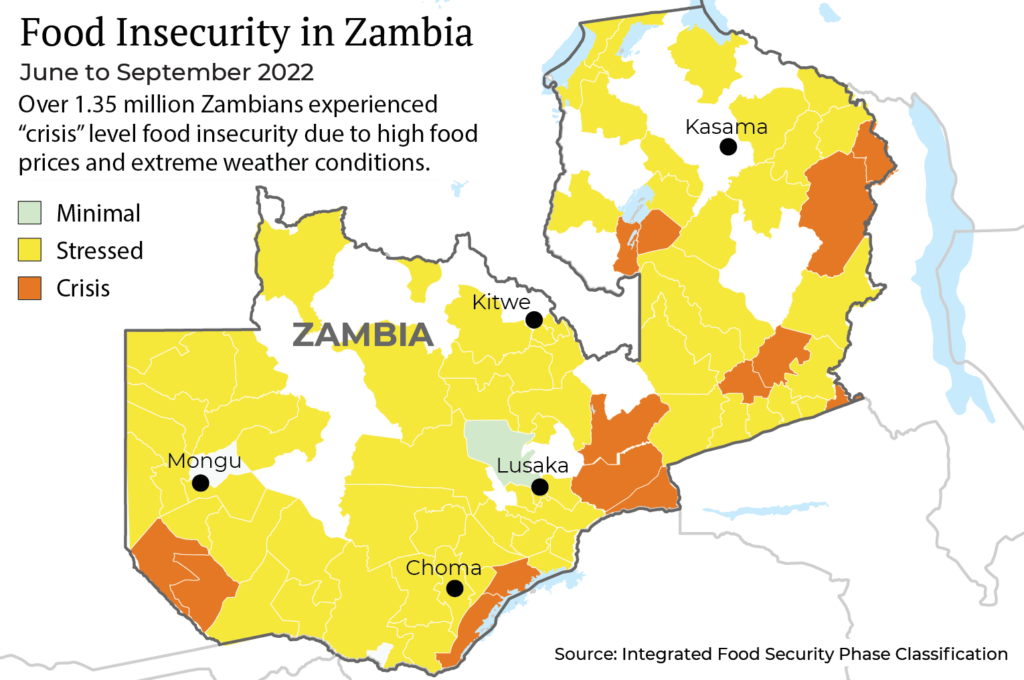 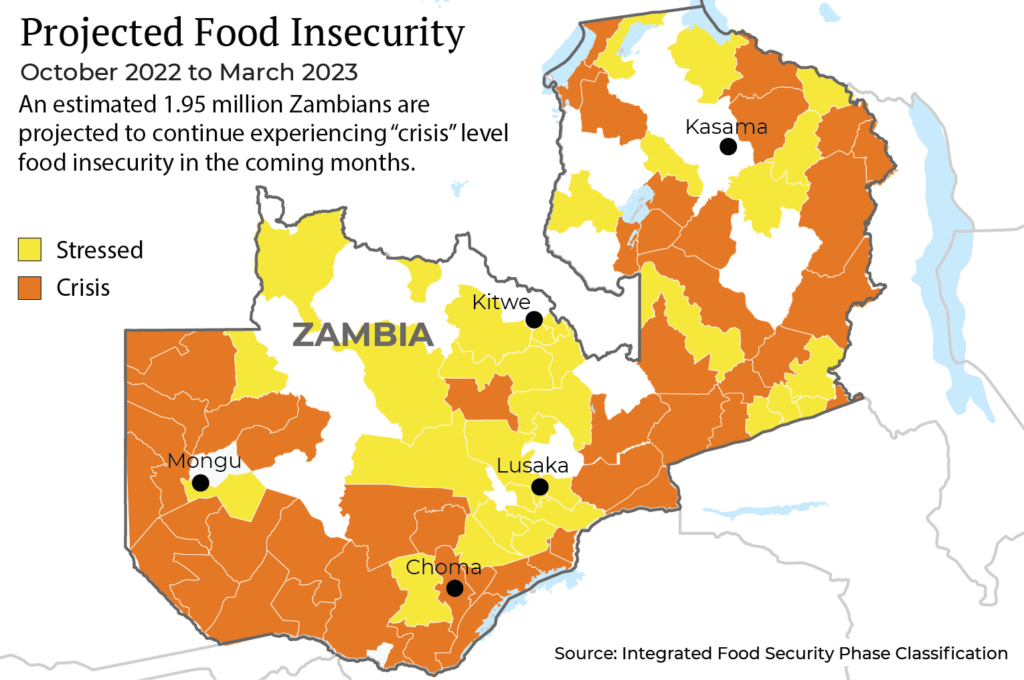 In recent decades, the country has experienced moderate to severe droughts. The 2018-19 drought wreaked damage on food security, water supplies and hydroelectric power, says Asher Siebert, senior staff associate at Columbia University’s International Research Institute for Climate and Society, in an email to Global Press Journal. Some provinces have dealt with multiple failed rainy seasons in the last decade as well, compounding the problem.

To cushion themselves against poor yields, some smallholder farmers have turned to irrigation. In fact, the government has been urging farmers to switch to irrigation for food security. 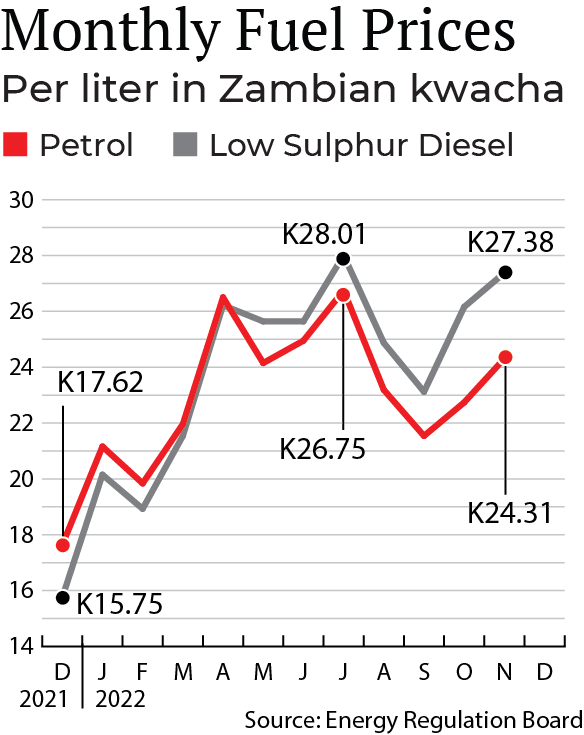 While the majority of farmers turning to irrigation use water buckets, some use fuel pumps. Electric pumps aren’t much of an option since only 4% of the rural population in Zambia has access to electricity.

The Energy Regulation Board, a statutory body that regulates energy in the country, then adopted monthly fuel price reviews. In the last 11 months, fuel prices have been raised eight times.

David Siamundia, who used a fuel pump the last three years, says the increase in fuel prices meant he could no longer afford its use. Now, his work has become too strenuous, and his vegetables are withering. “It is difficult to water my vegetables with a bucket because I only have one hand,” Siamundia says. “I depend on my garden for my daily needs. I used to sell a lot of vegetables to my community but not anymore.”

Victor Chisanga, who depends entirely on farming, says the monthly fuel price changes most affect the poor, who are already struggling to survive.

“I am still using a fuel pump, not because it’s affordable but because it is convenient,” says the father of eight. “My profits are dwindling because production cost is very high. Sometimes I just count my losses.”

A major cause of the increase in fuel prices is the war between Russia and Ukraine, says Energy Regulation Board chairperson Raynolds Bowa. Although Zambia doesn’t import much fuel from Russia or Ukraine — its major suppliers are Seychelles, South Africa, Tanzania, Mauritius and United Arab Emirates — globally fuel prices have been skyrocketing, which experts have blamed on the war. 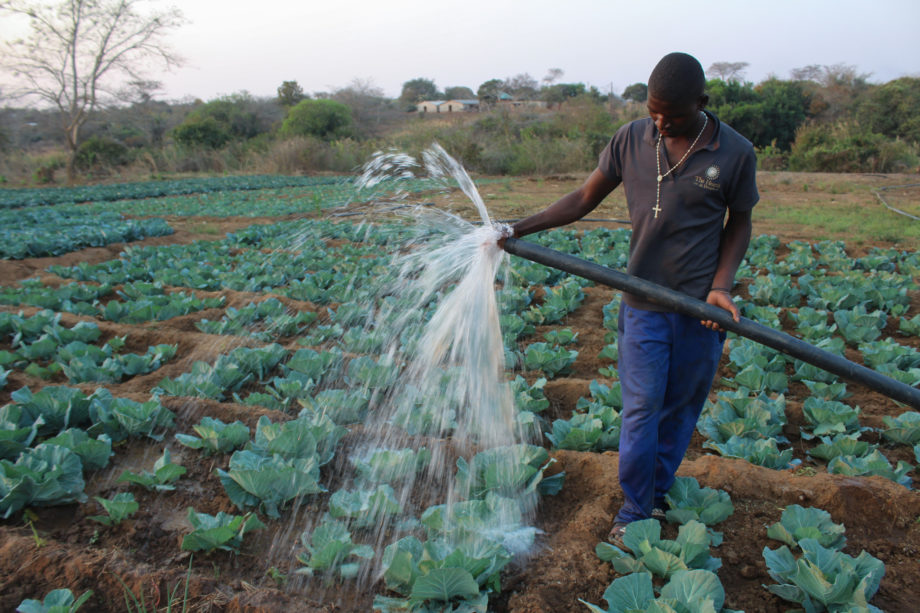 Victor Chisanga waters vegetables in Chongwe, Zambia. Chisanga says produce sometimes goes to waste at the market because of high prices, which he blames on the high cost of fuel.

To mitigate the effects of the high cost of fuel, agriculture minister Reuben Mtolo Phiri says smallholder farmers should apply for funding for various activities including irrigation through the Constituency Development Fund, a fund meant for the development of local communities.

However, Kasoka says information on how to apply has not been made available to farmers. Siamundia agrees.

The ripple effect of fuel increases on agriculture does not just threaten food security but employment as well. Zambia’s agricultural sector contributes approximately one-fifth of the country’s gross domestic product and, combined with mining, it employs more than three-quarters of the working population, according to United Nations figures.

Albert Mwela, a farmer in the Chinyunyu area east of Lusaka, says he has had to lay off two of his three workers. “Right now, I only need one,” he says. Kasoka also had to let go two workers and now works on his farm alone.

If the government doesn’t do something to stop a further increase of fuel prices, the effects will be devastating on the economy, says economist Frank Kayula. Kayula, who is also the executive director of the National Association for Smallholder Farmers in Zambia, says agriculture is a bedrock of the economy and, if neglected, can cause the economy to crumble. 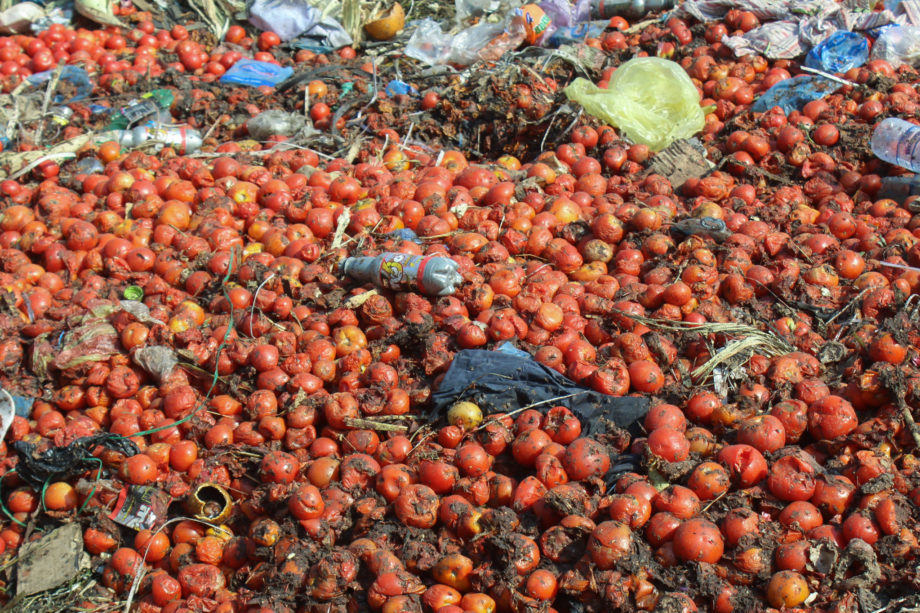 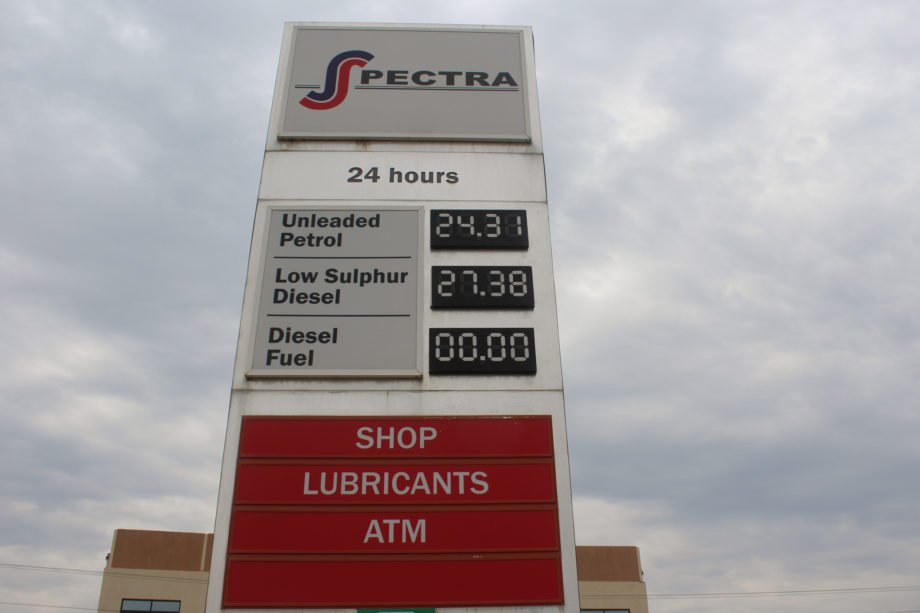 Tomatoes that have gone bad at the Soweto Market in Lusaka, Zambia. The price of fresh produce is increasing due to the high cost of production. Farmers point to high fuel prices.

Although the government plans to stabilize fuel prices, says energy minister Peter Kapala, it’s stymied by its debt. “There are also external forces involved. But we are working on strategies that will help mitigate the prices,” Kapala says. He did not provide details about the strategies.

Meanwhile, Kasoka’s former farmhand, Rabson Ngungu, says he is finding it hard to feed his family after losing his job. “[The price] of food on the market is high and I have no income,” Ngungu says.

Higher food prices are blamed on the higher cost of production. Reducing fuel prices, Ngungu says, would solve all his economic problems.