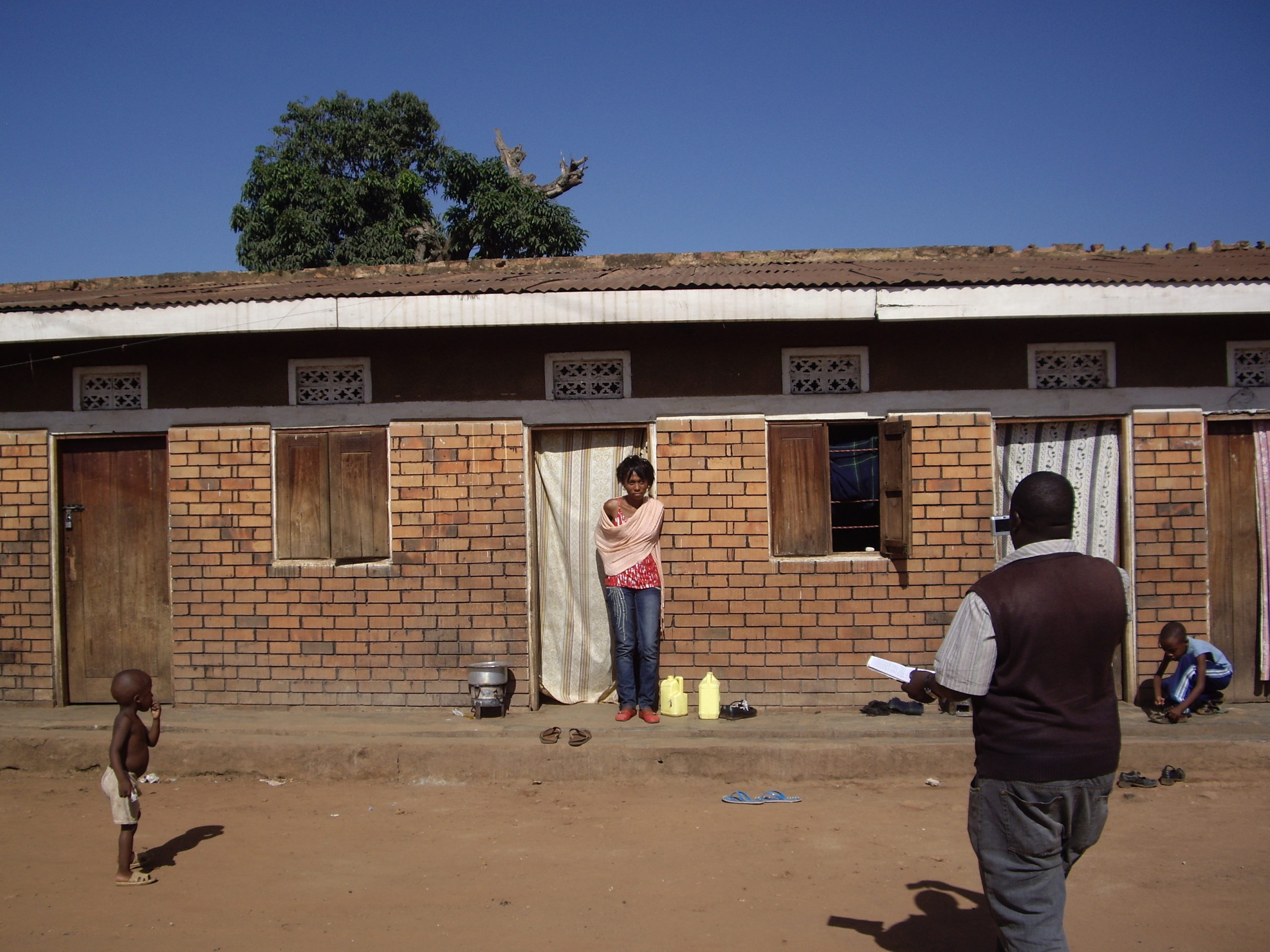 KAMPALA, UGANDA – Kapinga Bennedict, 25, is a refugee from the Democratic Republic of Congo, DRC.

Bennedict fled her country in 2007 after an attack by Congolese rebels that left her raped, her mother dead and her sister disappeared.

Bennedict says she had just completed school for the year and was home with her mother and sister, when rebels attacked her home. Her mother, a restaurant owner, had long provided food to warlord Laurent Nkunda and his men on credit. One day the soldiers who had just eaten in their restaurant stormed into their home and raped Bennedict, her mother and sister. Bennedict says all three lost consciousness. Rescued by neighbors and brought to a nearby hospital, Bennedict woke up to the news that her mother had died from injuries she suffered during her violent rape and her sister had disappeared.

The neighbors decided Bennedict should leave the country. The rebels likely believed that all three women had died in the attack. If they heard she was still alive, Bennedict says they would have returned to kill her. It was agreed that a neighbor employed by an international organization would bring her across the border into Uganda where she would be safe.

The rebel group that Bennedict fled are the rebels of warlord Laurent Nkunda, a former army general in the Congolese government who waged a deadly rebellion in the Congo from 2004 to 2009. Nkunda claimed he was protecting the Congolese Tutsis from what might have turned into a genocide similar to what occurred in Rwanda in 1994. Nkunda, who took part in the Rwandan war in the 1990s, was arrested last year when he crossed the Rwandan border.

Like Bennedict, hundreds of thousands of Congolese people have been raped, displaced or killed during by Nkunda’s men. He was indicted for war crimes in 2005 and is currently under investigation by the International Criminal Court.

For the last three years, Uganda has become an increasingly popular destination for central and east Africa’s refugees. Prior to the bombings that killed more than 70 people here this week, Uganda has enjoyed a period of growth, peace and prosperity. Today, UN estimates reveal that135,474 refugees call Uganda home, making it the largest number of refugees in any country in eastern and central Africa. The majority of Uganda’s refugees come from the Democratic Republic of Congo, Rwanda, Ethiopia, Burundi, Kenya, Somalia, Eritrea and Sudan.

Despite the fact that many seek a safe haven here, life in the camps is filled with hardships. Sexual violence and exploitation are on the rise for women in the camps. Resources and staple goods are scarce. As a result, many refugees here have left the camps. Uganda is home to tens of thousands of urban refugees, many of whom are undocumented and under the radar.

Several months ago, Belize, 20, watched as Congolese rebels killed her parents. A few days later, she was gang raped by the same rebels.

As neighbors learned of her rape, the whole community began to fear for its safety. “The news of my rape spread in our neighborhood. My neighbors said that I was now the wife of [the rebels] men and I would bring them more trouble. They threatened to burn us in our own house to rid them of the trouble we would bring,” she says, clutching a pink scarf tightly around her. When a government soldier offered to marry her for protection, she declined his advances. “He too threatened to kill me,” she says. With nowhere else to turn, Belize, who asked that her last name not be revealed, and her siblings fled their home in eastern Democratic Republic of Congo and crossed the border into Uganda.

Belize and her siblings eventually found their way to Kampala, “on the goodness of a good Samaritan who paid our bus fare,” Belize says. In Kampala, they reported to the Old Kampala Police Station to register their presence. Their documents were passed on to the Office of the Prime Minister, OPM, where each member of her family received an asylum seeker document, valid for three months. According to sources in the OPM, that document is constantly renewed until a decision to grant an applicant refugee status is made. The process takes between three and six months, as the Refugee Eligibility Committee convenes only when there are “a substantial number” of applicants.

Many refugees fleeing the Congo received prima facie refugee status, also referred to as blanket refugee status. Status determinations are made based on nationality and the events happening in the applicant’s country of origin. Refugees are asked to live in the designated refugee settlements. They are entitled to a small plot of land, measuring 50 by 100 feet.

Life in the refugee settlements is a routine of rations. Refugees are sustained on the food ration cards, which are their lifelines. The food provided includes maize meal, beans, salt, sugar and cooking oil. The allotted quantities depend on the size of family. Non-food items like plastic sheets, blankets, and cooking utensils are also provided.

The process of registration and arrival are arduous, so many become members of religious institutions run by fellow refugees and Ugandans. Belize and her siblings were welcomed by members of Victory Church in Kisenyi, run by both Congolese and Ugandans. Attendance at the church introduced them to the community. But despite their new social network, life in the camp was hard.

The challenges for women in refugee camps are constant. According to UNHCR, the UN refugee agency, new evidence reveals that sexual violence and exploitation among refugees in Uganda is on the rise. Eunice Owiny, a counselor with the Refugee Law Project in Kampala, says, “Cases of sexual and gender based violence in refugee settlements and communities is extremely high among single women, widows and young girls.” Owiny says that reporting mechanisms are flawed and are affected by stigma and the fact that victims receive no security after filing a compliant. Camp advisors say the real number of victims is unknown within the refugee settlements, but confirmed that an average of three cases of sexual violence are reported to the police or refugee welfare committees every week. For refugees who choose to leave the camps to try their hand at life on the streets of Kampala, statistics of sexual violence and exploitation are unknown.

For the thousands of refugees who abandon life in the camps, finding employment in Uganda can be a challenge. Language barriers, legal status and low wages often force refugees into a cycle of poverty.

Coming from the DRC, a French speaking country, both Belize and Bennedict, say it was difficult to find gainful employment in Uganda, an English speaking country. When both women left the camps, the moved into low-income neighborhoods in Kampala. Both women report that they were treated as outcasts because they did not speak English or the local dialect.

Finally, Belize found a job working as a waitress in a low budget restaurant. But Belize says she was fired after she called in sick too many times. She says she suffers from anxiety, chest pains and general poor health.

Bennedict too struggled to find and maintain employment in Kampala, Uganda’s capital city. “You know [working in] these low paying jobs you do not earn leave at all. So you either fall sick or resign if you want to rest,” Bennedict says.

Bennedict’s first job in Kampala was a cleaning job where she earned 40,000 Ugandan shillings, $18 USD, per month. Soon, she says her manager took an interest in her and taught her English. Learning English enabled to get a job as a waitress at a high end fast food restaurant where her earnings increased to 150,000 shillings, $66 USD, per month.

Refugees often get permission to leave the refugee settlements to come to the city for medical treatment and do not to return. Seniya Bekele, 27, an Ethiopian refugee left the refugee settlement to come to Kampala for treatment and decided to stay and work in the city to make ends meet so that she could feed and educate her two children. “My body was failing me. I have a kidney problem. So, I got permission to leave the camp and come to Kampala for a short treatment. Then, I refused to return to the camp. I decided I would stay on here and try to make a living,” Bekele says.

She, like Belize and Bennedict, says she had to learn English in order to survive. In Ethiopia, she was a musician and cultural singer of the Oroma people, one of the tribal groups in the country.

Life in the City and Looking To the Future

Despite the hardships of their flight, life in the camps and the long-term effects of the sexual violence they endured, these women continue to struggle to rebuild their lives. The political and military realities in their home countries are still precarious. Despite the recent bomb attacks by a Somali rebel group in Uganda, Belize says she will continue to build her life and her home here. While Bennedict longs to return to her homeland.

Today, Belize lives with another Congolese refugee whom she met at church. She is back at work and her siblings, all of whom are under the age of 15, are in school thanks to a group of workers with the Refugee Law Project who paid their school fees. Belize says they are happy in Uganda.

Kapinga says she wants to go home someday. “I wish for peace [so I can] return to Congo,” she says. Despite her hardships, Kapinga is a woman of endless goals and dreams. “I would like to be a politician and I want to open up my own business and I dream of putting up a boarding school in my country. You know, we have suffered a lot. I also want to open up a photo studio back home.” She is currently taking a photography course at Makerere University, Uganda’s leading university.